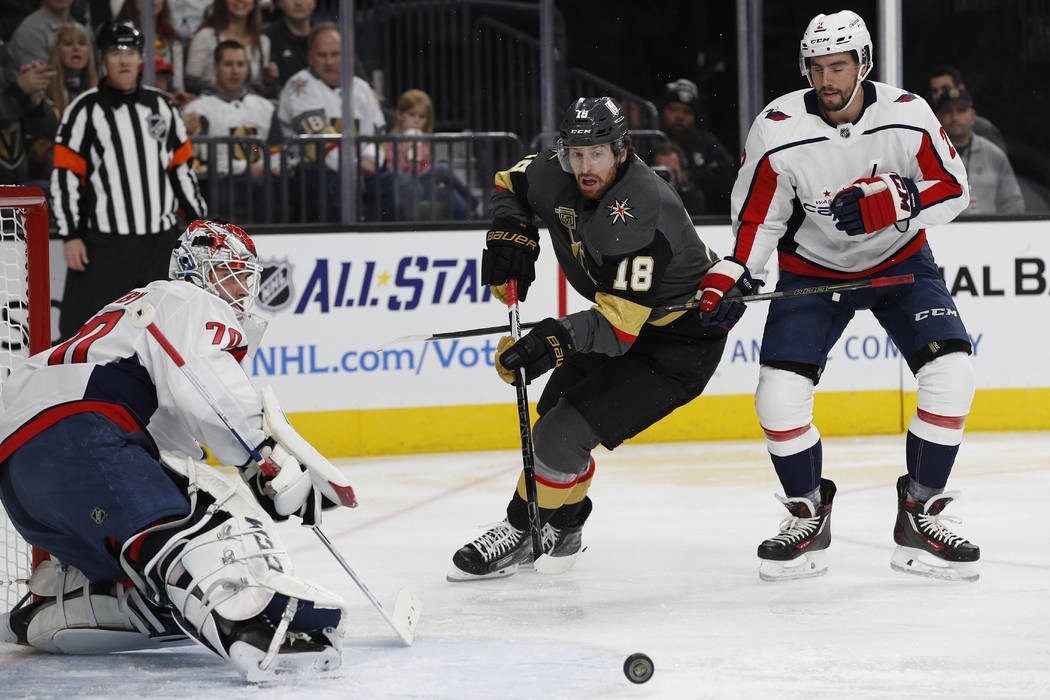 A look at the matchups between the Golden Knights and the Washington Capitals and who has the edge in the Stanley Cup Final:

The Capitals boast the NHL’s leading goal scorer in left wing Alex Ovechkin, who had 49 goals. The Knights counter with center William Karlsson, who had 43 goals and was third in the league in that category.

But both teams boast more than a single top gun. The Capitals have threats in Evgeny Kuznetsov, Nicklas Backstrom, T.J. Oshie and Lars Eller. In addition, Jakub Vrana, Devante Smith-Pelly and Tom Wilson are all capable of finding the net. The Caps also got some unexpected offense in Game 7 of the Eastern Conference Final as Andre Burakovsky scored twice in the 4-0 win over Tampa Bay to send Washington to the Stanley Cup Final.

Yet the Knights are one of the teams that can match Washington’s offensive depth. Karlsson’s linemates Jonathan Marchessault and Reilly Smith have put up points throughout the playoffs, and Alex Tuch has provided a spark to Erik Haula’s line along with James Neal.

Cody Eakin may not be scoring much, but he has played his best hockey during the playoffs. The fourth line of Pierre-Edouard Bellemare, Ryan Reaves and Tomas Nosek were a key to the Knights defeating Winnipeg in the Western Conference Final.

The wild card? David Perron. Yes, he has yet to score a goal in the postseason. But he has seven assists and can be used on Haula’s line, where he played most of the season, or with Eakin, who he has skated with most of the playoffs. That kind of flexibility is big for coach Gerard Gallant.

Washington has the single biggest offensive threat in Ovechkin. But the sum of the Knights’ parts is greater.

The Capitals have a defensive corps that fits in nicely with today’s NHL style of play. They’re fast, physical, can transition quickly and join the rush and are adept at blocking shots. John Carlson is outstanding, one of the best in the league, while Dmitry Orlov and Matt Niskenen are both excellent two-way defensemen. Throw in Brooks Orpik and Michal Kempny and that’s a solid, well-rounded group.

The Knights have shown an ability to block shots, too. They will be tested by Washington’s offensive firepower. When these two teams played each other in the regular season, it was Schmidt who drew the assignment of watching Ovechkin. In two games, Ovechkin had just four shots on goal and was kept off the scoresheet.

Braden Holtby has found his groove and was impressive in posting consecutive shutouts to close out the Lightning. Remember, he started the playoffs on the bench in Game 1 against Columbus as coach Barry Trotz went with Philipp Grubauer. But Holtby has been between the pipes since then and sports a 2.04 goals-against average with a .924 save percentage.

Still, he’s second-best in this matchup.

Marc-Andre Fleury is playing the best hockey of his career and seeks a fourth Stanley Cup ring. Fleury allowed just 10 goals in five games during the Western Conference Final. Overall, he has a 1.68 GGA, a .947 save percentage and four shutouts. And while he has played every second of the Knights’ 15 games, he has been able to rest between each series.

The Knights face a formidable power play as the Capitals are clicking at 28.8 percent through the playoffs (17 of 59). However, Vegas has been one of the best in the postseason at stifling power plays with a kill rate of 82.5. The Knights rotate three sets of penalty killers and all have been effective, particularly Bellemare and Nosek.

The key will be watching Ovechkin at the left circle and Backstrom from behind the net where both generate plays and are most dangerous.

The Knights have scored on only 17 percent of their power play opportunities in the postseason and Washington’s penalty kill effectiveness is 75 percent. Capitals center Jay Beagle is one of the better penalty killers in the league.

For a guy who reportedly is out the door, Barry Trotz is sure boosting his stock as a free agent should the Capitals not re-sign him. He has his team playing at a very high level right now, and they’re having fun and responding. They faced elimination against Tampa Bay and responded with two big efforts.

Gerard Gallant has a Golden touch. Every move he makes seems to work. He has done a great job of keeping his team fresh and has played all but one of his available players during the postseason.

The Knights had home ice advantage in the first two rounds, yet they clinched both series on the road. Gallant has said home ice helps if there’s a Game 7. But as Washington showed Wednesday in Tampa, once the puck is dropped, it doesn’t matter.

Gallant’s not a big mix-and-match guy, but you can bet he’ll have Schmidt on the ice whenever Ovechkin is skating.

Both teams have heavyweights who can change the game with their physical play. Tom Wilson plays on Ovechkin’s line and plays the game hard — sometimes going too far. He was suspended earlier in the playoffs for a hit to the jaw of Pittsburgh’s Zach Aston-Reese. The Knights can answer with Ryan Reaves, who has played hard but smart since Gallant put him in the lineup for Game 6 against San Jose and left him in for the entire Western Conference Final. These two heavyweights have mixed it up before when Reaves played for St. Louis.

Faceoffs, which are an important part of the game, are close between these teams. The Capitals are winning 49 percent of their draws while the Knights are at 47.8 percent for the postseason.