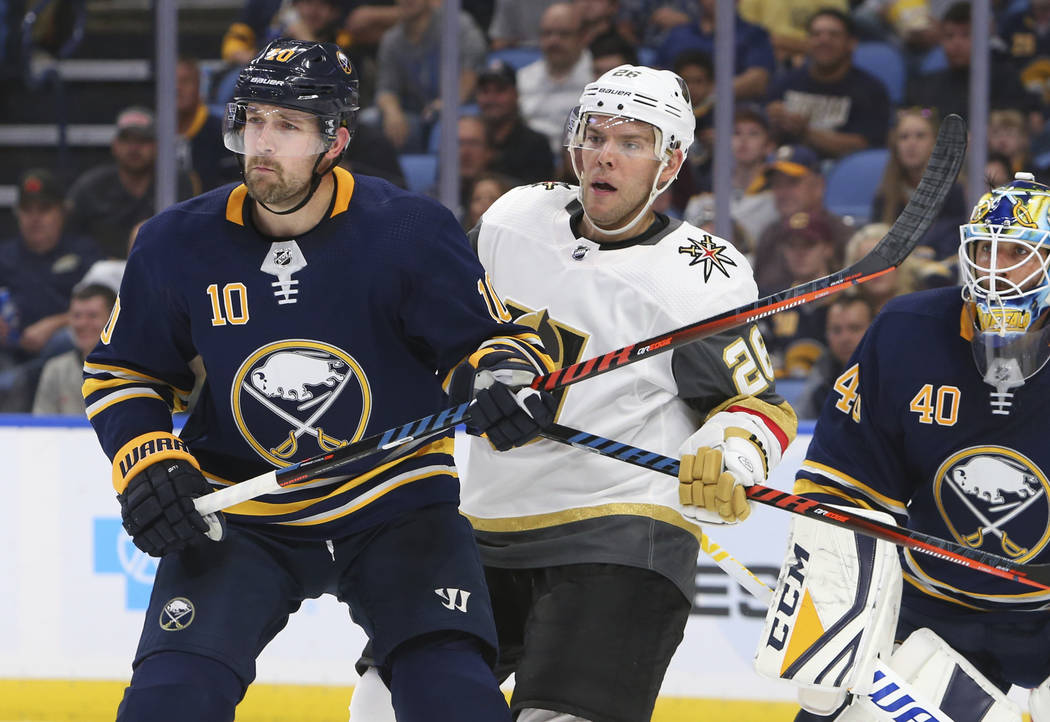 First, the bad: center Paul Stastny will be sidelined up to two months with a lower-body injury.

“Stastny is going to be longer than we thought,” coach Gerard Gallant said.

Also, defenseman Deryk Engelland will not play Tuesday when the Knights host Buffalo at T-Mobile Arena and will be replaced by Brad Hunt.

Gallant said Engelland is day to day after leaving in the second period of Saturday’s victory at Philadelphia with an undisclosed injury.

That’s actually a positive development because Engelland appeared to be in a considerable amount of pain as he skated to the bench.

“Everything came back good,” Gallant said.

Winger Alex Tuch skated in a noncontact jersey on his own following practice at City National Arena, another step in the right direction in his recovery from a lower-body injury.

Gallant ruled out Tuch for the next two games and he will be re-evaluated at that point.

Stastny was injured late in the third period of the Knights’ 4-2 loss at Buffalo on Oct. 8 when Sabres forward Jack Eichel crashed into his leg while trying to block Stastny’s shot.

Stastny, who signed a three-year, $19.5 million contract as free agent in July, did not have a point in the first three games.

“When you win, you play real quick and play real fast,” Gallant said. “There’s no hesitation in our game, and right now, we’ve got some of that. We know it as coaches, we know it as players. We’ve just got to be better. Got to work a little harder, each guy.”

Goaltender Marc-Andre Fleury was breaking in a set of gold legs pads with matching blocker and glove during practice. twitter.com

Fleury said he plans sticking with his white equipment and will wear the new pads during “special” games.

“It won’t be an every-day deal,” Fleury said. “I just thought with the Golden Knights, now I should put a little more gold in my colors.”

The latest addition to the decor at City National Arena were replicas of the Knights’ Pacific Division and Western Conference banners hanging from the ceiling. twitter.com

In the middle of those two was a reproduction of the “Vegas Strong” banner with 58 stars honoring the victims of the Oct. 1, 2017, shooting on the Strip.

“It’s a practice rink, but every time we are leaving for at least more than four days there is something brand new in this rink, in this locker room,” center Pierre-Edouard Bellemare said. “You definitely get excited to come back.”