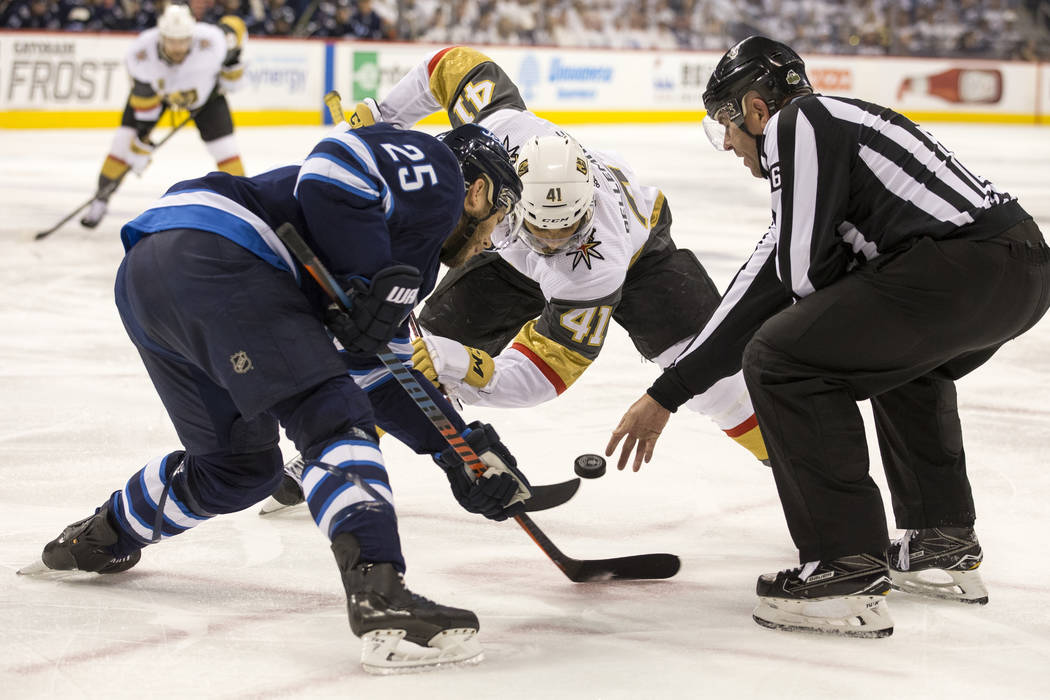 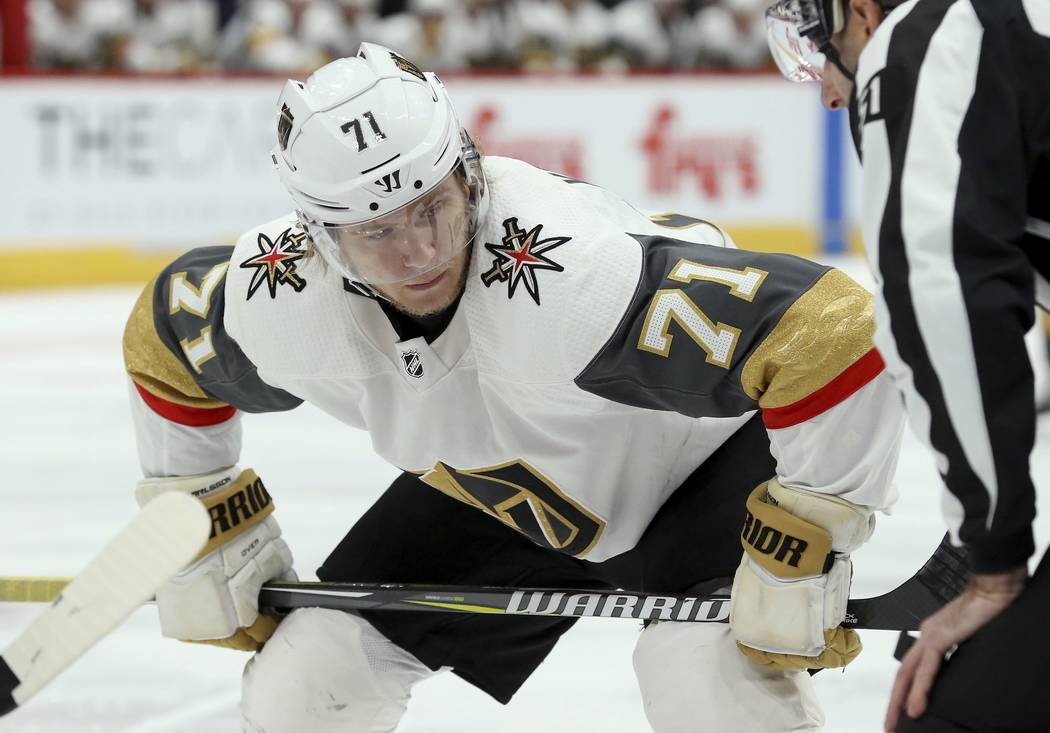 Vegas Golden Knights center William Karlsson waits for the puck to drop on a face off during the first period of an NHL hockey game against the Arizona Coyotes Sunday, Dec. 30, 2018, in Glendale, Ariz. (AP Photo/Ross D. Franklin) 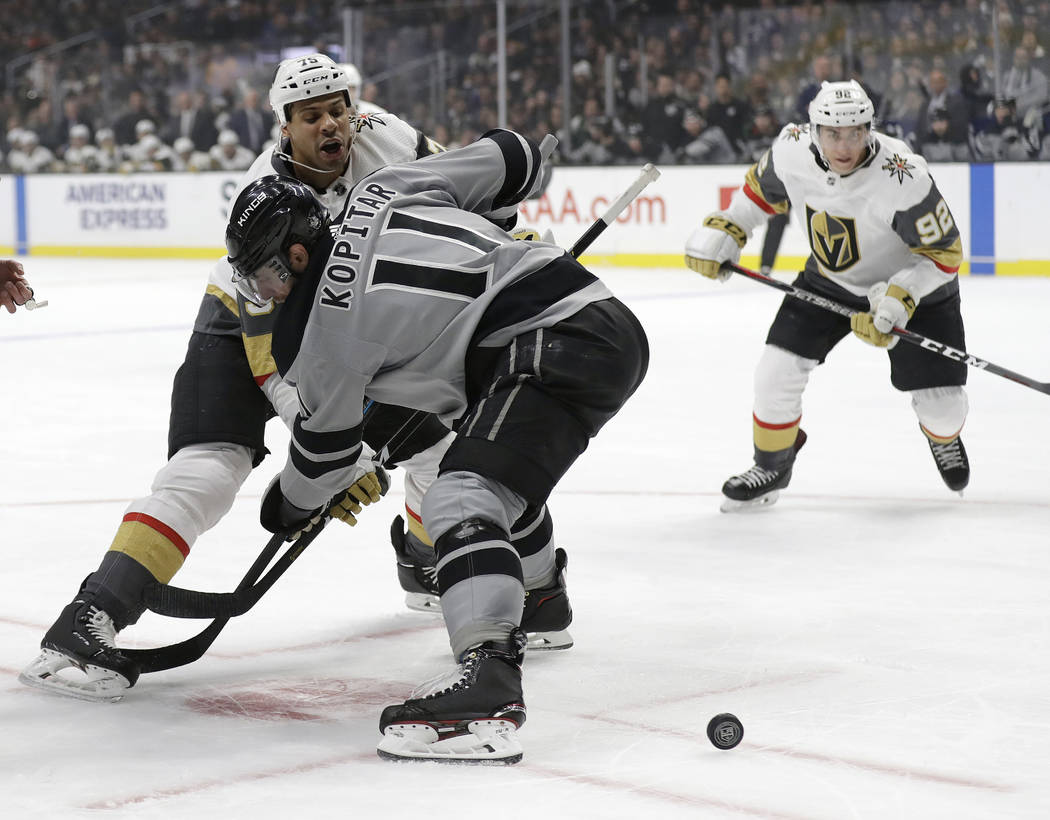 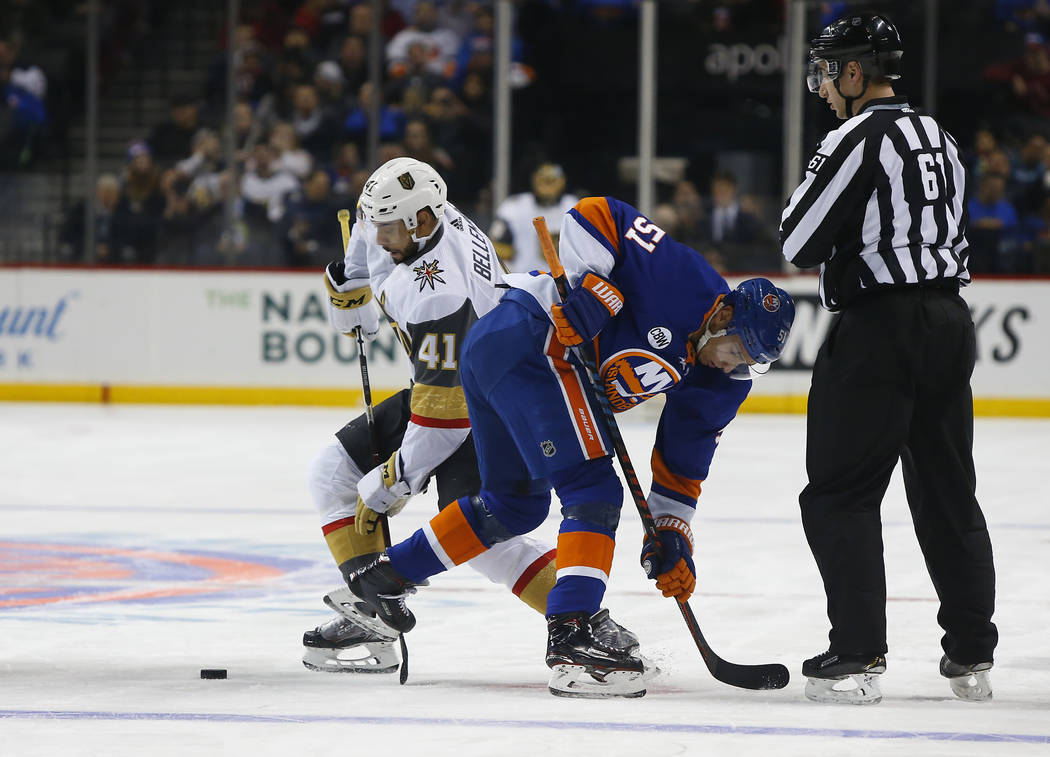 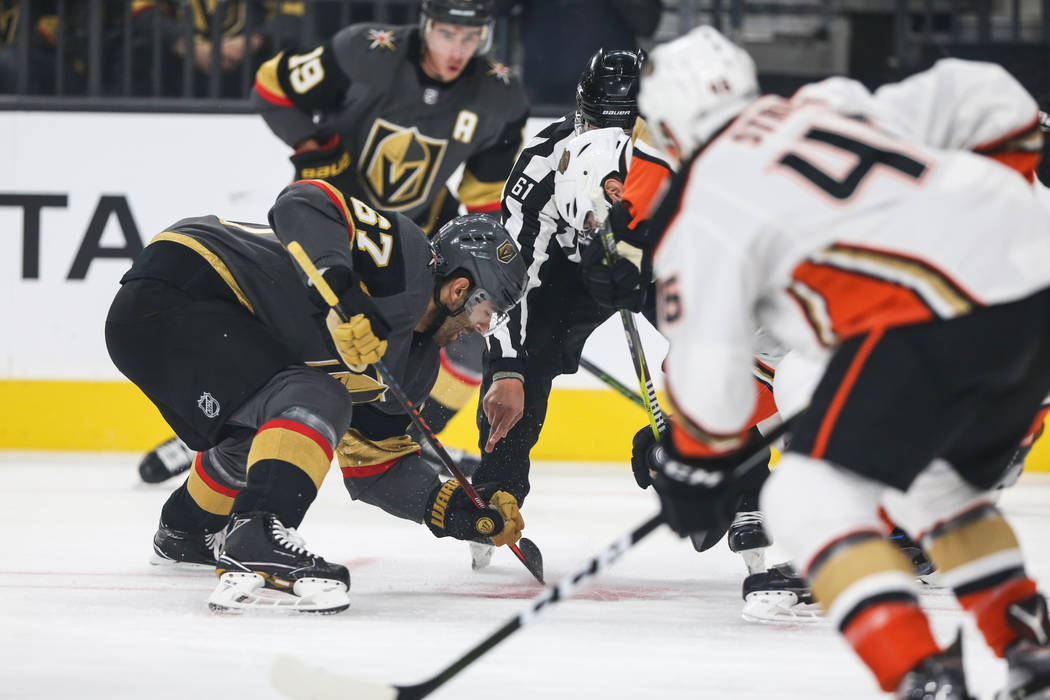 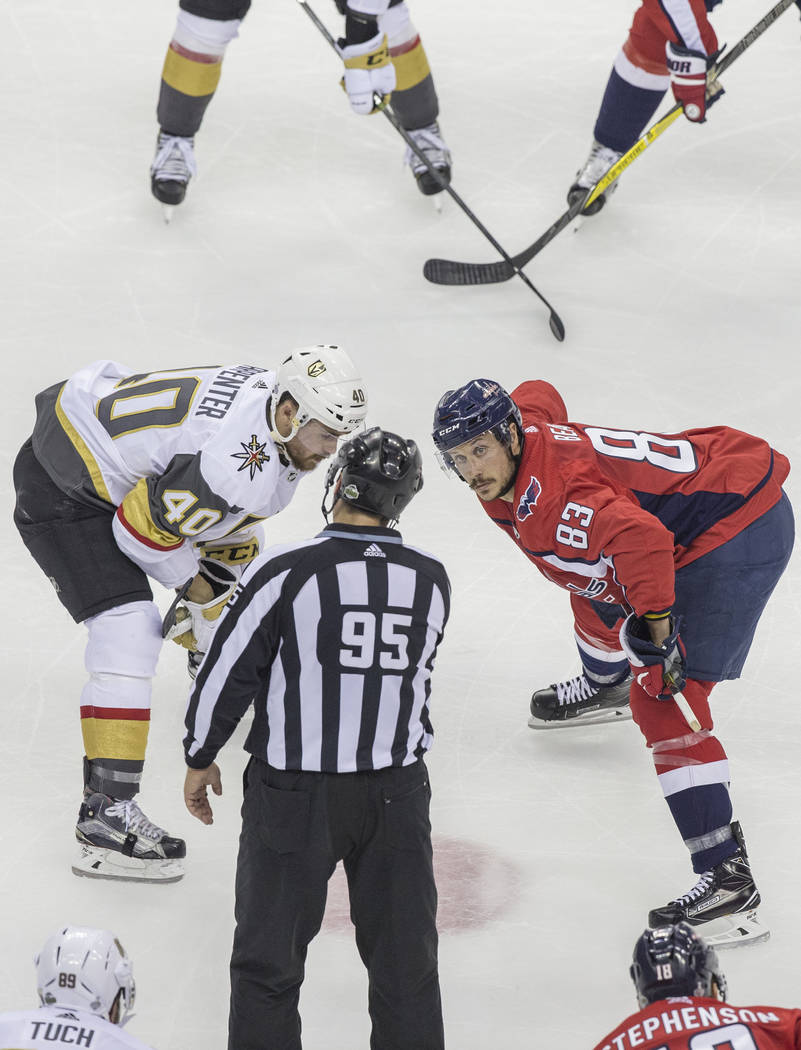 Golden Knights center Ryan Carpenter (40) gets ready for a face off with Capitals right wing Jay Beagle (83) in the second period during Game 3 of the NHL Stanley Cup Final on Saturday, June 2, 2018, at Capital One Arena, in Washington. Benjamin Hager Las Vegas Review-Journal @benjaminhphoto 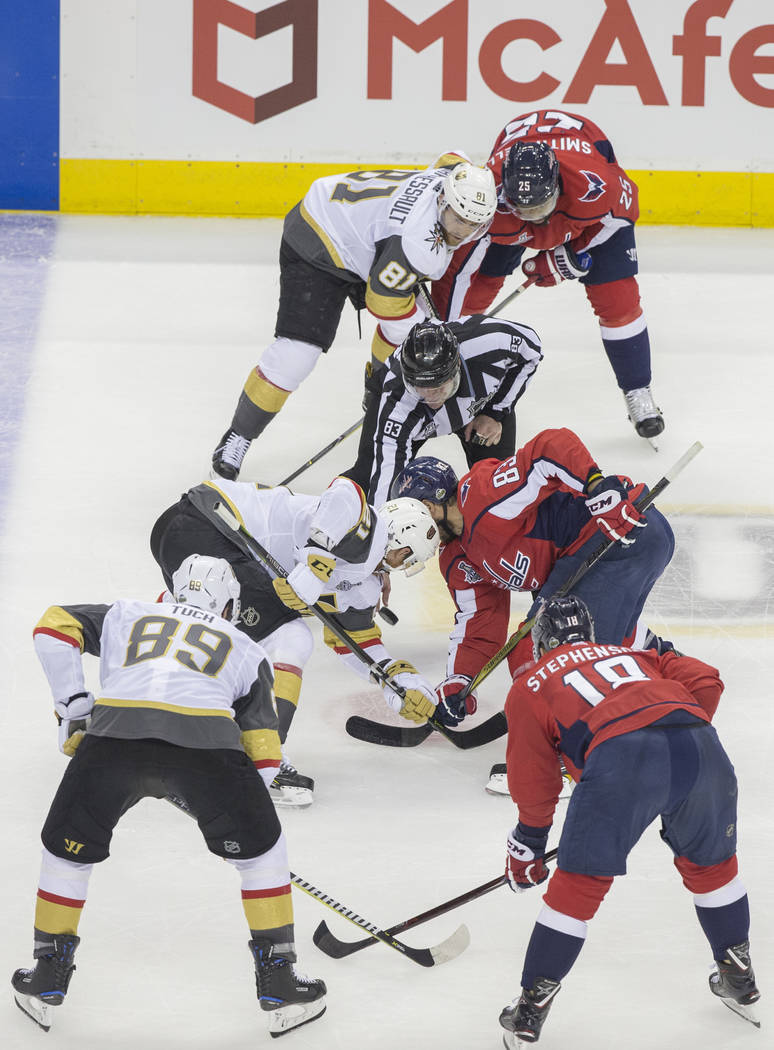 The Golden Knights and Capitals face off in the second period during Game 3 of the NHL Stanley Cup Final on Saturday, June 2, 2018, at Capital One Arena, in Washington. Benjamin Hager Las Vegas Review-Journal @benjaminhphoto

“‘Just so you know, you won’t be as good as me,’” Bellemare recalled teammate Erik Forssell telling him during the 2011-12 season. “‘I have around 20,000 faceoffs in my career; you probably have so far 500. So you’re going to have to work extremely hard to learn all the trades of it.’”

The Golden Knights center took that instruction to heart and spent years studying the subtleties and nuances that go into winning in the faceoff circle. It’s something all the Knights’ centers have done, because they say it takes a combination of technique, preparation and repetition to be good on the draw.

“It’s the difference between starting with the puck or chasing it during your shift,” Cody Eakin said. “It’s so important because the puck is so valuable. It makes the game a lot easier when you can win them consistently.”

For Paul Stastny, it all starts with the hips, ankles and knees. The Knights’ most reliable faceoff taker believes proper technique in the circle starts with a good bend to get his body low but balanced.

“When you have low position and you have good balance, it puts you in the right position to either win it off the initial drop or off the battle,” Stastny said. “Because a lot of faceoffs are both guys hit it and the puck bounces and it’s almost that second, third chance effort.

“… Instead of just being ready for the puck drop, you have to be ready for the next second and a half because more than anything that’s where the battle kind of goes on.”

If Stastny’s body is in a good position he’s better equipped to use his stick to get the puck where he wants it to go. How he does that often depends on a combination of factors like what his opponent’s dominant hand is (Stastny has trained to not have a stronger side), what part of the ice the faceoff is in (he must put his stick down first in the defensive zone, second in the offensive zone) and what his opponent’s tendencies are.

Stastny watches opposing centers from the bench to see what techniques they’re using that night on faceoffs. He also scouts them before the game on video, and William Karlsson said he does the same. Bellemare also studies his opponent so he knows how to beat them, and, just as importantly, how to lose to them.

If he knows what technique his opponent is using he talks to his wingers before the faceoff to tell them where the puck will go if he loses the draw.

“That’s why sometimes you might lose a faceoff but you still have a good pressure on faceoffs,” Bellemare said.

It’s about the refs

For Eakin, scouting doesn’t stop with the opponent.

“You catch on to certain tendencies from the referees throughout the game,” Eakin said. “After a few drops, you can tell if he’s dropping it a certain way or if it bounces a certain way when he drops it. Maybe he likes to stand closer or farther away from the circle and it allows you to get more leverage.”

All that knowledge is useless, though, if it can’t be applied correctly, and it takes a lot of practice to become consistent on faceoffs. Bellemare won 47.7 percent of his draws in his first year with the Philadelphia Flyers (2014-15) but after 3,355 NHL faceoffs he’s up to 54.8 percent this season.

It’s still nowhere near Forssell’s 20,000, or even Stastny’s 14,269 NHL faceoffs, but between the regular season and summer workouts Bellemare put a lot of time into improving his craft. And his fellow centermen agree that work is necessary to master one of the more unique skills in hockey.

“I think it’s an art in (this) particular game because it’s a different kind of game,” Bellemare said. “It’s just a 1-on-1 and some guys are unbelievable.

“I played with (Philadelphia Flyers center Claude) Giroux that I think he is the top right now and some guys, you would not believe how strong they are just by looking at the figures that they have. They just have that skill. It’s unbelievable.”