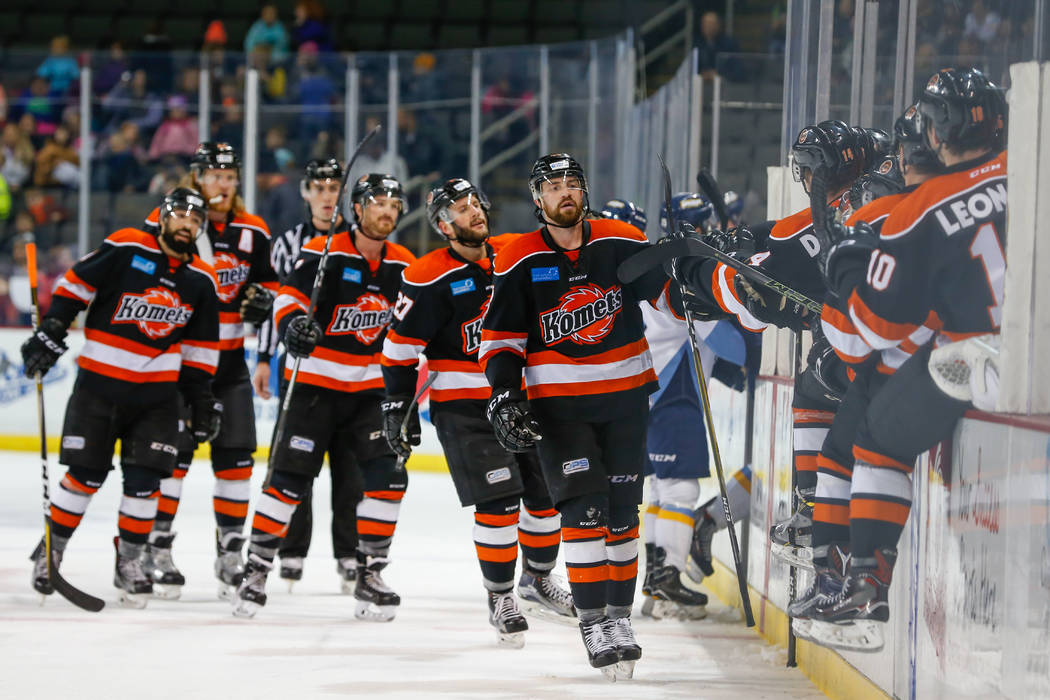 Fort Wayne Komets forward Garrett Thompson (48) receives congratulations from his teammates after scoring a goal during a regular season ECHL hockey game between the Fort Wayne Komets and the Toledo Walleye on December 6, 2017, at the Huntington Center in Toledo, Ohio. (Photo by Scott W. Grau/Icon Sportswire via AP Images)

The Golden Knights have a new minor league affiliate.

General manager George McPhee announced Tuesday that the Fort Wayne Komets are now the ECHL affiliate of the Knights. The team will now be able to send players to and from the Komets in Fort Wayne, Indiana, next season.

The ECHL is akin to the “Double-A” of minor league hockey, a step below the American Hockey League where the Golden Knights are affiliated with the Chicago Wolves.

“We are proud to add the ECHL’s Fort Wayne Komets as an affiliate,” McPhee said in a statement. “ECHL clubs play an important role in player development. Our young players and prospects will have the opportunity to grow and improve in both Fort Wayne at the ECHL level and then in Chicago at the American Hockey League level.”

The Golden Knights were looking for a new ECHL affiliate because their previous partner, the Quad City Mallards in Moline, Illinois, folded at the end of the 2017-18 season.

The ECHL only has two franchises west of the Rocky Mountains: the Idaho Steelheads, who have a deal with the Dallas Stars through 2019-20, and the Utah Grizzlies in suburban Salt Lake City, a team that signed a new affiliate deal with the Colorado Avalanche two months ago.

The Komets have been in the ECHL since 2012, when they jumped from the Central Hockey League. They previously were part of the United Hockey League and were original members (1952-99) of the International Hockey League, which at one time was the Triple-A league of the NHL.

Last season, the Komets had a one-season affiliation with the Arizona Coyotes and their AHL affiliate Tucson Roadrunners, but that deal was not extended.