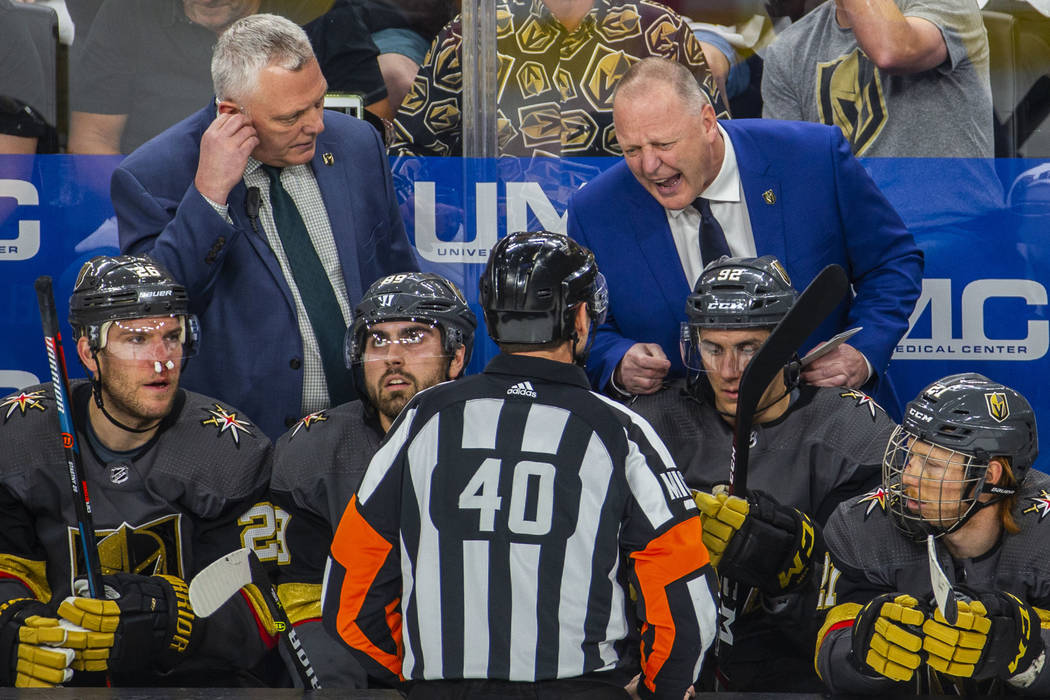 Gallant was asked after the Knights’ morning skate about DeBoer telling the media Monday that Gallant has directed a great deal of chatter at Sharks players throughout the contentious Western Conference quarterfinal series.

“I really don’t want to talk about that, but I think I’m going to have to a little bit,” Gallant said. “Because for that clown to say that in the paper yesterday, it’s not right.”

Gallant detailed two incidents where he has said anything to the Sharks players in the series.

“Logan Couture, I thought it was embellishment (on a penalty he drew late in Game 5), so I’m yelling at the referee, not Logan Couture. The other one was Game 2. Evander Kane is yelling at Ryan Reaves between the bench and Evander yelled at me and said, ‘Hey coach, when are you going to send your big guy out on the ice and play him more than four minutes?’ I said, ‘He’s played 10 minutes every game and he’s going to play a lot more.’”

According to Gallant, that’s the beginning and ending of any communication with Sharks players during the games.

“Those were the two times. If I’m going to be a chirper and a loudmouth, I think people know me as a coach and respect me as a coach. If he’s going to yap about it, that’s a little unclassy for me.”

DeBoer said Monday it was “ridiculous” that Gallant was chirping at Couture in a series that seemed to have calmed down in the last two games.

“I don’t know if it works in our favor,” he reportedly said. “I mean, there’s still chatter. Their coach is chattering. He’s probably doing the most chattering. He’s talking to our players constantly during the game, which I haven’t seen before.

“That’s probably where most of the chatter’s coming from now. The players are playing.”

Couture backed up his coach’s claims.

There’s not many (coaches) that will yell at players.” he said. “But we’re in the Stanley Cup playoffs. If they think this is going to help them win, let them do it.”

Pirri gets the call

Brandon Pirri started at left wing on the third line with Cody Eakin and Alex Tuch for the first postseason action of his NHL career.

Pirri had been a healthy scratch in the first six games of the series.

He started in a spot normally occupied by Tomas Nosek, who played center on the fourth line in place of Pierre-Edouard Bellemare.

It’s unclear if Bellemare was injured. Gallant said Tuesday morning he had several “gametime decisions.” He told reporters Monday he was waiting for a health report from the training staff before the team left for San Jose.

Sunday’s night’s double-overtime game between the Sharks and Knights was the most-watched first round Game 6 in NBC Sports history.

It was also the second-most watched first round Game 6 in cable history, trailing only the 1999 matchup between the Penguins and Devils, according to a tweet from NBC PR.

The 1.354 million total audience delivery number made it the most-watched cable game of the 2019 playoffs.

Game 6 also did 13.2 million live streaming minutes for NBC, the most live minutes ever for a first-round game.