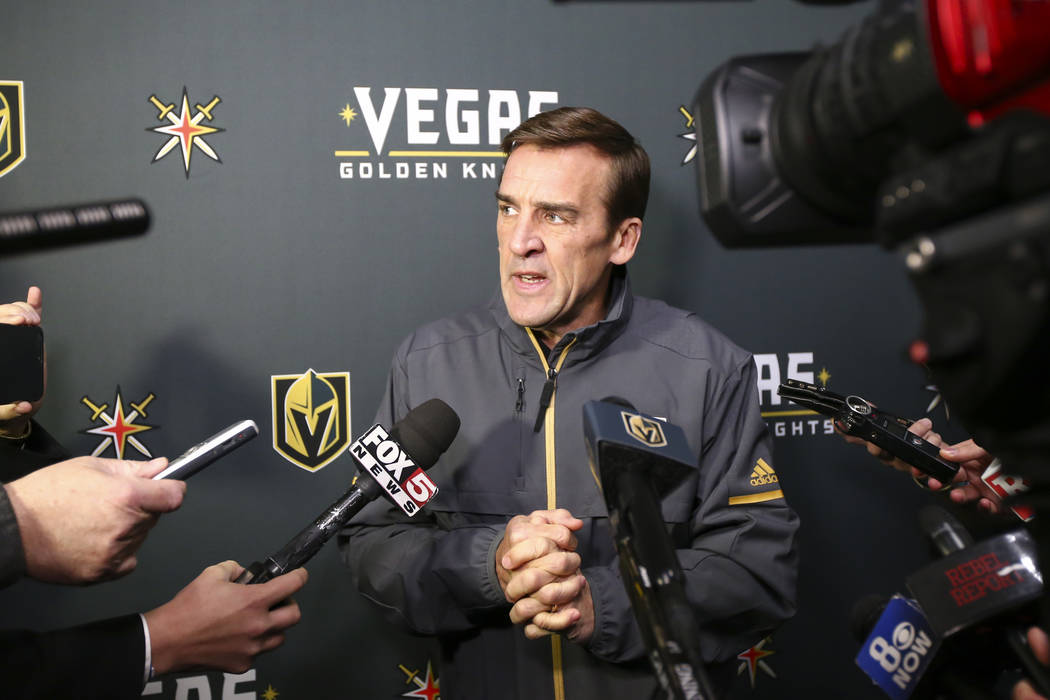 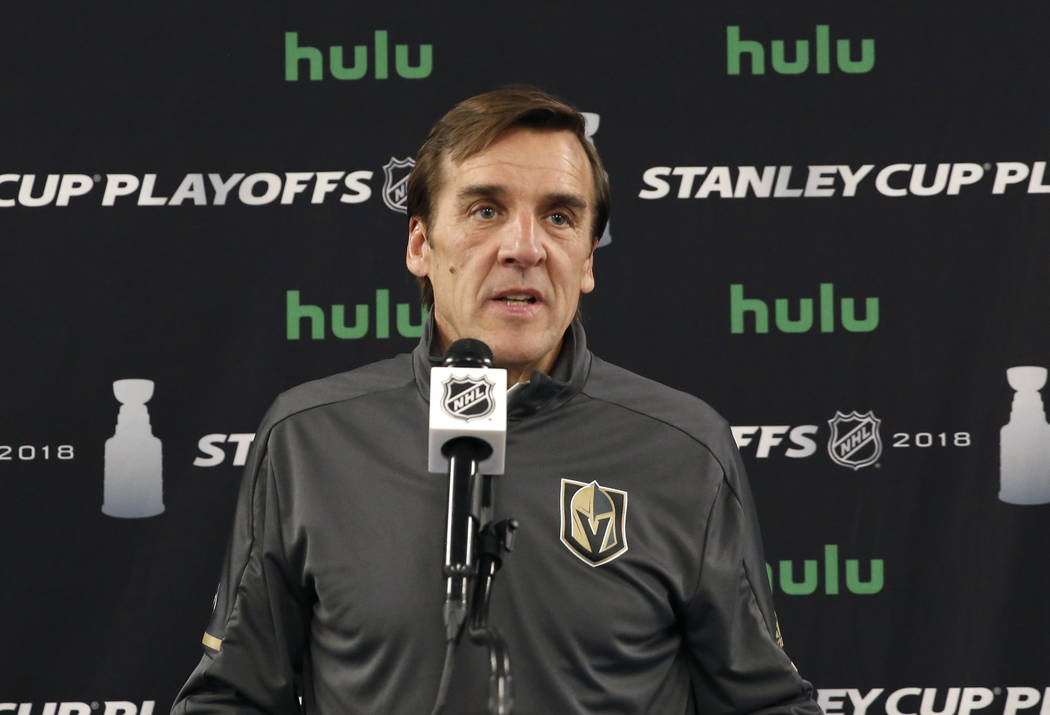 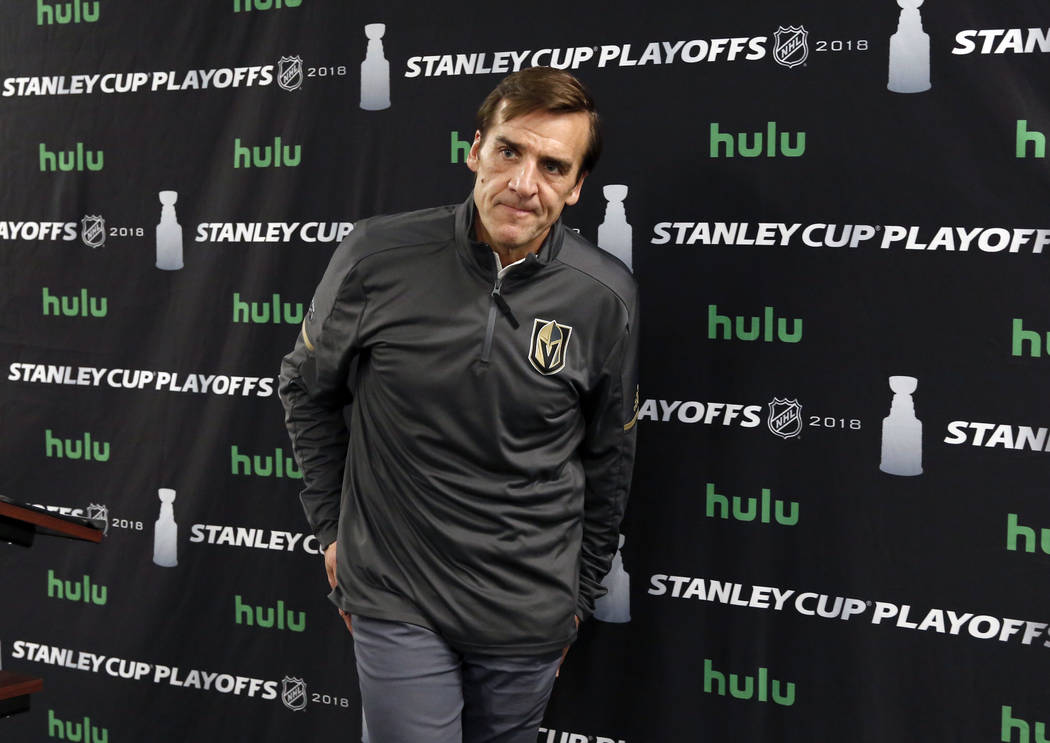 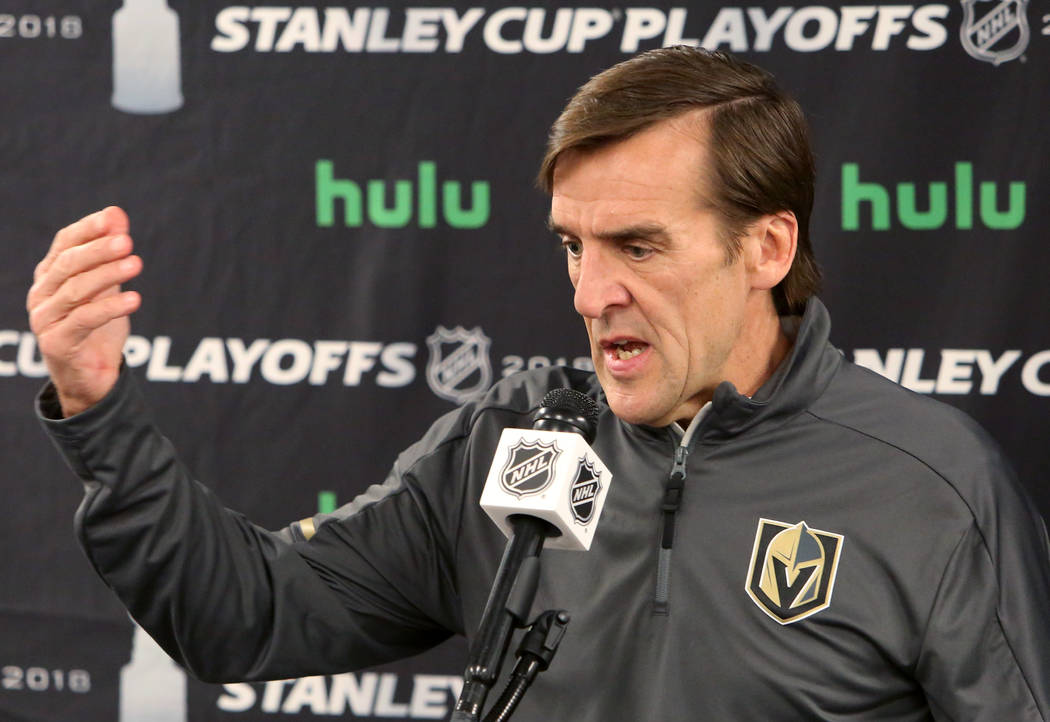 George McPhee’s first season as a general manager in the NHL culminated with the Washington Capitals reaching the Stanley Cup Final in 1998 for the only time in franchise history.

In the ensuing 16 years with McPhee in charge, the Capitals never advanced past the second round of the Eastern Conference playoffs.

But now that his postseason albatross has been lifted with the Golden Knights in the Western Conference final, McPhee is not satisfied.

“I’ve been doing this long enough to know, honestly, there are different ways to look at this,” McPhee said Monday at City National Arena. “For me, it doesn’t mean anything. Yet. We’d all like to win some day, and if not now, when? None of us want this to end, so I am really happy that we have another game to play and a new series that begins.”

The Knights finished off a six-game series win over San Jose with a 3-0 road victory on Sunday, becoming the third team in NHL history to win multiple playoff series in their inaugural season.

They will play at Winnipeg or Nashville to begin the Western Conference final at a time and date to be determined. The Predators beat Winnipeg 4-0 on Monday to force a deciding Game 7 on Thursday in Nashville.

“Whoever it’s going to be is going to be one heck of a team,” McPhee said. “They finished with more points than we did, so with each round it gets tougher and tougher. It may not be a bad thing to start on the road this time around. Something a little bit different. And we’re going to spend the next few days trying to get ready for that first period of that next game. But we’re certainly happy to be here and have a chance to do it.”

The Knights did not practice Monday, but the excitement surrounding the team has reached Carson City, as Gov. Brian Sandoval was at City National Arena and briefly met with McPhee.

“We had a good conversation this morning and he was very complimentary of what the team did after October 1 and how the players have been involved and continue to be involved helping out,” McPhee said.

McPhee praised Knights coach Gerard Gallant for his lineup changes throughout the series against San Jose and noted the team’s depth was pivotal.

Ryan Reaves took the place of injured winger William Carrier on the fourth line during Game 6 and turned in a strong performance with a team-high eight hits in 10:11 of ice time.

Ryan Carpenter shuttled in and out of the lineup during the series and played a key role on the fourth line and killing penalties Sunday.

“Integration hasn’t been easy,” McPhee said. “To come into this team, it’s been hard for Reaves and hard for Tatar and hard for Carpenter. Carpenter didn’t get to play for a month, and the other guys haven’t played as much as they’d like to play. The guys that were here from September have been pretty special in what they’ve gone through and how they’ve developed.

“But the really neat thing is, Gerard can figure out what flavor he wants for a certain game or against a certain team, and he’s pushing all the right buttons. The guys go in and they give us big games.”

McPhee said he had not thought about the similarities between the Knights’ postseason run and Washington’s 20 years ago.

But McPhee did acknowledge there is something unique about his current team.

“I haven’t been around a team like this,” he said. “This feels more like a team than any team I’ve been with at the NHL level.”