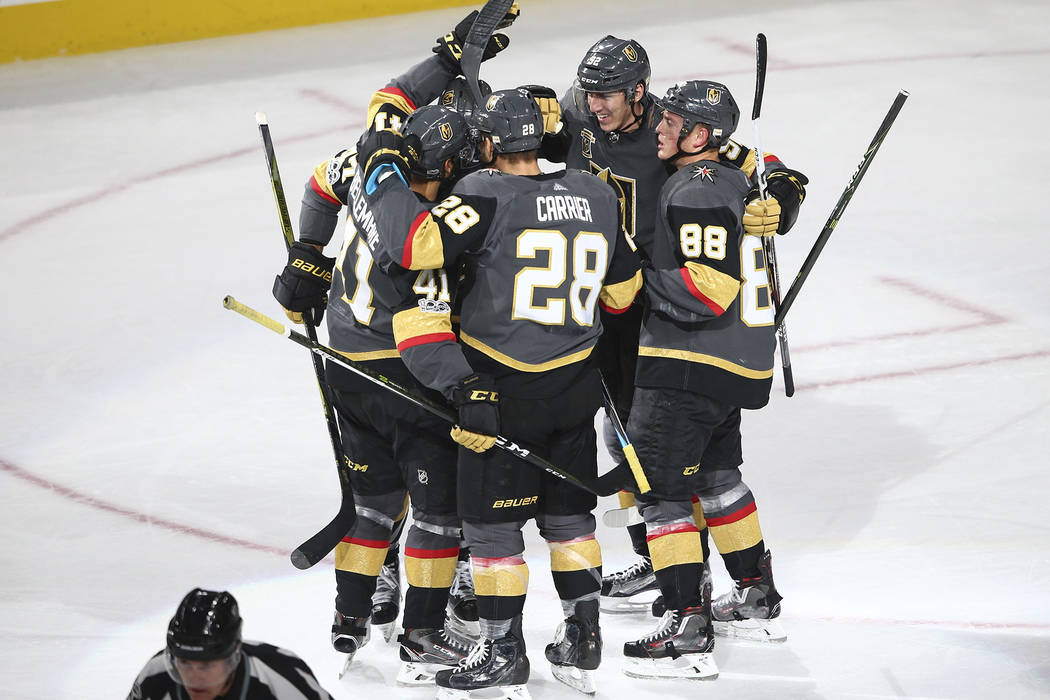 The Golden Knights have been analyzed, picked apart and examined from nearly every angle this week in an effort to figure out their historic start.

But defenseman Nate Schmidt might have the best explanation.

The Knights are the feel-good story from the first month of the NHL season, and the 7-1 start to their inaugural season further endeared them to a city reeling from the Oct. 1 mass shooting on the Strip.

The Knights will look to extend their four-game winning streak when they close their homestand against the Colorado Avalanche (5-4-0) at 3 p.m. Friday at T-Mobile Arena.

“There’s a good buzz around, and it brings more people in your building,” Knights coach Gerard Gallant said. “The media attention we’re getting — not just Vegas alone but all over the hockey world — it’s been fabulous. I think it’s a great start for our franchise. We know we’ve got a lot of work to do, but it’s a great start.”

The Knights own the best winning percentage in the league (.875) and sit one point behind the Los Angeles Kings (7-1-1, 15 points) in the Pacific Division standings.

According to fivethirtyeight.com, only three of the previous nine expansion teams that began play since 1991 — the 1992-93 Tampa Bay Lightning, the 1993-94 Florida Panthers and the 1993-94 Mighty Ducks of Anaheim — won more than one of their first seven games.

Remarkably, the Knights are doing it despite losing goaltenders Marc-Andre Fleury and Malcolm Subban to injury and whiffing on summer free-agent signee Vadim Shipachyov.

“You can tell there’s a big buzz around the city, too,” defenseman Brayden McNabb said. “It’s been fun seeing that, giving them some hockey, and we know they’re enjoying it. I think we’ve turned some heads here, for sure, and now we’ve got another challenge. We’ve got to continue this.”

The fast start has been aided in part by a favorable schedule. The Knights faced winless Arizona twice in the first three games and also saw Boston and Buffalo, both off to slow starts, during the seven-game homestand.

To the Knights’ credit, they topped St. Louis, which is tied with Los Angeles atop the Western Conference standings with 15 points, in overtime Saturday. They outplayed Chicago, a perennial Stanley Cup contender, for the better part of 60 minutes Tuesday with third-string goalie Oscar Dansk between the pipes.

Dansk is expected to start against Colorado.

“I don’t think anyone was expecting a start like this, even though we knew we were pretty good,” forward William Karlsson said. “It’s been working so far. We had some dips, too, but we seem to find a way to win games still. So far, so good.”

Colorado also has been a surprise after posting an NHL-low 48 points last season. The Avalanche are tied for third in the Central Division with 10 points and come in well rested after Tuesday’s 5-3 victory over the Dallas Stars.

“I think the main thing is to be consistent, too, to keep it going,” Knights leading scorer James Neal said. “It can easily go away and you’ll forget about the good start, so we want to stay confident and continue to keep playing well.”