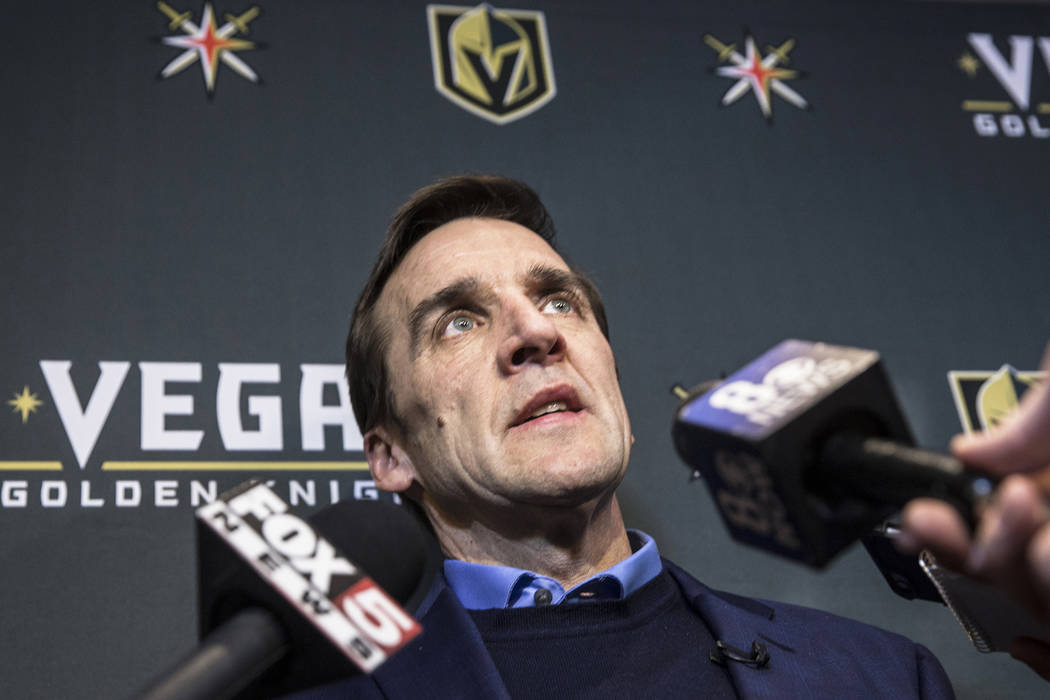 These days, George McPhee’s most trusted traveling companion is his cell phone charger.

The Golden Knights general manager knows he needs to have enough juice to handle the steady stream of calls he’s receiving from the other 30 NHL teams as the June 21 expansion draft looms larger with each passing day. In addition, the NHL Entry Draft, scheduled for June 23-24, also is coming up on the calendar.

“Things are moving very quickly,” McPhee said Thursday from Windsor, Ontario, where he and members of the Knights’ scouting staff are watching the Memorial Cup tournament. “But our recent meetings went well and we feel like we’re very prepared. We’ll continue to do our homework right up until the drafts.”

McPhee said no deals have been consummated yet. But he anticipates things will pick up in the coming days. The Knights will select one player from each of the 30 existing NHL teams and the list will be revealed June 21 at T-Mobile Arena during the NHL Awards Show. Which is why he makes sure his cell phone is fully charged.

“We’ve had some very good conversations but nothing has been done yet,” he said. “Mostly, it has been teams calling us and like I’ve said many times, we’re not going to do a deal just for the sake of doing it. I it will help our hockey club, then we’ll look long and hard at it.”

From Windsor, McPhee is headed to Buffalo for the NHL Draft Combine. Over the course of the week, beginning Saturday, he, assistant GM Kelly McCrimmon, director of amateur scouting Scott Luce, assistant director of player personnel Bob Lowes and director of hockey operations Misha Donskov will interview more than 75 players while watch all 105 participants go through a series of off-ice drills such as standing long jumps, pull-ups, aerobic fitness on a spin bike and bench presses.

The Knights have the No. 6 overall pick on June 23 and the No. 3 selection in each of rounds two through seven on June 24.

“We’ve seen what these kids can do on the ice,” McPhee said. “By going to the combine, we get to see what he does off the ice and how it matches up with what you know of him on the ice.

“It’s another snapshot in trying to complete a full picture on a player. What you have to do is trust your instincts when watching the players go through these drills. A kid could ride the Tour de France on the bike but if he has no hockey sense you have to think long and hard about him and whether you want to take him.”

The interviews may be more important. Las Vegas is a 24-hour town and determining the maturity of an 18-year-old could be a big part of the team’s decision whether or not to select that player.

McPhee said the Knights don’t ask those they interview to take a Wunderlich test. But they do have a psychological exam that some players might be asked to take. McPhee said the average interview, which will take place in a suite the NHL has provided for the team at the KeyBank Center, lasts about 20 minutes.

“We’ll be looking at how they act, their body language, how they dress, how they speak,” McPhee said. “Believe it or not, in 20 minutes you can get to know a kid pretty well. In some cases, we’ve already interviewed the player so we may have different questions for him than someone we’ve yet to talk to.”

McPhee said the Golden Knights players are going to be expected to be active in the community to sell the sport.

“Yes, they get coached up for the interview but it’s still an enjoyable experience talking to them and getting to know them as people.”