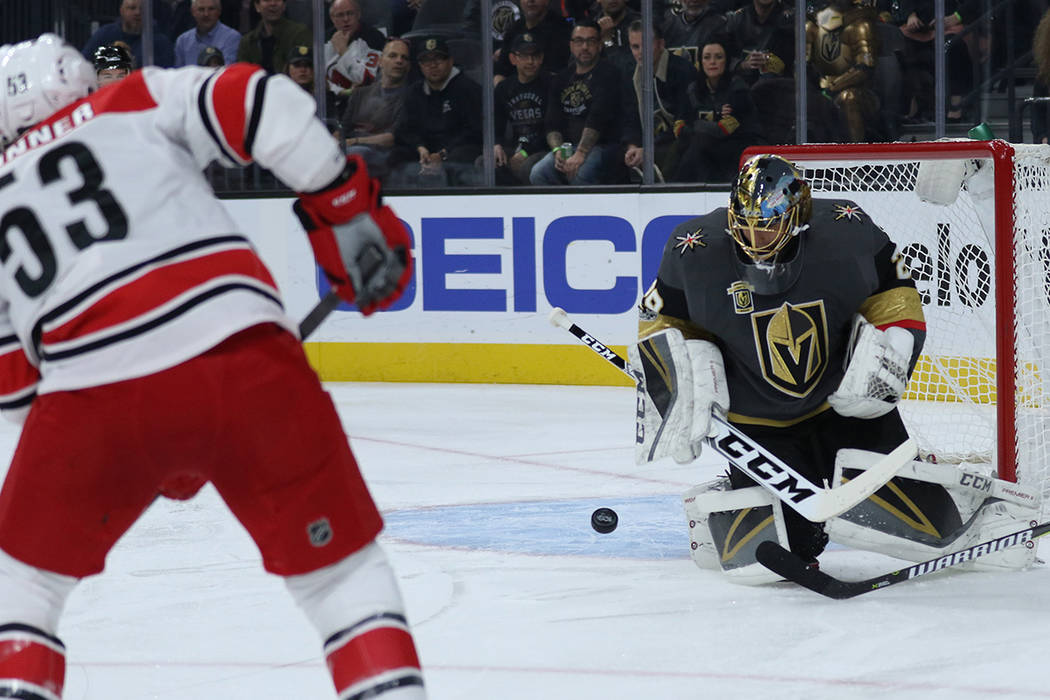 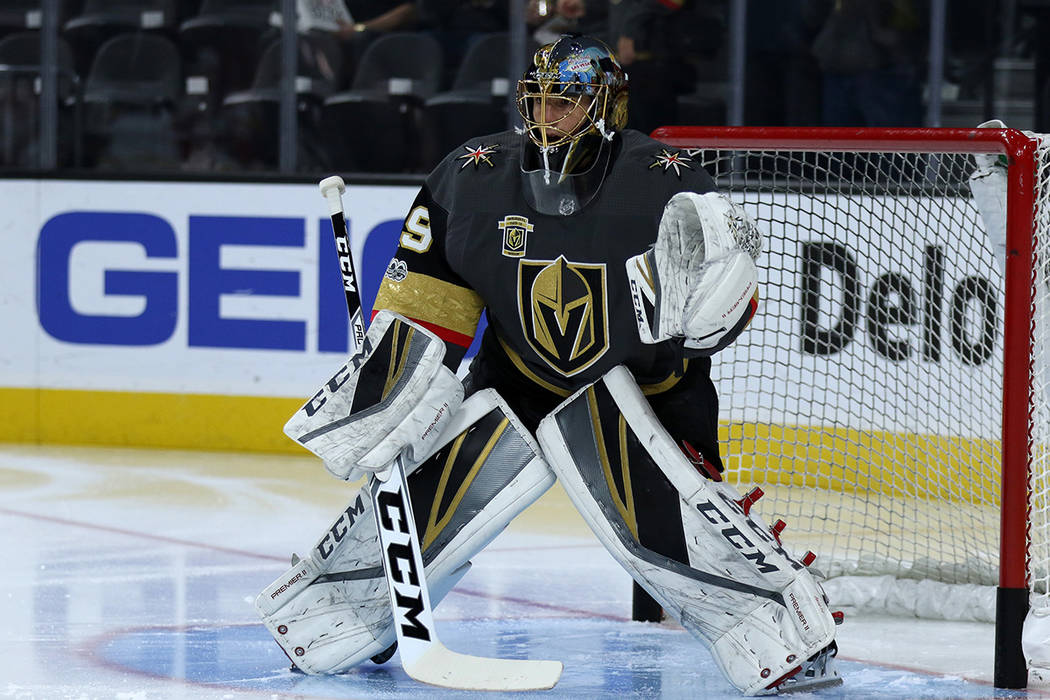 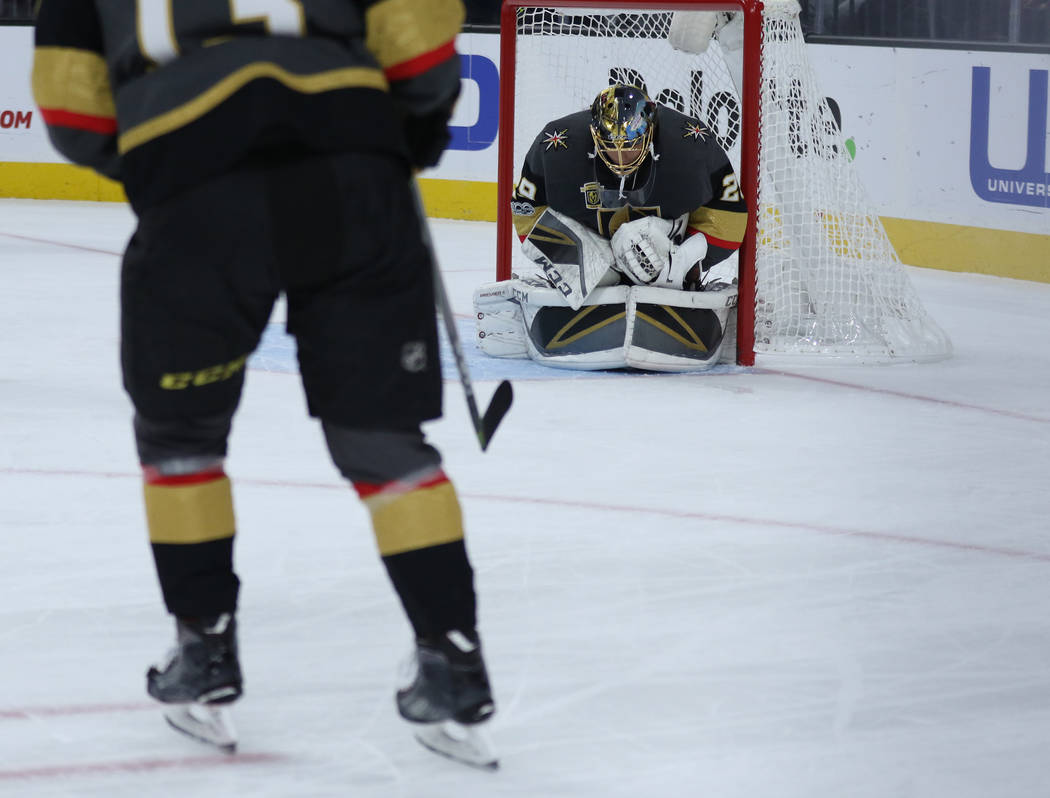 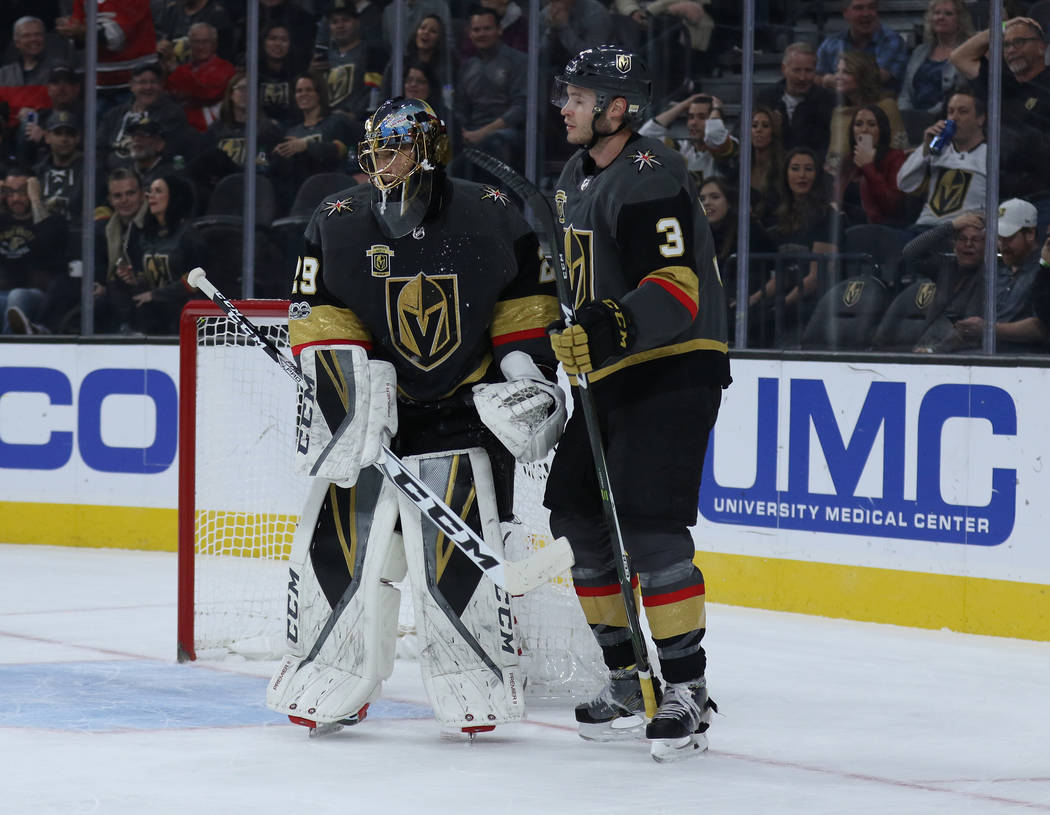 Vegas Golden Knights goalie Marc-Andre Fleury (29) and defenseman Brayden McNabb (3) talk on the ice after a goal is scored by the Carolina Hurricanes during the first period of a NHL game in Las Vegas, Tuesday, Dec. 12, 2017. Heidi Fang Las Vegas Review-Journal @HeidiFang 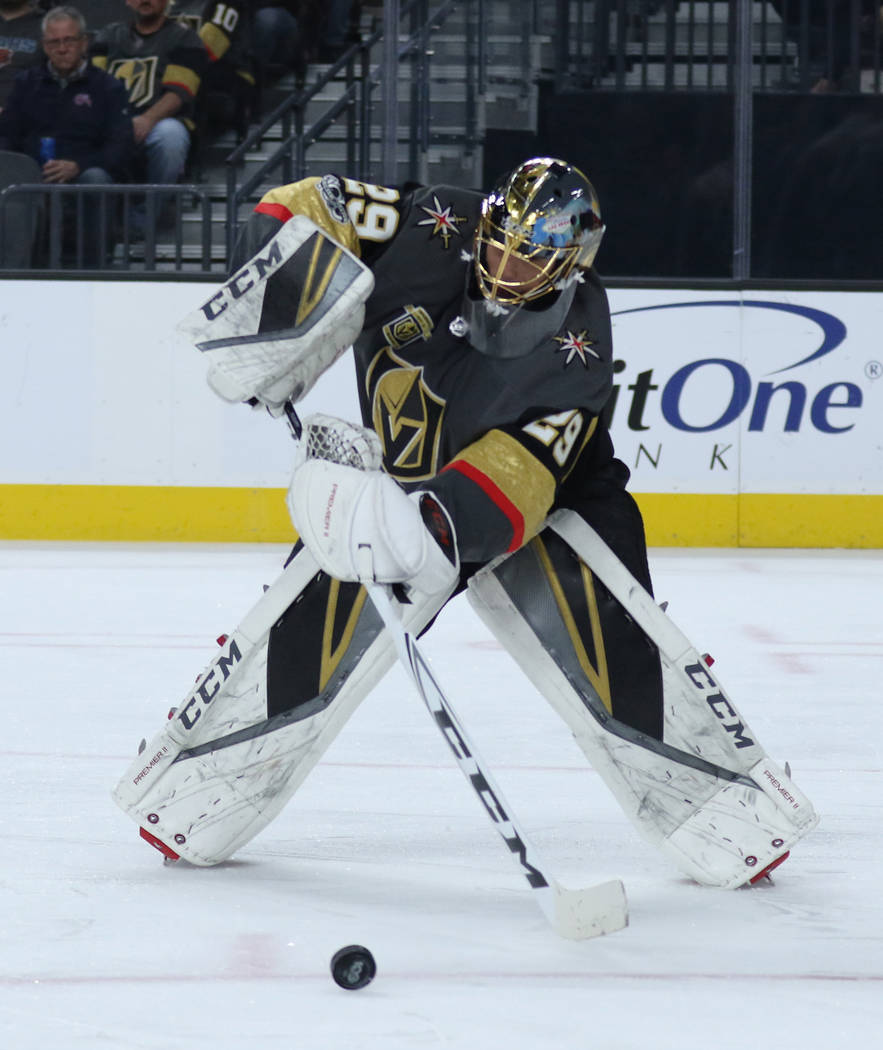 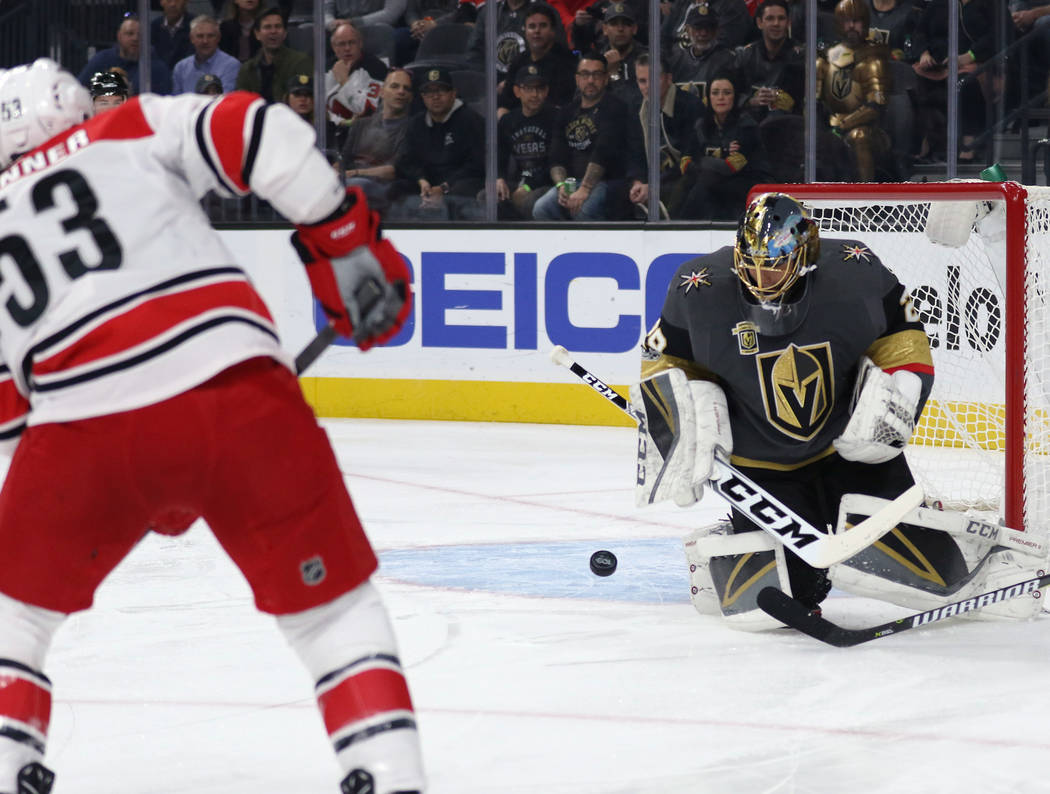 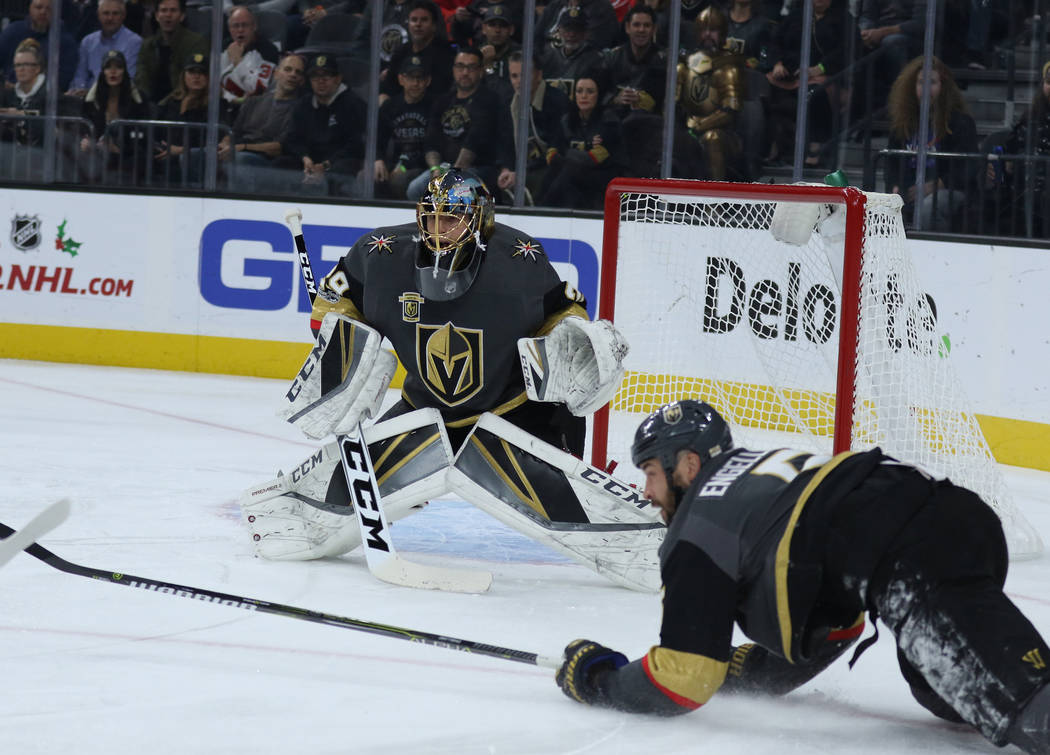 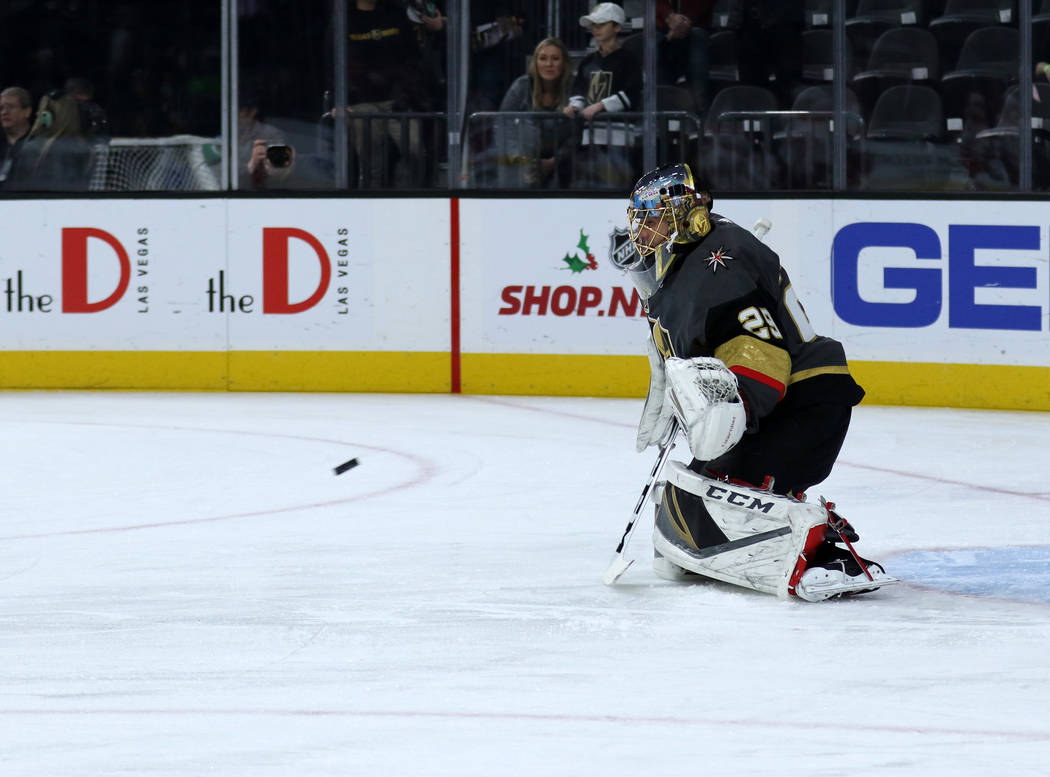 When the NHL schedule was released late in June, every Golden Knights player circled the date when he would play his former team. 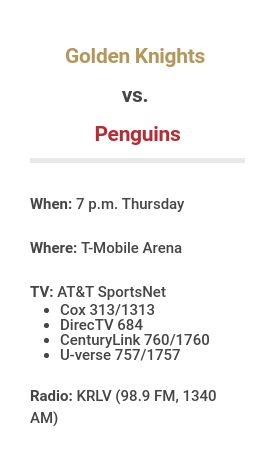 The Knights’ starting goaltender will keep his date Thursday when his current team faces his former team, the Pittsburgh Penguins, at T-Mobile Arena. For a while, it was uncertain whether Fleury would make it; he missed 25 games after suffering a concussion Oct. 13.

He returned to action Tuesday and played well in the Knights’ 3-2 shootout loss to Carolina. Now he will face Sidney Crosby, Evgeni Malkin, Phil Kessel, Kris Letang, Matt Murray and the rest of the Penguins.

“It’ll feel a little weird, a little surreal,” he said of facing his former team. “I was fortunate to play in one place for so long. I had a great time.

“But I was lucky I had a chance to come to a great team and a great organization. The team’s doing well. We’re winning some games, so I’m happy.”

Fleury spent 13 seasons with the Penguins and has three Stanley Cup championship rings (2009, 2016, 2017). Those are obviously the highlights of his time in Pittsburgh. But Fleury said it’s also about the friendships that evolved over the years.

“It’s the people you see at the rink every day,” he said. “It’s your teammates. It’s the fans. You make a lot of lasting friendships over time. Those are some of my best memories of Pittsburgh.”

He will get the chance to reconnect with those fans Feb. 6 when the Knights play at Pittsburgh. Right now, the focus is on Thursday. His former teammates are glad to see him back and said so over the weekend.

As for Fleury’s current teammates, they know they need to play better in front of him to defeat the Penguins, who are in a battle for the top spot in the ultra-competitive Metropolitan Division. Pittsburgh is tied for fifth with the New York Rangers with 35 points. The Pens are only four points behind first-place Columbus.

The Knights (19-9-2) are engaged in their own division battle. They are second in the Pacific Division with 40 points, trailing Los Angeles by three points with two games in hand.

“I didn’t think any speeches are needed for this game,” Knights coach Gerard Gallant said. “It’s the defending Stanley Cup champs. It’s Crosby. It’s Malkin. Kessel is having a great season. We know who we’re facing.”

But Fleury is the center of attention and eagerly awaits the reunion.