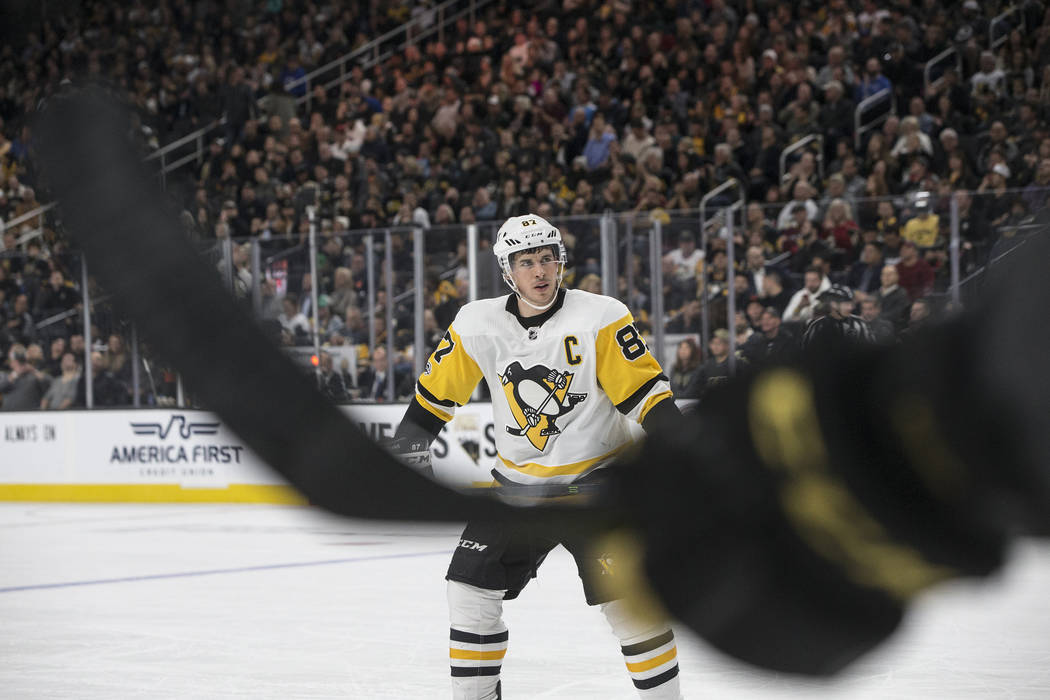 Penguins center Sidney Crosby (87) gets ready for a face off in the second period of Pittsburgh's road matchup with Vegas on Thursday, Dec. 14, 2017, at T-Mobile Arena. The Golden Knights defeated the Penguins 2-1. Benjamin Hager Las Vegas Review-Journal @benjaminhphoto

The Golden Knights have been up and down killing penalties all season and the fact they rank 23rd in the NHL in that category is proof.

But on a night where the Knights needed to be on top of their game on the kill, they were. They were a perfect 3 for 3 in the 2-1 win over the Pittsburgh Penguins Thursday, keeping Sidney Crosby, Evgeni Malkin, Phil Kessel and Kris Letang off the scoresheet.

“They had a couple of good looks but for the most part, our penalty kill was outstanding,” Knights coach Gerard Gallant said. “When you can hold that power play 0-for-3 and not a whole lot of scoring chances, they did an excellent job.”

The Knights were credited with 22 blocked shots for the game. The team’s season high for blocks is 25 against Dallas on Dec. 9.

The good teams win the close ones. And the Golden Knights have been in a lot of close ones.

Of the 31 games played so far, the NHL expansion team has been involved in 14 one-goal games and are 10-4. That includes overtime, where the Knights are 5-0, and shootouts, where they are 2-2.

The Knights are usually outhit by their opponent. Thursday, it was a different story as they had a significant 28-11 edge in hits over the Penguins.

The only time the Knights failed to outhit the opponent was Tuesday when Carolina had a 14-11 edge in hits and the Hurricanes won 2-1 in the shootout.

Knights will not have a representative on Canada’s World Junior Championships roster, as Nick Suzuki was cut Friday, a day after Cody Glass was cut.

Suzuki, a center who was drafted No. 13 overall by the Knights in June’s NHL Entry Draft, has been playing in juniors for Owen Sound of the Ontario Hockey League.

Defenseman Erik Brannstrom, whom the Knights selected at No. 15 in the draft, is expected to make Sweden’s final roster for the tournament, which begins Dec. 26 in Buffalo, New York.