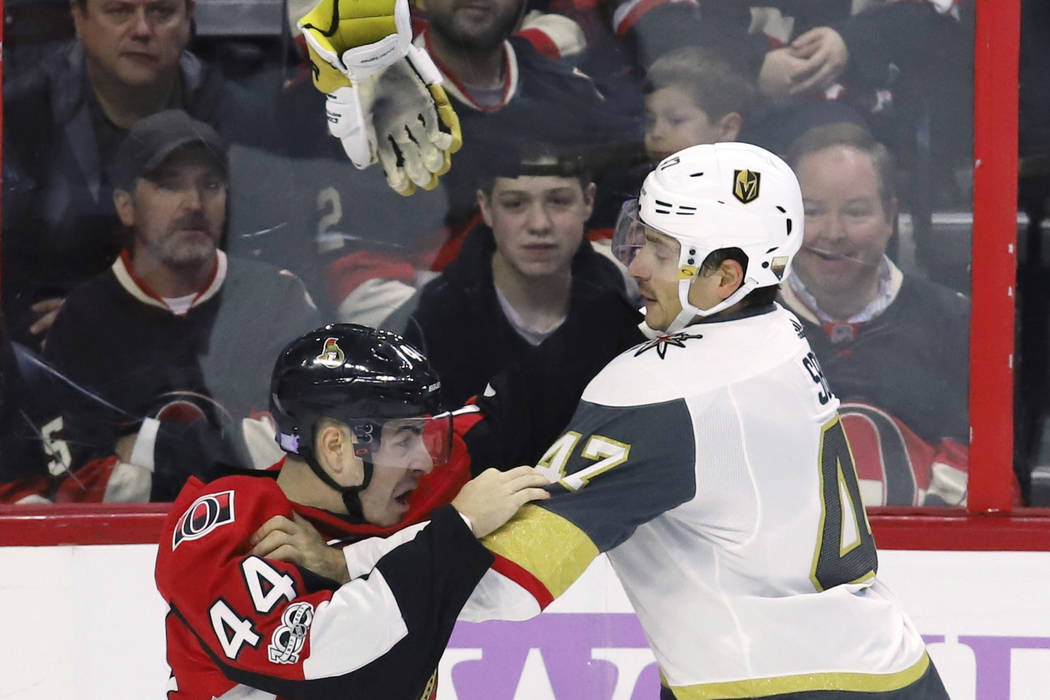 VANCOUVER, British Columbia — The Golden Knights hoped injured defenseman Luca Sbisa would be ready to return after he missed the two-game road trip to western Canada.

Now, it appears that will not be the case.

The Knights announced prior to Thursday’s game against the Vancouver Canucks they officially placed Sbisa on the injured-reserve list due to a lower-body injury.

The move is retroactive to Saturday, according to a Knights team spokesperson, which means Sbisa officially is eligible to return for Sunday’s game against the Los Angeles Kings at T-Mobile Arena.

But that seems extremely unlikely.

The Knights waited several days before making the move, and it wasn’t necessary for the team to place Sbisa on IR if he was expected to be in the lineup Sunday.

Knights coach Gerard Gallant declined to comment on Sbisa’s timeline for a return, and general manager George McPhee was not available for comment.

A spokesperson said the team is not expected to immediately recall anyone from the minors to replace Sbisa on the roster.

Sbisa was injured in the Knights’ 5-2 victory over Winnipeg on Nov. 10, the same game that saw him record a goal and an assist.

Gallant said Monday before the team left Las Vegas that Sbisa was day-to-day.

Sbisa has one goal and seven assists this season while playing with Nate Schmidt on the Knights’ top defense pairing.

Defenseman Shea Theodore grew up about an hour from Vancouver in Aldergrove, British Columbia, rooting for the Canucks. He had several family members — including his parents — who were expected at Rogers Arena on Thursday.

“It will be good to see them and have them watch me play,” Theodore said after the team’s morning skate.

Theodore had an assist Nov. 6 at Toronto for his only point in three games, and was scratched the previous three games. He replaced Jon Merrill in the lineup for the Knights.

“He’s a good player for us, but he’s got to play better,” Gallant said. “He’s a talented guy with a lot of skill and a lot of speed and moving the puck. That’s what we want from him. We want him in our lineup every night.”

Thursday’s game against the Canucks was the second of six in a row for the Knights against Pacific Division foes.

The Knights, who entered Thursday in second place in the tightly-packed division, face Los Angeles, Anaheim, San Jose and Arizona in a seven-day span next week.

“We haven’t played a whole lot of divisional games yet, so they’re big games for sure,” Gallant said.