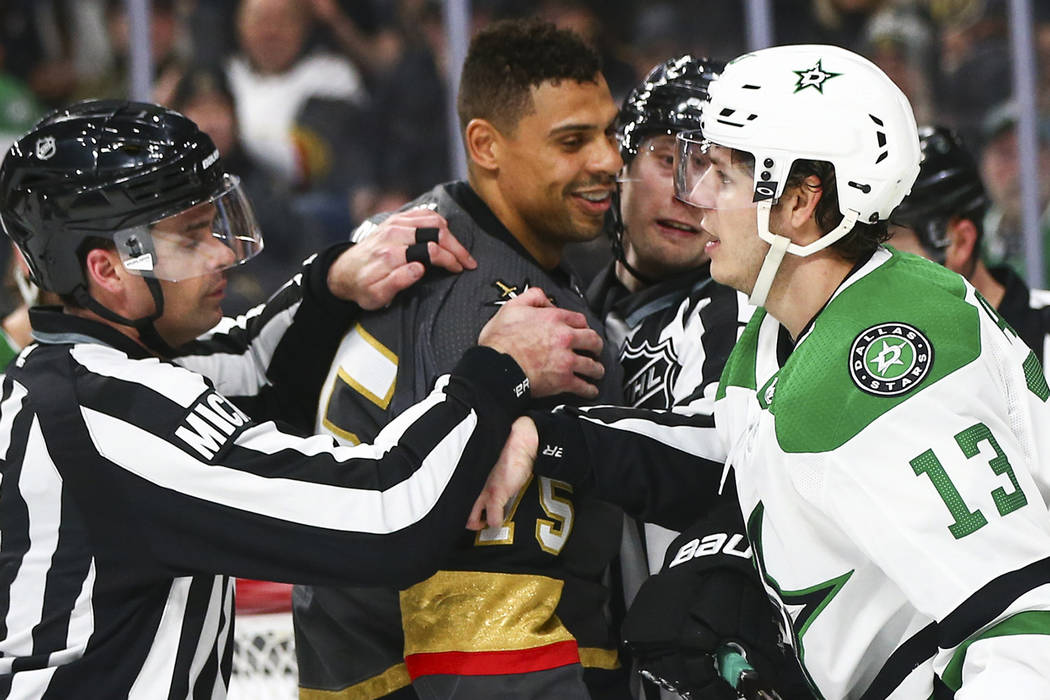 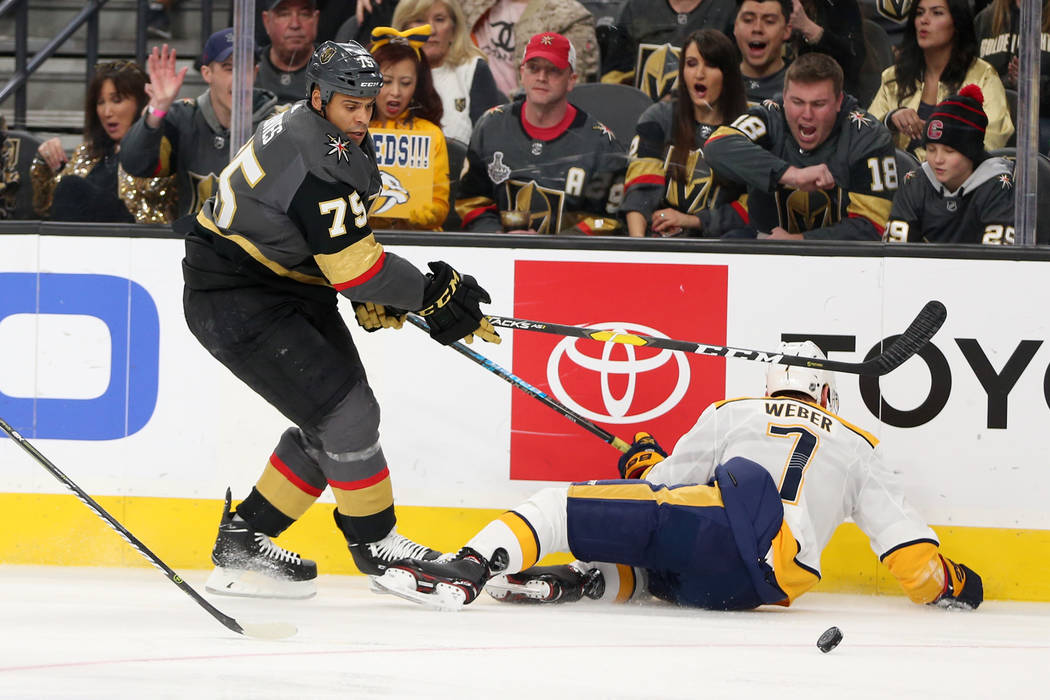 Ryan Reaves has some work to do on his chirps.

The Golden Knights right wing was voted the third-best trash-talker in this year’s NHL Players’ Association poll that was released Wednesday.

“I think I’m going to be running my mouth a little bit more now, that’s for sure,” Reaves said. “Especially when we play Boston, I guess.”

Reaves was voted the league’s toughest player with nearly half the votes last year, but that category was not included in the latest survey of more than 500 players.

“Here’s the thing. Anybody can be a Twitter tough guy, right?” Reaves said. “Anybody can sit behind a keyboard and be tough and chirp and sit there for an hour and think about something to say. But it’s the off-the-top-of-the-head stuff, that’s the hard stuff.”

Reaves also called out Doughty for his trash-talking skills.

“He was No. 2, which fascinates me,” Reaves said. “I don’t remember any good ones from him, but maybe that’s just because I was making my own.”

Reaves’ preferred method of trash-talking is to laugh in an opposing player’s face. That might explain why he didn’t garner more than 5.5 percent of the votes.

“The laugh usually sparks something,” he said. “Usually people tell me I’m a bad hockey player and I say, ‘OK, well, that’s true. So what?’ And then they get all flustered and I come back with one.”

Reaves also finished third in the vote of which player would make the best TV analyst when he retires. 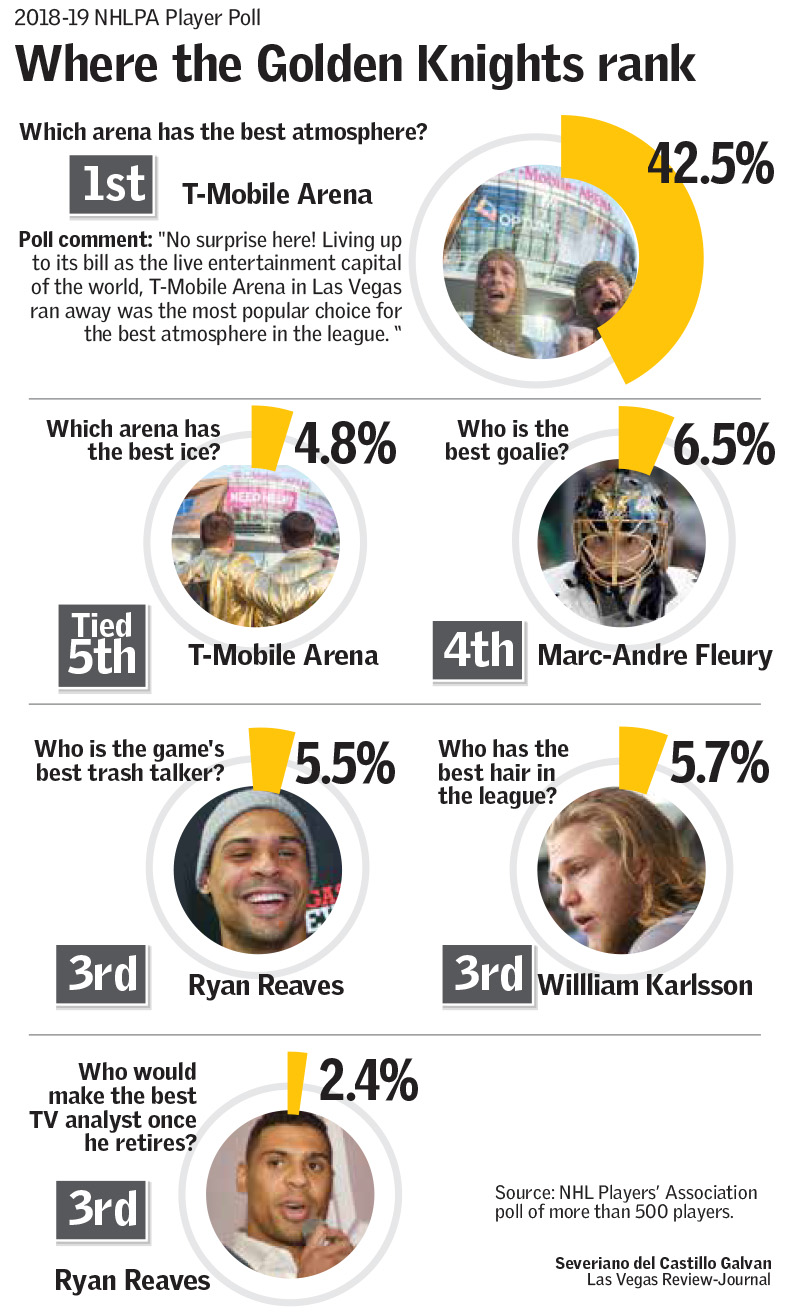 “If this beer thing goes belly up, then yeah, maybe I’ll consider it,” Reaves said. “People have told me that before. I don’t know if I know enough stats to do that.”

T-Mobile Arena was the winner of the best arena atmosphere with 42.5 percent of the votes in a landslide over Bell Centre in Montreal. The Knights’ home also had the fifth-best ice in the league.

“It’s just not even close,” said Max Pacioretty, who played 10 seasons with the Canadiens. “I had people out from Montreal the last game, and they were just blown away. You can’t really talk about it. It doesn’t really do it justice.”

Goaltender Marc-Andre Fleury did not participate in the Knights’ practice at T-Mobile Arena on Wednesday and remains day-to-day with a lower-body injury.

Coach Gerard Gallant said Fleury is not expected to be available for Thursday’s game against the Winnipeg Jets.

Center Pierre-Edouard Bellemare did not skate Wednesday, and Gallant said he is day-to-day with an undisclosed injury.