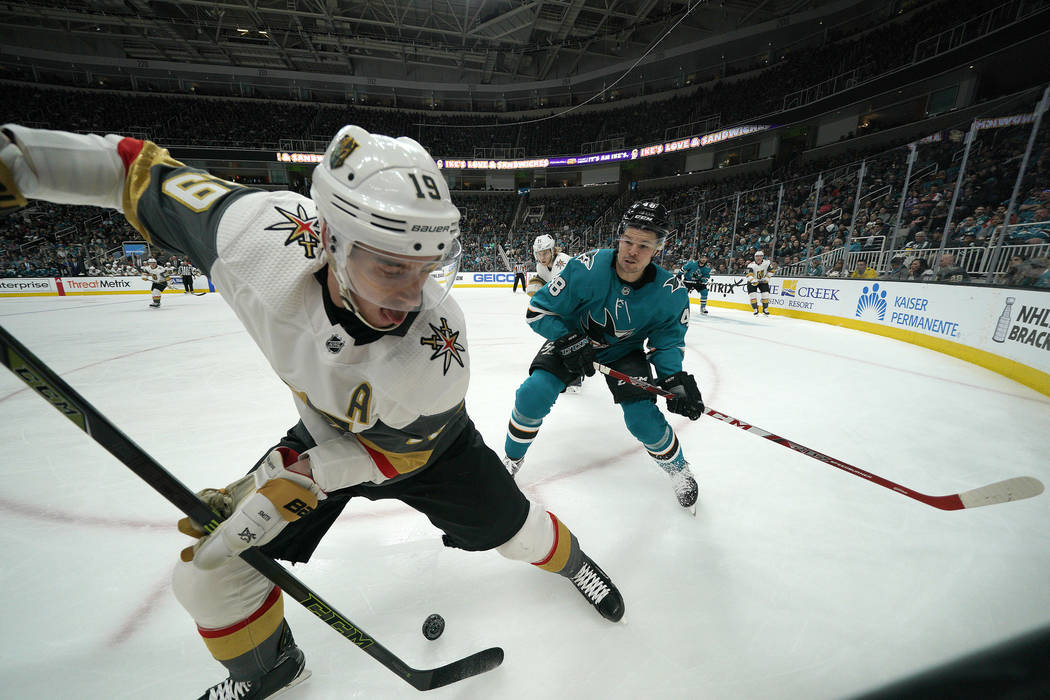 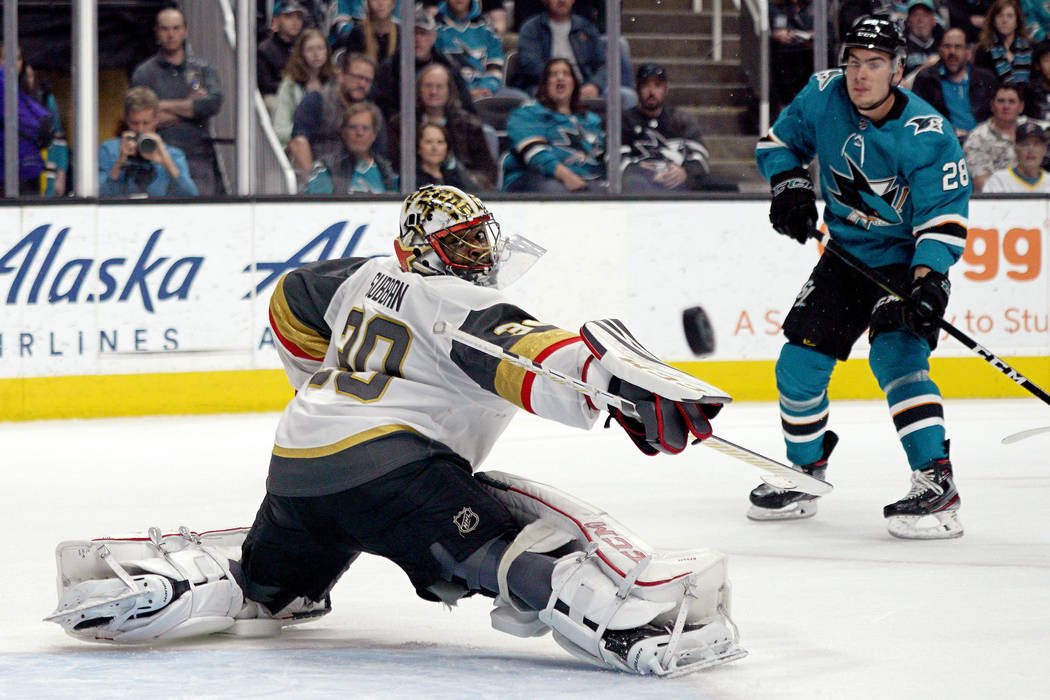 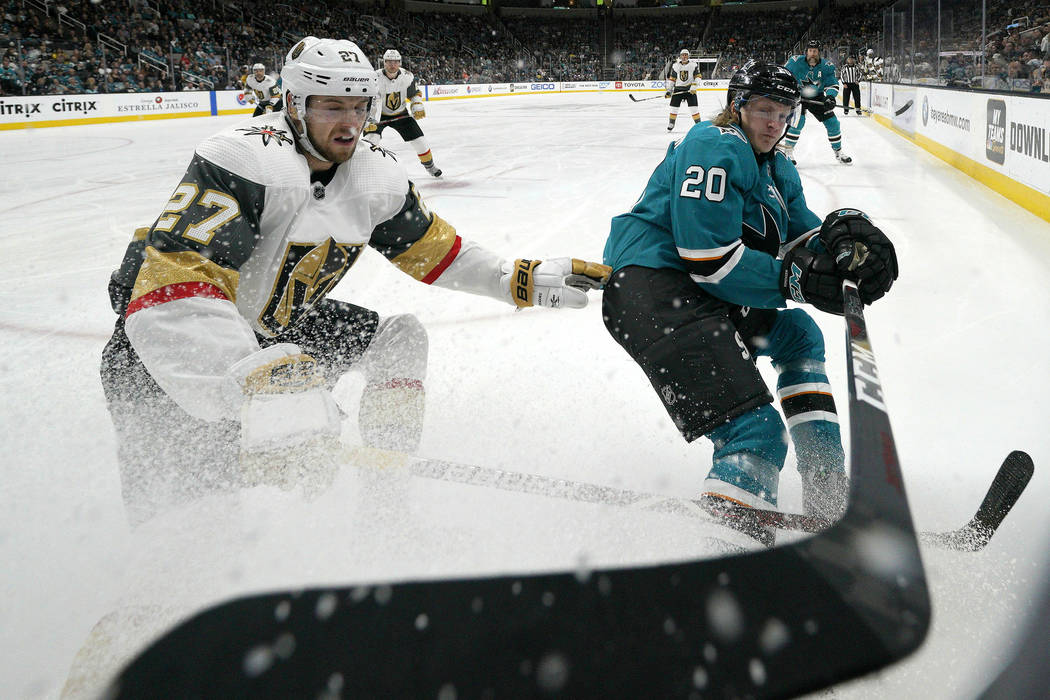 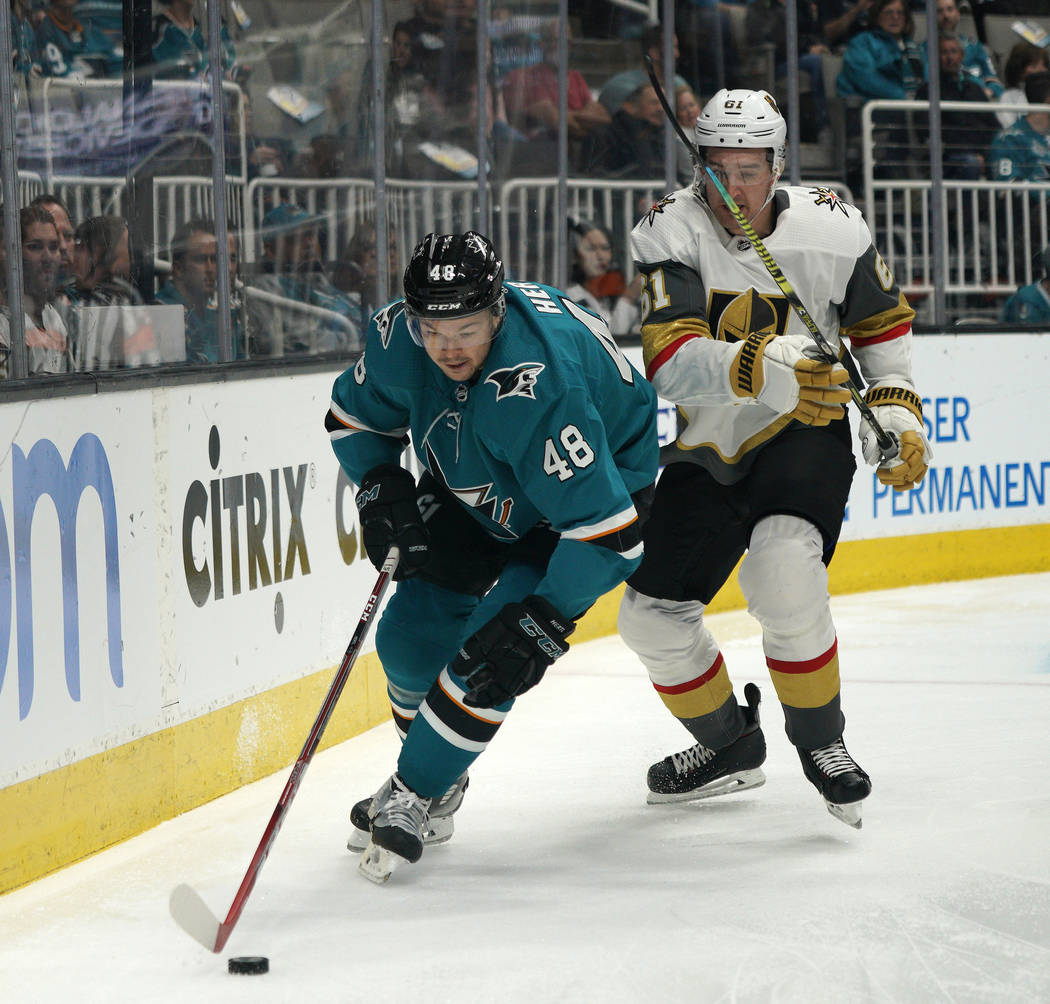 SAN JOSE, Calif. — The Sharks knew they would be opening up the NHL playoffs at home after beating the Golden Knights on Saturday night.

San Jose learned its opponent for that series on Sunday as Calgary scored three times in a 1:15 stretch of the first period on its way to a 5-3 win at SAP Center to clinch the Pacific Division and lock the Sharks into a first-round matchup with the Golden Knights.

“Our goal was to give ourselves an opportunity to try to catch Calgary and we can’t do that now,” Sharks forward Logan Couture said. “We have three (regular-season) games left and then we can look forward to playing (the Knights). They’re a very good team, so it’s going to be a challenge.”

Vegas eliminated San Jose in six games in the second round on their way to the Stanley Cup Final last season. But the Sharks snapped a seven-game losing streak with a 4-3 overtime win over the Knights on Saturday in a physical affair in which both teams appeared to be trying to send a message ahead of their playoff series.

“We definitely feel the rivalry,” San Jose forward Timo Meier said. “It’s going to be a hard one that will take a lot out of us. We know we have to bring our ‘A’ game.”

While the matchup is set, the dates are not. The playoffs will begin on April 10 and most of the eight series will open up on either April 10 or 11.

That should give both teams time to get their games in order.

The Knights have dropped five straight games, but the Sharks have now lost eight of their last nine with the only win coming over Vegas.

“For us, we have to worry about ourselves and the way we’re playing,” Sharks defenseman Brenden Dillon said. “It doesn’t matter if we’re playing the Tampa Bay Lightning or the Buffalo Sabres. We have to make sure we’re on our game. When we are, we can play with anybody.”

Sharks coach Pete DeBoer said it makes preparation for a playoff series easier when an opponent is known this far in advance. His focus now is to try to get his team healthy.

San Jose is down a couple key defensemen and have other players dealing with nagging injuries that will now have nearly two weeks to heal before the team’s next meaningful game.

The Flames will play the second wild card from the Western Conference, currently the Colorado Avalanche.

The NHL’s Department of Player Safety announced the fine Sunday for an incident that occurred at 16:10 of the third period of San Jose’s 4-3 overtime win at SAP Center.

Thornton was also fined $2,500 for high-sticking Reaves at 15:20 of the first period when he appeared to intentionally poke the butt-end of his stick in the area of Reaves’ neck, triggering a skirmish that involved all 10 skaters on the ice.

Reaves laughed off Thornton’s actions after the game.

The money collected from the fines will go to the Players’ Emergency Assistance Fund.

Saturday’s game featured 42 penalty minutes between the Pacific Division rivals in their final regular-season meeting before their first-round playoff matchup.

The Knights were able to take some positives out of Saturday night’s loss, which left them winless (0-3-2) in their last five games.

Coach Gerard Gallant singled out a strong start in which they scored first for the first time in five games. Cody Eakin thought the Knights were able to maintain composure despite what they saw as some aggressive antagonism from the Sharks.

There were certainly signs the Knights are close to getting on track, but it wasn’t enough for William Karlsson.

“We want to have a winning feeling going into playoffs, obviously,” he said after Saturday’s game. “Time for us to step it up here. We’re losing too much.”