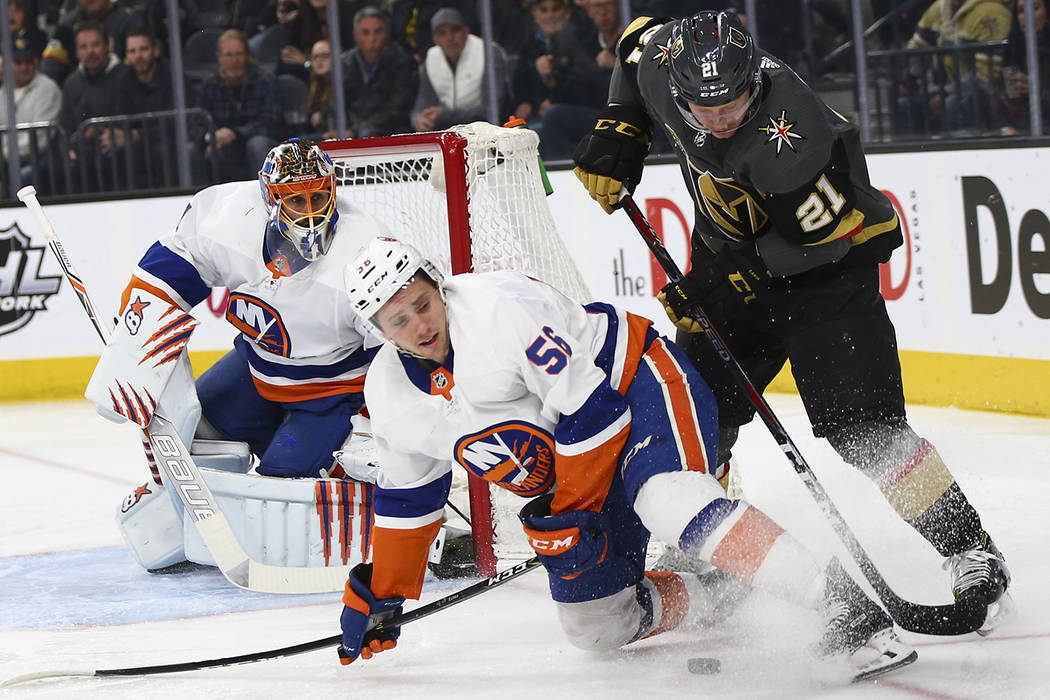 Cody Eakin doesn’t need to hear the statistics to know he and his Vegas Golden Knights linemates are struggling offensively.

“We haven’t been on the board,” he acknowledged Monday.

The Knights continue to lead the Western Conference in goals per game, as coach Gerard Gallant pointed out, and their lack of secondary scoring hasn’t hurt them in the standings, either.

But with the trade deadline less than two weeks away, on Feb. 26, Knights general manager George McPhee could look to add more scoring to his bottom six forwards.

“When you’re playing three, four lines deep and you’re just rolling and everyone’s producing, it makes it a lot easier,” wing Alex Tuch said. “And that was what was happening the first half of the season, and we kind of hit a little bit of a rut in the road, our two lines.”

Nosek, who suffered an upper-body injury during the first period of the Knights’ 1-0 loss at Nashville on Jan. 16, was activated from the injured-reserve list Monday, according to the Knights’ roster on their official website.

Nosek practiced Monday with full contact for the first time since the injury, and Gallant said he was uncertain whether the fourth-line wing would face Chicago.

“I started to wear the regular jersey with the boys, so I’m ready to go,” Nosek said. “Now, it’s a coach’s decision when I will play. If coach puts me in, I always try to do the same thing. Go hard to the net and be good defensively.”

The Knights’ bottom six forwards have been quiet the past 18 games, accounting for seven of the team’s 55 goals since Jan. 2.

“It’s one of those things that’s going to come. We’ve just got to keep working at it, keep skating, keep generating,” Eakin said. “I think if we spend our time in the offensive zone rather than the defensive zone … even if we don’t put the puck in the net, we’re still doing good things. We’re still making it hard on their teams, but we’ve got to chip in here and there.”

Gallant has juggled his bottom six forwards in an effort to find a spark and appeared to find a combination that worked on the last road trip, when he put Tuch with Pierre-Edouard Bellemare and Ryan Carpenter.

That line combined for two goals and four assists in a 4-3 victory over Washington and three points (one goal, two assists) in a 5-4 loss at Pittsburgh.

Tuch skated with Eakin and Lindberg at practice Monday, and the trio are expected to play together against the Blackhawks. Nosek was reunited with Bellemare on the fourth line, with Carpenter and Leipsic working at the other wing.

“I liked that line all season long and they work well together, especially killing penalties together and doing that,” Gallant said. “It’ll be good to get (Nosek) back. He’s a big body guy, he skates well and plays a solid game.”