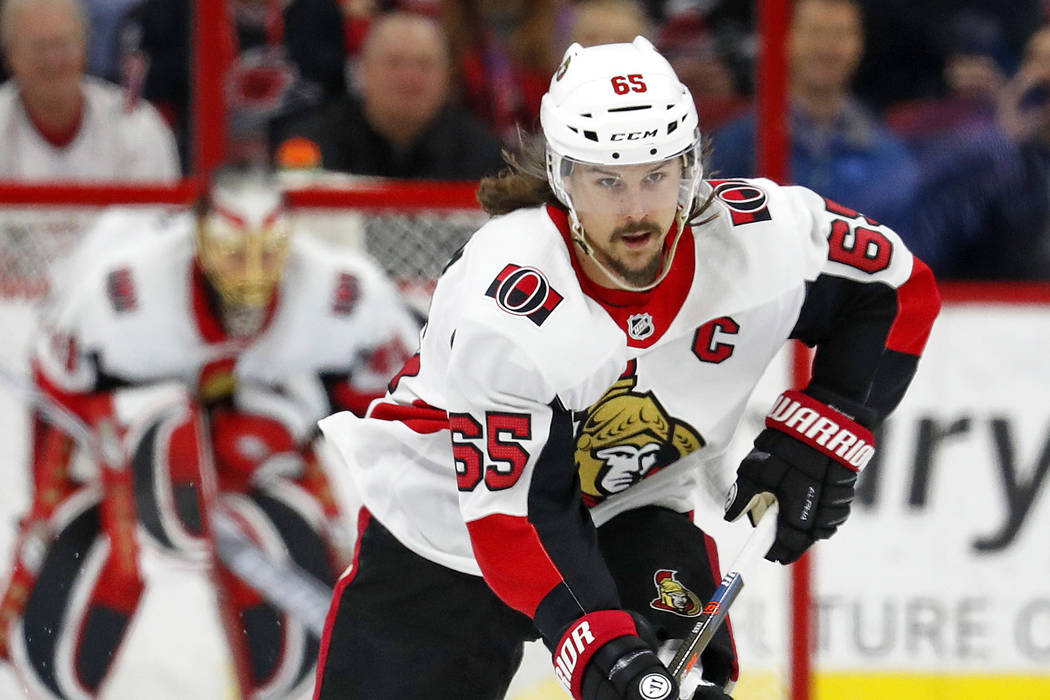 In this Jan. 30, 2018, file photo, Ottawa Senators' Erik Karlsson (65) moves the puck against the Carolina Hurricanes during the first period of an NHL hockey game, in Raleigh, N.C. (AP Photo/Karl B DeBlaker, File)

The Golden Knights experienced a massive case of FOMO (fear of missing out) over Ottawa’s Erik Karlsson this summer.

The all-star defenseman was the subject of multiple trade rumors — remember last month when Karlsson was a lock for Tampa Bay? — with the Knights mentioned as a possible landing spot each time.

But with training camps set to open in two weeks, the NHL’s most entertaining offseason drama continues to play out with no resolution in sight.

Karlsson declined an interview request from Canadian media Tuesday and said he would address his future when camp opens Sept. 13. Senators general manager Pierre Dorion also has been tight-lipped on the subject.

There’s a lot to digest here, but this seems like as good a time as any to take a deeper dive into Karlsson’s on-again, off-again trade saga.

The 28-year-old from Sweden is a two-time winner of the Norris Trophy as the NHL’s top defenseman and leads all blueliners in points (518) since he entered the league in 2009.

Karlsson was sixth among defenseman in scoring last season despite offseason ankle surgery and some difficult circumstances (we’ll get into that in a bit). His 53 assists and 62 points would have ranked first and fourth, respectively, on the Knights.

Karlsson appears to be a perfect fit for a team that thrives on speed and moving the puck quickly in transition.

How did we get here?

Karlsson will be an unrestricted free agent in 2019, and the Senators captain turned down a reported eight-year, $80 million extension offer in July.

In March, Karlsson’s son, Axel, was stillborn, and three months later, his wife filed an order of protection against the longtime girlfriend of former teammate Mike Hoffman, alleging harassment and cyberbullying. Hoffman was traded to Florida in June.

The Senators have an unsettled ownership and arena situation and posted the second-worst record in the league last season after reaching the Eastern Conference Final in 2016-17.

All signs point to Karlsson not re-signing in Ottawa, and Dorion can’t afford to lose his biggest trade asset for nothing, a la John Tavares and the New York Islanders.

Which other teams are involved?

The Stars made a strong push for Karlsson, though their reluctance to part with touted defenseman Miro Heiskanen, the No. 3 overall pick in 2017, reportedly has been a sticking point.

Karlsson was heavily linked with the Lightning since All-Star weekend in Tampa Bay, and that appears to be his preferred destination, where he would team with longtime friend Victor Hedman. San Jose also has reportedly kicked the tires, and Vancouver’s interest leaked last week.

Karlsson, who has a 10-team, no-trade list, reached out to NHL insider Elliotte Friedman to deny rumors he was unwilling to sign an extension with a Canadian team.

Where do the Knights fit in all this?

By all accounts, the Knights were close to a deal for Karlsson at the trade deadline in February and considered one of the front-runners to land him this offseason.

Karlsson has one year remaining on his contract and comes with a $6.5 million salary cap hit. The Knights have plenty of cap room to absorb that and also can offer Karlsson to a lucrative, long-term contract extension.

It could be Ottawa’s insistence on attaching the rest of Bobby Ryan’s sinkhole contract (four years, $7.25 million cap hit) to any deal, or the Knights’ reluctance to part with prospects such as Cody Glass or Erik Brannstrom.

Or, if you like conspiracy theories, restricted free agent Shea Theodore’s contract morass could be delaying proceedings.

When will the drama end?

It’s not in Ottawa’s interest to drag out the proceedings and allow the trade rumors to become a distraction during training camp.

But Dorion doesn’t appear to be in a hurry to trade Karlsson unless his asking price is met, meaning the soap opera could extend into the regular season.