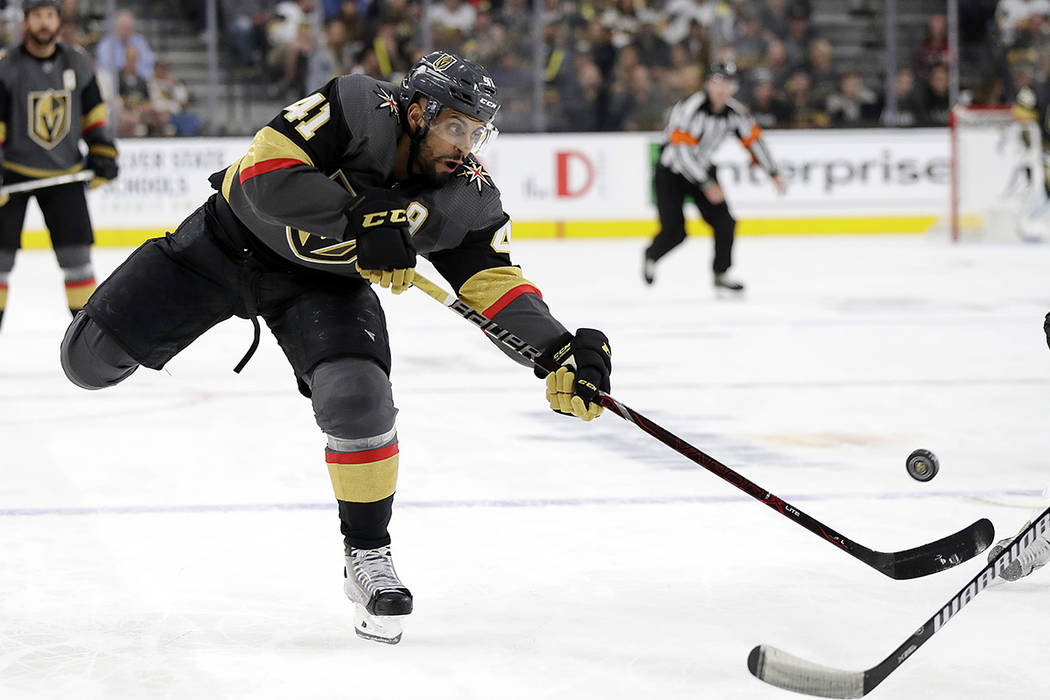 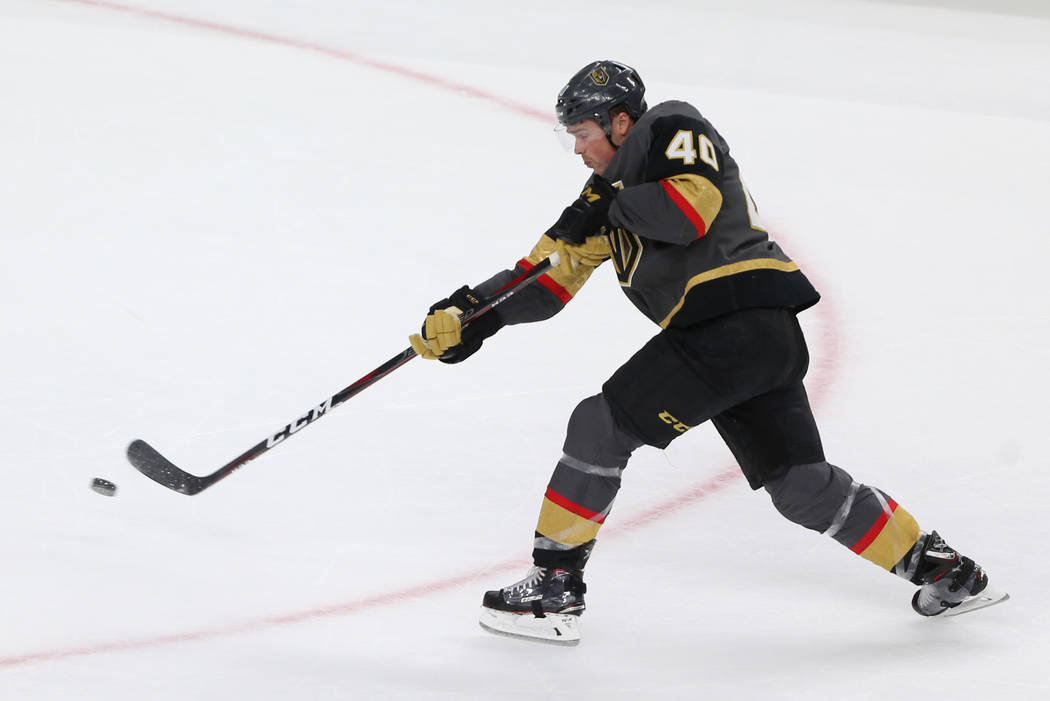 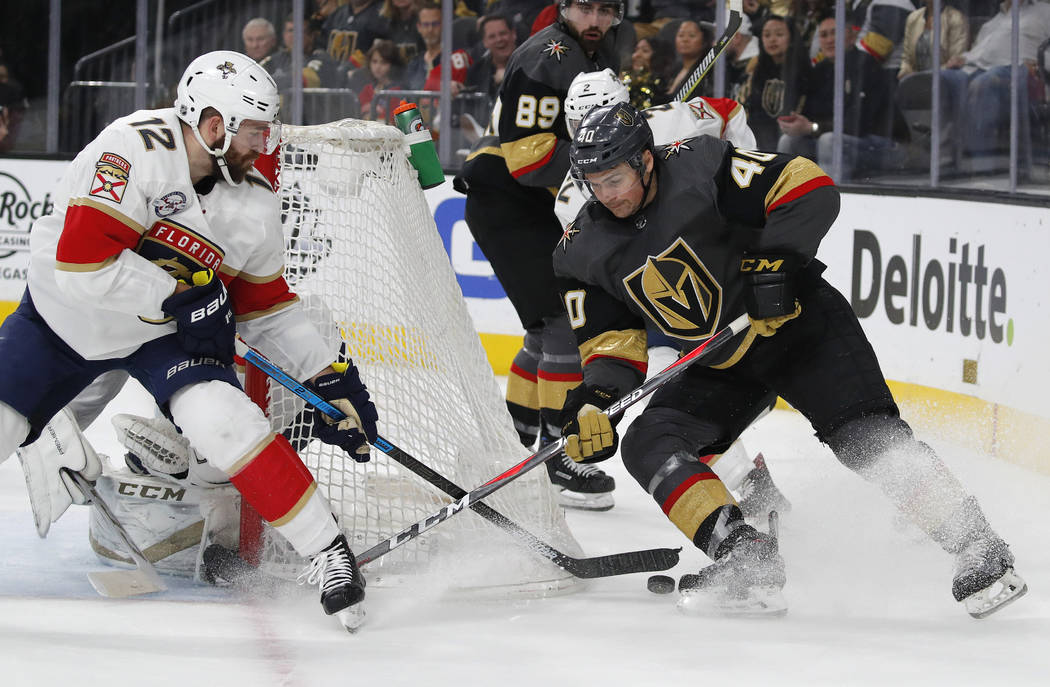 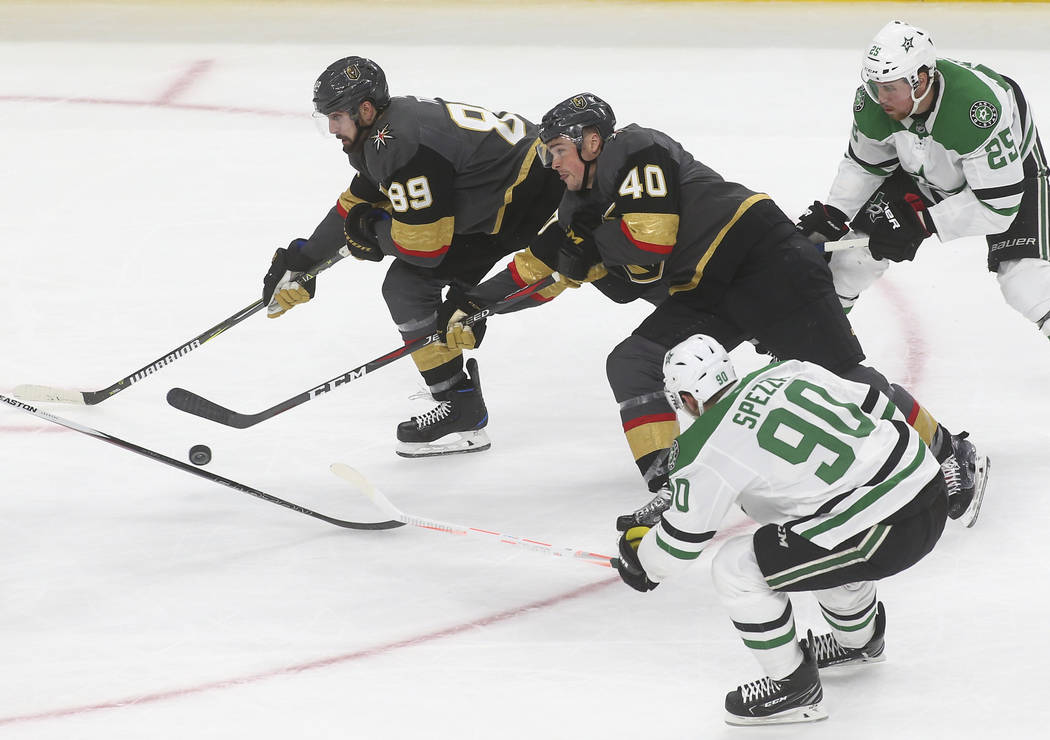 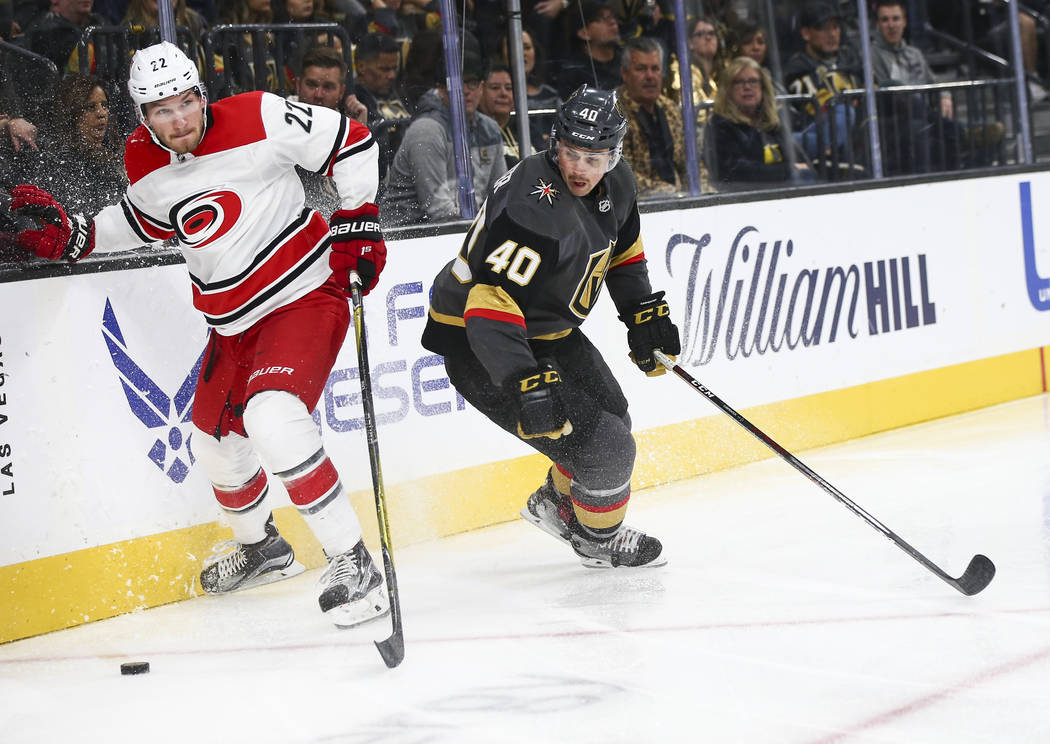 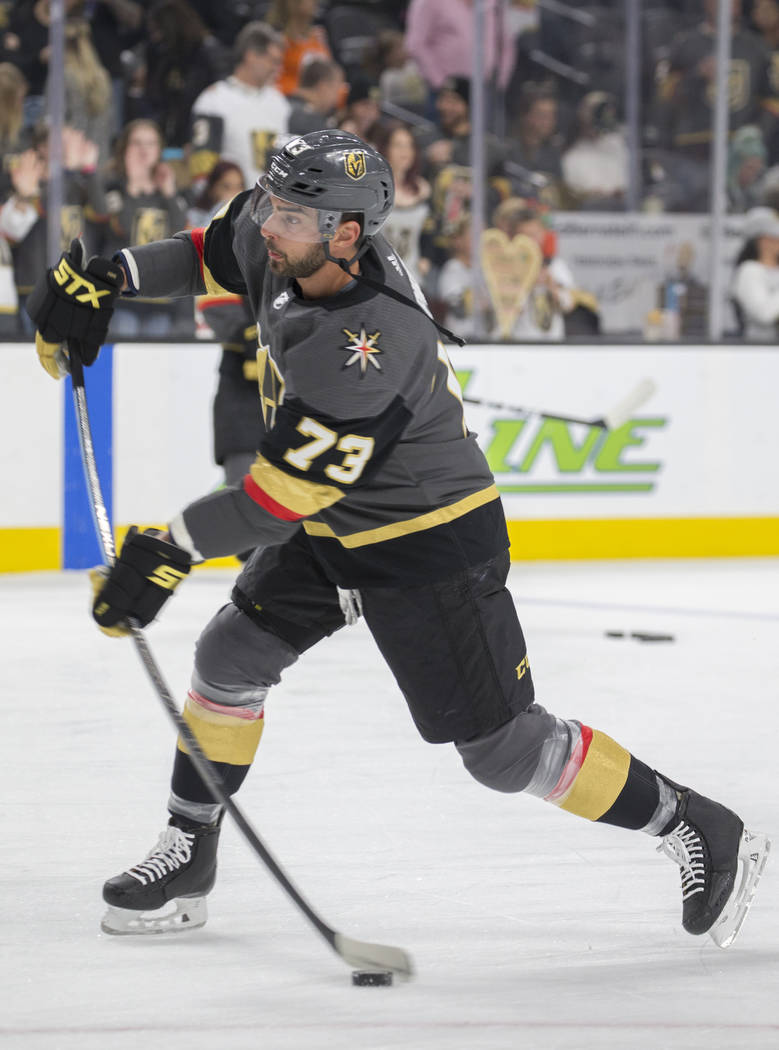 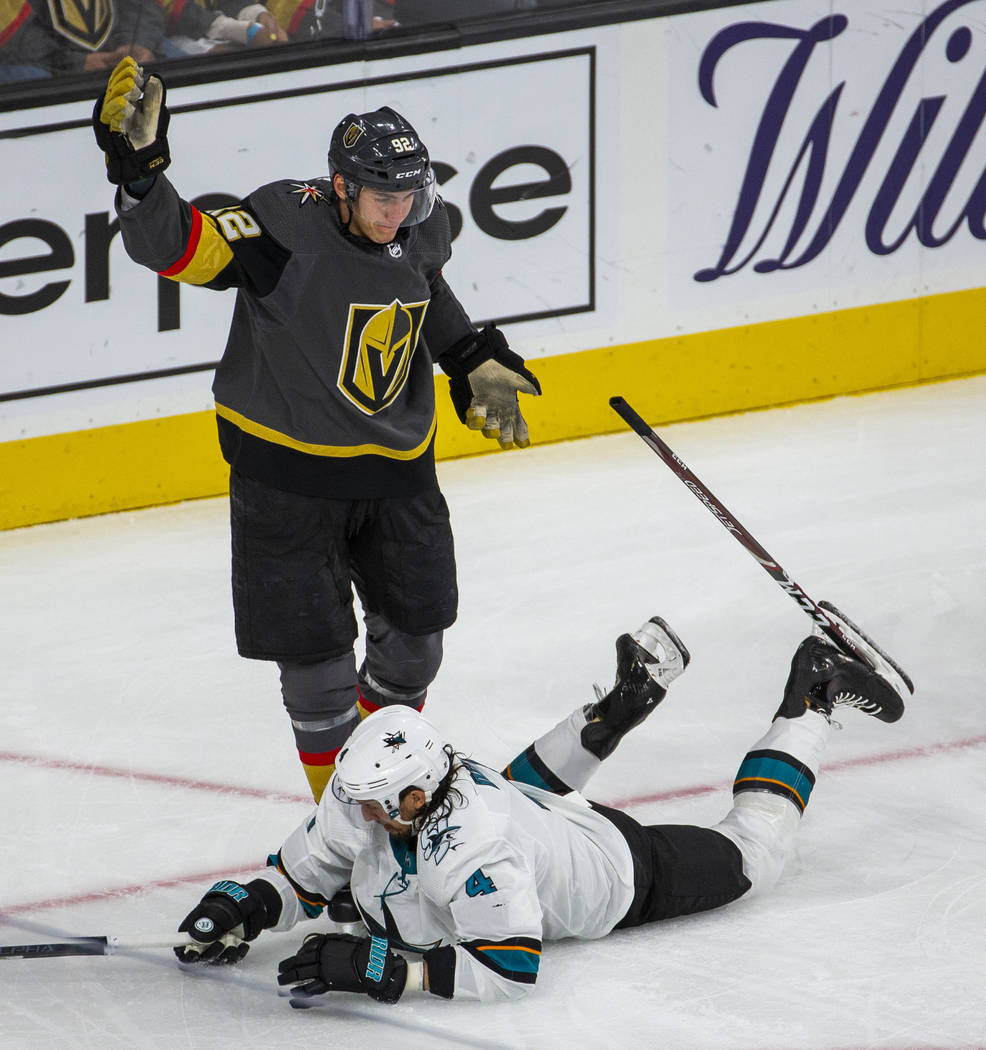 Thanks to limited cap space and a roster with few holes at the moment, the Knights simply re-signed forwards Tomas Nosek and Brandon Pirri and continued to work on a new deal with defenseman Deryk Engelland.

As a result, other players went elsewhere as center Pierre-Edouard Bellemare and forward Ryan Carpenter signed with the Colorado Avalanche and the Chicago Blackhawks, respectively.

“It’s nice to be invited to the party but respectfully decline today,” McPhee said. “We were pretty clear on who we thought we’d have back and who would roll on. We’re really happy for Carpenter and (Bellemare). They both got good deals and the term they were looking for.”

Bellemare signed a two-year, $3.6 million contract with the Avalanche. The 34-year-old was selected by the Knights in the expansion draft and was a reliable fourth-line center and penalty killer. He scored scored 15 points last season while leading the team’s forwards in average time on ice shorthanded.

Carpenter, 28, signed a three-year, $3 million contract with the Blackhawks. He played in 104 games with the Knights after being claimed off waivers in December 2017 and had a career-high 18 points last season.

“Vegas, thanks for everything!” Carpenter tweeted. “The past year and a half far exceeded any expectations we had when moving here. Forever grateful for the second chance I got in my career and to be apart of the misfits. See you again soon!”

Nosek, 26, signed a one-year, $1 million contract to stay with the Knights. He scored a career-high 17 points last season while slotting mostly among the team’s bottom-six forwards. He brings versatility because he can play center or on either wing.

“I’m so excited to be back in Vegas and very happy I signed with them and very happy to make it happen,” Nosek said. “The atmosphere there is amazing and living in Summerlin is a nice area. My wife and I are really happy there so I can’t say anything negative about Vegas so far. Very happy to be there for another season.”

Pirri, 28, signed a two-year deal worth $1.55 million. The winger was a surprising contributor last season after being called up from the American Hockey League in December. He scored eight goals in his first 11 games and finished with 18 points in 31 games.

“There were other options, but I think for me, it was about opportunity,” Pirri said. “It seemed like Vegas, with obviously them being up against the cap, they weren’t going to be able to make a big splash. For me, at a lower number, there was going to be opportunity there.”

The Knights’ remaining business involves coming to terms with unrestricted free agent Engelland and restricted free agents Nikita Gusev, Malcolm Subban, Jimmy Schuldt and Jake Bischoff using their limited cap space. McPhee said Monday that Engelland’s deal would be worked out “in the next week or so.”

“In terms of value, we know where we are with (Engelland),” McPhee said. “It’s just how we structure bonuses and that sort of thing. I don’t think there’s any real urgency to it because he knows where we are.”