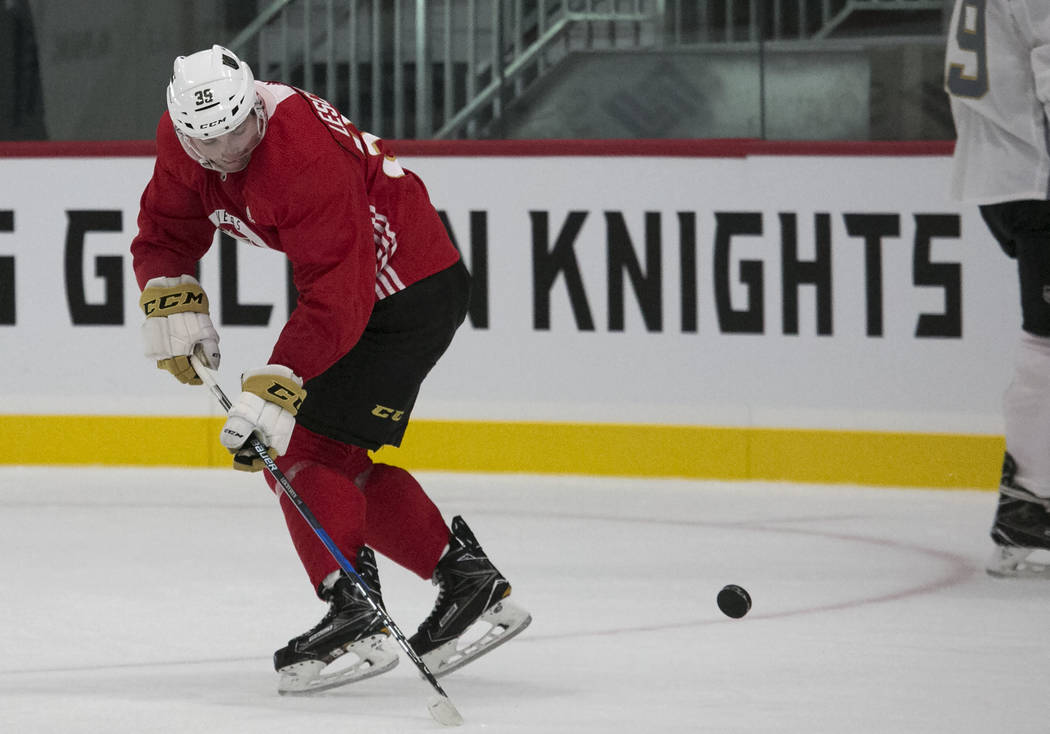 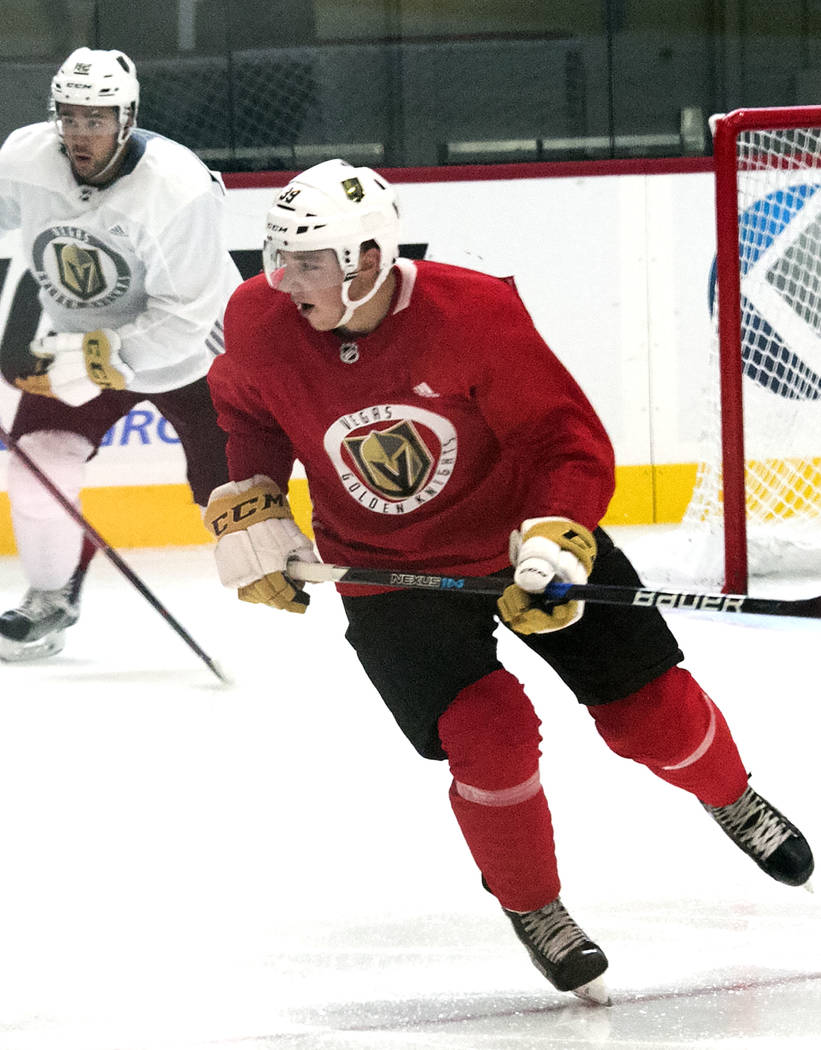 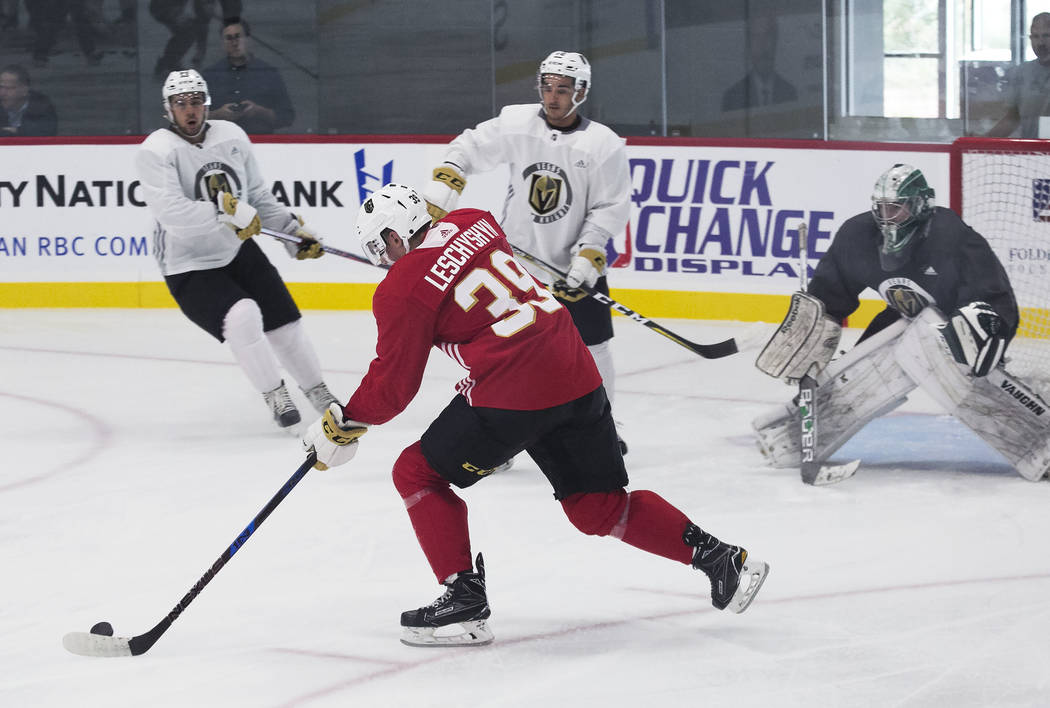 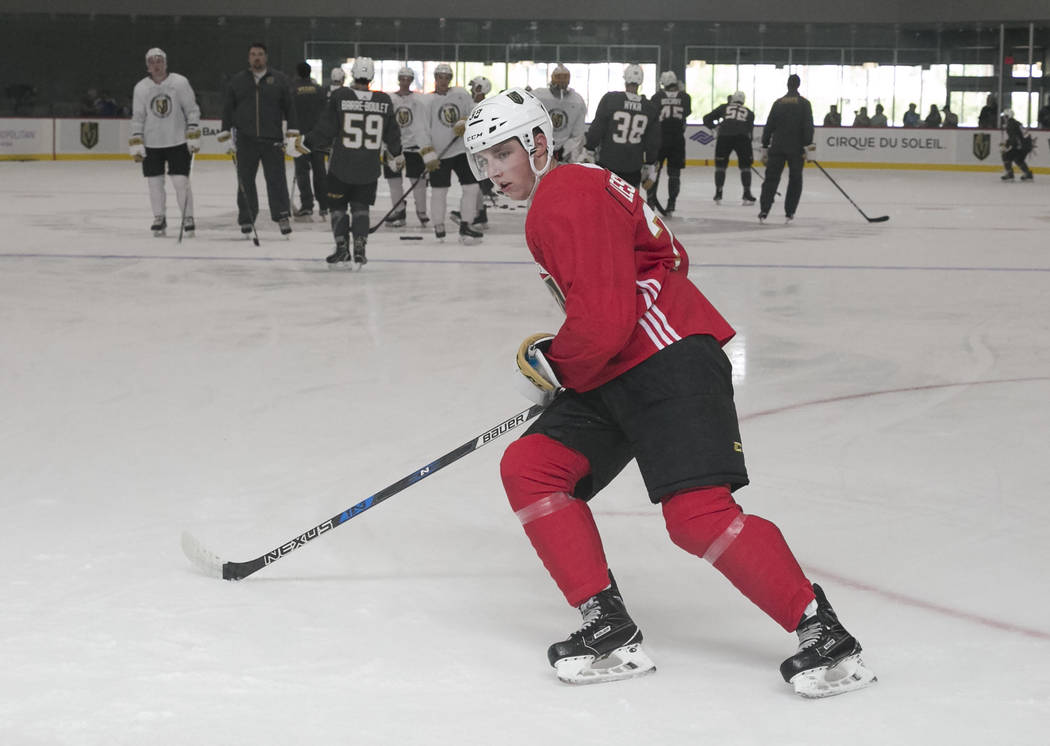 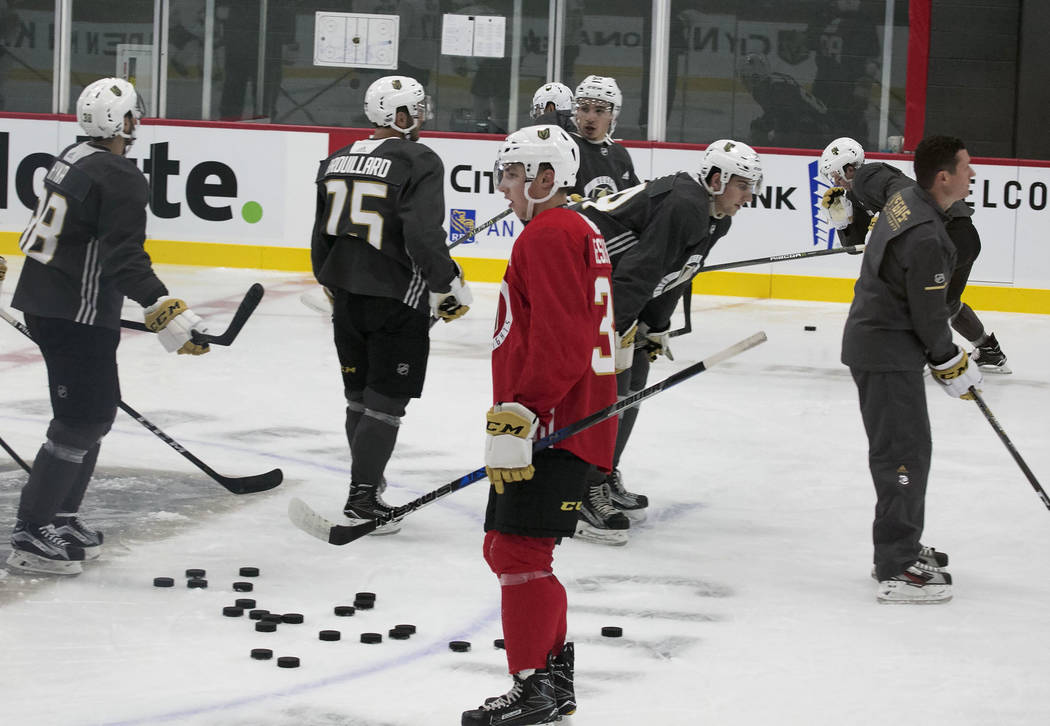 Jake Leschyshyn was easy to identify during the Golden Knights’ rookie camp.

The red, noncontact jersey he wore on the ice made certain of that.

Leschyshyn was held out of contact drills as he works his way back from a torn ACL suffered in February, but otherwise was a full participant in practices at City National Arena.

The Knights will keep their second-round pick in bubble wrap, as Leschyshyn will sit out the two games against the Los Angeles Kings rookies Tuesday and Wednesday at El Segundo, California.

“I don’t see anything on the ice that would suggest to me that he isn’t 100 percent,” assistant general manager Kelly McCrimmon said. “But when you get right down to the actual injury, the timelines, the rehabilitation, they just feel it needs a little more time.

“I think he’s real close. Likely, he’s a little bit frustrated that it’s not sooner than later, because I think it feels good when he’s skating and practicing.”

Leschyshyn was injured Feb. 3 while playing for Regina of the major junior Western Hockey League and underwent surgery on his left knee 12 days later.

Leschyshyn was the No. 42 skater in North America in the final NHL’s Central Scouting Department rankings and admitted he was concerned whether his draft stock would be affected.

“I tried my best to push it aside, but it’s always going to be in the back of your head,” Leschyshyn said. “You’re kind of unsure of what your future holds.”

The Golden Knights drafted Leschyshyn with the final pick of the second round (No. 62 overall) in June’s draft.

He did not participate in the team’s development camp in July as he continued to rehab in his hometown of Saskatoon, Saskatchewan, but was on the ice when Regina opened its training camp in late August.

“I think I’m pretty close to getting back into game shape,” Leschyshyn said. “That’s probably the next step.”

Leschyshyn’s father, Curtis, played 16 seasons in the NHL as a defenseman and won the Stanley Cup with Colorado in 1996.

“I think he’s been through all aspects of the game, from the junior level to the pro level, so he knows where I’m at right now,” Jake Leschyshyn said. “Just kind of how I (carry) myself is what’s important right now, and he’s really helped me out.”

Leschyshyn will return to Regina at the end of the Knights rookie camp, and the 18-year-old’s goal is to be in the lineup for the Pats’ season opener Sept. 22.

“If I miss a few games at the start it’s not going to be the end of the world, for sure,” Leschyshyn said. “When I’m ready, I think I won’t be holding back. I’m not going to put myself in a game where I don’t feel 100 percent.”