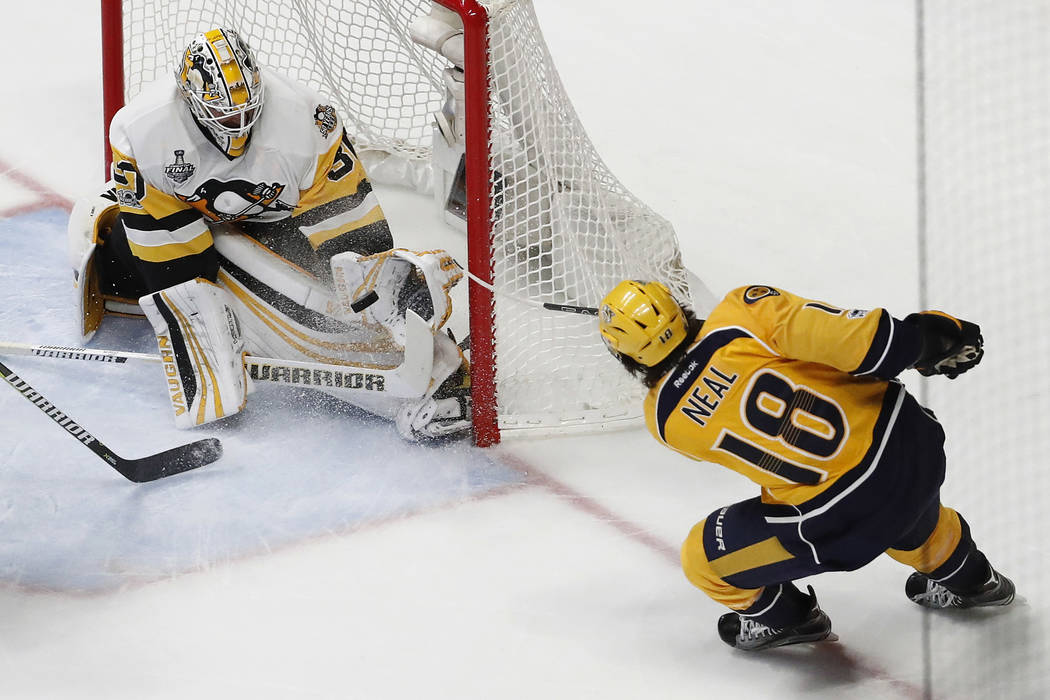 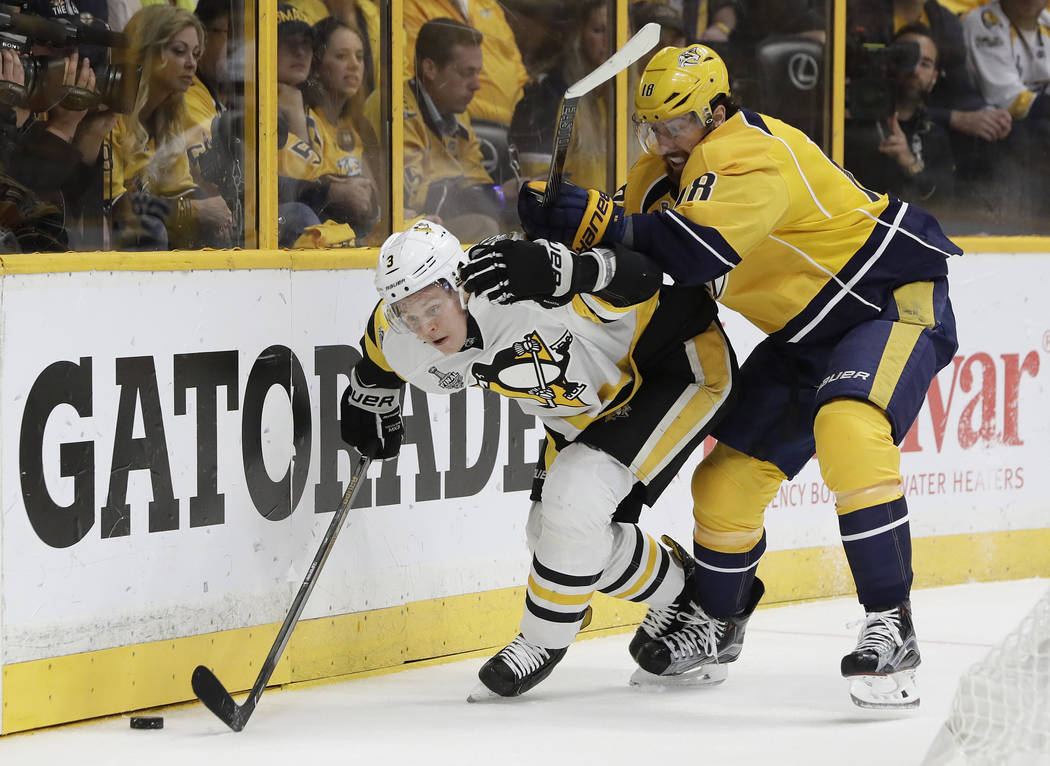 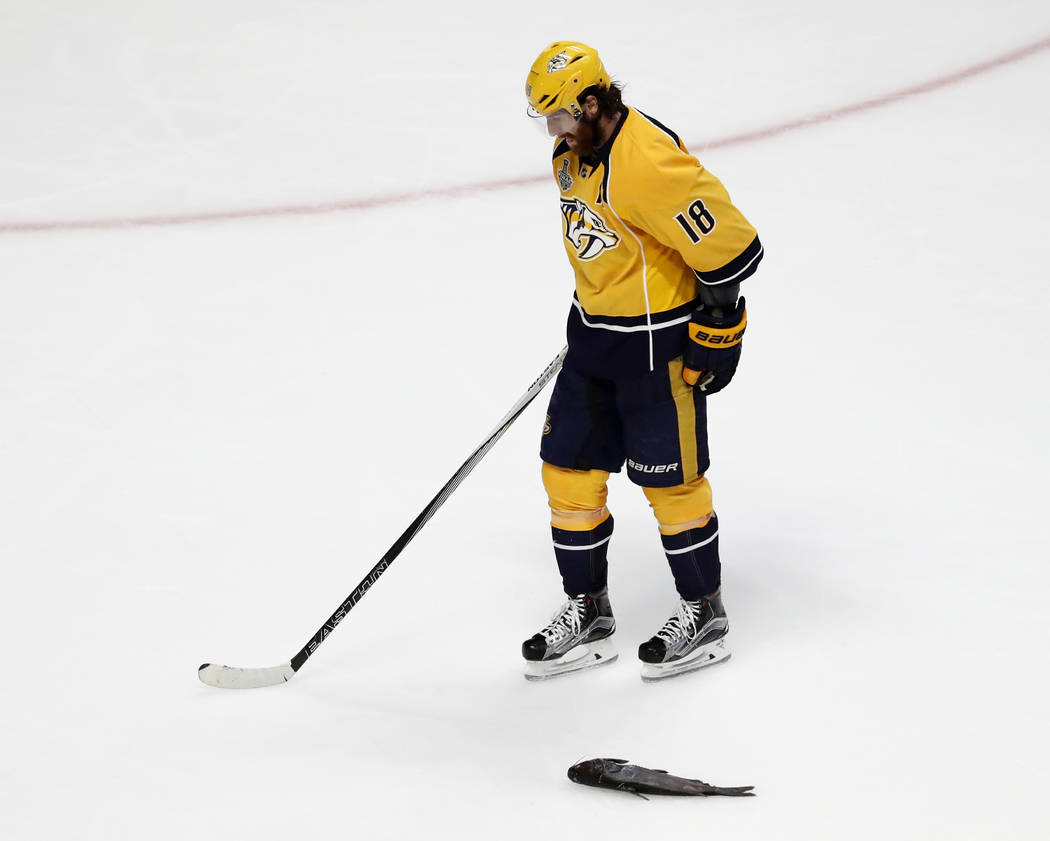 Nashville Predators' James Neal (18) skates by a catfish thrown onto the ice during the third period of Game 6 of the NHL hockey Stanley Cup Final against the Pittsburgh Penguins, Sunday, June 11, 2017, in Nashville, Tenn. (AP Photo/Jeff Roberson)

James Neal took an important step Tuesday in his attempt to get ready for the NHL season.

The Golden Knights center, who has been missing from training camp as he allows his surgically repaired right hand to heal, joined his teammates for the morning skate at City National Arena before Vegas’ preseason game against the Los Angeles Kings at T-Mobile Arena. It was Neal’s first time participating in practice.

“It felt good to be out there with the guys,” Neal said. “It’s never fun when you’re skating by yourself.”

Neal was on the ice Monday before practice with assistant coach Ryan McGill and was joined by Brendan Leipsic, who has been nursing an undisclosed injury. But Neal skated with the entire team Tuesday.

“I was trying to get a feel for the puck,” he said. “It was my first time touching a puck, and I’m trying to get my legs back. It takes time, and I’m working on it.”

Neal said he has learned to stay patient.

“Of course it’s frustrating not being out there with my teammates and not playing (Tuesday),” he said. “I hope to be out there soon.”

Neal didn’t know when he’ll be ready to play in a game. Neither did Knights coach Gerard Gallant.

“We’re not going to rush him,” Gallant said. “When he’s ready, he’ll tell us. But it was good to see him out there with his teammates participating.”

It might be premature to give a line a nickname because there’s been a lot of shuffling in the preseason. But the Knights had Erik Haula centering for Tomas Hyka, who has scored four goals in three preseason games, and Alex Tuch on Tuesday.

“Hyks (Hyka) has been playing very good,” Haula said. “Tucher (Tuch) is a big kid who creates space. So I think it could be a good line. But right now, you’re not thinking about line combinations. You’re just trying to play the game and focus on what you’re supposed to be doing.”

Gallant said the diverse styles could lead to positive results.

“They’re all good players, and we’ll try it and see how it goes,” he said.

The HTH Line was held scoreless against the Kings in a 3-2 overtime loss.

Gallant went one-on-one against goaltender Marc-Andre Fleury at the end of practice Tuesday and sent a wrister from the slot past the three-time Stanley Cup winner.

Fleury joked that he let the coach score, but Gallant said he also beat Carey Price and Peter Budaj during a practice shootout when he was an assistant with the Canadiens from 2012 to 2014.