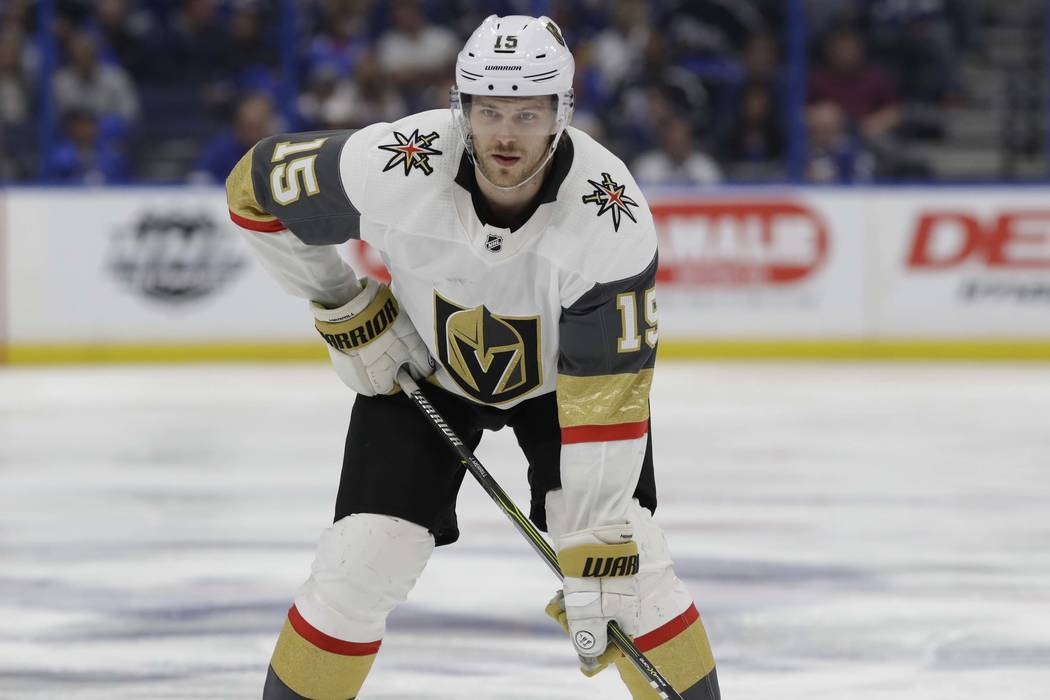 Jon Merrill lined up the pass after his skates nearly touched the end boards.

The defenseman, who once went a month without playing during the Golden Knights’ 2018-19 season, was ready to make a play against the NHL’s best team.

On Feb. 5 on the road against the Tampa Bay Lightning the 27-year-old unleashed a gorgeous stretch pass that traveled almost 120 feet from behind the Knights’ net to the far blue line and the back of teammate Cody Eakin’s stick.

Merrill insisted he was always capable of that type of play, which led to an Eakin breakaway and goal. By flashing it, he added even more imagination to an already dangerous Knights arsenal.

If that’s true, Merrill was holding some cards back early in the season. His played ebbed and flowed enough that when Nate Schmidt returned from his 20-game suspension in November, coach Gerard Gallant decided to remove him.

Merrill was on the ice for a goal scored by the St. Louis Blues on Nov. 16 and didn’t play again until Dec. 16. Once he got back in the lineup, he made sure he never left.

Merrill has played in all but five of the Knights’ games since Dec. 23 and made it difficult for Gallant to take him out. Higher-paid defensemen like Colin Miller and Nick Holden became healthy scratches while Merrill kept playing.

He was smarter on defense and more aggressive on offense. He set a career high with his 15th point March 27 against the Colorado Avalanche and was a career-best plus-16, third-best on the team. He was minus-34 for his career previously.

“I think it’s a confidence thing for him,” teammate Shea Theodore said. “The past stretch of games he’s been playing really well and he’s been getting some more minutes. I think that’s big for his confidence. It allows him to make plays he wouldn’t normally make. And when you’re feeling confident, you’re going to try and do those things.”

Merrill insists that’s not entirely the case. That he’d be whipping 120-foot passes down the ice whether he was getting consistent playing time or not. The bottom line is once he showed he could do that the Knights’ blue line changed for the better.

”I try not to dwell too much on my own game, not do a lot of thinking about it,” Merrill said. “I’m just more worried about our team getting wins. I’m having a lot of fun being a part of it every night.”