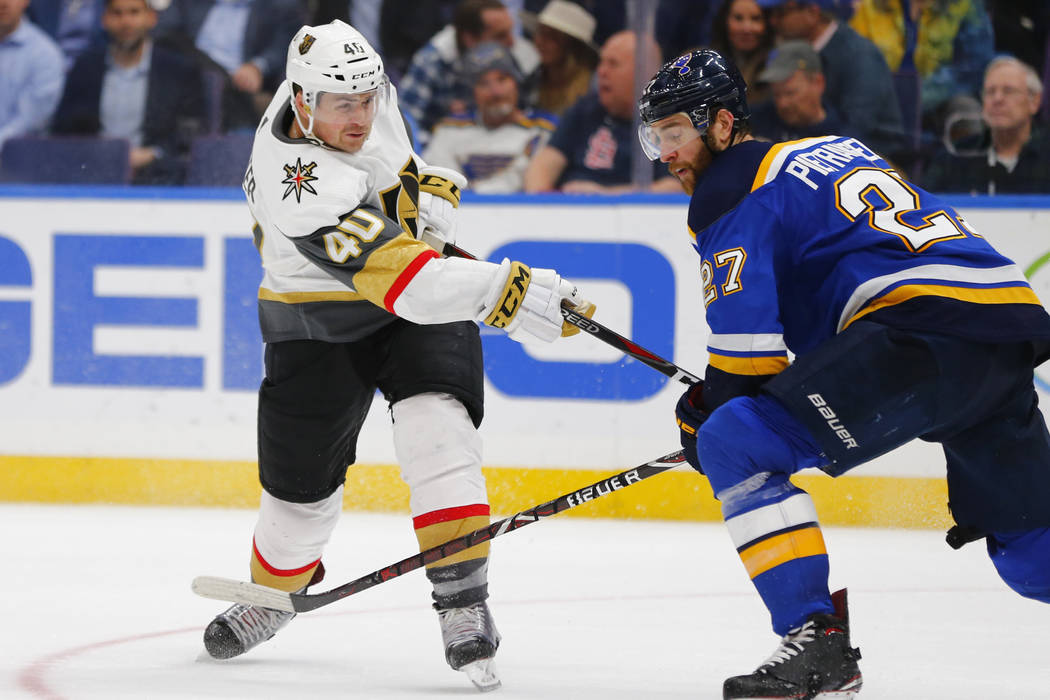 Ryan Carpenter thought the San Jose Sharks placing him on waivers in December 2017 might have been the end of his NHL career.

Instead, it was only the beginning.

The Golden Knights picked up the 28-year-old on Dec. 13, 2017 and he’s been a steady presence in the lineup this season. He took advantage of his second chance, which is why the Las Vegas chapter of the Pro Hockey Writers Association nominated him for the Bill Masterton Memorial Trophy. The award is given to the player who best demonstrates “qualities of perseverance, sportsmanship and dedication to hockey.”

“I’m an older guy and I figured if they were sending me down and they were giving some other guys looks that maybe my shot there was kind of done,” Carpenter said. “My wife and I just prayed that God would surprise us that day and getting picked up by Vegas — I still didn’t play for a while — but just to get a second chance and eventually get in the lineup, it was special.”

Carpenter played three collegiate seasons at Bowling Green State University and was in his third American Hockey League season before making his NHL debut with the Sharks at 24. He played 28 games over three seasons before they cut him loose, and the Knights were happy to snap up the defensive-minded forward.

The team didn’t make him a lineup regular for more than a month, but since then he’s appeared in 98 of 115 games. He’s one of 31 Masterton nominees, a list that will be narrowed to three finalists before a winner is announced at the NHL awards show in Las Vegas in June.

“It’s an honor,” Carpenter said. “I was picked up on waivers and just given a second chance last year to be part of a winning team. It’s been special, my time here, and I’m definitely honored to be nominated.”

The Knights are 0-2-1 in their last three games and led for just 1:05 during that stretch.

They’ve allowed the first goal in all three games, despite having a chance to clinch a playoff berth with a point in their last two.

“Just too lackadaisical,” forward Alex Tuch said. “We’ve got to come in here, we’ve got to recognize these teams are playing desperate but we have to play desperate, too. We haven’t clinched. Nothing’s going to be given to us. There’s still stuff that we can do. It’s not like we’re sealed up or anything like that.

“We’re not going to do anything in the playoffs if we’re playing like this. We have to step it up.”

The Knights will hold Autism Awareness Night on April 1 during their game against the Edmonton Oilers at T-Mobile Arena.

The team’s charity will give a $25,000 check to the Families For Effective Autism Treatment to help families with autistic children get money for treatments. Spectrum on Ice, a hockey training organization for those with autism, will also participate in a shootout during the first intermission.