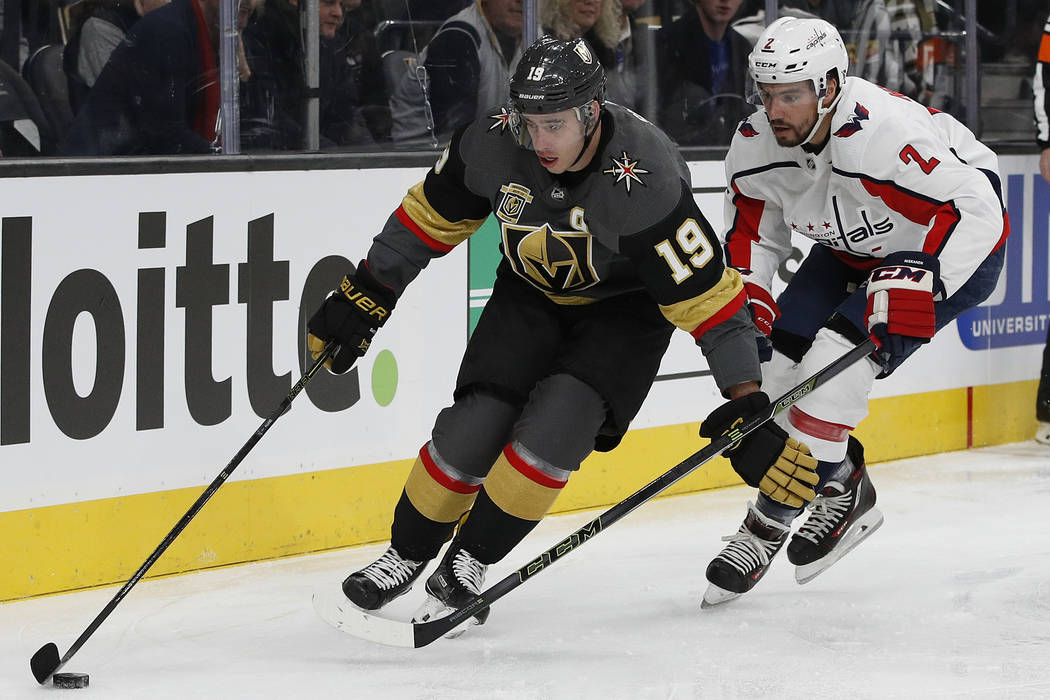 The Golden Knights may have swept the regular-season series from Washington, but the Capitals will say, “So what?”

“I don’t think it means anything,” Gallant said. “Washington’s a really good hockey team that’s playing very well, and (coach Barry Trotz) has done a great job with that team getting them to the finals.”

Still, the Knights did prove they can beat the Capitals at home and away.

Here’s a look at the two meetings between the Cup finalists:

The Knights struck early, scoring three goals in the game’s first 14:55 against Washington goaltender Braden Holtby. Alex Tuch got things rolling just 2:37 into the contest, and Oscar Lindberg made it 2-0 5:02 later.

William Karlsson, already en route to posting career numbers, scored his 16th of the year at the 14:55 mark to make it 3-0. The Knights’ speed caused problems for the Capitals, who were unable to limit Vegas’ offensive opportunities. The Knights had 17 shots on goal in the first period.

From there, Fleury took over. The Caps would have four power-play opportunities and had 17 shots over the final 40 minutes. But Fleury stymied Washington at every turn and finished with 26 saves for his first shutout with the Knights.

“I guess you pick up a few things over the years,” Fleury said. “But you can’t predict what’s going to happen. They have a lot of talented guys over there.”

Feb. 4 at Capital One Arena

The rematch was a much different game. It was a back-and-forth affair with the teams trading goals before Tuch produced the eventual game-winner with 5:12 to play.

Washington held leads of 1-0, 2-1 and 3-2 while using backup Philipp Grubauer in goal. But the Knights responded as Ryan Carpenter scored his first goal as a Knight in the first period to tie it 1-1. Reilly Smith scored on the power play in the second period to tie it 2-2. He scored again in the third to tie it 3-3, after Nicklas Backstrom had scored 52 seconds into the third to give the Caps a 3-2 lead.

Tuch’s game-winner came off a setup by Carpenter, who would make a big defensive play in the final seconds by getting his stick on the puck in the Knights’ zone just before Alex Ovechkin would have had a clean look at tying the game.

“We just kept battling, and we knew pucks were going to go in,” Tuch said of his 10th of the season. “I got a little lucky when it went off my stick and snuck between his legs.”

The Capitals challenged the goal, claiming Tuch interfered with Grubauer. The play was reviewed, and the goal stood.

Fleury made 20 saves. Two days later, he and the Knights headed to Pittsburgh for an emotional return to where Fleury had played his entire career.

There was an emotional return in Washington, too. Defenseman Nate Schmidt, who began his career with the Capitals and had been claimed by the Knights in the expansion draft, was back in D.C. for the first time and was warmly received by fans.

“I loved my time here,” Schmidt said. “It was truly a blast. I had a lot of fun here, and the support means a lot to me.”