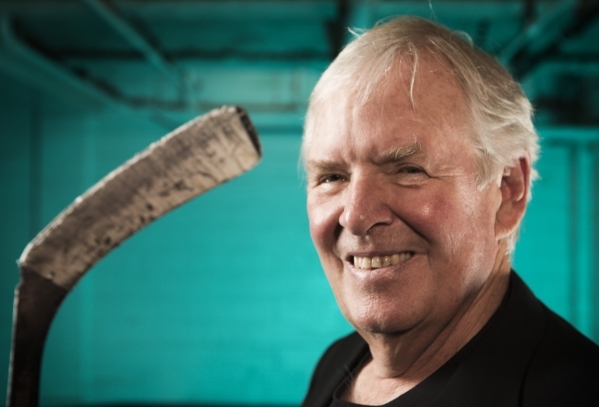 Investor Bill Foley stands for a photo at the Las Vegas Review-Journal, 1111 W. Bonanza Road, on Thursday, March 19, 2015. Foley, and his minority partners, the Maloof brothers of Las Vegas, are confident they will land a National Hockey League team in Las Vegas. The group has cleared the 9,000 ticket deposit milestone of the 10,000 deposit goal .(Jeff Scheid/Las Vegas Review-Journal)

Bill Foley doesn’t have an NHL team, but his employees will have some pretty swank offices if the league grants Las Vegas an expansion franchise.

Foley on Friday held an open house for civic and business leaders at the new building for Fidelity National Financial Ventures and Black Knight Sports & Entertainment in Summerlin at the former Don Reynolds Foundation Building on Village Center Circle.

Foley was unable to provide his guests with the news everyone wants to hear, but said he remains optimistic the NHL will accept his $500 million and award him a franchise that could begin play in 2017.

“We’re done with the vetting process, and we’re just waiting to hear from the NHL what’s next,” Foley said.

The NHL Board of Governors executive committee is expected to meet in the next few weeks. If it determines it wants to proceed with expansion, word could come when the league meets Dec. 7 and 8 in Pebble Beach, Calif. On Sept. 29 in New York, the executive committee heard a one-hour presentation by Foley and a similar expansion proposal by a group looking to return the NHL to Quebec City.

“I would expect we’ll hear something to happen in December and whether we can move forward,” Foley said.

In the meantime, Foley is trying to secure land to build a practice facility for the team. He said Black Knight Sports has a request for a proposal with Clark County for a site, but would not disclose the location. If the request is approved, Foley hopes to begin construction on the facility in June.

Foley also said two more suites have been sold at the new $375 million, 17,500-seat MGM-AEG arena under construction, and that the total amount of tickets sold is slightly above the 13,500 figure consistently cited in the media.

“What’s amazing is that I think we’ve had 10 people ask for their money back,” Foley said. “I’m so impressed by the loyalty of the Las Vegas fans and the faith they have in us.”

He also said he’s already receiving resumes from people who want to be part of his hockey organization.

“We’re probably getting five to 10 resumes every day,” Foley said. “But we’re not doing anything yet with those.”