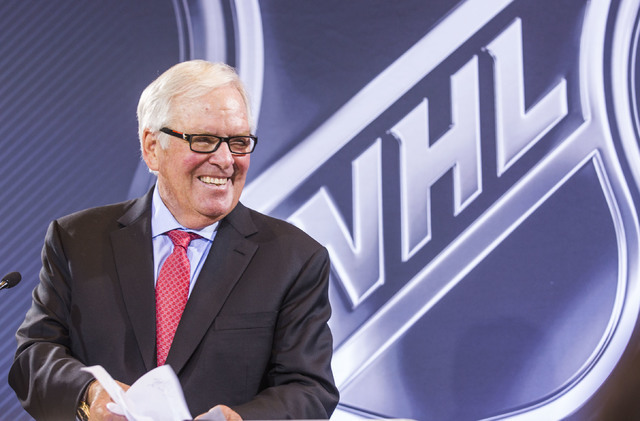 Bill Foley has seen or heard all the suggestions. He has received what amounts to ransom notes. But he’s not any closer to finding a name or color scheme for his Las Vegas NHL expansion franchise than he was a week ago.

He does, however, have a logo, albeit a temporary one. The NHL has furnished the team with an image it can use that has the league’s shield with the name “Las Vegas” underneath it.

Other sports have had temporary logos assigned it by their league prior to establishing their own name. The Tennessee Titans had help from the NFL as they transitioned from Houston to Nashville.

According to Murray Craven, Foley’s hockey advisor, the hope is to have a name, a logo, the colors and a uniform sometime in September.

“We’re exchanging names and ideas with the NHL and they’ve come back with names for us,” Craven said. “They’ve been great to us, as has adidas, who have some great ideas for uniform designs.

“But ultimately, it’s going to be Bill’s call what the name will be.”

Craven said if you hold a name, trademark, copyright or a domain name and are interested in selling it to Foley, don’t bother.

“Someone wanted $50,000 for the name ‘Desert Turtles,’” Craven said. “Somehow, I don’t see us calling ourselves the Las Vegas Desert Turtles.”

The team probably won’t be called the Wranglers or the Thunder either. Ken Stickney, whose family owned the Thunder when it played in the old International Hockey League from 1993 to 1999, still owns the rights to the name, logo and colors. The ECHL owns the name and brand of the Wranglers, who played from 2003 to 2014.

“I have not been approached by either Mr. Foley or by the NHL,” said ECHL commissioner Brian McKenna. “We own all the names of all the teams that have played or are playing (in the ECHL). Frankly, I would be surprised to hear from them now. But if they called to say they were interested in reviving the Wranglers name in Las Vegas, we would have an open mind about it. We always liked the name and the logo and the way they built up the brand in the community.”

Stickney said he hasn’t heard from anyone connected with the NHL team either.

“I’m sure they can come up with a better name,” he said. “But if they ever decided to want to use the ‘Thunder’ name we’d be honored to see the name used again in Las Vegas.”

The Las Vegas NHL team does own the copyrights, trademarks and domain names to a few names, most notably “Silver Knights.” Craven said that no decision has been made but the NHL was not opposed to Silver Knights.

“We met with the NHL recently (in Montana) and they haven’t gotten back to us yet,” Craven said.

Craven, who played 18 NHL seasons with Detroit, Philadelphia, Hartford, Vancouver, Chicago and San Jose, said he likes a clean look for a uniform.

“You want a simple, classic design,” he said. “Toronto has that with the maple leaf. Detroit has that. Boston with the ‘B’. The Blackhawks. It’s very important you get the right look because it’s how people identify with your team.”

Craven said he understands the anxiousness on the part of the fans to have their team name and brand established. But Foley wants to get it right and if it takes a little longer to do so, then so be it.

“Everyone wants the name announced,” Craven said. “We’re dying for it too.”