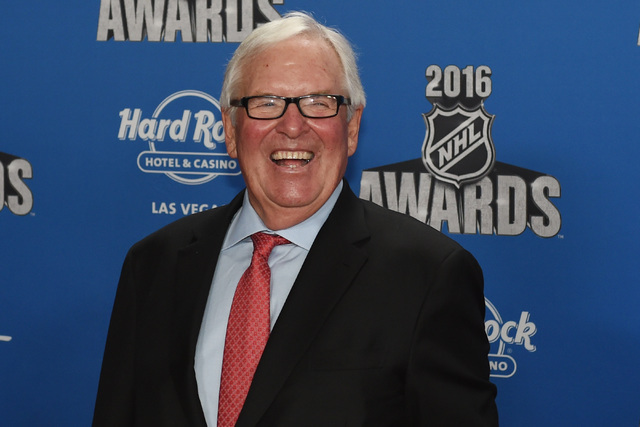 Businessman and recipient of the NHL expansion for Las Vegas Bill Foley appears on the red carpet prior to the annual NHL Awards program Wednesday, June 22, 2016, at the Hard Rock Hotel and Casino in Las Vegas. (Sam Morris/Las Vegas News Bureau)

Las Vegas’ NHL team will definitely have the word “Knights” in it but everyone will have to wait until next month for the official reveal of the full name along with the logo and the team uniform.

Bill Foley, owner of Las Vegas’ NHL expansion team, talked about the name and uniform in an interview with Sportsbook Radio (and reported on in the Hockey News).

He said to Brian Blessing, of Sportsbook Radio, that much about the name and the look and feel of the team has already been decided.

Foley said to Blessing, “We have our colors picked, we have our basic logo picked, but it’s going to need some refinement. We have moved some color schemes around, and the team will be something Knights. K-n-i-g-h-t-s. We have the name. The name is trademarked, we have the domain name. That’s all I can say right now.”

The team will begin play at T-Mobile Arena on the Strip next year.