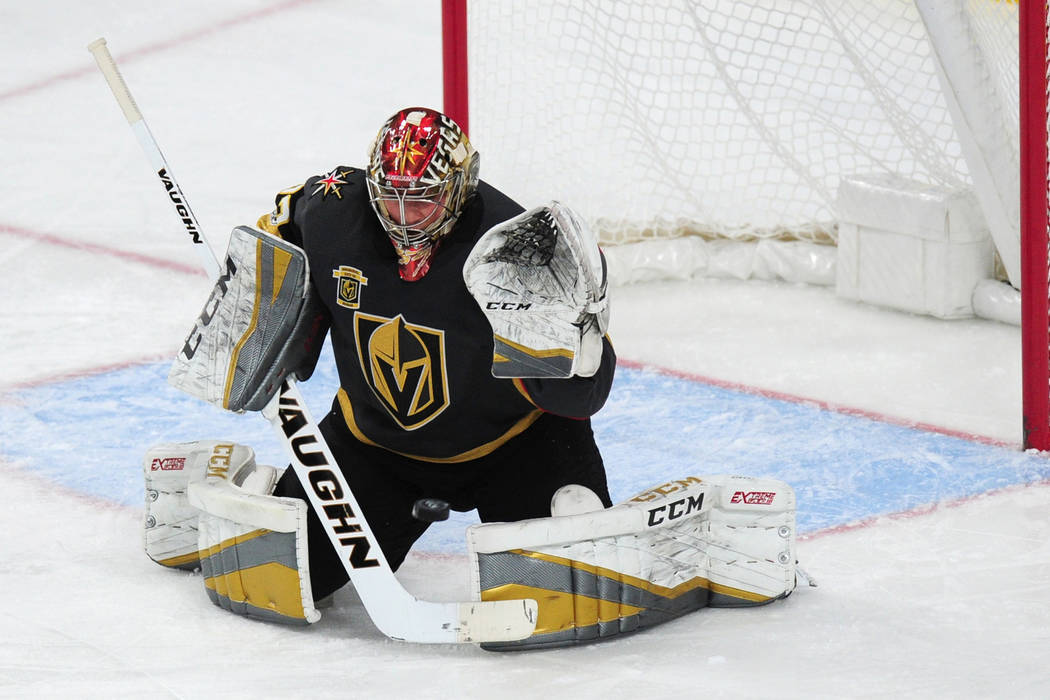 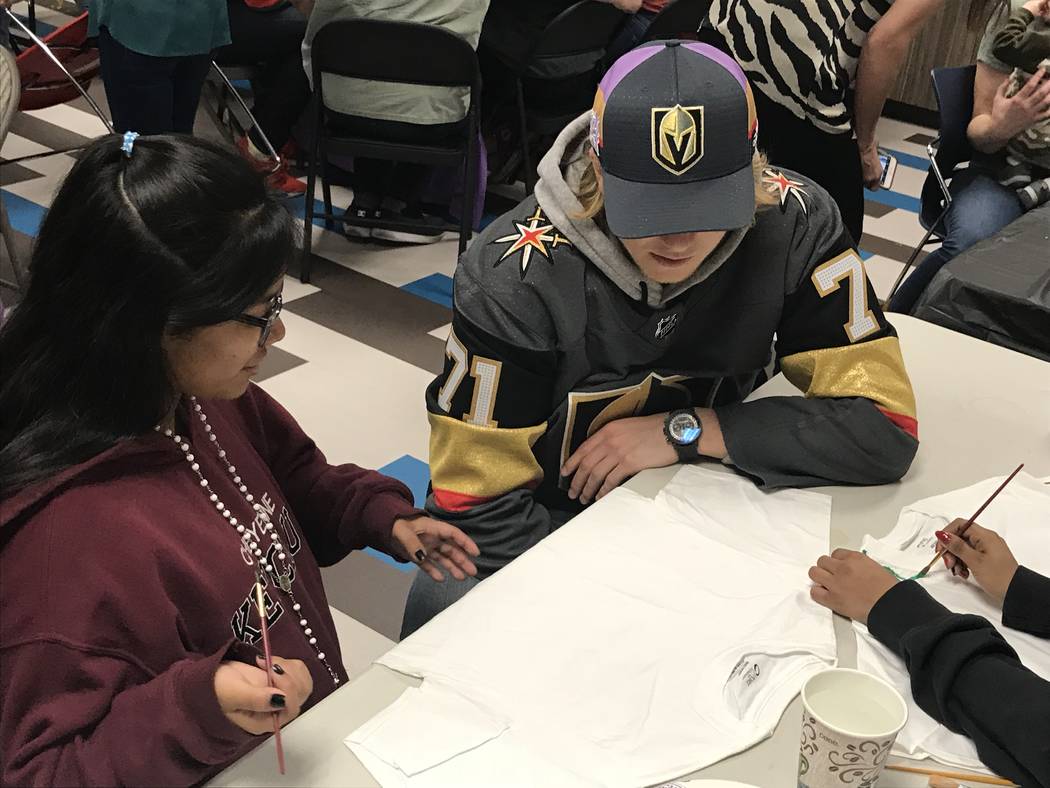 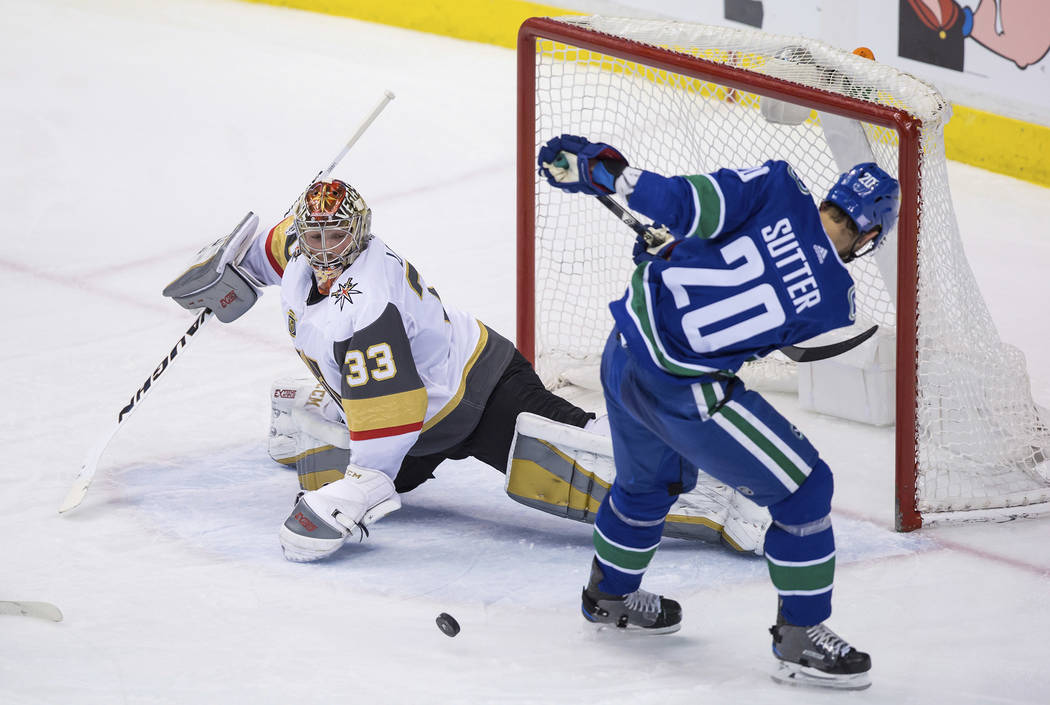 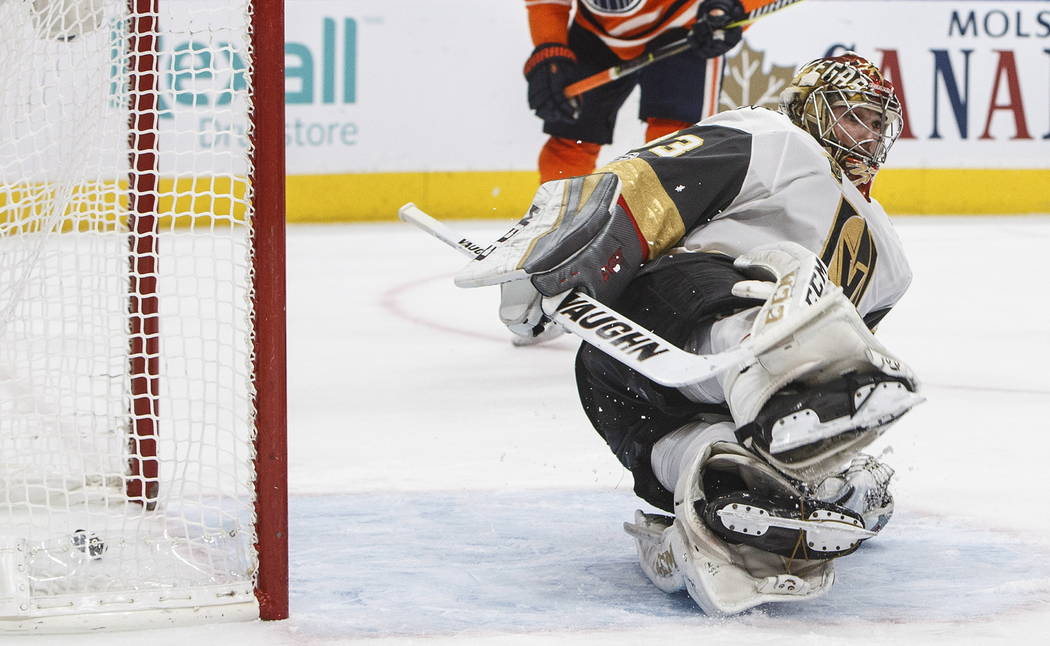 Vegas Golden Knights goalie Maxime Lagace (33) is scored on by the Edmonton Oilers during the second period of an NHL hockey game Tuesday, Nov. 14, 2017, in Edmonton, Alberta. (Jason Franson/The Canadian Press via AP) 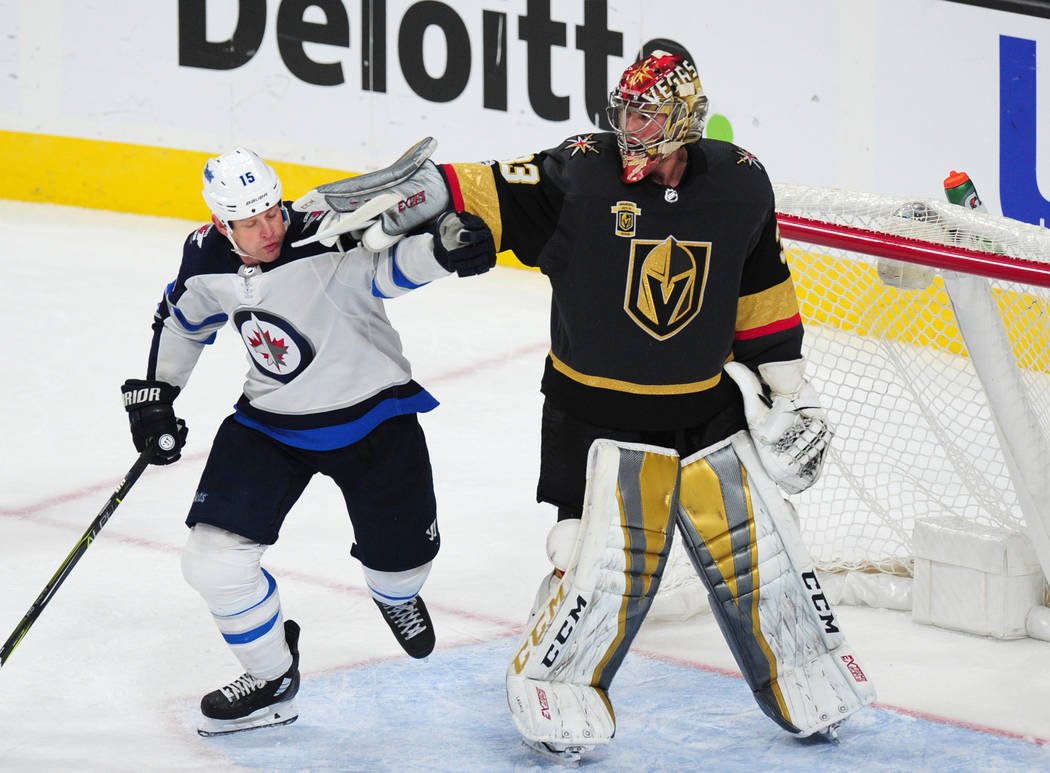 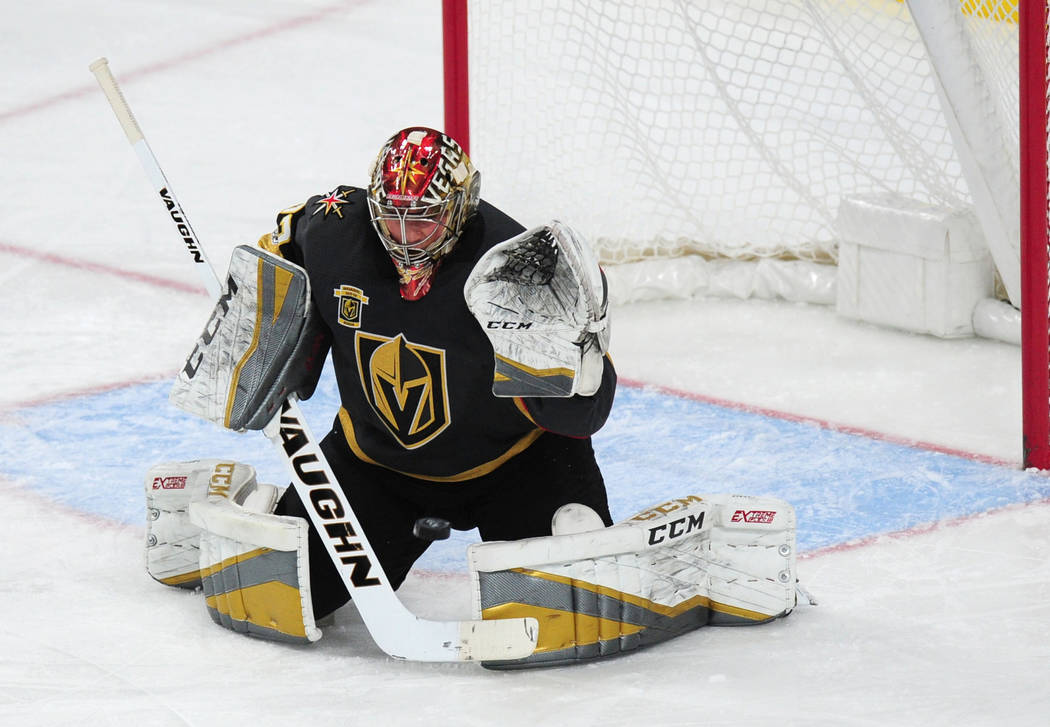 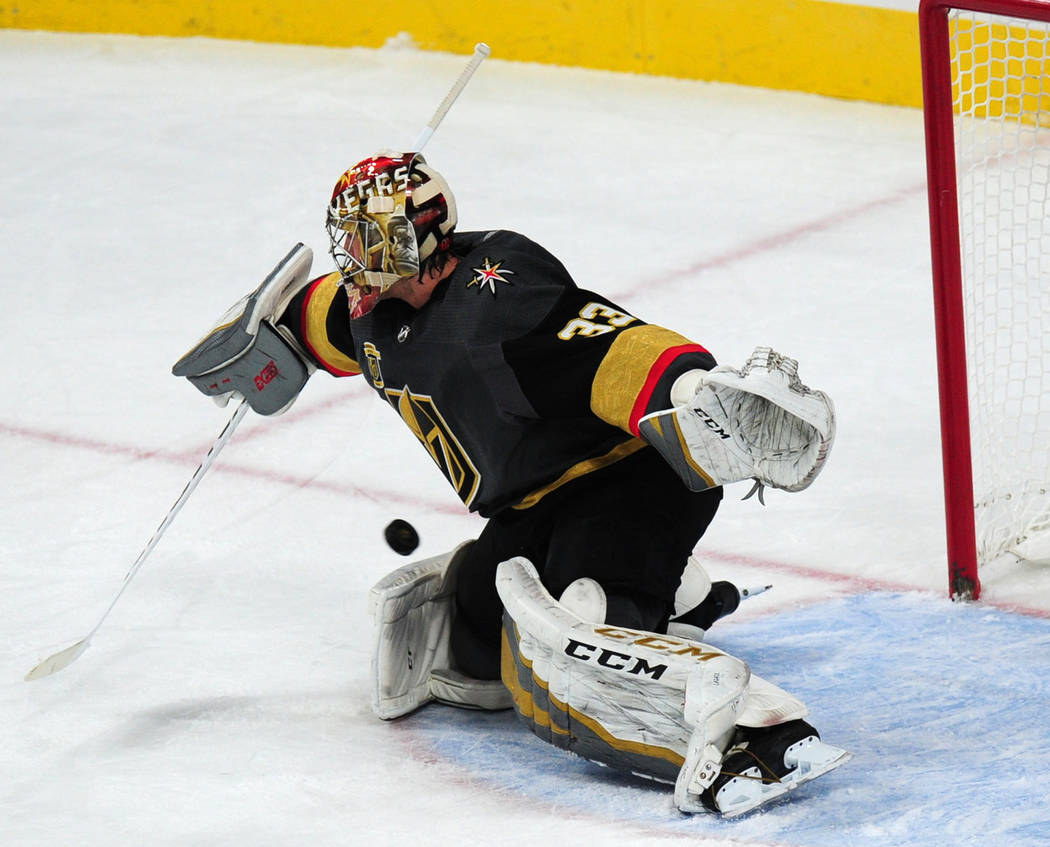 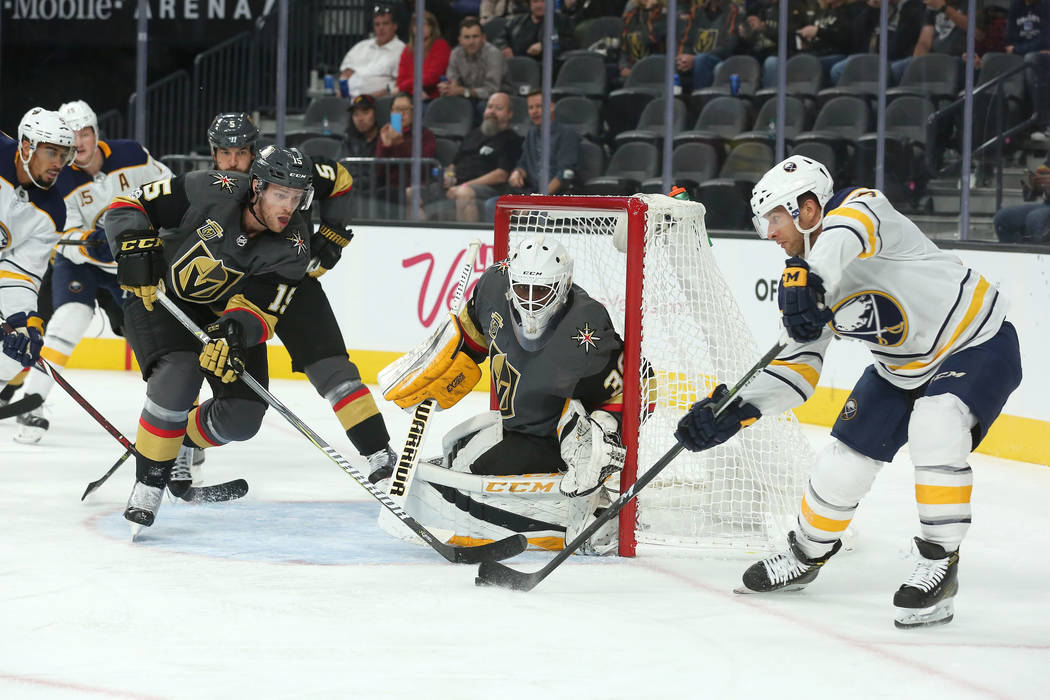 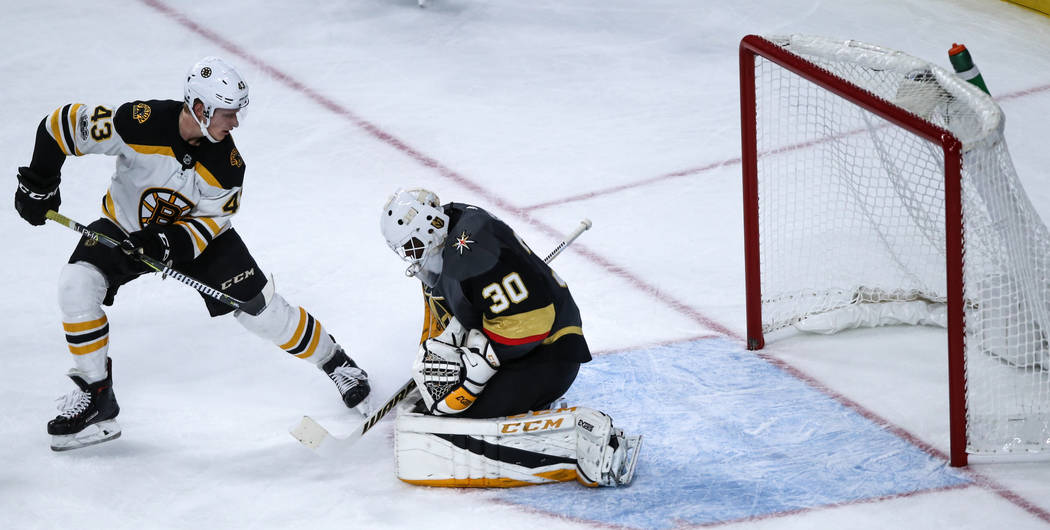 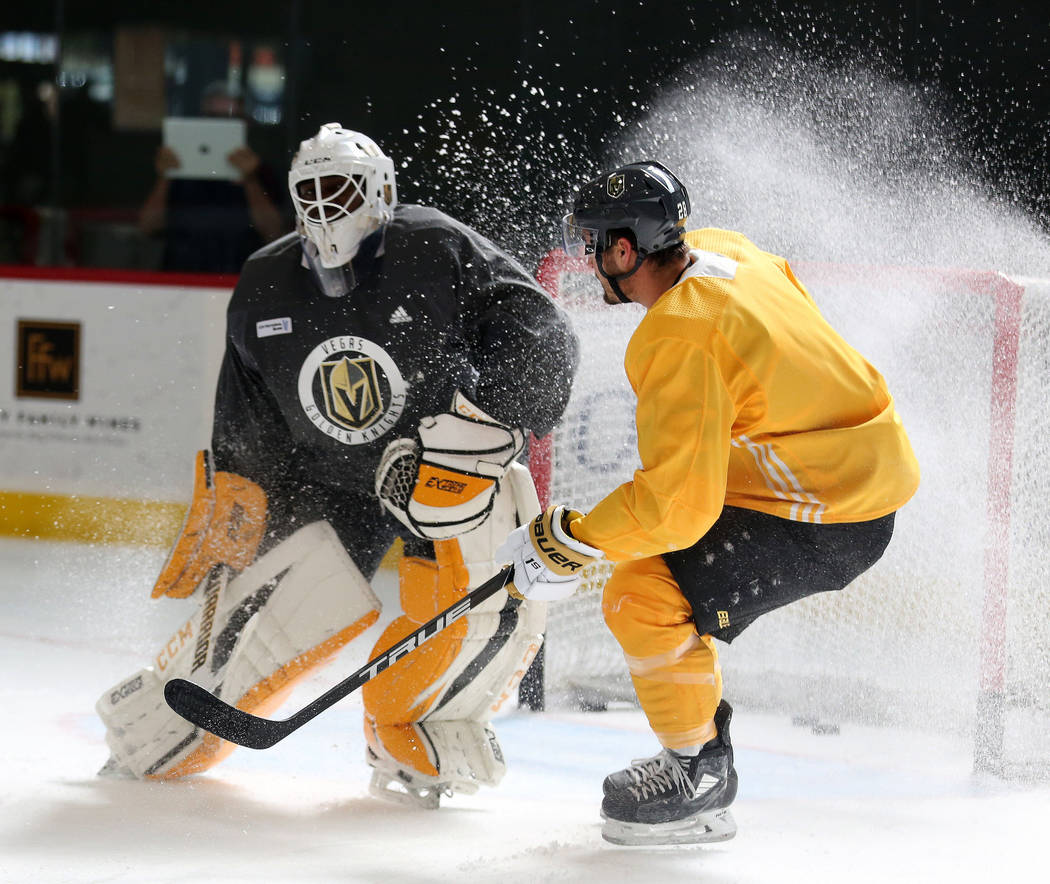 Whose net is it?

That’s the question everyone wants to know as the Golden Knights return to T-Mobile Arena on Sunday to host the Los Angeles Kings at 5 p.m.

Will Malcolm Subban return in goal after missing 11 games with a lower-body injury? Or will Maxime Lagace, who has started the past eight games, remain in the crease?

Both said they will be ready.

“I want to get back in the lineup and play,” Subban said after Saturday’s practice at City National Arena, where he was a full participant. “But a lot comes with that. A lot of hard work, getting your game back in practice.”

Coach Gerard Gallant wouldn’t talk about the situation. But with Subban having been taken off injured reserve and Dylan Ferguson having returned to his junior team in Kamloops, British Columbia, at least there’s now a pathway to start Subban.

“I know who we’re going to start,” Gallant said. “I’ll let you know before (Sunday’s) game.”

Lagace is coming off a 19-save effort in Thursday’s 5-2 win at Vancouver. And while his numbers aren’t great — 3-5-1 with a 3.87 goals-against average and an .864 save percentage — he has played well when his defensemen have done their jobs and cleared rebounds and limited second- and third-chance opportunities.

“I feel like we work together really well,” Legace said of teaming with Subban. “It’s good to have him back.”

Ferguson was in goal Friday and stopped 23 shots in the Kamloops Blazers’ 6-2 home win over the Vancouver Giants.

The players participated in painting T-shirts with 50 patients, posed for photos and signed autographs.

The NCCF, which has been helping pediatric cancer patients since 1993, has more than 45 programs and services.

The Knights will celebrate Hockey Fights Cancer Night on Nov. 28 against Dallas at T-Mobile Arena. Players will wear special lavender uniforms in the warmup, which will be auctioned off, with a portion of the proceeds going to the NCCF. Several patients will accompany the players on the ice in a special pregame ceremony.

The foundation is supported through grants and donations. For more information, go to nvccf.org.

Defenseman Luca Sbisa did not practice Saturday and remains on injured reserve with a lower-body injury. Also, Gallant had no definitive update on goaltenders Marc-Andre Fleury, who has been out since suffering a concussion Oct. 13, and Oscar Dansk, who suffered a lower-body injury Oct. 30.