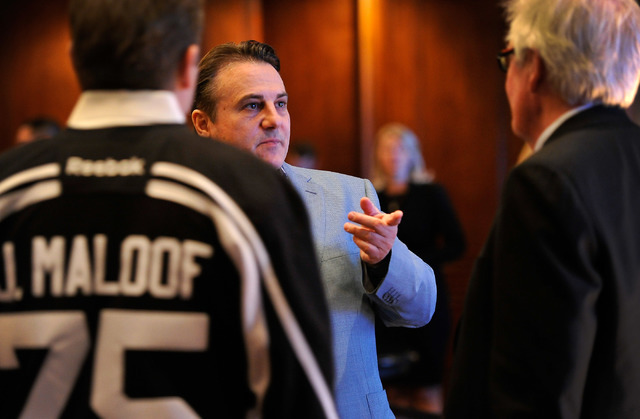 The ink on the $535 million check written out to them had barely dried when Joe and Gavin Maloof called NHL commissioner Gary Bettman in November 2013.

The former owners of the NBA’s Sacramento Kings already were going through withdrawal from not owning a pro sports team. They wanted to get back in, this time with hockey. Could Bettman accommodate them?

Bettman, whose relationship with the family goes back to the 1980s when the Maloofs owned the Houston Rockets and Bettman was part of the NBA’s legal counsel, suggested they give Bill Foley a call.

“We had no idea who Bill Foley was,” Gavin Maloof said. “But Gary said, ‘Talk to Bill.’”

Foley, a billionaire who oversees Fidelity Financial and many other businesses, wanted to get into professional sports. He had approached Bettman about putting a team in Las Vegas, either through expansion or relocation.

Foley and the Maloofs talked, then met in Jacksonville, Florida, a few weeks later.

Today, they own a hockey team. Foley is the majority owner with 85 percent, with the Maloofs owning the remainder.

“We love sports,” Joe Maloof said. “And we love Las Vegas. This is the biggest thing to ever happen for the city, and we wanted to be part of it.”

The Maloofs are comfortable with their role. They will let Foley be the face of the franchise. They have no plans to tell the general manager whom to draft or the coach to play which goalie on a given night.

They’ve done few interviews since joining Foley, because as minority owners, they don’t think it’s their place to speak publicly about the team.

“This is about supporting Bill and supporting the city,” Joe Maloof said. “Bill’s the boss.”

Gavin Maloof said: “We’re very proud of what this can be for the city. It brings a new energy, and it can bring everyone together.

“We want to be ambassadors for the team and get people excited about hockey.”

The Kings were one of the NBA’s struggling franchises when the Maloofs bought them in 1998. But through the draft, trades and hiring of Rick Adelman as coach, Sacramento suddenly shed its losing history.

But while having success on the court, they were fighting a losing battle to replace Arco Arena in Sacramento. They knew a new arena would be vital to the franchise’s long-term success, and after several failed attempts at an arena project, along with a look into relocation, the Maloofs eventually sold the team to businessman Vivek Ranadive in 2013.

The transaction came after the NBA turned down the proposed sale to Seattle billionaire Chris Hansen, who was going to move the team to Seattle to replace the Supersonics, who had bolted for Oklahoma City in 2008.

By then, the Kings had gone back to their losing ways. Many fans had soured on the Maloofs, who had taken a terrible beating in the media for the way they handled things before getting out.

“It had become so frustrating,” Joe Maloof said. “We wanted it to work in Sacramento. We just couldn’t get the arena built.”

Gavin Maloof said: “Anytime you bring up the word ‘arena’ or ‘stadium,’ you’re going to have controversy. Believe me, we never wanted to leave. But when we couldn’t get the new arena, we had no choice but to sell.”

As owners of an expansion hockey team, the Maloofs said it’s going to be a new experience, one they intend to enjoy.

“It’s a new frontier for us,” Gavin Maloof said. “We’ve been in basketball our entire lives. But we’re excited about being part of this. We believe it’s going to work here in Las Vegas. We’re people like anyone else. If they can support teams in Los Angeles and San Jose, why not here in Las Vegas? People here know and love hockey.”

Joe Maloof said: “We studied this for 2½ years, and we know the interest is there. When we launched the season-ticket drive and sold 5,000 tickets the very first day, we knew we had a winner.”

And as excited as they are about being part of Las Vegas sports history, the Maloofs are equally excited about partnering with Foley.

“It was a good fit,” Joe Maloof said. “He’s a straight-forward, regular guy who happens to have a lot of money.”

Gavin Maloof said: “Lots and lots of money. He’s such a casual, laid-back guy. It was an instant hit.”

It also gave the Maloofs some normalcy in their lives again.

“Sports are our lives,” Gavin Maloof said. “I think being part of this enhances our legacy.”