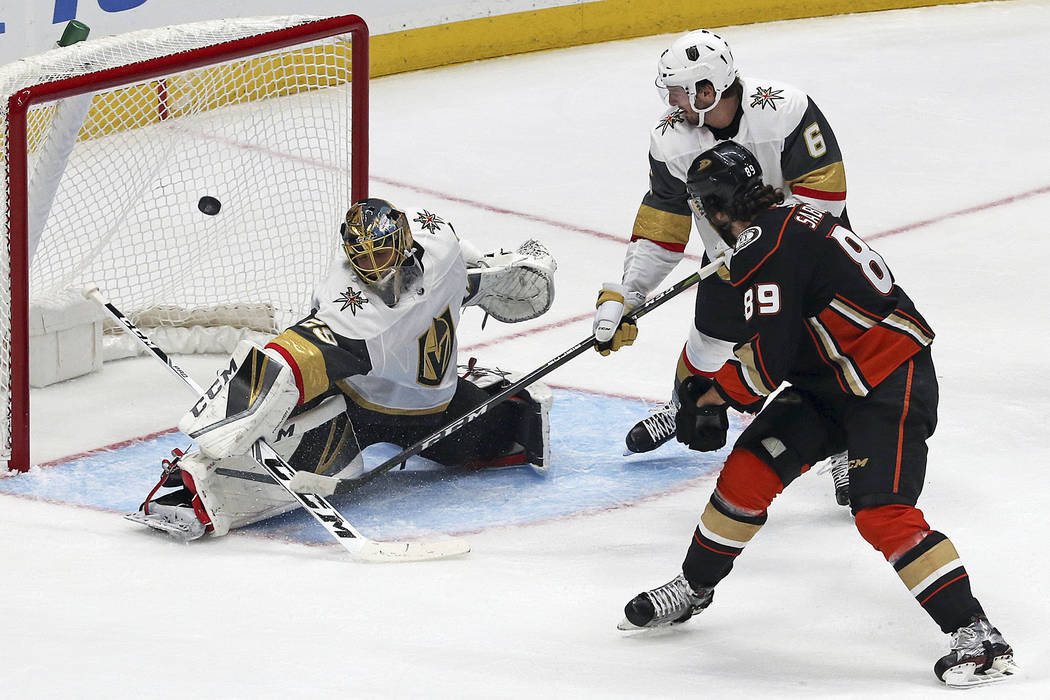 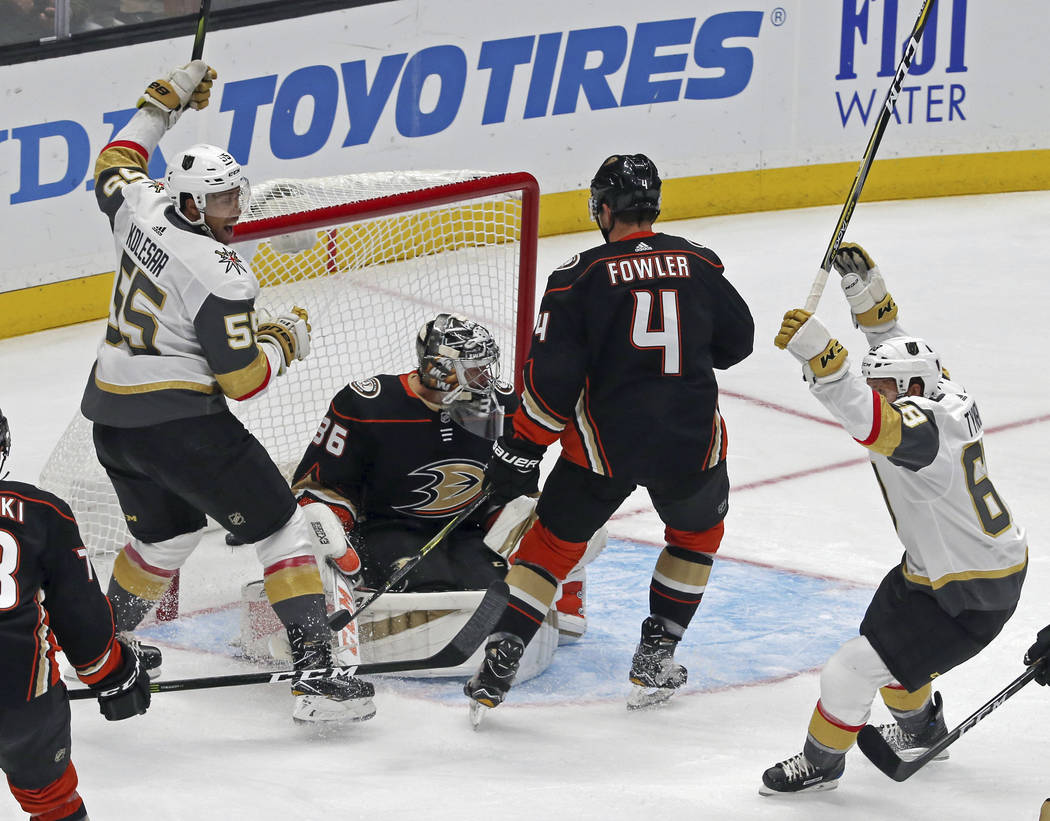 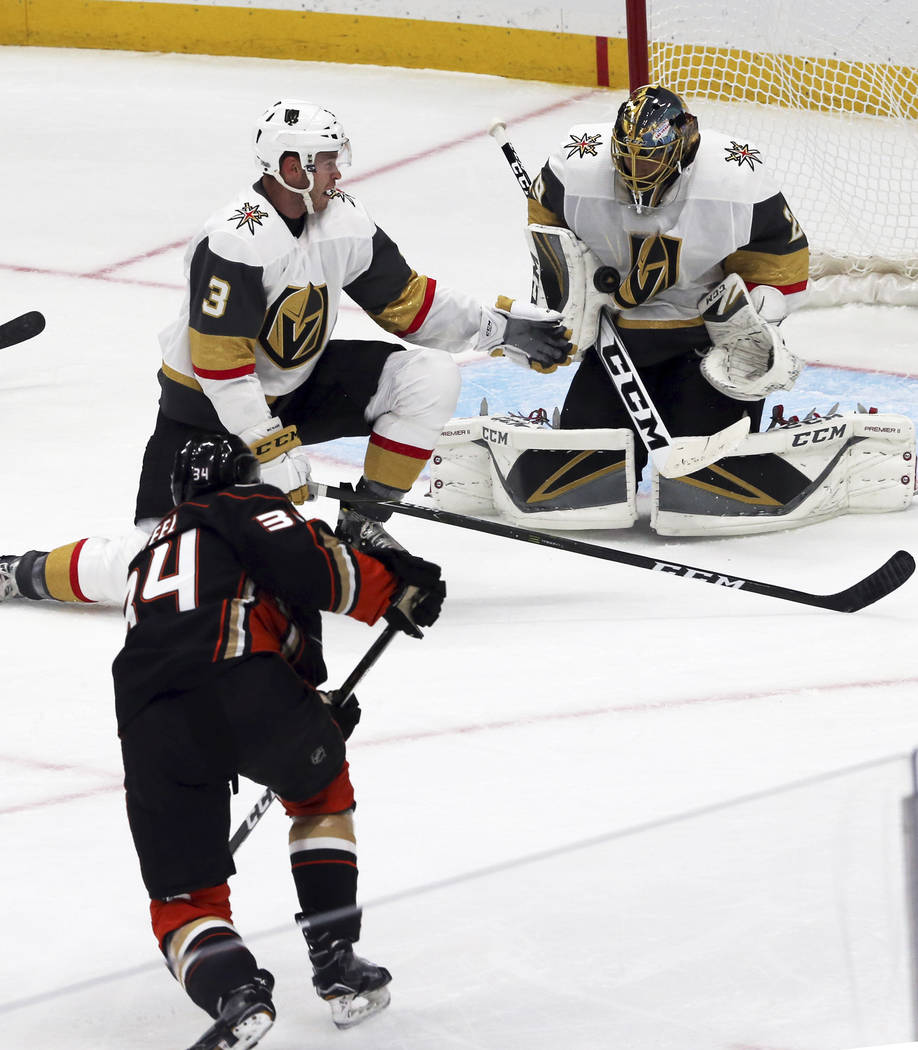 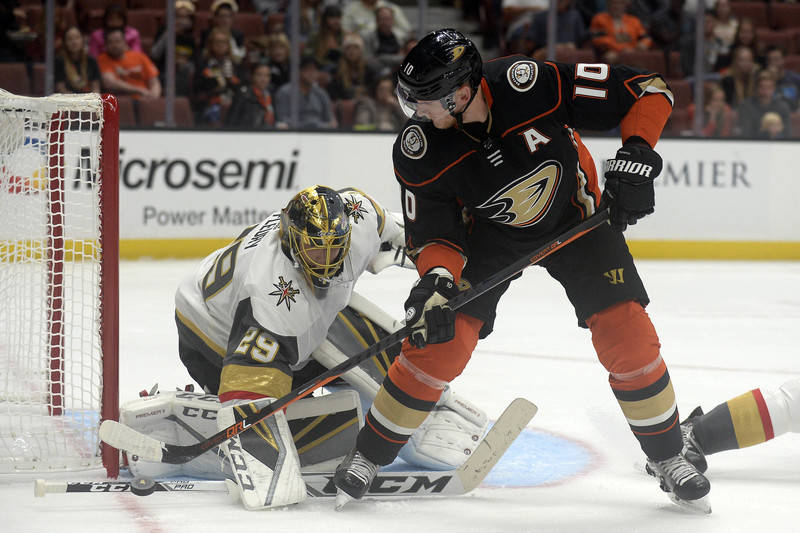 ANAHEIM, Calif. — The moment Marc-Andre Fleury had been looking forward to ever since he heard his name announced at the expansion draft on June 21 finally happened.

The 32-year-old goaltender made his debut for the Golden Knights on Sunday and looked like his old self. Fleury, a three-time Stanley Cup winner in Pittsburgh, delivered with 26 saves, several of the spectacular variety, in a 4-2 preseason triumph over the Anaheim Ducks before an announced crowd of 15,442 at the Honda Center.

With the road portion of their schedule behind them, the Knights, 3-1 in the preseason, play their first home game Tuesday when they host the Los Angeles Kings at 7 p.m. at T-Mobile Arena.

“It felt good,” Fleury said. “I’ve been waiting to get some of the rust off, and the guys played really well in front of me.

“We have three games left. Hopefully, I can play a couple more. But that’s up to the coach.”

Coach Gerard Gallant said: “(Fleury) was the difference (Sunday). He came up with some big saves.”

His defensemen enjoyed playing in front of him.

“It was a blast,” said defenseman Jake Bischoff, who had a first-period goal. “You can tell he’s really confident. Nothing seems to bother him.”

Fleury had not played in the previous three preseason games, but he needed to get some work in preparation for the team’s Oct. 6 season opener in Dallas.

He was sharp and appeared to communicate well with his defensemen. However, the Ducks’ second-period goal was the result of miscommunication in front as Scott Sabourin was able to jump on the loose puck and lift a backhand shot past Fleury to make it 3-1 at the 11:52 mark.

“Yeah, we’ve got a few little things to work on,” Fleury said. “But I thought we communicated pretty well.”

The Knights had got first-period goals from Teemu Pulkkinen and Bischoff and a deflection by Tomas Hyka past John Gibson in the second period in building a 3-0 lead. For Hyka, a free-agent left wing, it was the third straight game in which he has scored. With four goals overall he continues to build his case to earn a spot on the opening-night roster.

“He always seems to be in the right place,” Gallant said of Hyka. “He finds a way to make plays, and he’s looked really sharp out there.”

With his teammates providing him with the lead, Fleury took care of the rest. He stifled the Ducks from in close, coming up with big stops, such as the one 7:56 into the third period when he came across his crease to deny Max Jones’ one-time shot from inside the left faceoff circle. He got beat in-close by Giovanni Fiore with 25 seconds to play, but at that point the outcome was already decided.

”I felt I got better as the game went on,” Fleury said. “I started to feel more comfortable. The more action I saw, the better I felt.”

For Fleury, he’s going to have to get comfortable playing against Anaheim and the rest of the Pacific Division more than the two times a year he was accustomed to when he was with the Penguins. So Sunday was a chance for him to get a little more familiar with Ryan Getzlaf, Corey Perry, Cam Fowler and the rest of the Ducks.

“It’s good to see them in the preseason,” Fleury said. “They’re a good team, and it’s a tough division to play in.”