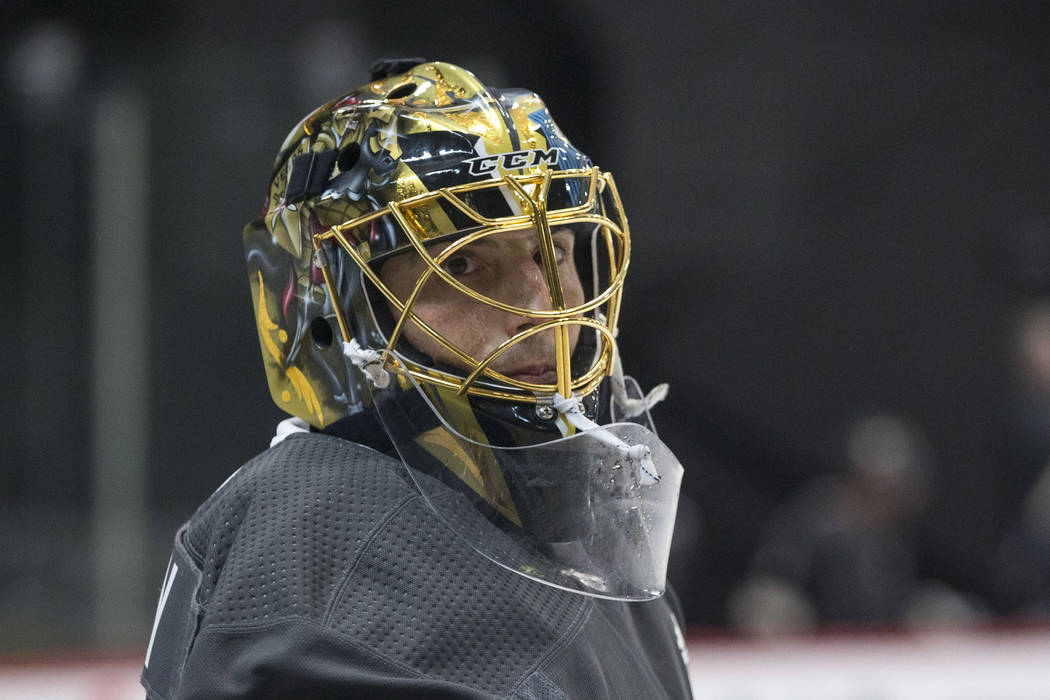 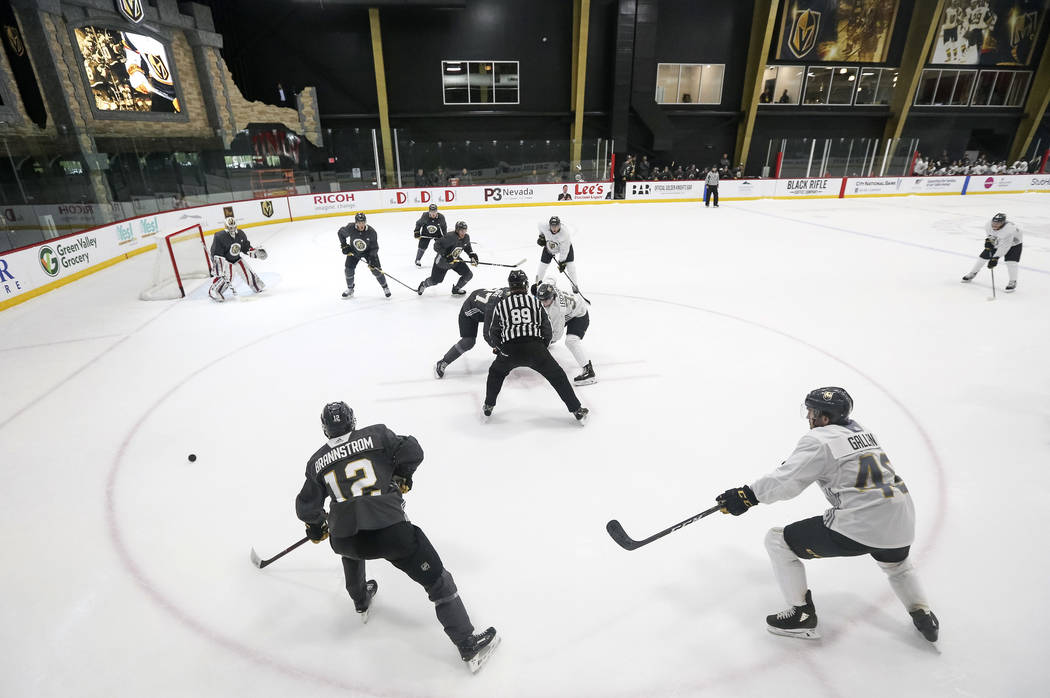 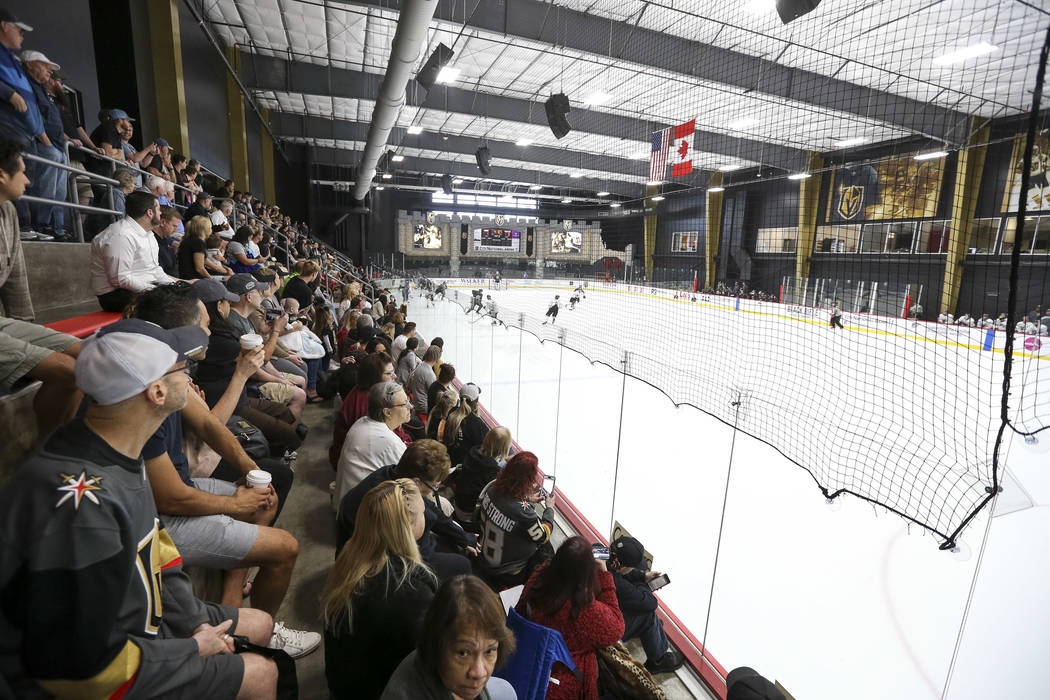 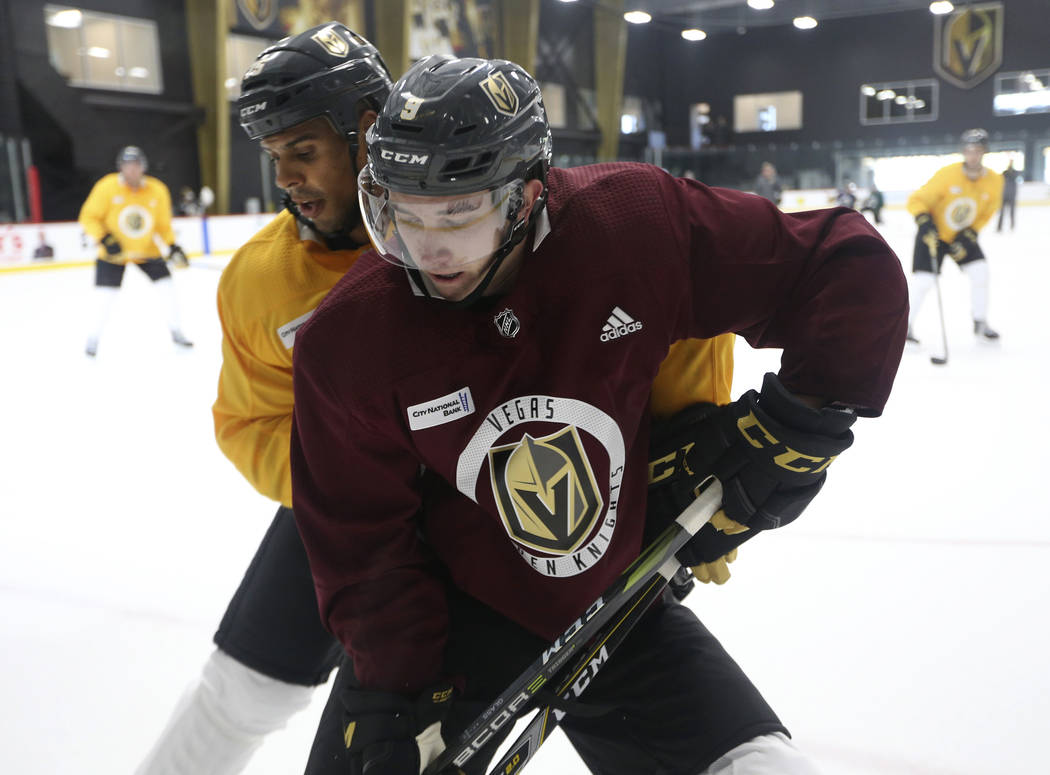 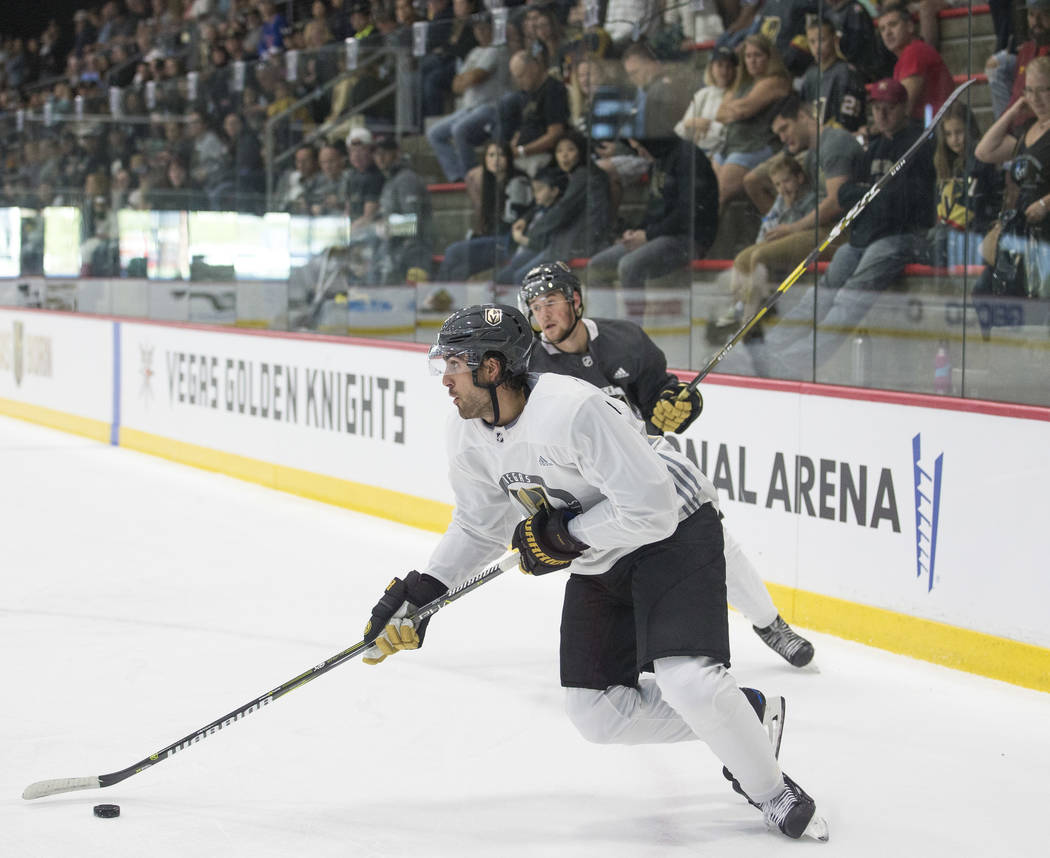 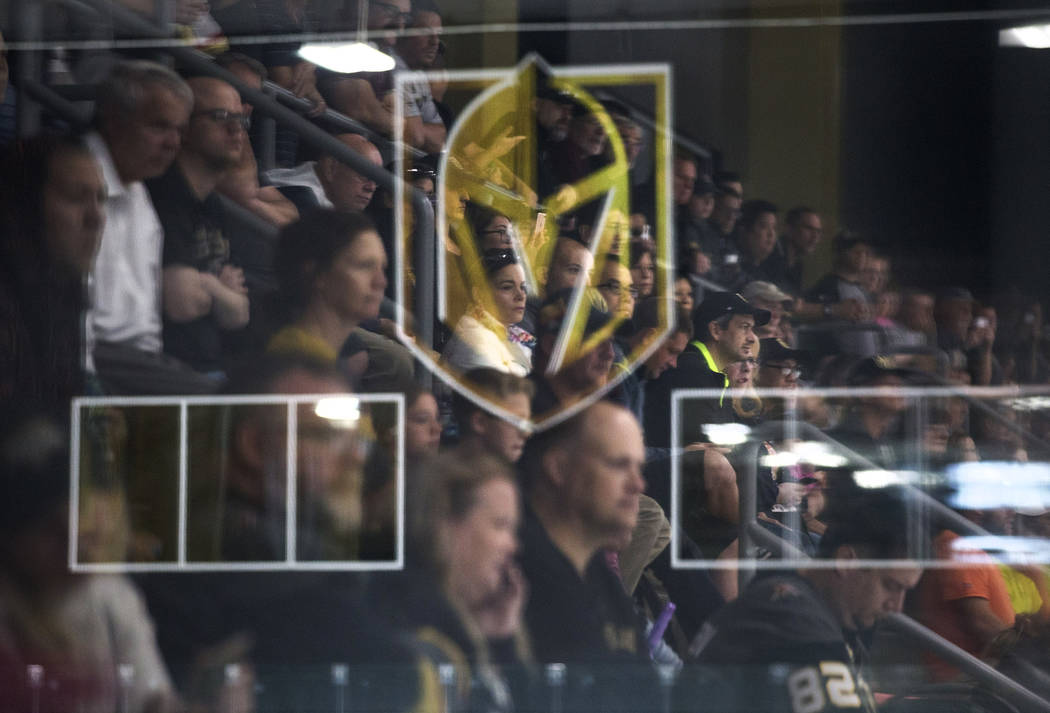 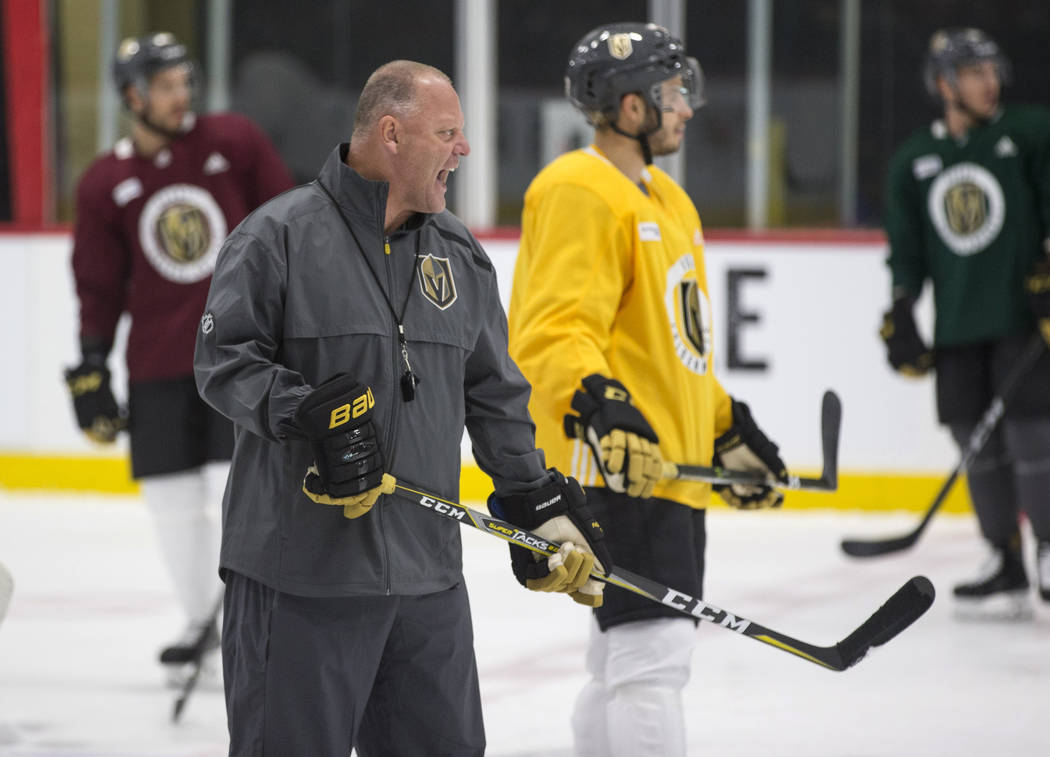 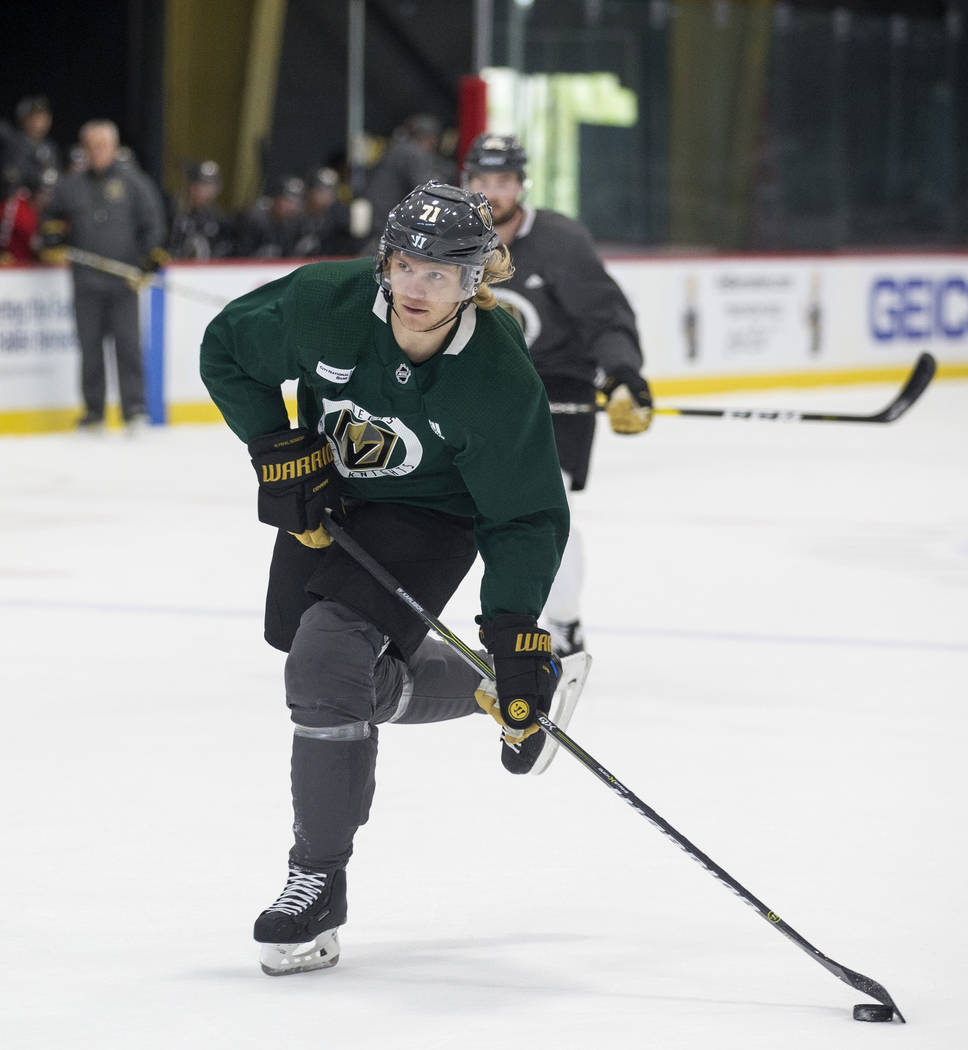 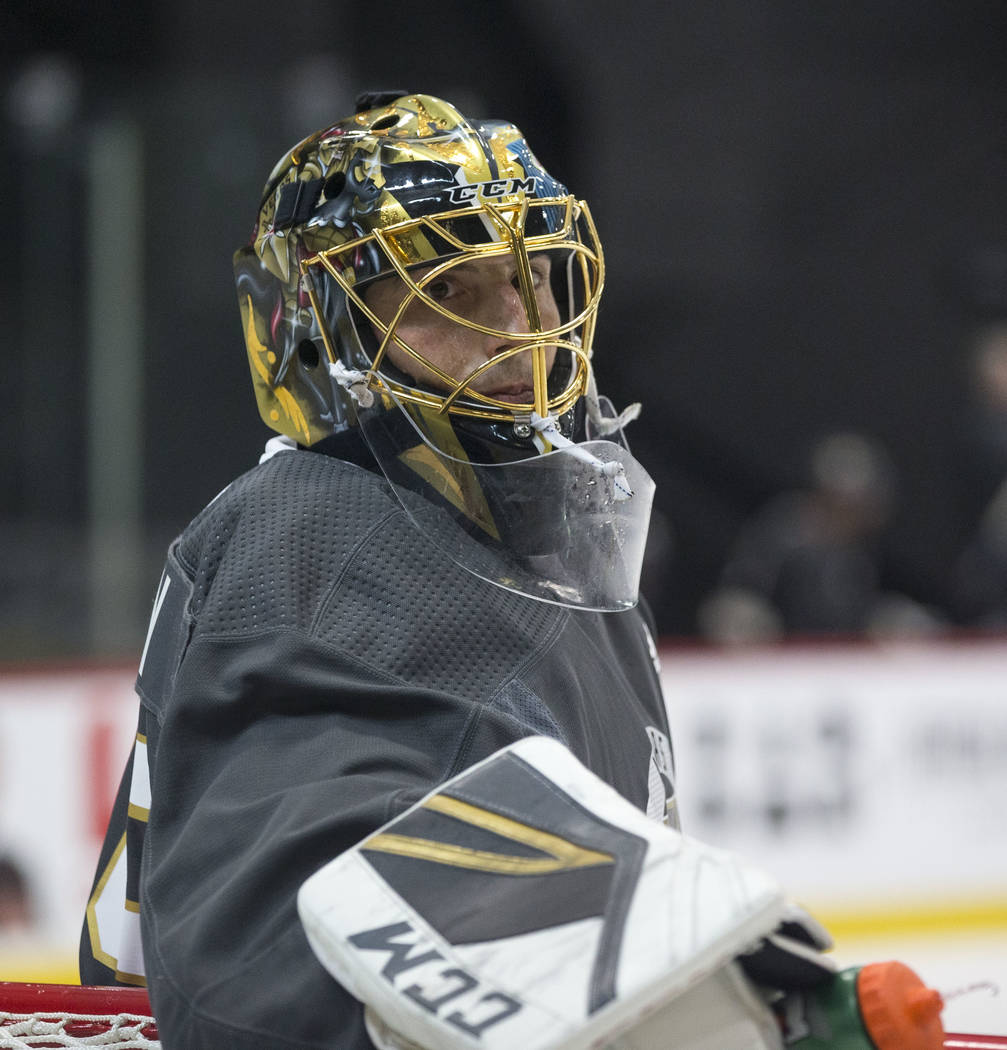 Marc-Andre Fleury upstaged the opening of training camp with a major personal announcement.

The Golden Knights goaltender and his wife, Veronique, are expecting their third child in March.

“Obviously, I’ve known for a little while,” Fleury cracked.

The baby reveal made for a hectic first day back at work for Fleury with thoughts of diapers dancing through his head.

Fleury skated in the last of the three practices Friday at City National Arena, as the Knights began their second season in earnest.

“Your head’s a little bit in between, you know?” he said. “But it’s definitely good to be back. Good to see everybody again and get back out there.”

Fleury enters his 15th year in the NHL with plenty of motivation after the Knights lost to Washington in the Stanley Cup Final three months ago.

Fleury posted career bests in goals-against average (2.24) and save percentage (.927) after being selected in the expansion draft from Pittsburgh.

He signed a three-year, $21 million contract extension that will make him the third-highest paid goalie in the league based on average annual salary when it kicks in next season.

“It would have been pretty silly to let a guy like that go, honestly,” forward Erik Haula said. “I think he enjoys himself here, and we obviously all love him. He’s a top goaltender in the league, if not the best. We’re doing the right things off the ice, and we’re in a good spot with the team.”

Fleury, who turns 34 in November, kept the same routine as the previous two summers, when he won the Stanley Cup with Pittsburgh.

Some rest, and a vacation with his growing family before he started training in Montreal.

Fleury missed 25 games with a concussion last season and will shoulder most of the load in net this season when healthy.

The three-time all-star said he was encouraged by the moves general manager George McPhee made this summer, signing center Paul Stastny and defenseman Nick Holden as free agents.

Fleury also is friends with left wing Max Pacioretty, who was acquired Sunday from Montreal. They trained together in Montreal and now share the same agent.

“It’s good. We lost a big part of our team with (David) Perron and (James) Neal and (Luca) Sbisa, who were good veterans on our team,” Fleury said. “I thought George did a great job finding guys to replace them. We’ve added guys with a lot of character and a lot of experience, also.”

Aside from Fleury’s news and winger Ryan Reaves being gashed in the face by a skate blade during a scrimmage — he’s fine, according to coach Gerard Gallant — it was an uneventful first day.

The 52 skaters and six goaltenders were split into three practice groups, and Gallant gave many of the top prospects a chance to skate with NHL veterans.

Curtis McKenzie practiced in a noncontact jersey, and Gallant said the forward won’t be cleared until next week because of an undisclosed injury.

“The first week, to me, is opportunities for some guys, and after that, you put your team and your lines together and you get ready for the season,” Gallant said. “I told the kids, ‘You know what? You get a chance to play beside a (William) Karlsson or a Max Pacioretty in this training camp, enjoy it.’ ”