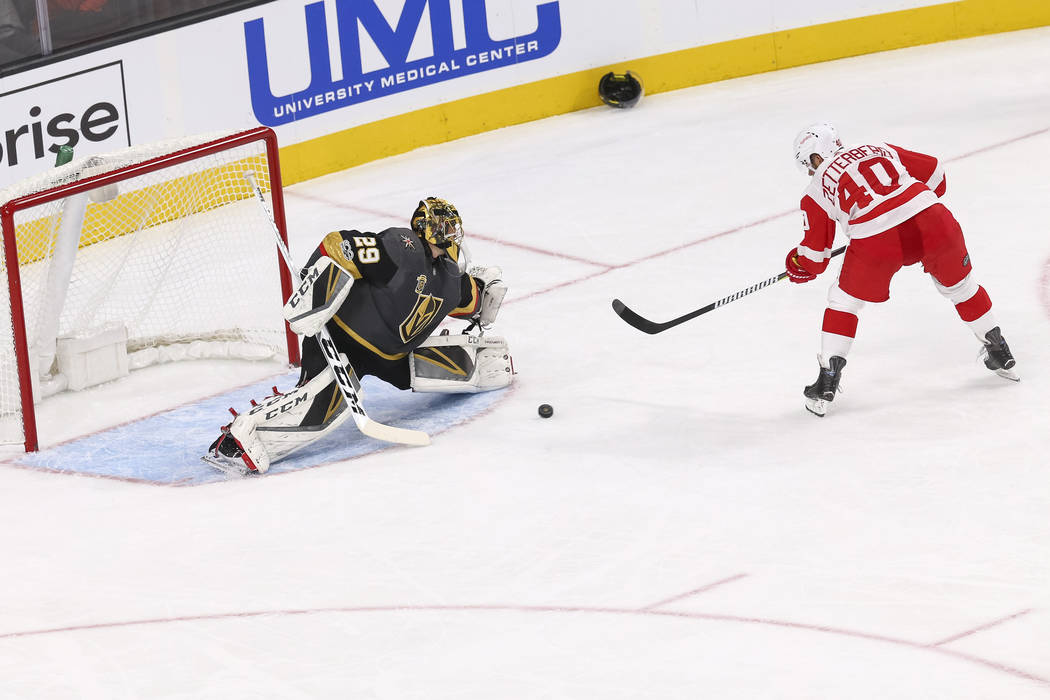 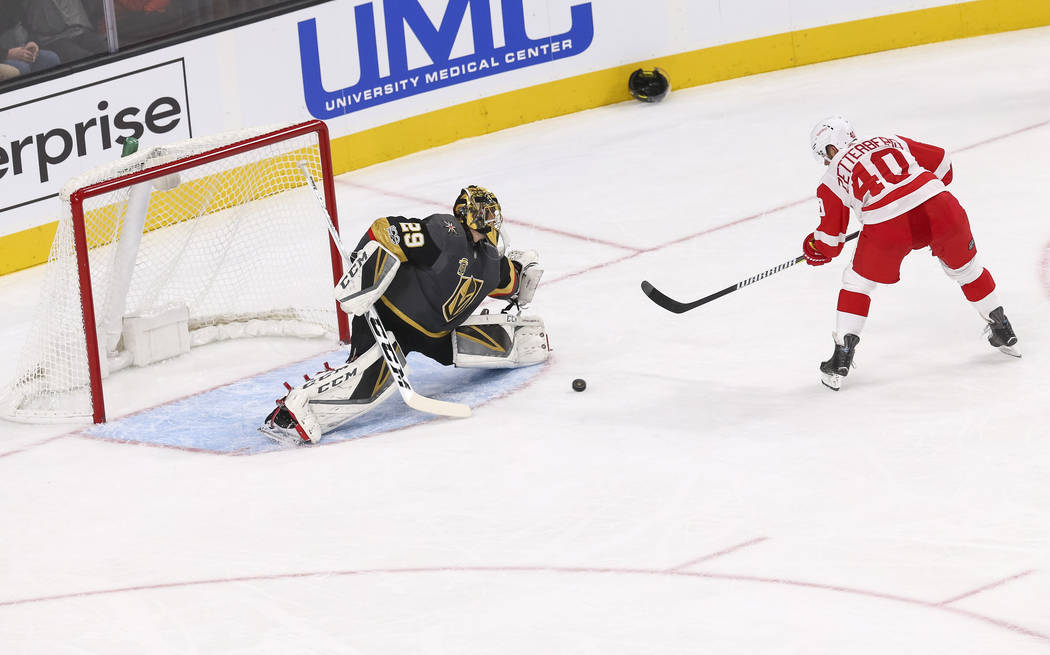 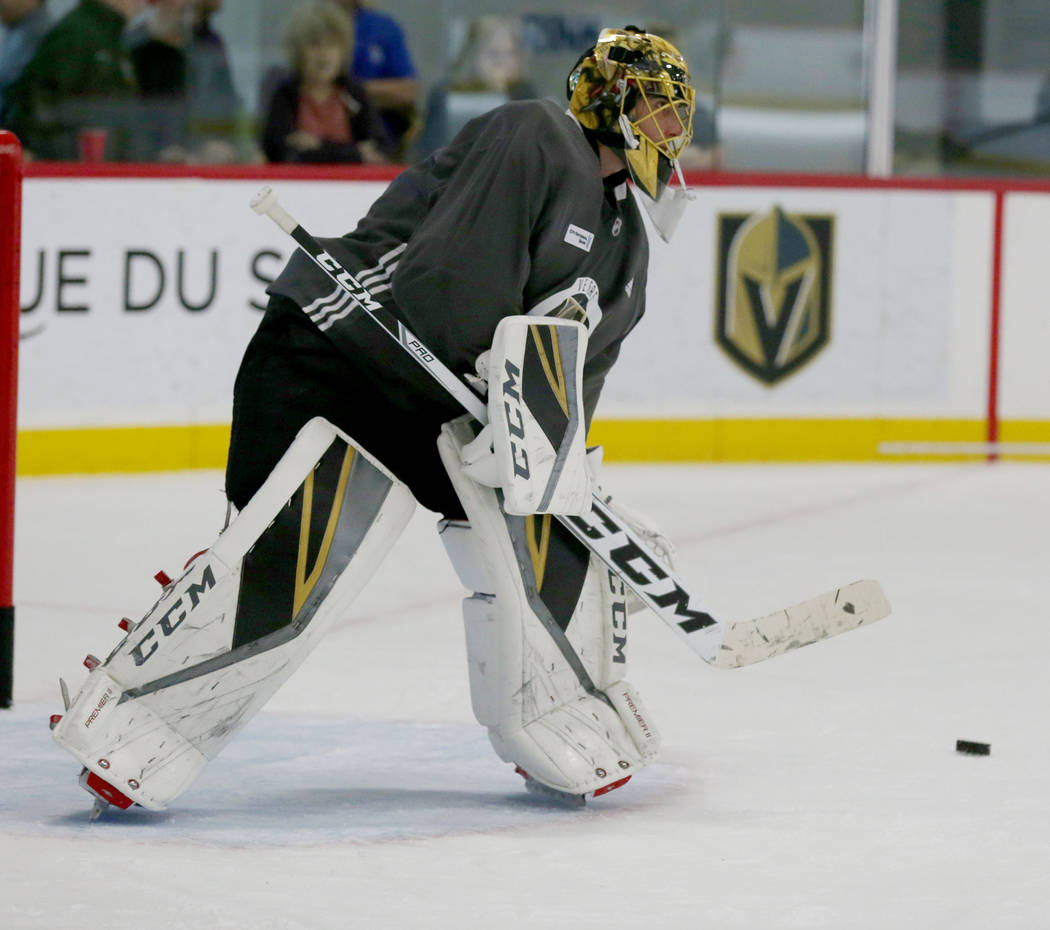 The Golden Knights might have lost more than their first game Friday.

Goaltender Marc-Andre Fleury did not practice Saturday after the 6-3 loss to the Red Wings at T-Mobile Arena. Fleury took a knee to the head in the second period when Detroit’s Anthony Mantha was pushed into him by defenseman Luca Sbisa while en route to the net.

Fleury was woozy but remained in the game. The NHL did not deem the incident severe enough to force Fleury off the ice as part of its concussion protocol.

The goaltender took a maintenance day Saturday, according to coach Gerard Gallant, who added that he was unsure of Fleury’s status for Sunday’s 4 p.m. game against the Boston Bruins at T-Mobile.

“I hope so,” Gallant said when asked if Fleury will play. “Let’s see what happens.”

Fleury’s situation was only the beginning for the Knights. Center Erik Haula, who scored his first goal of the season Friday, was placed on injured reserve with a lower body injury.

Haula reportedly hurt his knee, but the Knights wouldn’t confirm it. He landed awkwardly after being hit in the Detroit zone by Tomas Tatar, and that might be when he was injured. He is expected to miss a week.

Jonathan Marchessault, who also scored his first goal Friday, did not practice Saturday. He also was taking a maintenance day, Gallant said. His status for Sunday is undetermined.

With Haula out and Marchessault’s availability not clear, the Knights recalled Vadim Shipachyov on Saturday. The 30-year-old center from Russia was reassigned to Chicago of the American Hockey League on Oct. 3. He reported to the Wolves but never played or practiced with the team.

Shipachyov returned to Las Vegas and was working out on his own. He is expected to make his debut Sunday, likely playing with William Karlsson and Brendan Leipsic.

Gallant said he wasn’t sure of his lines with Haula out, Shipachyov in and Marchessault a question mark.

“I’m not 100 percent sure where we’ll play him,” Gallant said of Shipachyov.

Shipachyov, who does not speak English and uses an interpreter to communicate, was not made available to the media Saturday.

Gallant said it was important to forget Friday’s loss.

“We talked about some of the mistakes we made last night,” he said. “You’ve got to move forward and do the positive things we’ve been doing.

“The guys were in good spirits. There’s no need for me to be barking at them. We’re focusing on Sunday.”

Fleury is clearly the biggest concern. If he can’t play, Malcolm Subban, who joined the Knights on Oct. 3 after the team moved Calvin Pickard, probably would get his first start. It would come against his former team, as the Bruins placed Subban on waivers and the Knights claimed him.

“Obviously you need to be ready to go ,” Subban said. “I’ve been working hard on my game, and I’m trying to show that I can play in the NHL, so that’s what I’m trying to aim for.”