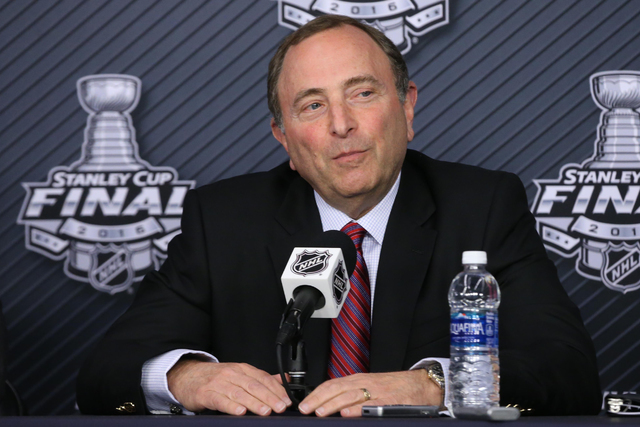 NHL commissioner Gary Bettman speaks to the media before Game 1 of the Stanley Cup final series between the San Jose Sharks and the Pittsburgh Penguins Monday, May 30, 2016. (Charles LeClaire/USA Today Sports) 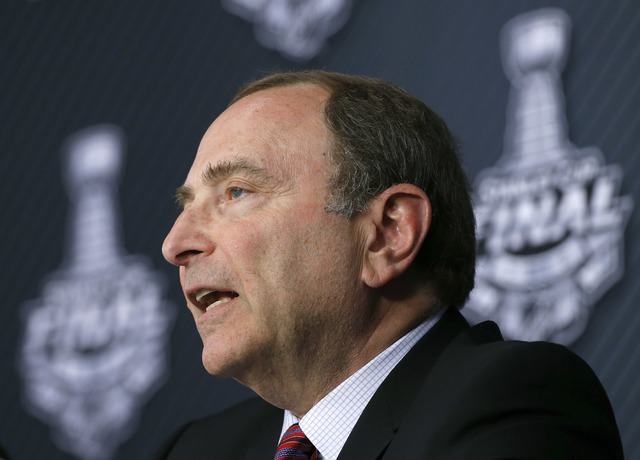 NHL Commissioner Gary Bettman speaks to the media before Game 1 of the Stanley Cup final series between the San Jose Sharks and the Pittsburgh Penguins Monday, May 30, 2016, in Pittsburgh. (Gene J. Puskar/AP) 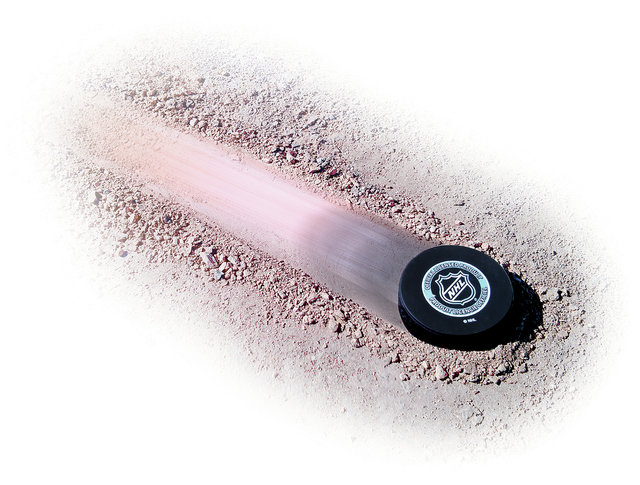 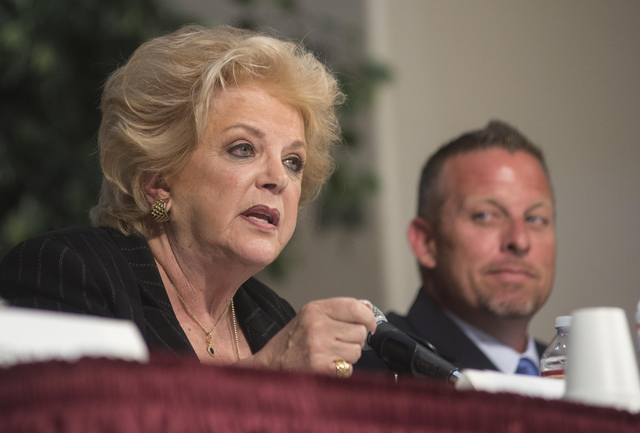 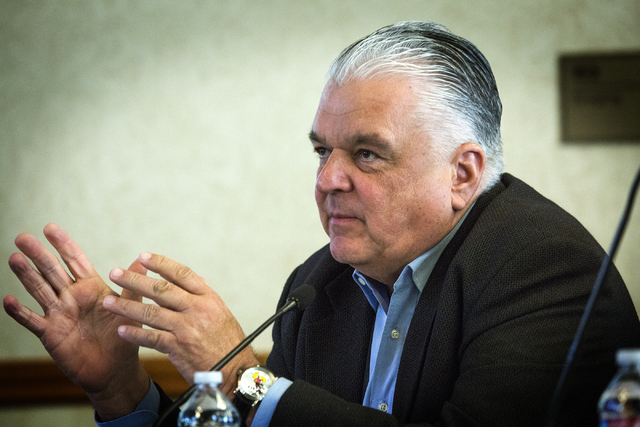 Three independent sources confirmed to the Review-Journal on Tuesday that the NHL’s executive committee has recommended the league expand to Las Vegas when the Board of Governors meets at Encore on June 22.

A two-thirds vote from the NHL’s 30 owners is required for approval. Next week’s vote is the final hurdle in the long process that began in late 2014 when billionaire businessman Bill Foley declared his interest in bringing a franchise to Las Vegas.

All sources spoke under the condition of anonymity because they were not authorized to reveal the committee’s recommendation.

Foley told the Review-Journal in a text message that he couldn’t comment. NHL spokesman Frank Brown said the league had no comment.

Foley would pay a $500 million expansion fee for the NHL’s 31st team. The Las Vegas team would begin play in 2017-18 at T-Mobile Arena. More than 14,000 deposits have been put down on season tickets since Foley launched a sales drive in February 2015.

Las Vegas has been home to minor league teams (the Stars/51s in baseball and the Thunder and Wranglers in hockey) and several also-ran or fringe professional teams (Outlaws in the XFL, Posse in the CFL and the Sting, Gladiators and Outlaws in the Arena Football League). But gambling, a lack of suitable facilities and doubts about the region’s ability to support a major pro franchise have kept the city out of the big leagues.

Las Vegas has been a potential home for major league teams for years. It was in the running for baseball’s Expos, which moved from Montreal to Washington and became the Nationals. Rumors of the Sacramento Kings and the Milwaukee Bucks relocating here died as the city became leverage for new NBA arenas. Just a few years ago, rumblings that movie and TV producer Jerry Bruckheimer would bring an NHL team to Southern Nevada died on the vine.

However, the Las Vegas sports climate has changed drastically in recent years. The valley’s economy has rebounded from the Great Recession, and its population has grown past 2 million. Legal, regulated sports betting, which leagues once considered a threat to the integrity of athletic events, has been legitimized by sports officials such as NBA Commissioner Adam Silver. The Oakland Raiders are considering relocation to Las Vegas if a 65,000-seat domed stadium is built near the Strip. And the NCAA has considered lifting its ban on championship events being staged in the city.

The construction of T-Mobile Arena, a state-of-the-art Strip facility designed to accommodate hockey and basketball, made the market all the more attractive to the NHL. Las Vegas already is bigger than five NHL markets.

While the news appears to be good for Las Vegas, the same can’t be said for Quebec City. That city also applied for an expansion team in July 2015 but has faced resistance from league owners, primarily because of the instability of the Canadian dollar. It appears the Quebec City bid will be put on hold.

If the owners vote to approve the committee’s recommendation, it will mark the league’s first expansion since 2000, when Columbus and Minnesota joined the league for $80 million apiece.

Foley is keeping silent, but local politicians were ecstatic about the news.

“We’ve grown up,” Las Vegas Mayor Carolyn Goodman said. “It’s an exciting step for us, but I’m waiting for the Board of Governors to approve it before I start to really celebrate.

“Hats off to Bill Foley for having the vision to pull it off and to do it the right way by putting the pieces together in the right order.”

Clark County Commission Chairman Steve Sisolak, who was the first to place a deposit on season tickets, said in a statement: “H-E double-hockey-sticks yes! I’m excited but I’m waiting for the official announcement from the NHL. Las Vegas has been waiting for this for decades. We’re a major league city. We deserve major league sports. I can’t wait to see that first championship parade down the Las Vegas Strip!”

The Las Vegas journey began in the fall of 2014 when the Maloof brothers, Joe and Gavin, met with NHL commissioner Gary Bettman about purchasing an NHL team. The Maloofs had owned two NBA teams, the Sacramento Kings and the Houston Rockets, and they knew Bettman when the family owned the Rockets and he worked for the NBA.

Bettman had also spoken to Foley, and Bettman suggested to the Maloofs that they contact Foley about forming a partnership. The two parties met in December and agreed to work together. They formed a group of local businessmen and political leaders called the “Founding 50” to help drum up interest and also sell 100 season tickets each. That Founding 50 quickly grew to 75, then 90.

In February 2015 at the MGM Grand, with Bettman in attendance, Foley launched his season ticket drive for a team that did not exist to play in an arena that was still under construction.

More than 5,000 deposits were received that day, and the number grew over the coming months to its current 14,000. A few people canceled, but the vast majority stayed in. All of T-Mobile Arena’s 44 suites sold out.

On July 20, Foley put down a $2 million deposit and submitted his application to the NHL. He then went through a vetting process that covered everything from his education to his businesses to his lease. He appeared before the league’s executive committee Sept. 29 in New York and spent about an hour answering questions from the nine-member panel.

Foley was careful with his public comments to avoid antagonizing Bettman, whom he considered an ally, and preserve his good standing with the owners.

When the executive committee met June 7 in New York to decide whether or not to recommend expansion, Foley was not there. He said he remained optimistic that his quest would have a successful conclusion. He also said he has stayed in touch with Bettman through the process and had been kept abreast of any developments.

Meanwhile, season tickets continue to be sold on the proposed team’s website, vegaswantshockey.com. Foley and Las Vegas need a little more patience — a week’s worth — before they can celebrate a historic day for the city and the state.