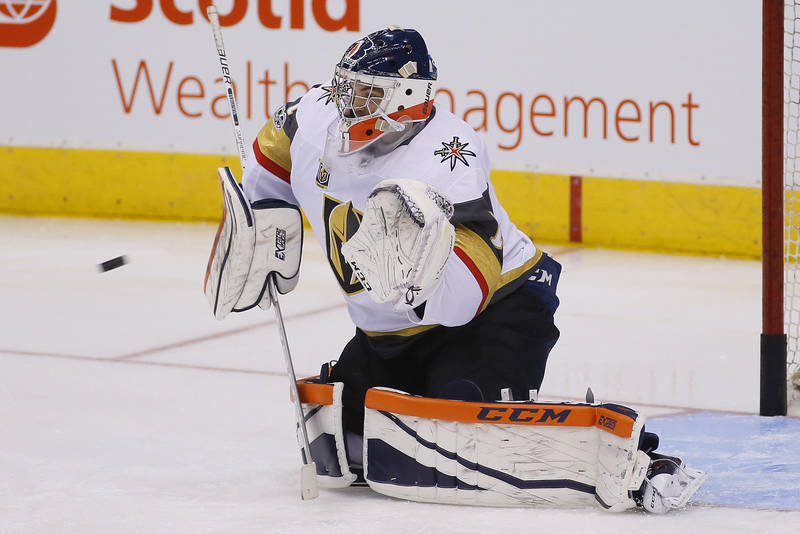 “It’s still really surreal,” Ferguson said Wednesday after the team’s practice at Rogers Arena. “It’s kind of starting to sink in a little bit, but I don’t think it’s ever going to sink in. I’m going to remember this for the rest of my life.”

Ferguson played the final 9:14 of the Knights’ 8-2 loss and stopped one of the two shots he faced.

Oilers star Connor McDavid also had a goal disallowed for goaltender interference, and the two had a friendly chat at one point, with the Oilers’ star telling Ferguson, “Good job.”

“I think that’s what he said. I was kind of star-struck a little bit to tell you the truth,” Ferguson said. “It was crazy. Just being here, I’m so grateful for this opportunity.”

Ferguson was called up on an emergency basis Oct. 31 and will return to his major junior team (Kamloops of the Western Hockey League) when the Knights’ regular goaltenders come off the injured-reserve list.

Ferguson was born in Vancouver and grew up in nearby Lantzville, British Columbia. He is expected to have several family and friends at Thursday’s game against the Canucks.

“When I head back, it’s just going to be more motivation to work that 10 percent harder to get back here,” Ferguson said. “I know what the NHL feels like now. It’s a great experience; not too many kids in my league have that.”

The Knights are 2-3 following a loss, which includes one-goal setbacks in Boston and Montreal. But this is the first time they’ve come off a blowout.

As a result, coach Gerard Gallant is eager to see how his team is able to put Tuesday’s loss at Edmonton in the rearview mirror.

David Perron recorded an assist on James Neal’s goal Tuesday and now has an assist in five straight games. He leads the Knights in scoring with five goals and 10 assists for 15 points.

Erik Haula saw his streak of four straight games with at least one point come to an end against the Oilers.

The Knights will host its Hockey Fight Cancer Night on Nov. 28 when they host the Dallas Stars at T-Mobile Arena.

The team will wear special lavender jerseys during warmups that will be auctioned. All proceeds, along with money raised from the 51/49 raffle, will benefit the health and wellness portion of the Vegas Golden Knights Foundation and the Nevada Childhood Cancer Foundation.