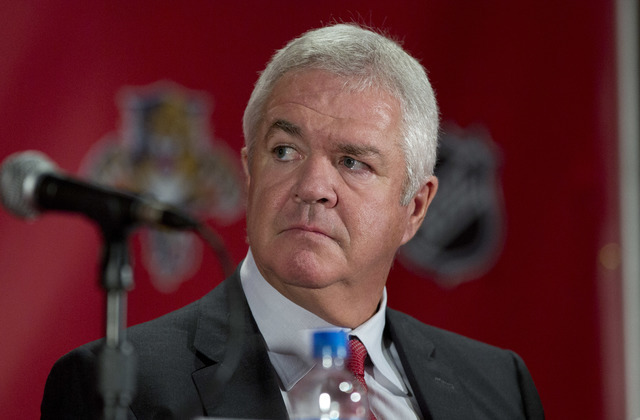 In this Sept. 27, 2013, file photo, Dale Tallon, the Florida Panthers' executive vice president and general manager, listens during an NHL hockey press conference in Sunrise, Fla. Tallon agrreed to a three-year extension to remain as general manager of the Panthers, a long-struggling team that opens 2016 in first place. (J Pat Carter, File/AP)

Can Bill Foley’s hockey team be competitive in its inaugural NHL season?

The launch is still a year away. But for the league’s 30 general managers, the news that the NHL is expanding to Las Vegas for 2017-18 has the smart ones already planning.

Under the NHL’s expansion rules, teams will have the option of protecting one goaltender, three defensemen and seven forwards. Or they can protect one goalie and eight skaters, four of whom can be defensemen. First- and second-year professionals are exempt, and players with no-trade clauses can’t be exposed. Teams will lose a maximum of one player.

So which way does an NHL general manager go? It depends on the makeup of his roster. If he has a strong defense corps, perhaps option No. 2 is best. If he has balanced scorers, he’s likely to go with the first option.

But the reality is, every team is going to lose a good player to Las Vegas in a year in the expansion draft. That player will depend on whom is calling the shots for the Las Vegas team.

“Given the (expansion draft) rules, Las Vegas will be able to put a good team on the ice,” Florida Panthers president Dale Tallon said. “It’s been a long time since we expanded, and the way the game is played now and the way it’s coached, there’s a lot of great athletes out there.

“Obviously, you have to put the right pieces together. But certainly the opportunity is going to be there for Vegas to be competitive right away.”

Craig Button, the former Calgary Flames general manager who now is an analyst for TSN in Canada, said the talent will be there for Las Vegas to be competitive.

“Will they be Stanley Cup competitive the first year? No,” Button said. “But with the pool of players they’ll have to choose from, Las Vegas has the chance to have solid footing coming out of the gate.”

The belief around the NHL is there is going to be a trading frenzy leading up to the Entry Draft on June 24. Teams will try to unload players who might be exposed in the expansion draft and regain some assets.

It began Wednesday with Chicago and Carolina, with the Blackhawks trading forwards Bryan Bickell and Teuvo Teravainen to the Hurricanes for a No. 2 pick in next week’s draft and a No. 3 in 2017. The Blackhawks cleared salary cap space by unloading Bickell and his $4 million annual salary.

The other factor is the salary cap. The cap for the recently concluded season was $71.4 million, and it figures to be in the $71 million to $73 million range for 2017-18. For some teams, it might mean that making a deal could be difficult if the club is weighed down by lengthy contracts that can’t be unloaded.

“There’s going to be a lot of maneuvering, because in the end, the GM has to make sure that his team has the guys they want to protect and be able to absorb the loss of the one player they’re ultimately going to lose,” Button said.

Added Tallon: “I think it depends on our goalie and your depth chart on which way you go. But the reality is you’re only losing one player per team. If you have a lot of assets, losing one player isn’t going to be a big challenge.”

Button said the real pressure will be on the Las Vegas general manager to make the right decision on whom to claim off the expansion list.

“Every move that is made from now until the expansion draft is going to have an impact on Las Vegas one way or the other,” Button said. “Whoever Las Vegas chooses to run their hockey operations will have lots of options.

“But you only get one chance to get it right, and he better know that there’s 30 teams that will be working against him and don’t want Las Vegas to succeed.”