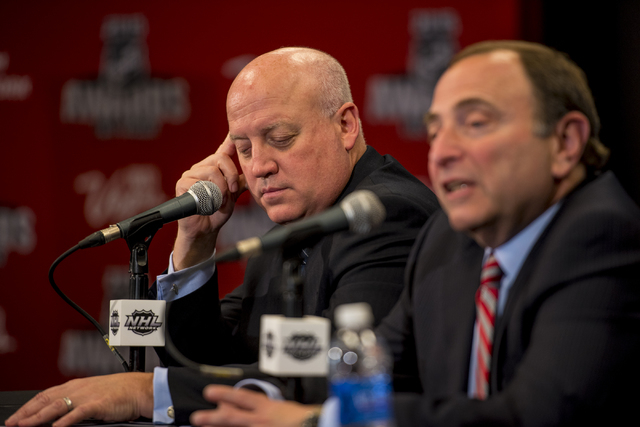 In anticipation of being granted an NHL franchise to begin play in 2017-18, prospective owner Bill Foley already has a list of names he wants to pursue to be his team’s president and general manager.

Whoever that person is will have a much clearer picture of what the parameters will be for an expansion draft a year from now and how best to build a first-year roster.

The Globe and Mail and sportsnet.ca both reported Friday that the league has sent new details on stocking an expansion team to its current 30 teams to give the GMs a heads-up on how to craft their rosters for a year from now.

The news heightens speculation that the NHL is going to approve expansion when the Board of Governors meet at Encore on June 22. The nine-member executive committee met Tuesday in New York but did not reveal its recommendations for expansion.

The items that are reportedly part of the expansion draft include:

* A rule that at least one defenseman and two forwards who have played 40 games in a season or 70 games over two seasons must be left unprotected and must be under contract for the 2017-18 season.

* And as had been announced earlier, first- and second-year professionals would be exempt from the expansion draft.

As for the expansion team, it would participate in the weighted lottery for the 2017 NHL Entry Draft and would have the same weight as the team that finishes third from last. The expansion team would pick no worse than sixth but could conceivably get the No. 1 overall pick if the lottery fell its way.

Also, the expansion team must select players that have a total value of between 60 and 100 percent of the 2016-17 salary cap and it cannot buy out any player it selects in the expansion draft until after the 2017-18 season. The 2016-17 cap is expected to be between $70 million and $72 million depending on projected revenues.

Each of the 30 teams will lose a maximum of one player. Teams can protect one goaltender, three defenseman and seven forwards as previously announced by the league. There is also the option allowing teams to protect eight skaters and one goaltender.

Deputy commissioner Bill Daly has said teams that fail to comply with the expansion rules would be subject to fines and possibly loss of draft picks.