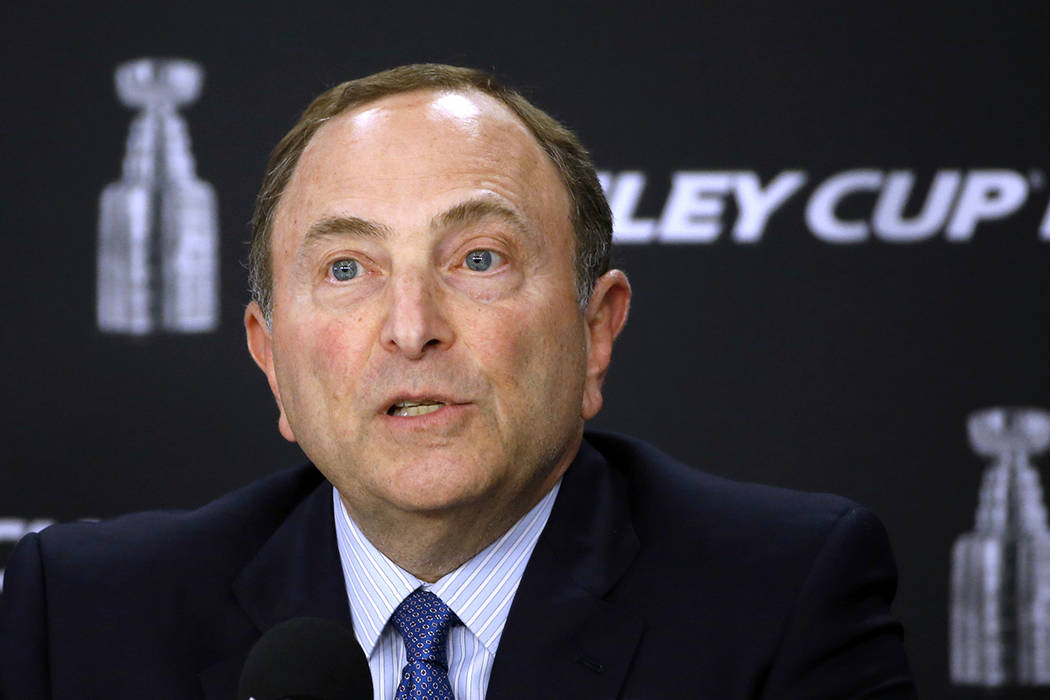 NHL Commissioner Gary Bettman speaks to the media before Game 1 of the NHL hockey Stanley Cup Finals between the Pittsburgh Penguins and the Nashville Predators, Monday, May 29, 2017, in Pittsburgh. (AP Photo/Gene J. Puskar)

The free-agent clock was changed in favor of the Golden Knights on Monday.

The NHL announced it had reached agreement with its Players Association and will extend the time period the Knights have to pursue free agents prior to the June 21 expansion draft.

“We are very pleased that (NHL commissioner) Gary Bettman and (deputy commissioner) Bill Daly granted our request for an additional 24 hours,” McPhee said Monday night from Buffalo, where he is attending the NHL draft combine.“The process will be much more manageable as a result.”

Daly, who was with Bettman at the commissioner’s state of the league news conference at PPG Paints Arena in Pittsburgh prior to Game 1 of the Stanley Cup Final, said everything appears in place to conduct the expansion draft.

“There’s questions from time to time from the Las Vegas franchise, the other (NHL) teams and the Players Association, but we’re working through them and I think we’re pretty much done,” Daly said.

Bettman also announced Monday that the NHL All-Star weekend will be in Tampa, Florida, Jan. 27-28, thus ending speculation about whether the league would reconsider its position and participate in the 2018 Winter Olympics in South Korea.

“It’s simple, the owners had no appetite to participate (in the Olympics),” Bettman said.

The NHL also will play two preseason games in China involving the Los Angeles Kings and Vancouver Canucks, Sept. 21 in Shanghai and Sept. 23 in Beijing, site of the 2022 Winter Games, Bettman said.

And the league confirmed the report of Washington playing Toronto outdoors March 3 at the United States Naval Academy in Annapolis, Maryland. The Jan. 1 Winter Classic has the New York Rangers at home facing Buffalo at Citi Field in Queens.

Bettman said the plan is to have future outdoor games at the other military academies — West Point and the Air Force Academy — which could open the door for the Golden Knights. Owner Bill Foley, a West Point graduate, said the Knights are interested in playing an outdoor game, but no invitation has been extended.

The entire 2017-18 schedule — preseason and regular season — will be released during the weekend of the NHL entry draft, June 23-24. Bettman also confirmed that the unveiling of the team jerseys by Adidas, including the Golden Knights, will be June 20 in Las Vegas.

The league said it was pleased with the quality of the staff McPhee has put together and were confident the Knights will be representative in their inaugural season.

“I think the Las Vegas franchise, in terms of building an organization, had done a fantastic job,” Daly said. “I think they’re very pleased with the response from the marketplace and are very, very excited to get under way from a hockey perspective.”

The Knights may also have a little more money to spend. Daly said the salary cap for the upcoming 2017-18 season is projected to be somewhere between $73 million and $77 million, depending whether the Players Association exercises the 5 percent inflator in the collective bargaining agreement.