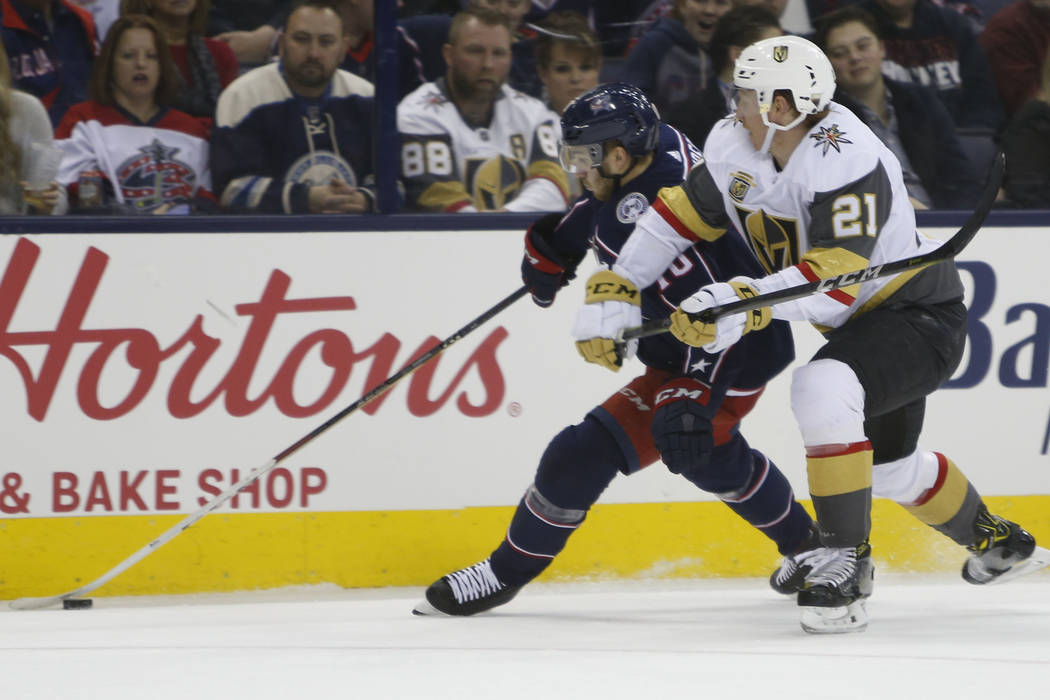 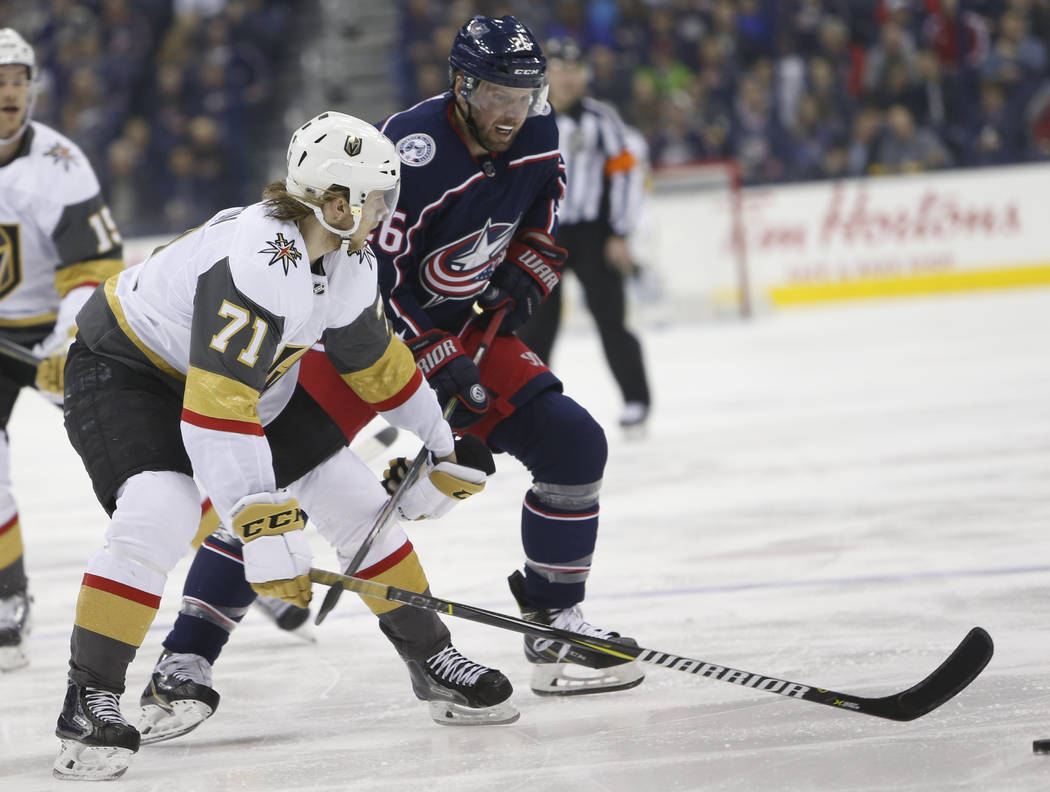 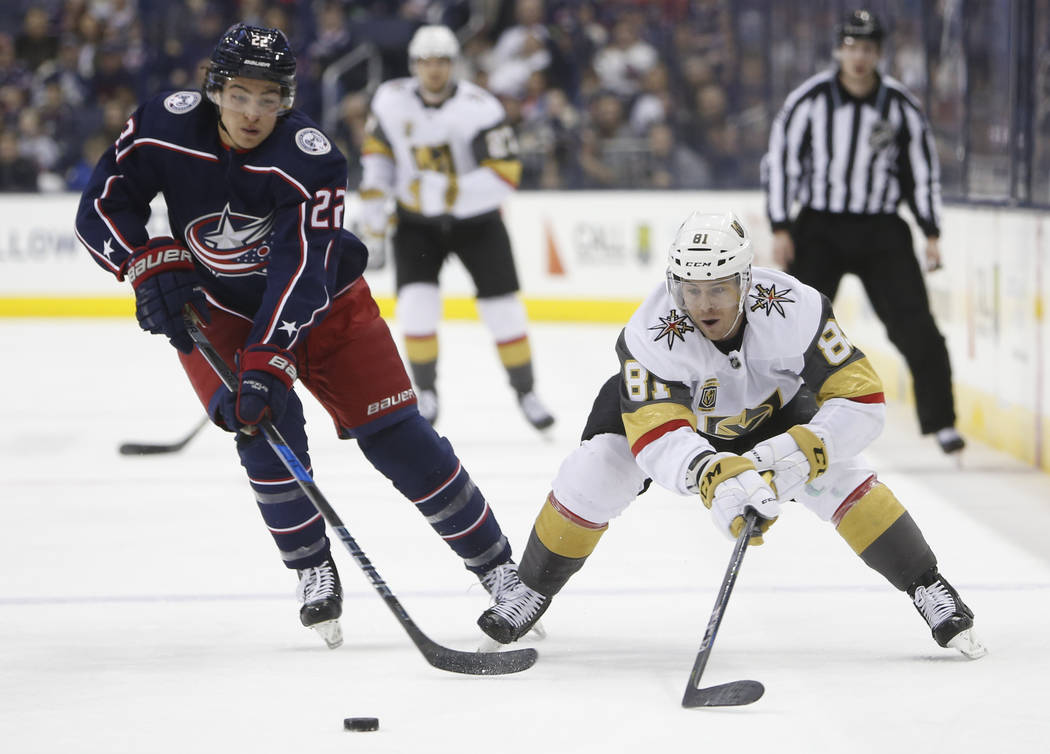 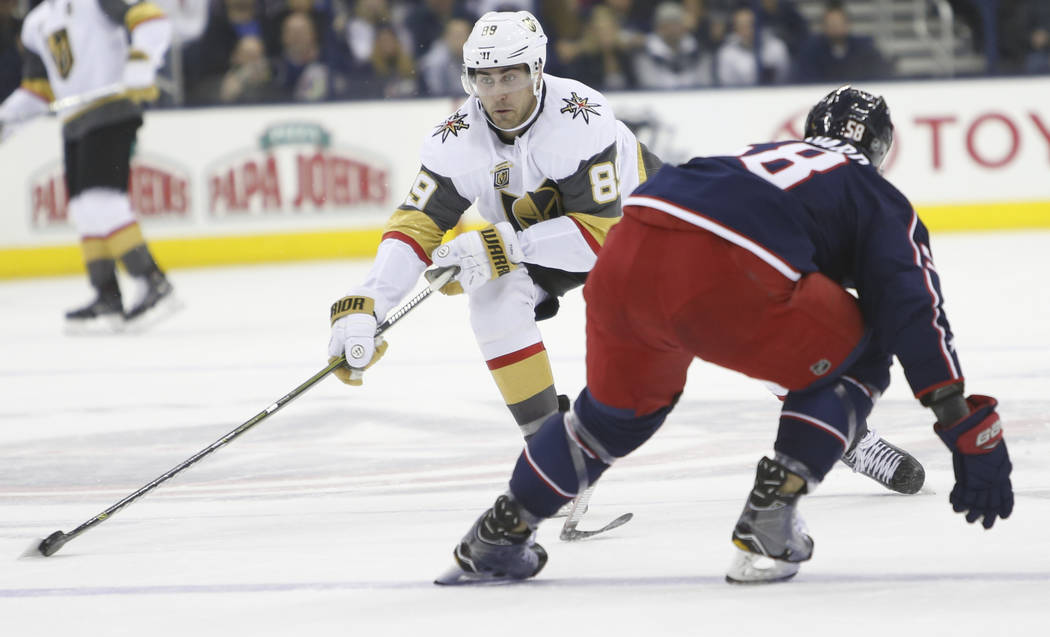 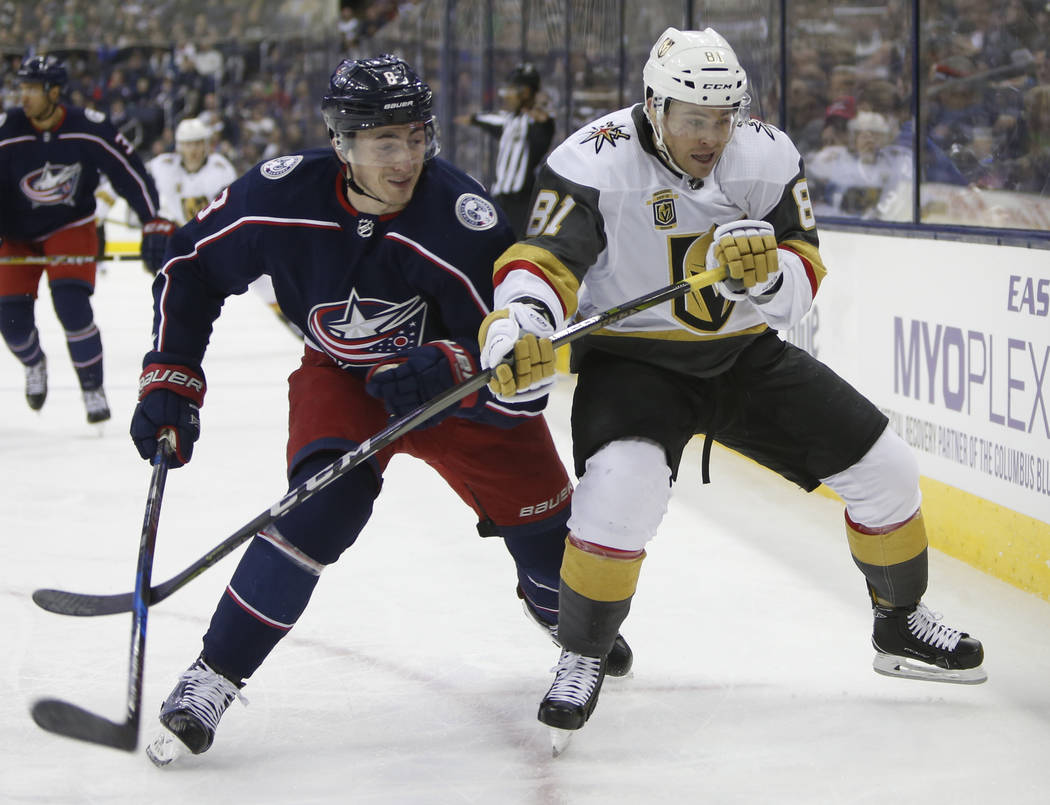 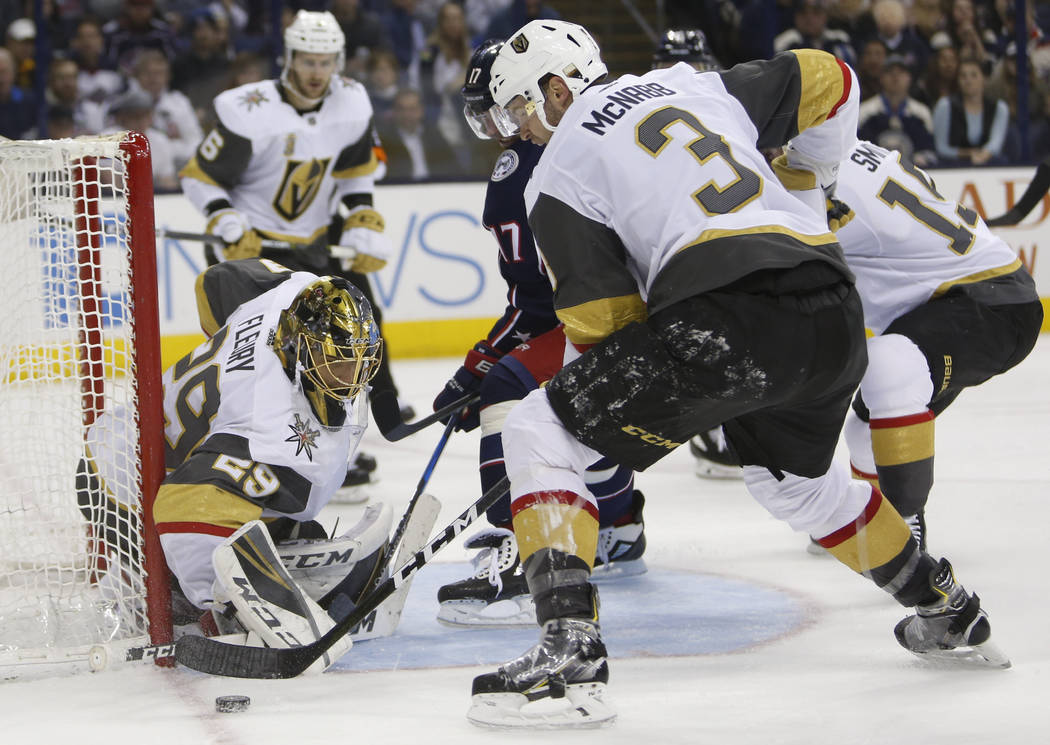 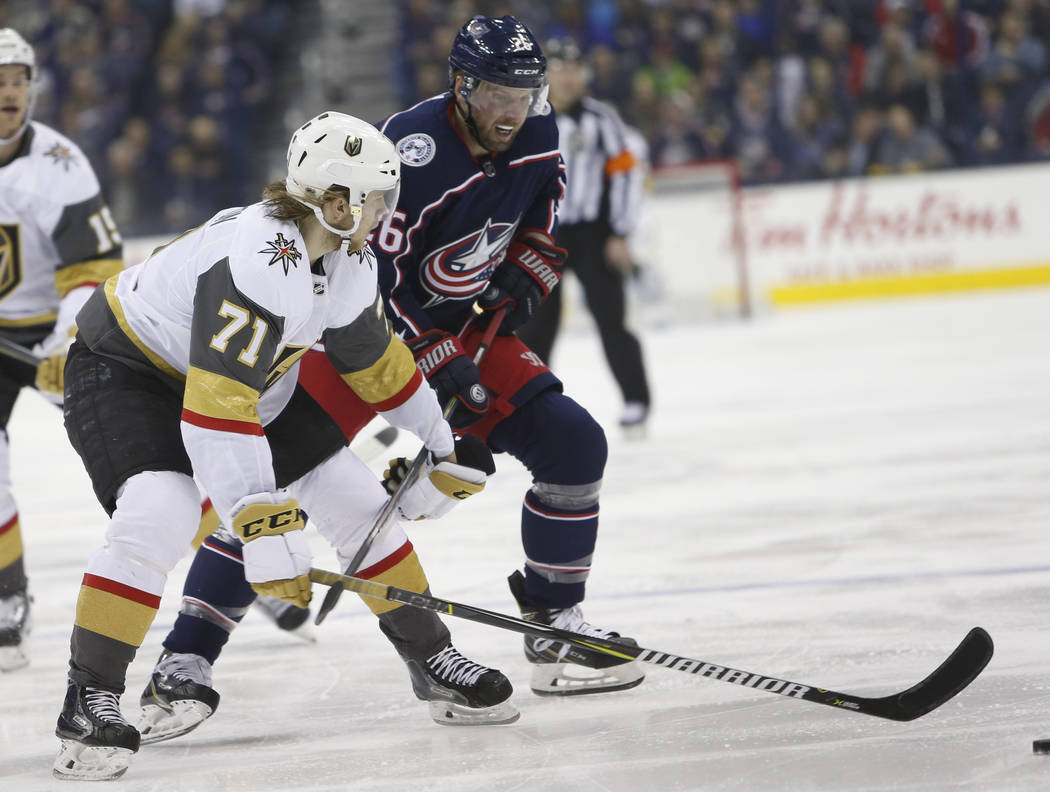 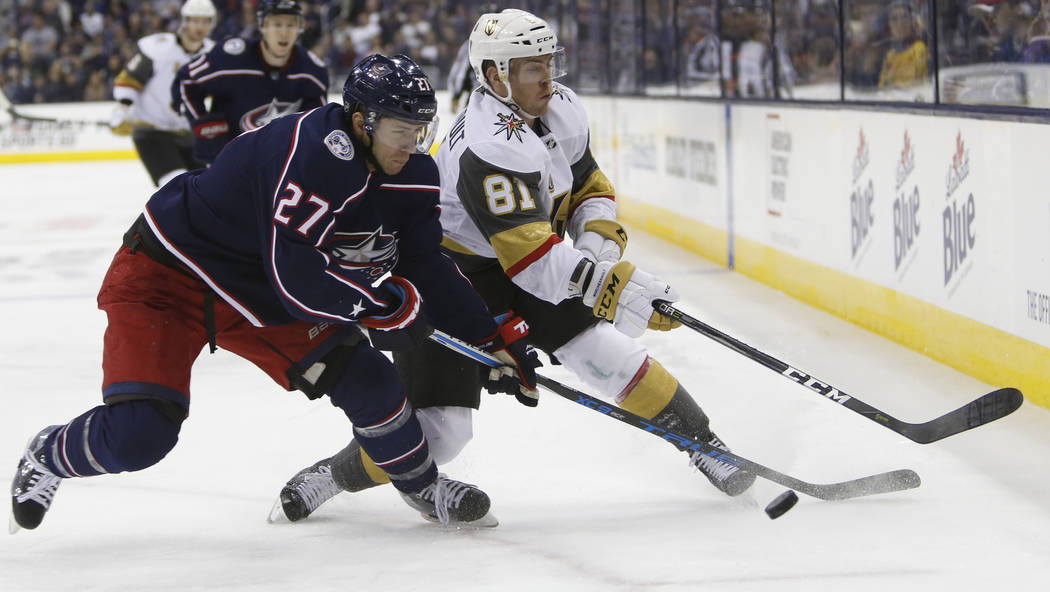 COLUMBUS, Ohio — Losing games is one thing. But the loss of key players continues to take a heavy toll on the Golden Knights.

The Knights got center Pierre-Edouard Bellemare back in the lineup Tuesday against Columbus, but they may have lost Reilly Smith after Smith took a hit in the final minute of the second period and left the ice holding his left side. He did not return for the third period as the Blue Jackets knocked off the Knights 4-1 at Nationwide Arena.

“I don’t have an update for you,” Knights coach Gerard Gallant said on the condition of Smith, who is tied for second on the team in scoring with David Perron with 60 points. “Obviously Reilly is one of our top players and he always plays a good game. I thought the team played well without him in the third period, but he’s a big loss to that line for sure.”

Erik Haula, who scored the lone Knights goal to tie the game 1-1 early in the second period, said there’s no question the team’s depth has been tested.

In addition to Smith, the Knights are without forwards James Neal, Oscar Lindberg and Will Carrier, along with defensemen Nate Schmidt and Luca Sbisa and backup goaltender Malcolm Subban.

“We’re missing guys, but that’s no excuse for anything,” said Haula, whose goal was his 24th of the year. “We had (Smith) for the first two periods. We have a deep team. We’ve been saying that all year. Now it’s time to prove that.”

The Blue Jackets quickly grabbed a 1-0 lead when Artemi Panarin scored just 16 seconds into the game, the fastest goal surrendered in the Knights’ brief history.

“We got better and better as the game went on,” Perron said, “but we just couldn’t get that second goal. We had a lot of good chances, and we usually put those away.”

The Knights did catch a break in the first period as video coach Tommy Cruz told Gallant to challenge Pierre-Luc Dubois’ goal at the 6:14 mark after Cruz believed Cam Atkinson was offsides. The video review showed Atkinson did not have control of the puck when he crossed the blue line and the goal was disallowed. Dubois would get one late when he scored an empty-net goal with 2:21 remaining for the final Columbus goal.

The Blue Jackets broke the 1-1 tie with a pair of goals in a 1:46 span during the second period as defensemen Zach Werenski and Ian Cole both beat Marc-Andre Fleury to make it 3-1. At the other end, Joonas Korpisalo turned aside 37 of the 38 shots he faced filling in for the ill Sergei Bobrovsky.

“He was solid right from the get-go,” Blue Jackets coach John Tortorella said of Korpisalo, who won a game in regulation for the first time since Dec. 20. “We’ve been playing close games all year. When we got the lead, we were on our toes and we played with more confidence.”

The Knights (42-19-5), who are 1-1 on the five-game road trip, are off Wednesday before meeting the Red Wings on Thursday in Detroit. Haula said it’s up to the players to regain a level of consistency which has been a big part of their success in their inaugural NHL season.

“We’ve got to be better overall,” Haula said. “We’re not hard enough right now. This is the hardest time of the year, going into March. It’s the last stretch. People are fighting to get the last (playoff) spots. I feel we have another level we need to get to down the stretch and finish this road trip.”