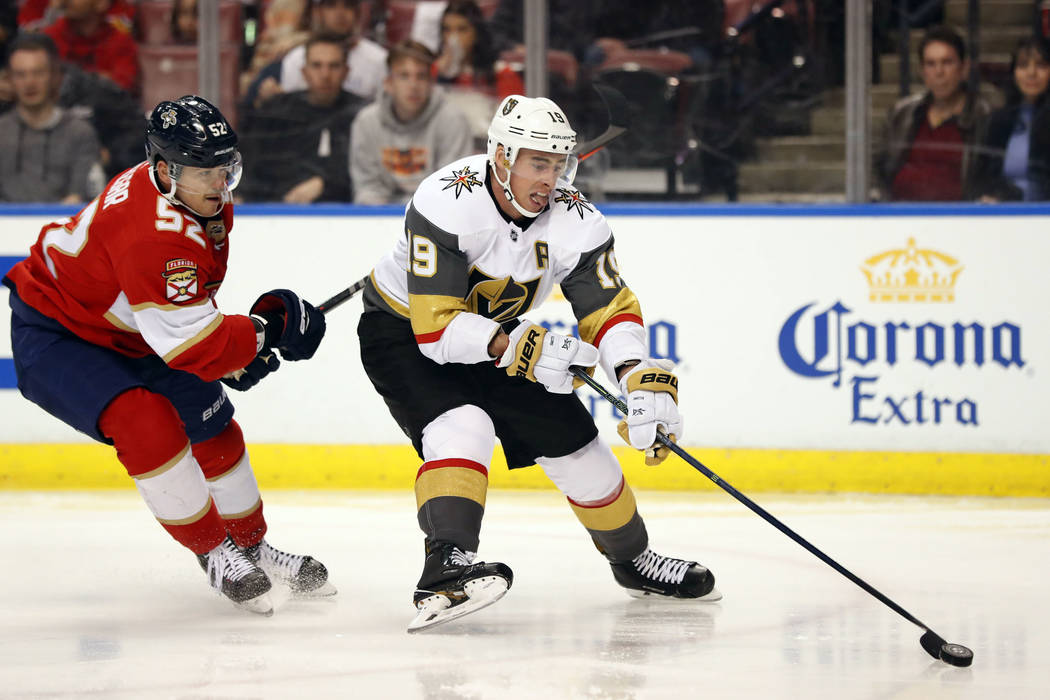 TAMPA, Fla. — One of the issues for the Golden Knights during their current losing skid has been their play in the second period.

In truth, it’s been a season-long problem.

The Knights have a minus-6 goal differential in the middle period, and while it didn’t cost them in Saturday’s 3-1 loss at Florida on Saturday, it’s an area that must improve.

“A hockey game is 60 minutes. There’s no excuse to play only 40, especially for us,” left wing Jonathan Marchessault said. “We’re a hard-working team. We don’t have the best skills in the league, and we know that. We win games if we work hard, and we need to do that.”

Minnesota tallied twice in the second to overcome an early Knights lead and went on to a 4-2 victory Jan. 21 at T-Mobile Arena.

In the 5-2 loss at Carolina on Friday in the first game after the break, the Knights allowed two second-period goals, including a backbreaker with 1:37 remaining before intermission.

But the problem goes back even further.

On Jan. 19, Pittsburgh scored twice in the opening 5:56 of the second to wipe out a 3-1 deficit, then had a goal disallowed before the Knights recovered and went on to a 7-3 win.

The Knights have been outscored 59-53 and are tied for 22nd overall in goals allowed during the second period.

Last season, the Knights were one of the league’s best second-period teams with a plus-21 goal differential (94-73).

“This team’s been really successful for the past two years and there’s going to be ups and down with a lot of hockey,” winger Brandon Pirri said. “But at the same time, we’ve got to tighten up some things and right the ship.”

Coach Gerard Gallant juggled two of his forward lines for the game against Florida, but didn’t offer much in the way of analysis afterward.

”I definitely saw some good things, for sure,” he said.

Valentin Zykov was given an extended look alongside William Karlsson and Jonathan Marchessault, and he produced three shots on goal in a career-high 17:32 of ice time.

With Zykov on the ice during 5-on-5, the Knights had 50 percent of the shot attempts (16-16), according to NaturalStatTrick.com.

Reilly Smith shifted to the third line with Cody Eakin and Pirri, and that group owned 56.5 percent of the shot attempts (13-10).

Defenseman Jon Merrill celebrated his 27th birthday Sunday during the Knights’ day off.