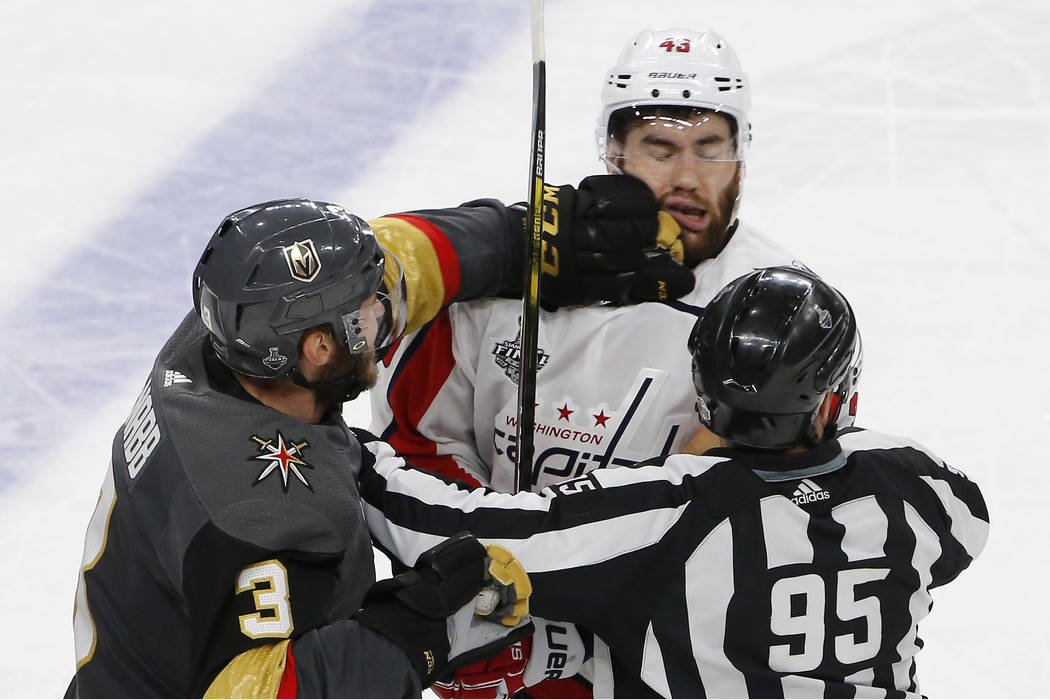 The Capitals’ bruising forward laid a big hit on unsuspecting Golden Knights forward Jonathan Marchessault with 14:07 to go in the third period, sending one of Vegas’ stars into the concussion protocol for about seven minutes of game time to go in the third period of Game 1 on Monday at T-Mobile Arena. The blindside blow turned into a rallying point for the Golden Knights though, with the team outscoring Washington 2-0 the rest of the way.

“It was a wake-up call for all of us,” Vegas defenseman Nate Schmidt said. “We weren’t playing that well at that point. We realized then that we needed to get our feet moving more because we were too flat-footed at times.”

The hit came on the left side of the neutral zone after Marchessault moved the puck ahead to teammate William Karlsson. While Marchessault was coasting by the red line and watching the play develop, Wilson rammed into him after taking three strides following the pass.

Wilson was given an interference penalty for the hit, but Golden Knights coach Gerard Gallant said he believed it should have been a major penalty. Marchessault expects Wilson will be hearing from the NHL.

Another look at Wilson’s hit on Marchessault pic.twitter.com/f7CxFarqEf

“I think the league is going to take care of it,” Marchessault said. “I never saw him coming. The puck is away for a couple seconds for sure.

“But whatever, he’s a guy who plays hard and distributes big hits out there and that’s just the way it goes sometimes.”

Capitals coach Barry Trotz, on the other hand, said he expects to have Wilson available for Game 2. Wilson was non-apologetic after the game, saying there was nothing dirty about the play.

“He might have been a little bit surprised by it but it wasn’t an aggressive hit,” Wilson said. “He looked fine at the end when he was yelling at me from the bench.

“I believe it was a good, clean hit. It’s playoff hockey. There’s going to be big hits.”

The hit might have been retaliation for an uncalled cross-check three minutes earlier on the Golden Knights’ fourth goal. Vegas forward Ryan Reaves appeared to knock Capitals defender John Carlson to the ground in front of the net before scoring his second of the playoffs, but the referees did nothing.

“I didn’t like the fourth goal,” Trotz said. “I thought we were going on the power play there.”

Wilson then appeared to take matters into his own hands, but his big statement may have hurt his team more than it helped it. The hit appeared to wake the Golden Knights up in time for them to take a 1-0 lead in the series.

“We’re going to stand up for one of our players,” Gallant said. “It was a good reaction from our team.”