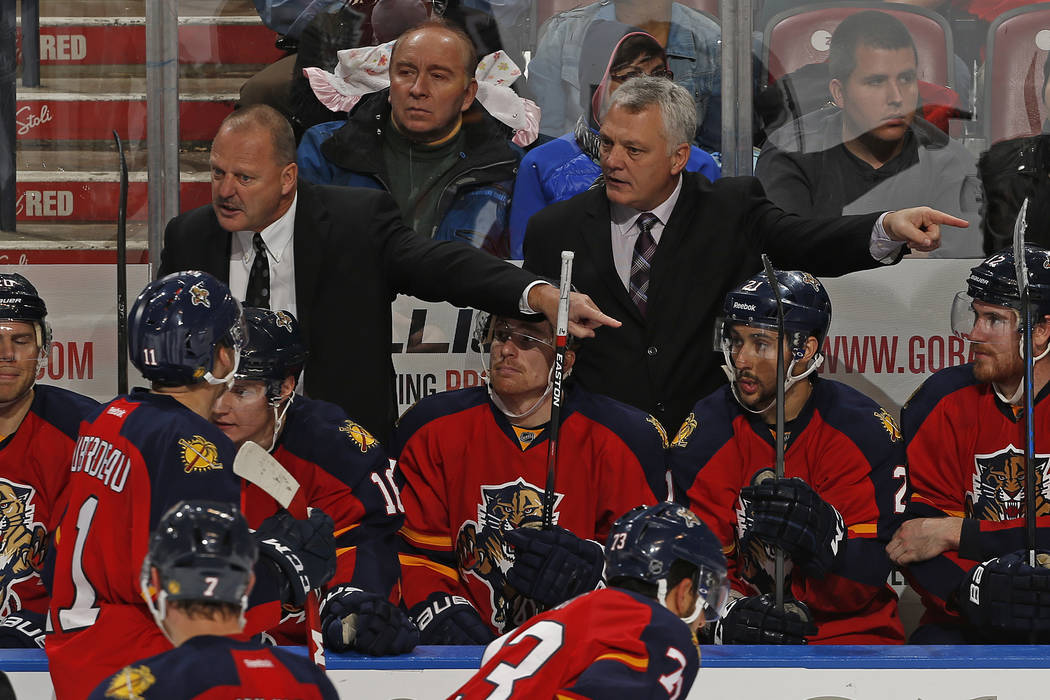 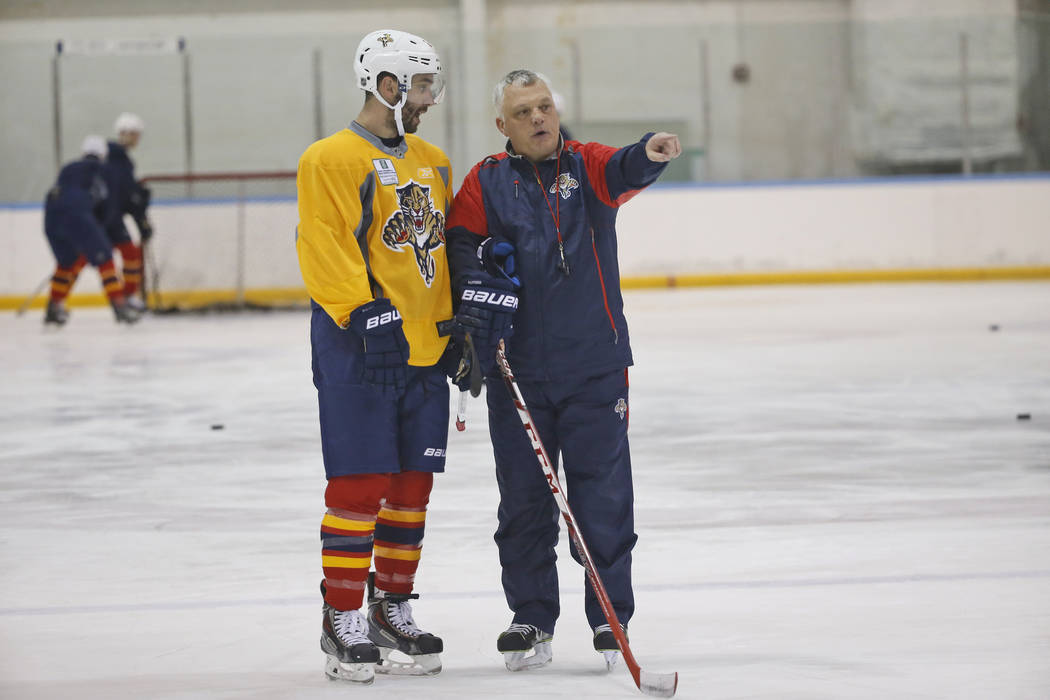 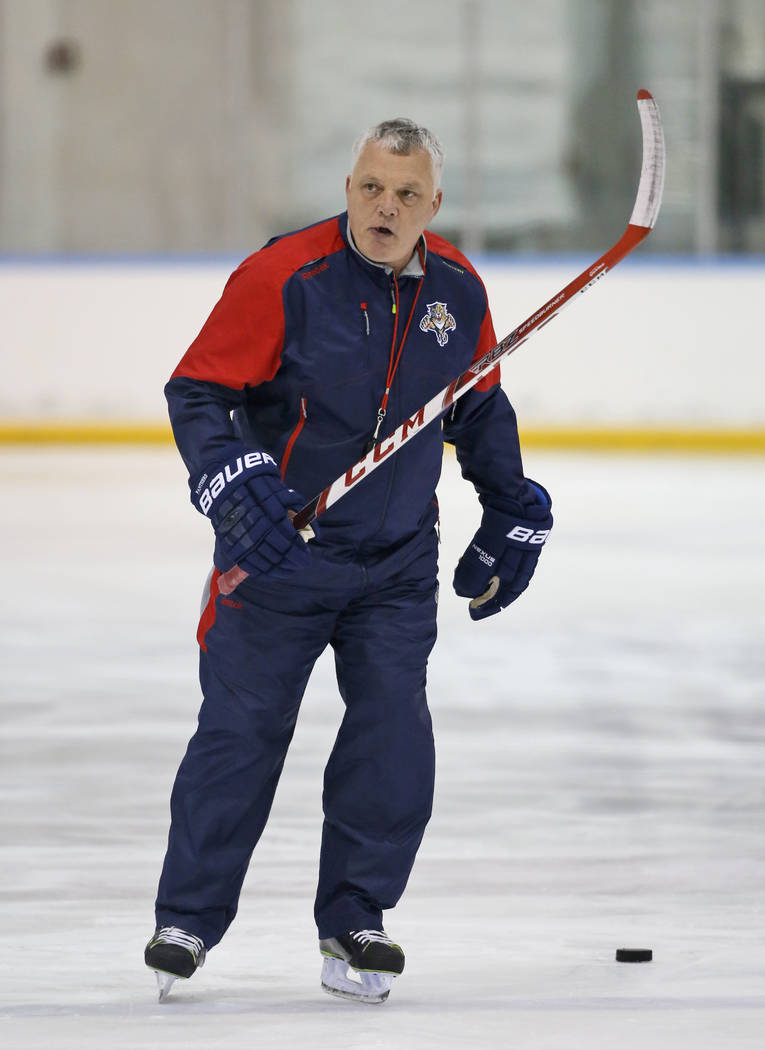 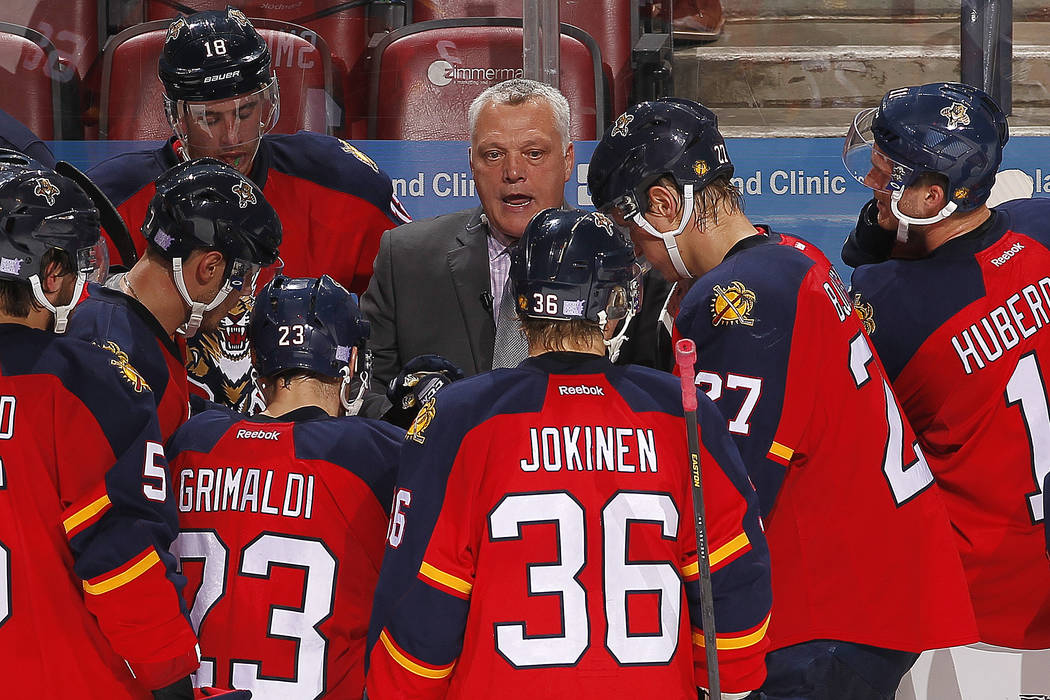 Assistant Coach Mike Kelly of the Florida Panthers directs his team from the bench during a break in the action against the Buffalo Sabres at the BB&T Center on November 12, 2015 in Sunrise, Florida. (Eliot J. Schechter/NHLI Getty Images via Vegas Golden Knights) 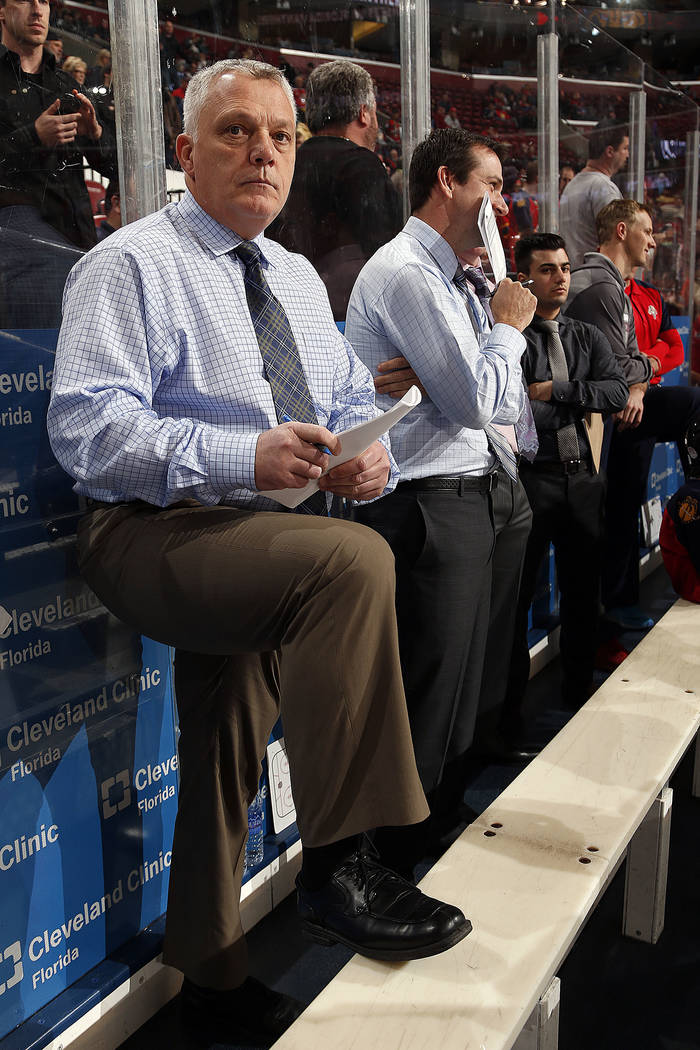 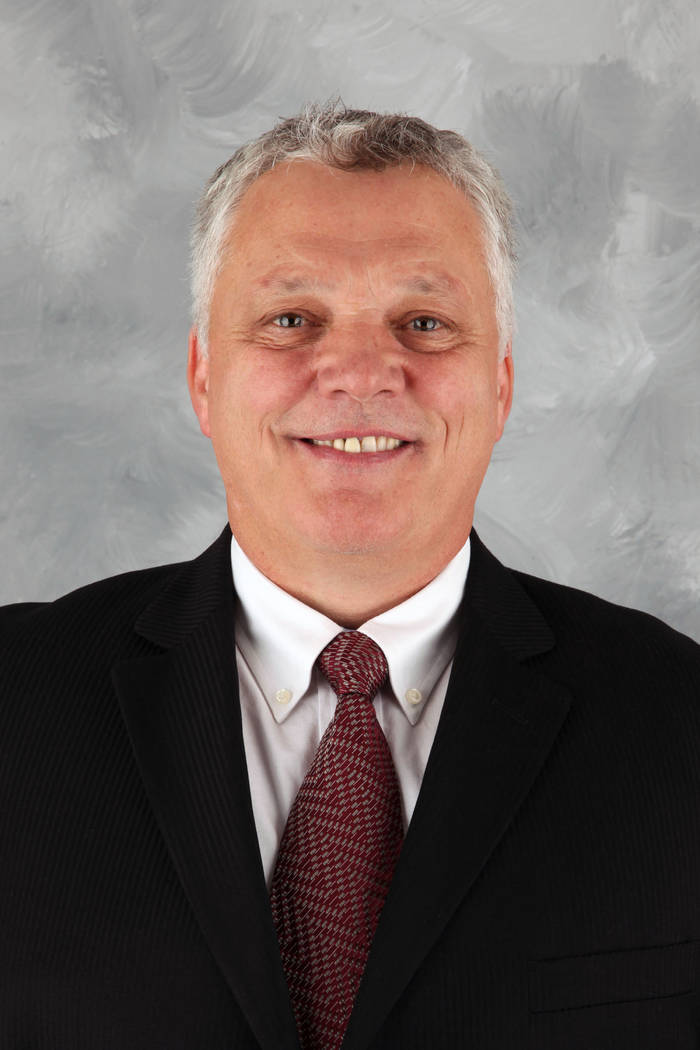 Mike Kelly of the Florida Panthers poses for his official headshot for the 2016-2017 season on September 22, 2016 at the BB&T Center in Sunrise, Florida. (Eliot J. Schechter/NHLI Getty Images via Vegas Golden Knights) 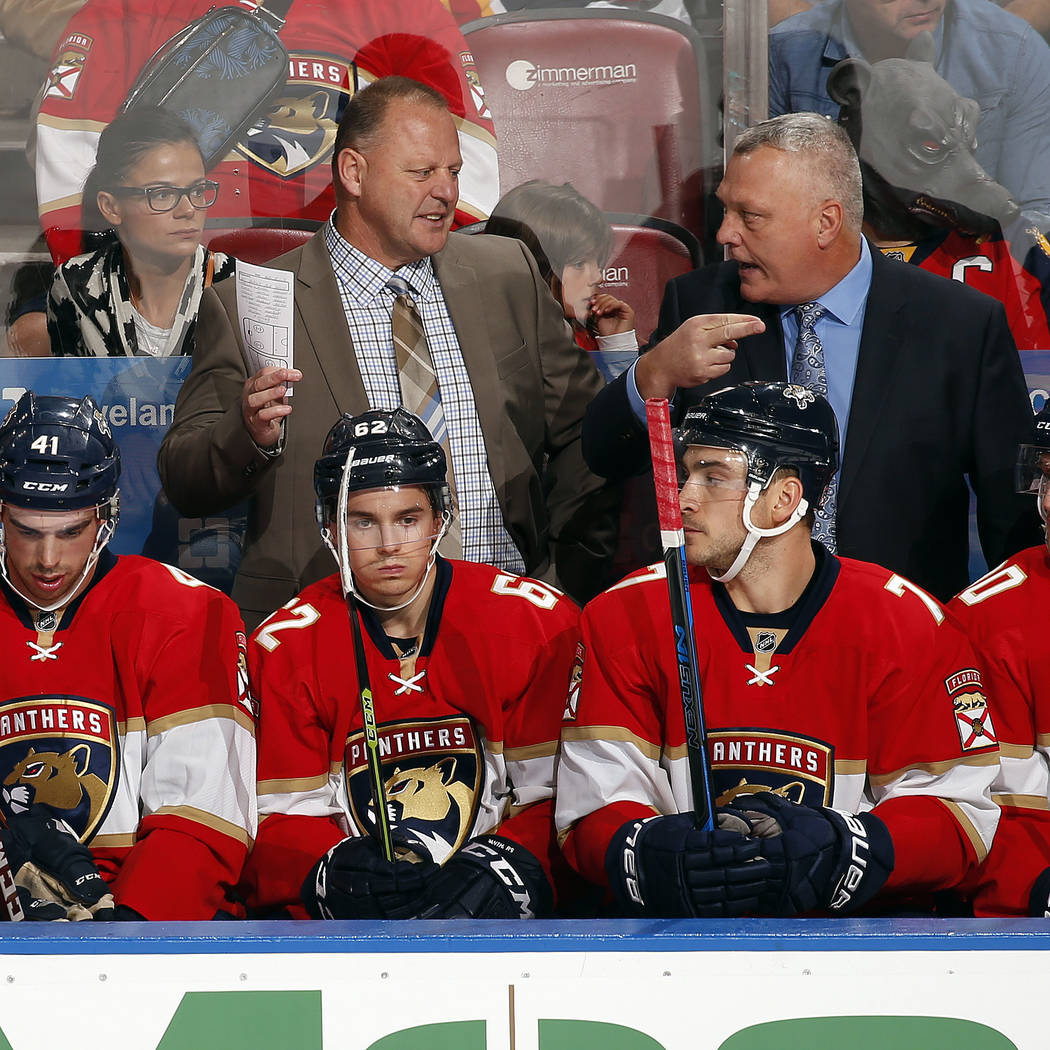 Head Coach of the Florida Panthers Gerard Gallant chats with Assistant Coach Mike Kelly during a break in the action against the Detroit Red Wings at the BB&T Center on October 15, 2016 in Sunrise, Florida. (Eliot J. Schechter/NHLI Getty Images via Vegas Golden Knights)

Golden Knights head coach Gerard Gallant turned to an old friend for the first hire of his staff.

The team announced Thursday that Mike Kelly has been hired as an assistant coach, reuniting he and Gallant from earlier this season when the two were with the Florida Panthers. They also worked together in junior hockey with the Saint John Sea Dogs.

“I’m excited to be back working (with Gallant),” Kelly said. “He’s a very respectful person and he’s easy to get along with. He allows you to do your job and put your personal slant on it.

“It’s also exciting to be part of something new. You’re starting from scratch and trying to build something that will last. They’ve brought in a lot of quality people and I’m looking forward to it.”

Gallant said Kelly is someone he trusts and when he was hired in April, Kelly became an obvious choice.

“It was an easy call,” Gallant said. “Me and Mike are a good fit. We have a comfort level with each other and he’s a technical guy who can do a lot of things. When I brought up his name with George (McPhee, Knights general manager), George was familiar with Mike and he had no problems with him joining the staff.”

Kelly joins the Golden Knights after serving under Gallant with the Panthers from 2014-17. In that time Kelly helped guide the Panthers to a record of 120-91-35 and a first-place finish in the NHL Atlantic Division in the 2015-16 season. Both were fired Nov. 27 in Raleigh, North Carolina, after a 3-2 loss to the Carolina Hurricanes.

Prior to working with the Panthers, Kelly spent four seasons with the Saint John Sea Dogs of the Quebec Major Junior Hockey League. There he served as head coach and general manager (2012-14) and director of hockey operations/associate head coach under Gallant (2010-12). He helped lead the Sea Dogs to three first-place finishes, three league final appearances, two QMJHL championships (2011 and 2012) and one Memorial Cup (2011).

Kelly said he’ll do whatever is needed, whether it’s work on the Knights’ special teams or handle the forwards or even watch from the press box on occasion.

“I did a little bit of everything in Florida,” he said. “But whatever Turk (Gallant) needs. The key is to get a little better every day.”

Gallant said the rest of the coaching staff is expected to be announced by the NHL Expansion Draft on June 21.

“We’re still working on that,” he said. “But we should have it done soon.”