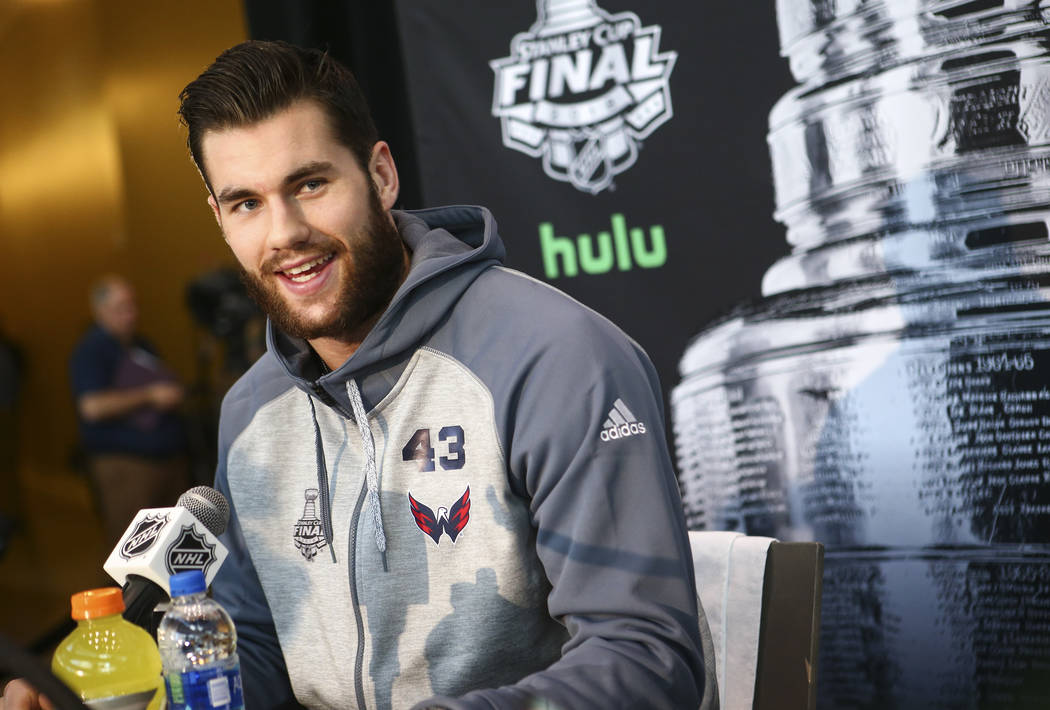 There aren’t many opposing players who would consider themselves friends with Capitals’ forward Tom Wilson once the puck drops.

Even his old roommate on the road from early in their careers, Golden Knights’ defenseman Nate Schmidt, hasn’t reached out as the teams prepare to faceoff against one another in the Stanley Cup Final.

“He knows better,” Wilson said with a laugh about whether he had heard from Schmidt this week. “We talked a bit throughout the year, but at this time of year that’s not really a good thing. We’re both focused. I’m sure we’ll be going head to head at some point and we’ll see what happens.”

When the 6-foot-4-inch, 220-pound Wilson is involved, that often means some sort of physical altercation.

The polarizing forward has spent more time in the penalty box than any other player since he entered the league in 2013. Wilson’s 255 infractions in the regular season added up to 806 minutes during that span.

Wilson, 24, has also grown quite familiar with the league’s department of player safety. He has already served a three-game suspension this postseason for a hit that concussed and broke the jaw of Pittsburgh’s Zach Aston-Reese.

After Wilson and Braydon Coburn drew coincidental minor penalties in Game 7 of the Eastern Conference Final, Wilson bolted from the penalty box and immediately dropped his gloves as he headed to meet the Tampa Bay Lightning’s Coburn before administering a beatdown.

Yet it would be unfair to portray the Toronto native as nothing more than an old-school goon.

He is an integral part of the Capitals’ first line along with Alex Ovechkin and Evgeni Kuznetsov, and Wilson continues to evolve as an all-around player.

“He’s definitely a force with that line,” said Schmidt, who played with Wilson for four seasons (2013-2017) in Washington. “I think he’s done a great job with them and I think he’s done a tremendous job of adding to his game. Not that he didn’t have it before, but he’s really added to his scoring touch. He had to grow himself in order to play on that line. He’s such a physical presence.”

Wilson doubled his career high with 14 goals this season and totaled 35 points as he continued to make his presence felt on the ice.

“I feel like he has more skill than you think with the puck, but sometimes he tries to play simple and just make the right plays,” Kuznetsov said. “At practice, you see how much skill he has with the puck. You’re starting to see more and more of it now.”

Wilson is proud of his development.

“It’s been awesome,” he said. “Playing in this league is the best thing ever. When I came in the league, I just kind of wanted to do whatever I could to be in the lineup every night. Every year, you get more minutes and more responsibilities and it’s on the player to take advantage of that. I’ve tried to round my game out. It’s been a fun ride and obviously a good year for our team. Hopefully, we can get this last goal done.”

There may not be a whole lot of fans around the league outside of Washington happy for him if that happens, particularly in Pittsburgh.

Wilson said he was inundated on social media by angry Penguins fans after the hit that drew a suspension.

“It’s pretty funny what people will say behind their computer or from their phones on Twitter,” said Wilson, who was particularly bothered by his family’s home address being posted on the platform.

At least it was nothing new for the Wilsons.

“They’ve dealt with it all to this point,” he said of his family. “I’ve never been a player that’s been loved by the team I’m playing against and they learned to deal with it at a young age. They’re enjoying (this postseason run). It’s a lot of fun and they’re right there with me being a huge part of it and a huge reason I’m here.”

He’s not likely to win over many Vegas fans over the course of this series, either.