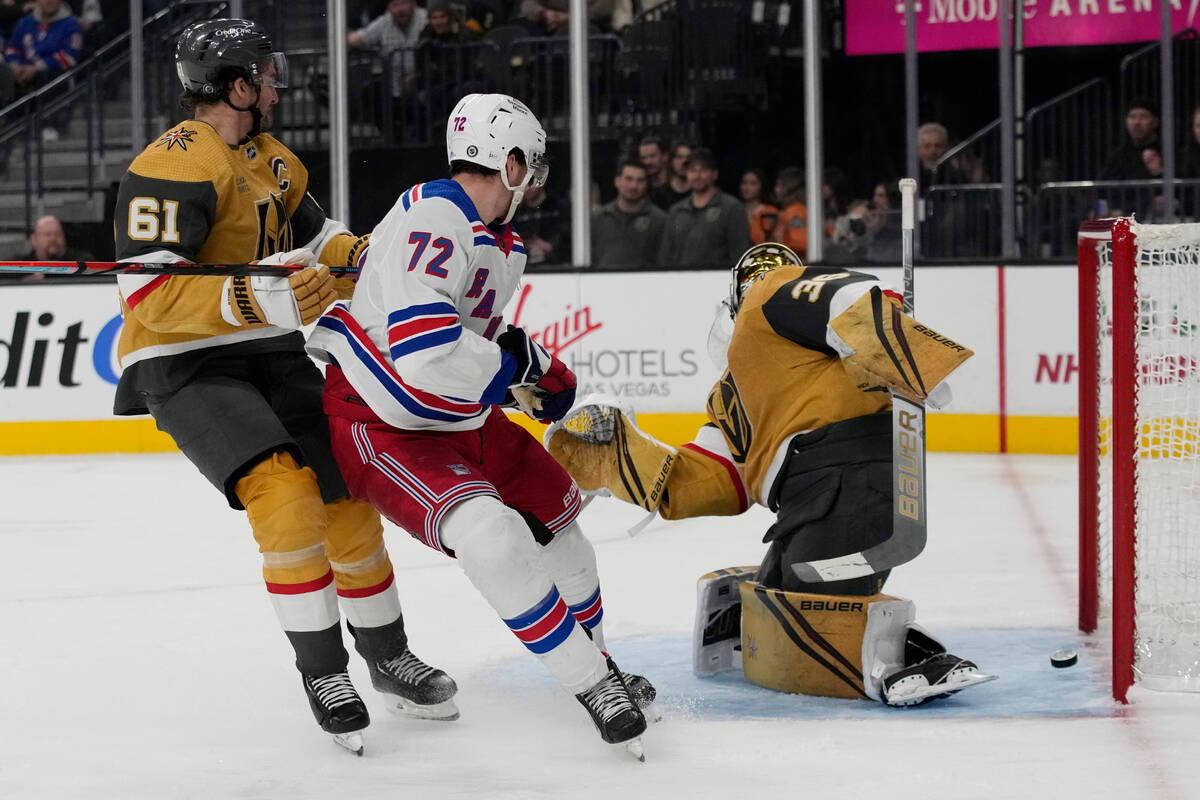 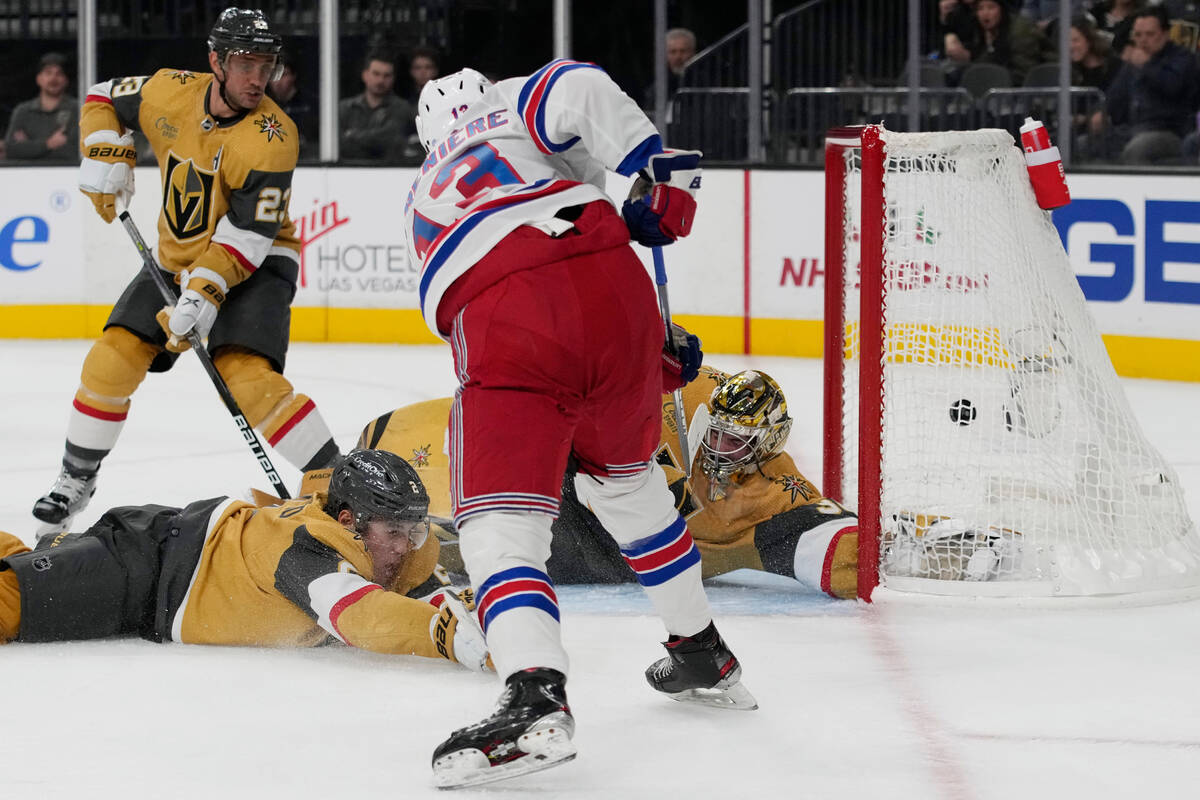 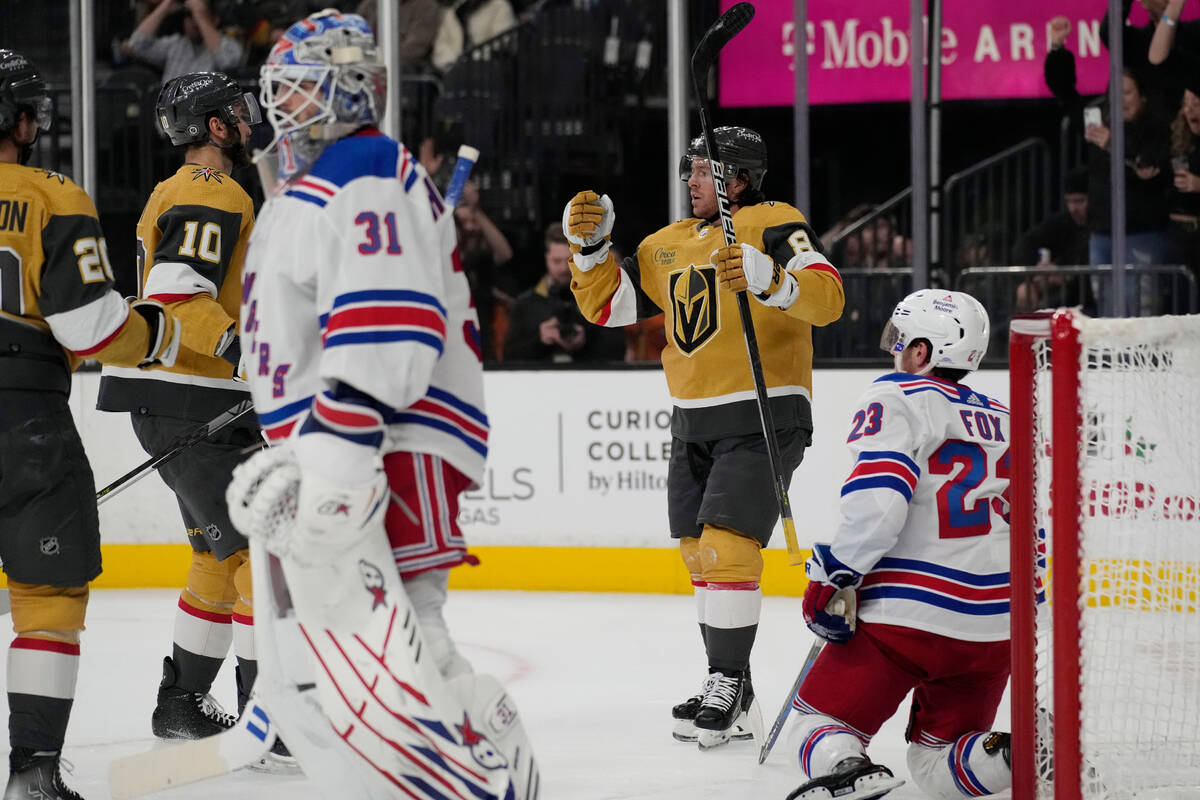 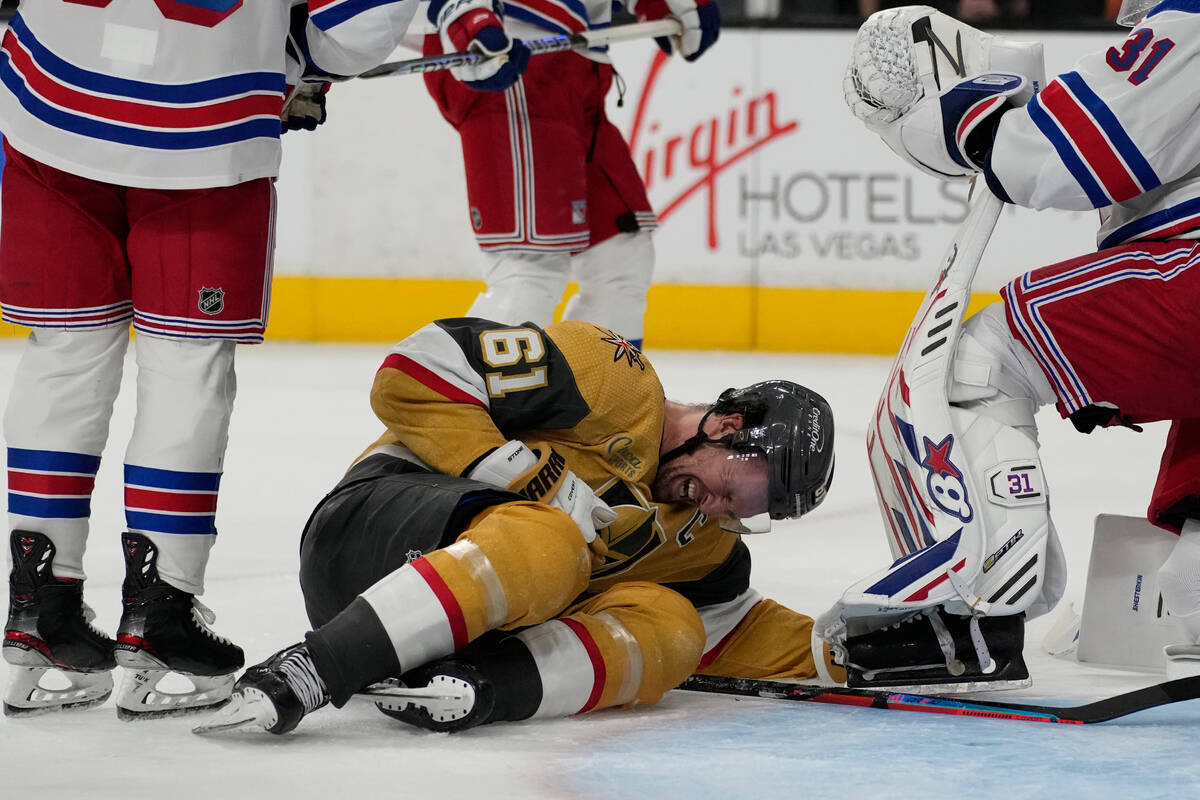 Vegas Golden Knights right wing Mark Stone (61) writhes on the ice after a play against the New York Rangers during the second period of an NHL hockey game Wednesday, Dec. 7, 2022, in Las Vegas. (AP Photo/John Locher) 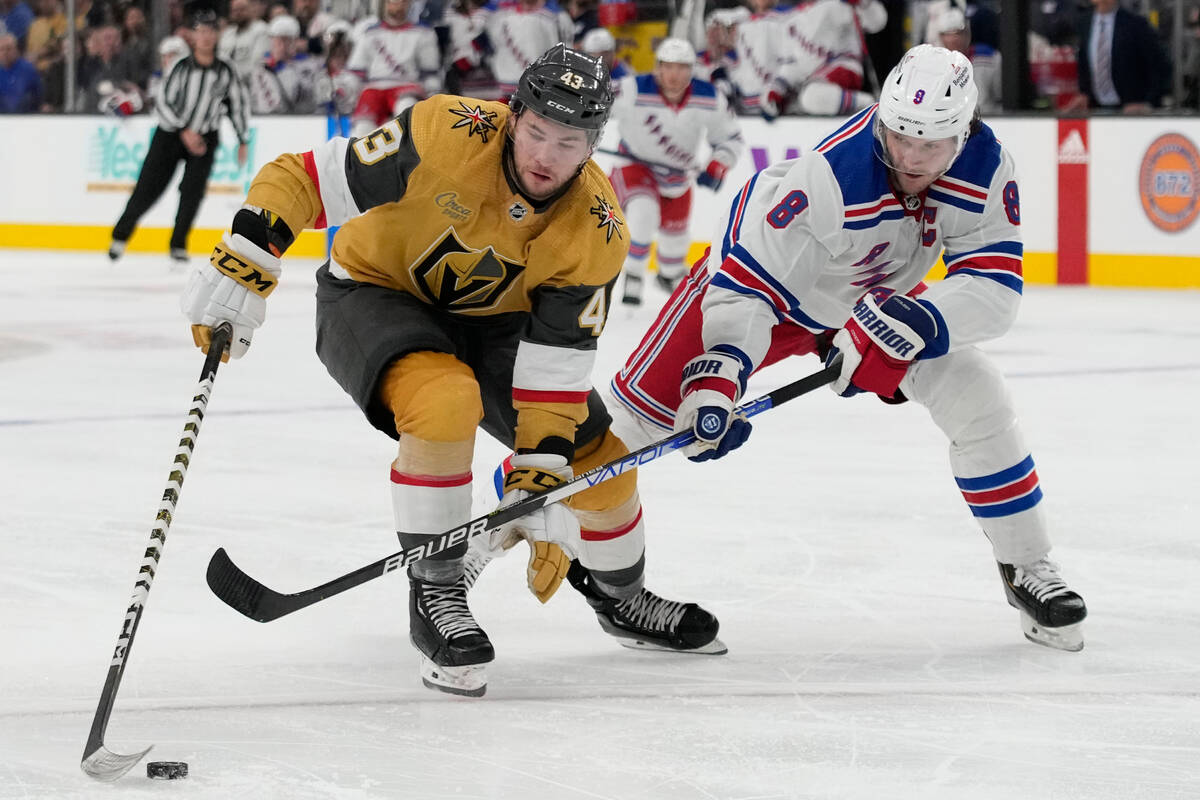 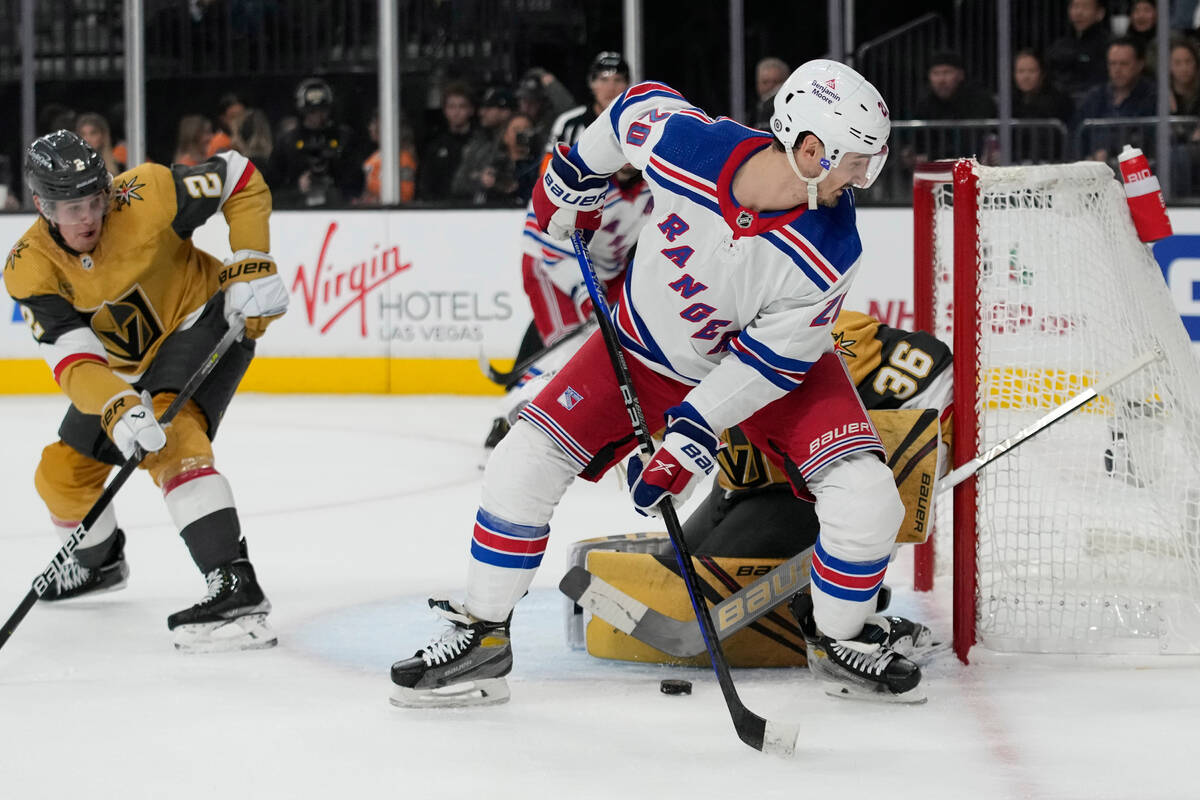 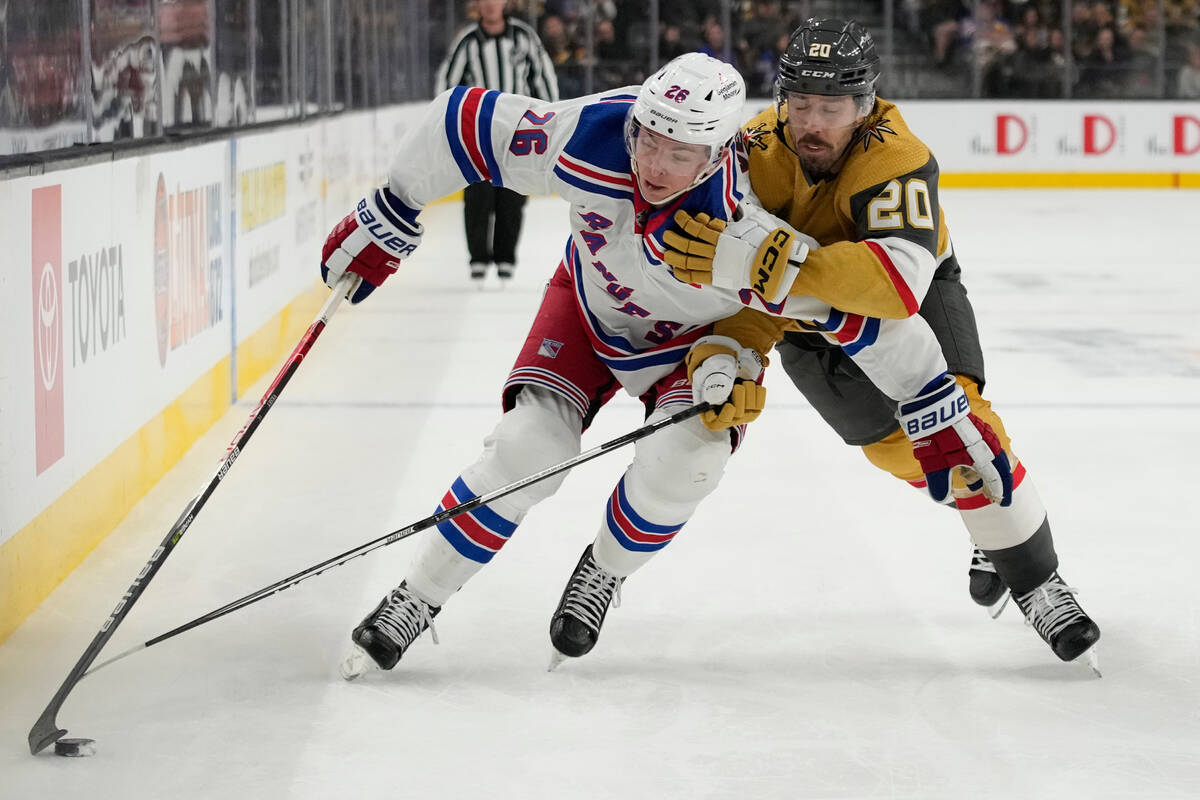 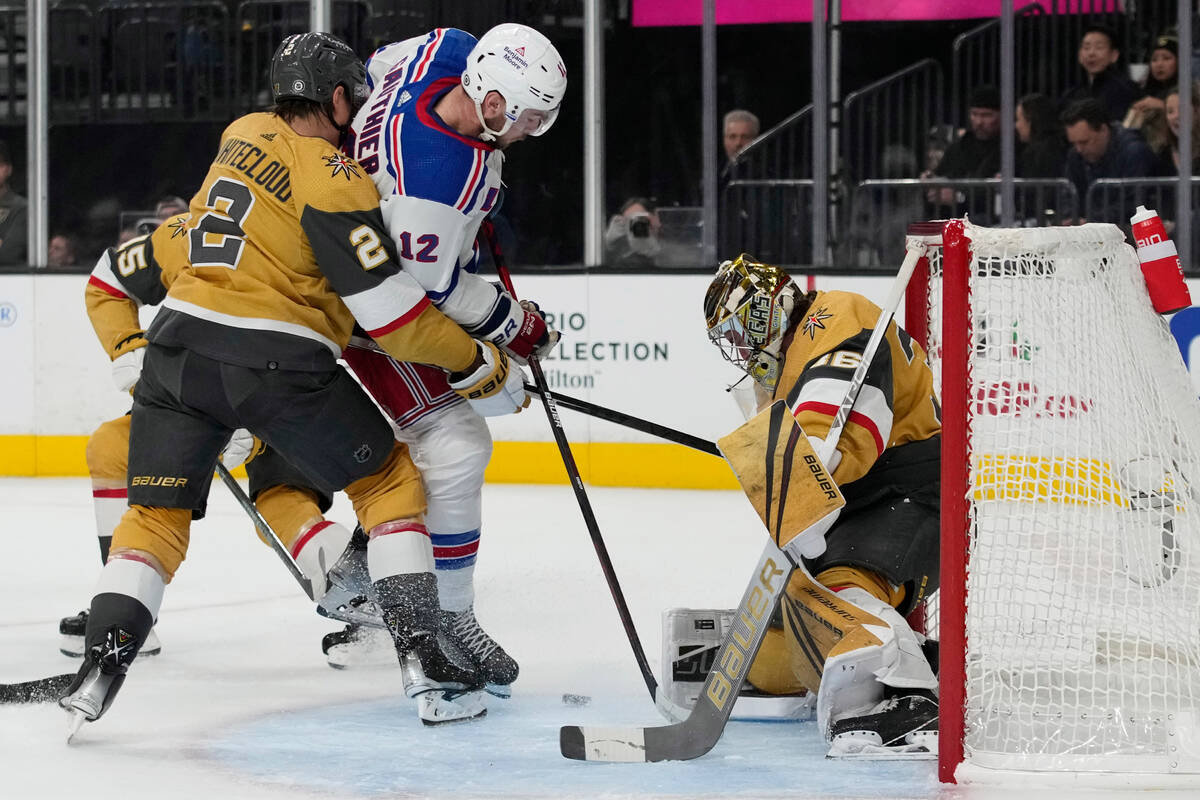 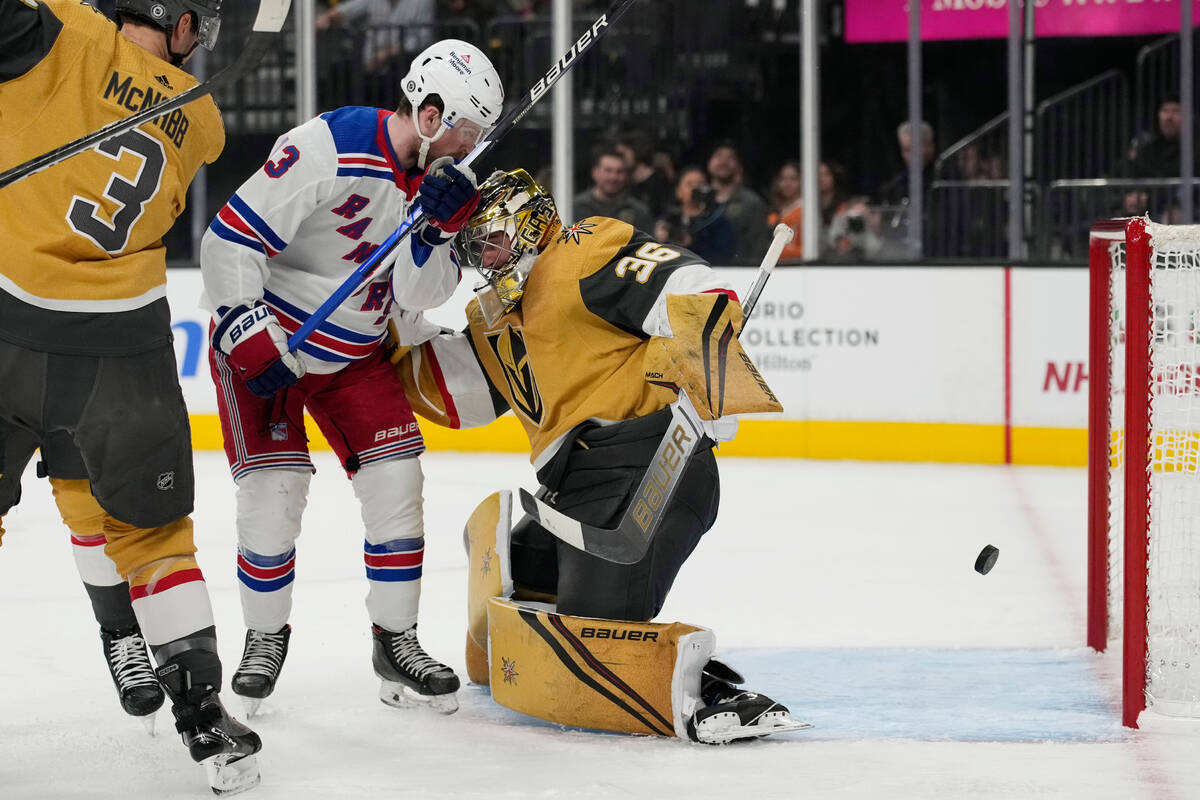 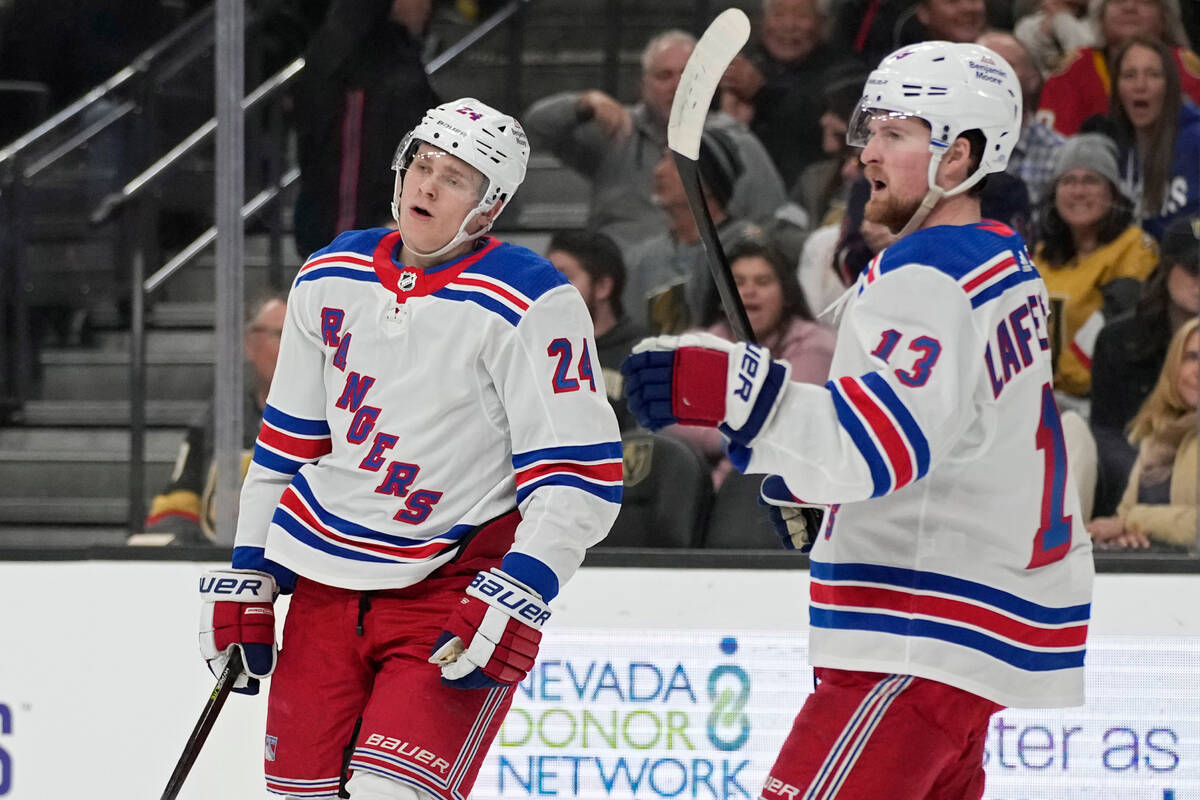 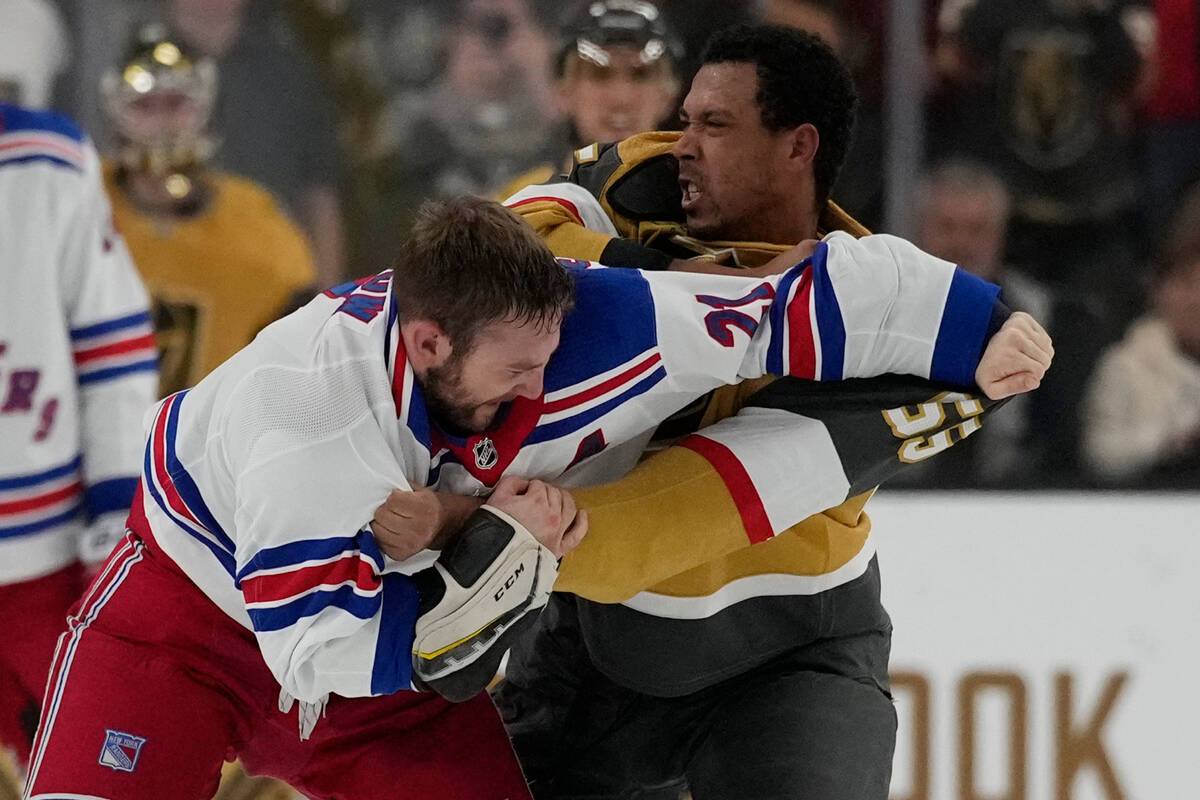 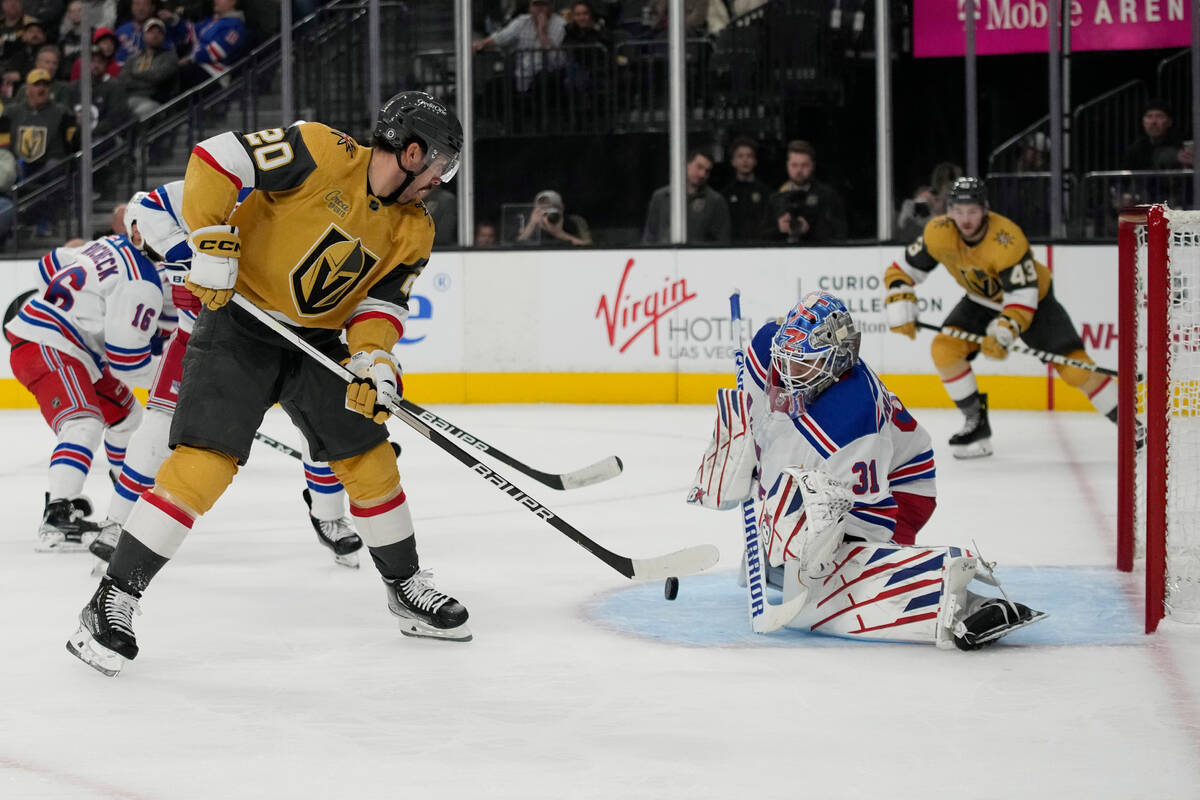 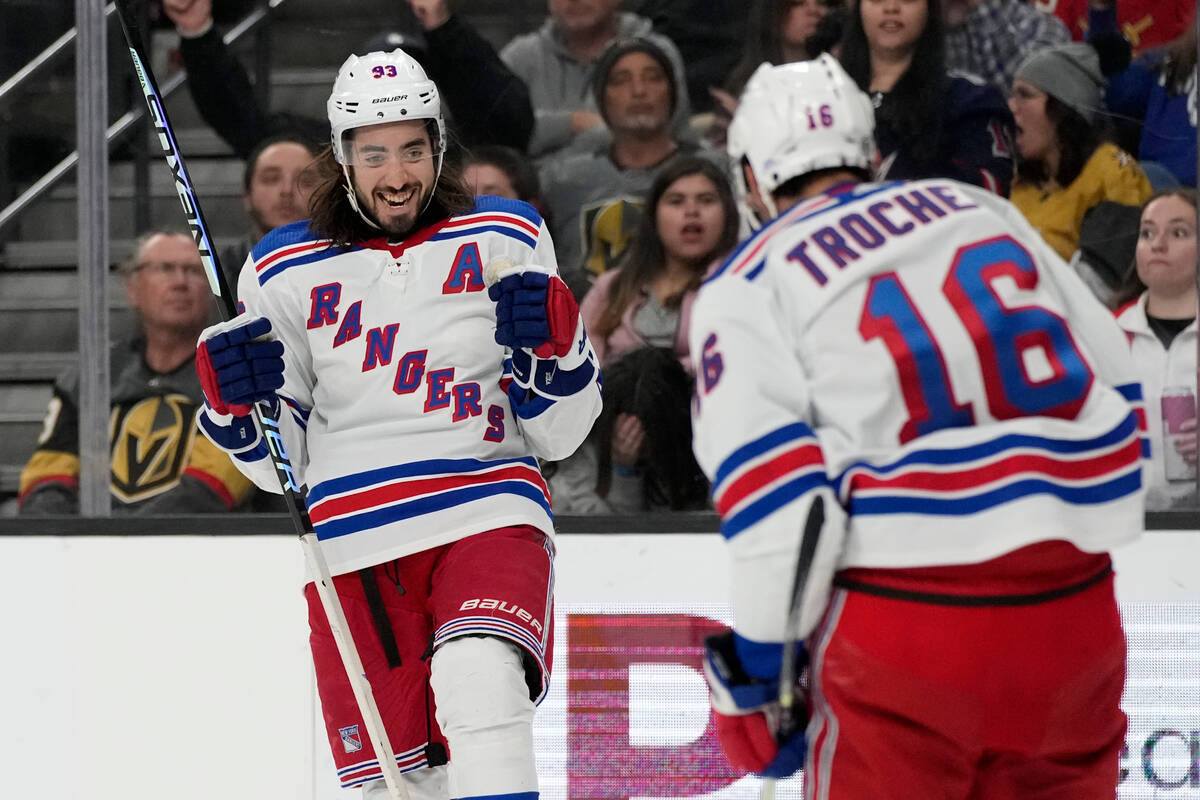 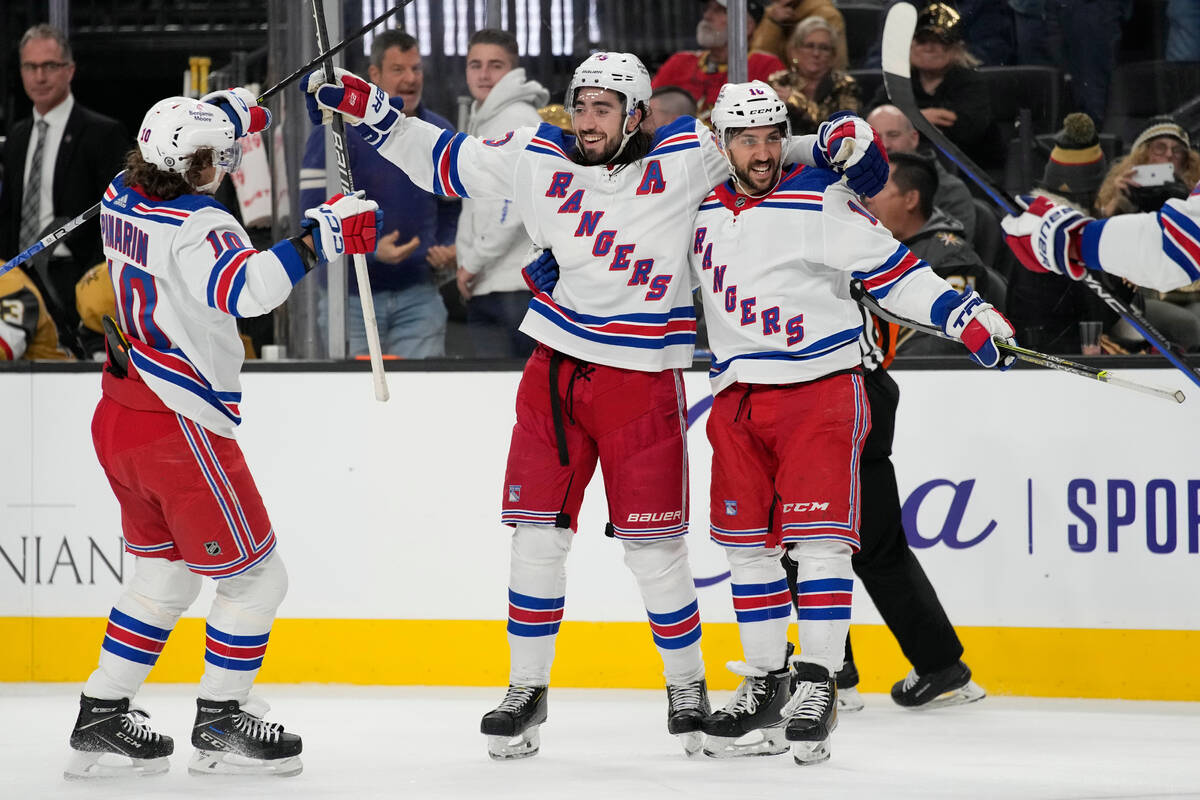 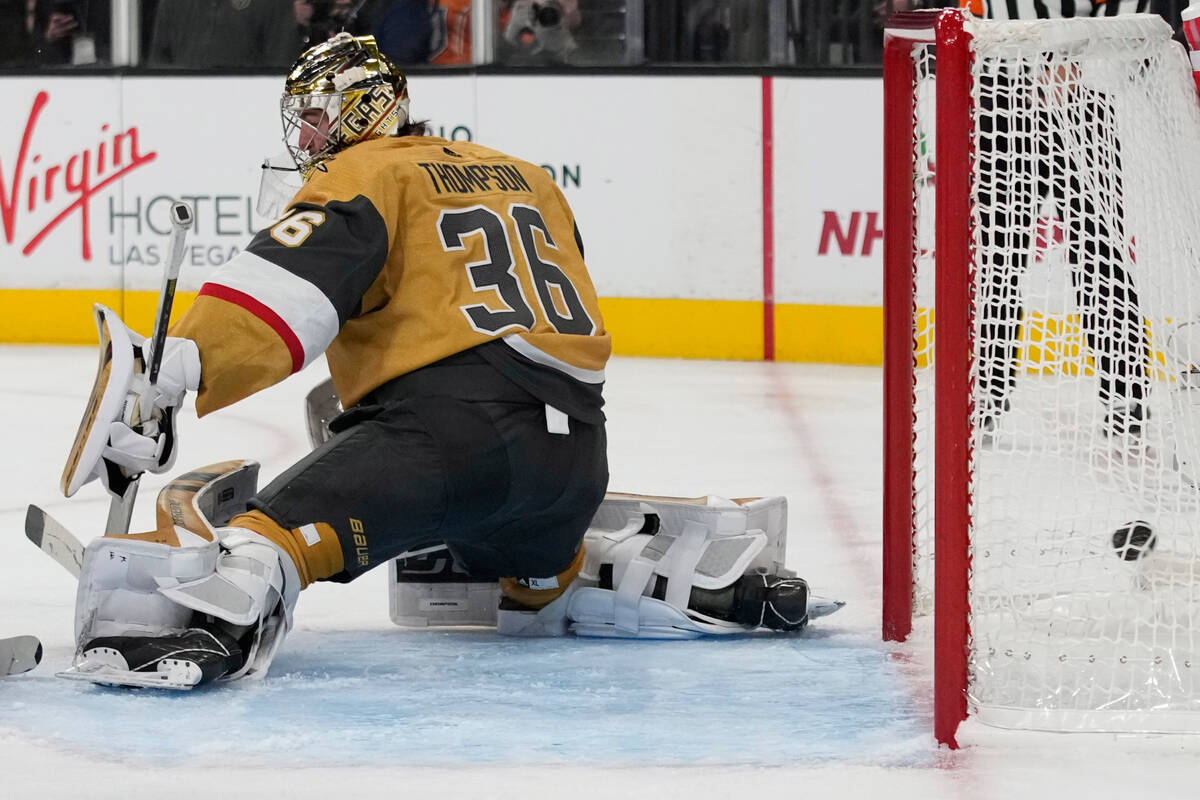 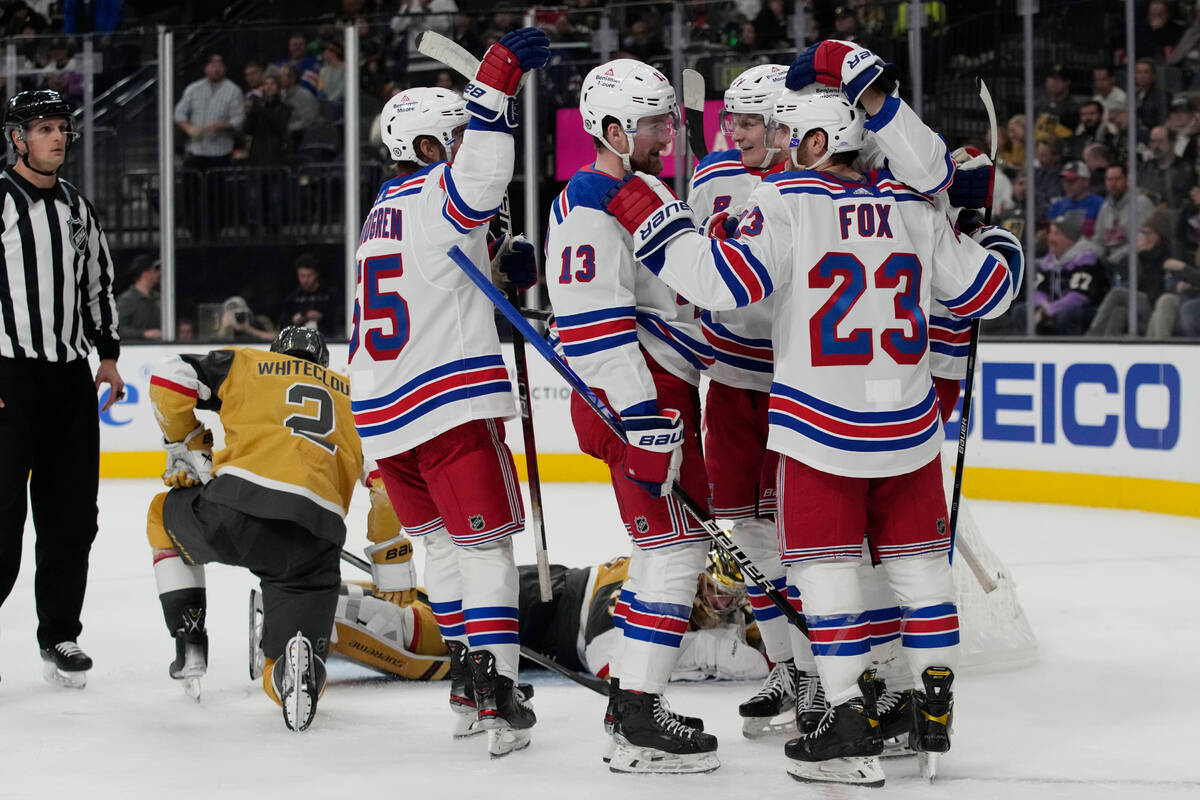 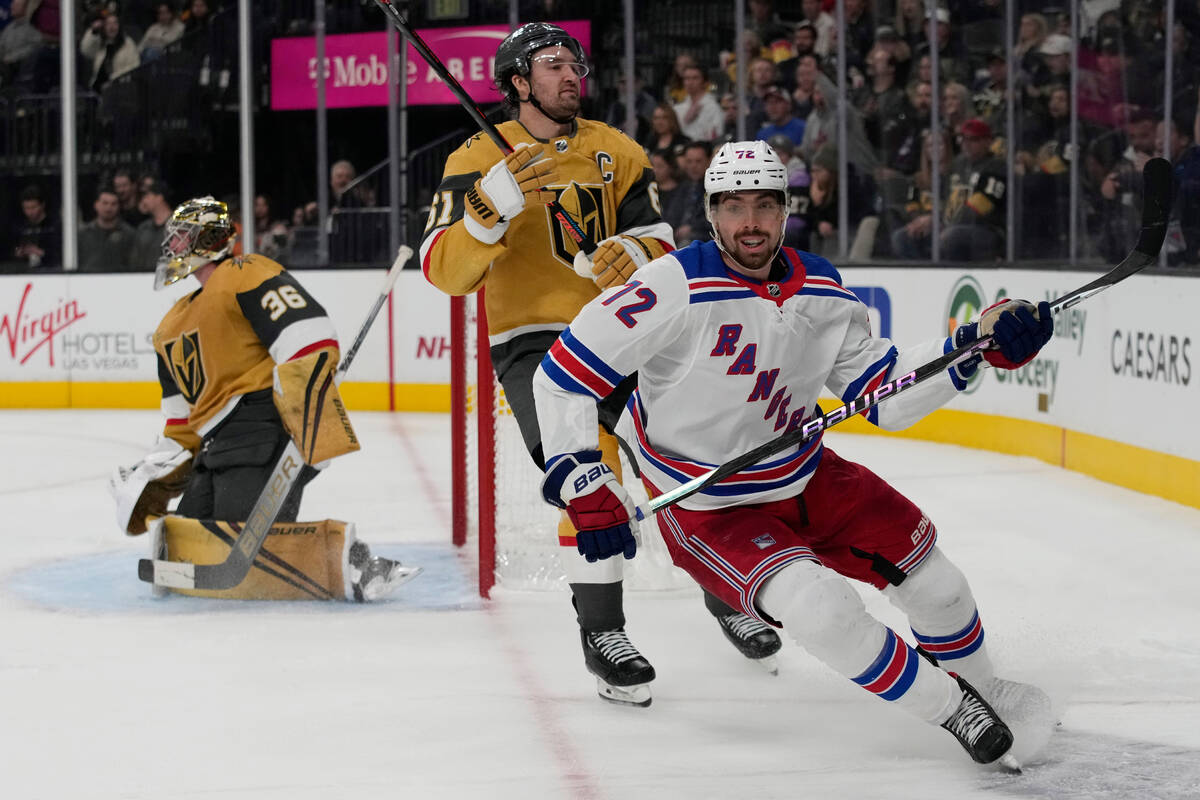 Logan Thompson’s stick was splintered in two behind the Golden Knights’ net as he skated to the bench.

The goaltender’s frustration boiled over with 8:26 to play Wednesday night. The first two goals by the New York Rangers in the third period were a gut punch. The third seemed like a knockout blow. The fourth was just piling on, and Thompson’s stick paid the price after he swung it at his goal post.

The Knights, who entered the third period tied 1-1 with the Rangers, allowed four goals in a 5:35 span to lose 5-1 at T-Mobile Arena in front of an announced crowd of 17,939. The loss was their third straight at home.

The Knights were short-handed, coming off a four-game trip and facing a hungry Rangers team fighting to get back in the playoff picture.

“We were not a very mature team tonight when it came to how to get your game back in the third period,” coach Bruce Cassidy said. “Sure enough, it’s gone, gets away.”

The Knights (19-8-1) started slowly. They were outshot 15-5 in the first period and trailed 1-0 after a tip from right wing Kaapo Kakko.

A five-on-three power-play goal from right wing Jonathan Marchessault — his third goal in three games — tied the score with 6:22 left in the second period. The Knights had an opportunity to get their crowd fired up and take control.

They couldn’t do it.

Center Mike Zibanejad fired a one-timer from the left circle to put the Rangers (13-10-5) ahead 2-1 with a power-play goal 5:59 into the third period. Center Filip Chytil scored 24 seconds later while Zibanejad’s goal was still being announced.

Left wing Alexis Lafreniere made it three goals in 1:53 by scoring 7:51 into the third. Another power-play one-timer by Zibanejad, this time off a faceoff, put the Rangers up 5-1 with 8:26 to go and shattered Thompson’s stick.

“Just a lack of commitment to defend well,” Marchessault said. “Not getting enough forecheck or anything like that. It was just a really bad period.”

The win was former Knights coach Gerard Gallant’s first as a visitor at T-Mobile Arena. He and the Rangers lost 5-1 on Jan. 1.

It was also an important win for the team in the standings. The Rangers, who made the Eastern Conference Finals last season, moved into a tie with the New York Islanders for the final wild-card spot.

“Obviously, I’m happy to beat Vegas for the first time, but more than that, it’s a big win for our group,” Gallant said. “We needed a win right now, and that was a huge game for us.”

Tensions between the teams escalated in the second period.

First, Knights captain Mark Stone was cross-checked in front of the net by defenseman Ryan Lindgren with 6:50 left in the period. Then defenseman Shea Theodore was sent into the Knights’ goal away from the puck by right wing Barclay Goodrow 2:27 later. The collision caused the net to crash into the back of Thompson’s head.

Goodrow and right wing Keegan Kolesar were sent to the penalty box after the play. When they exited, they skated a few strides into the Knights’ zone before dropping their gloves and fighting.

“I didn’t like Lindgren doing a dirty play on (Stone) there,” Marchessault said. “I think it was dirty.”

Cassidy said the Knights game-planned to take away Zibanejad’s favorite shot. His one-timer has helped him score 75 power-play goals in the past six seasons, the fifth-most in the NHL.

Zibanejad scored twice as the Knights’ troubles on the penalty kill continued. Their opponents are 8-for-23 (34.78 percent) in their past six games.

“We know who they’re trying to get the puck to and what their objective is,” defenseman Zach Whitecloud said. “It’s just a matter of execution. On special teams, they executed more than we did.”

The loss continued a weird trend for the Knights.

They’ve been OK at T-Mobile Arena. They’re 7-6 at home while outscoring opponents 33-31. They then become almost unbeatable on the road.

“It’s obviously extra disappointing for our group to not show up in front of our fans like that,” Marchessault said.