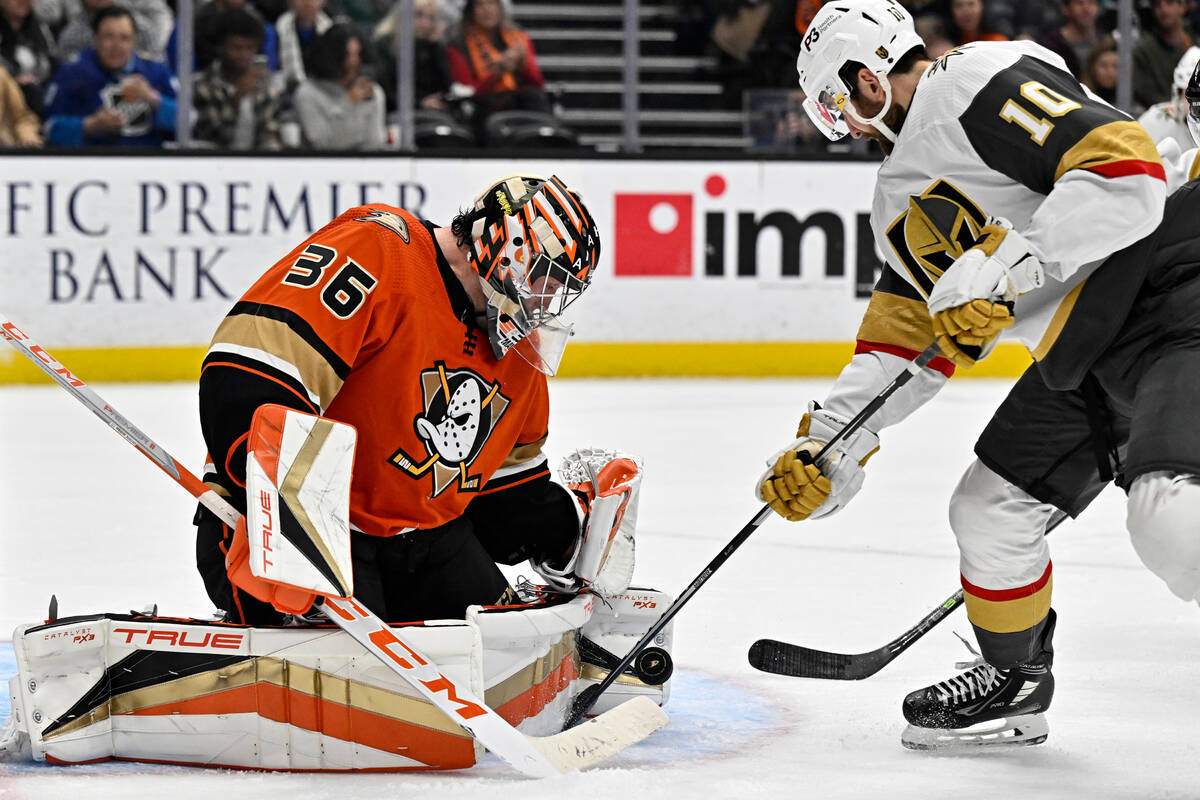 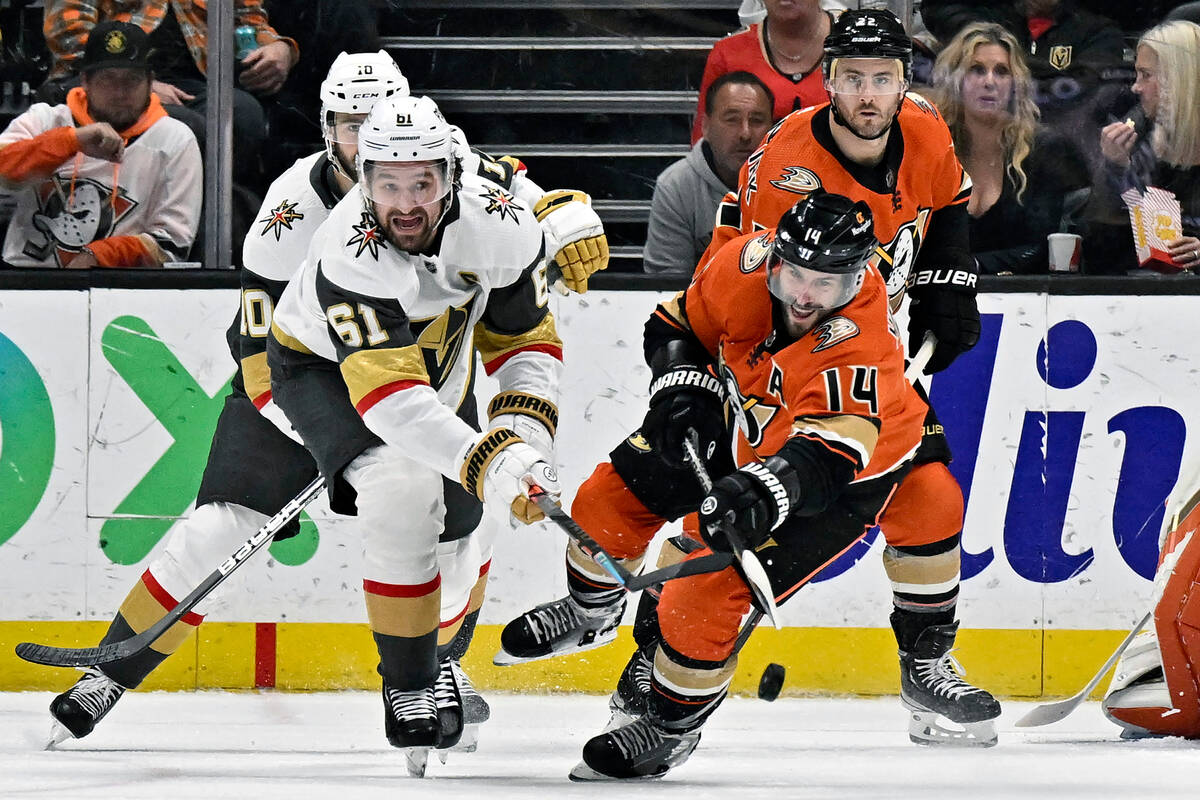 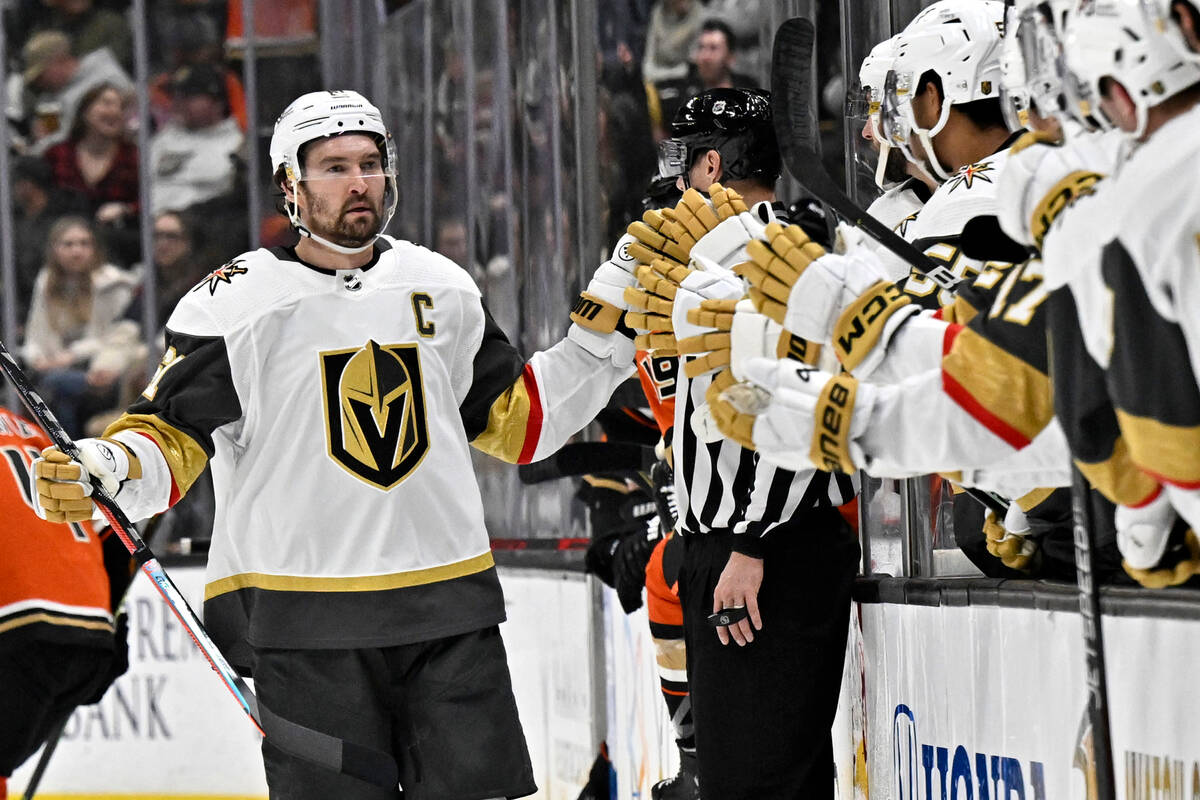 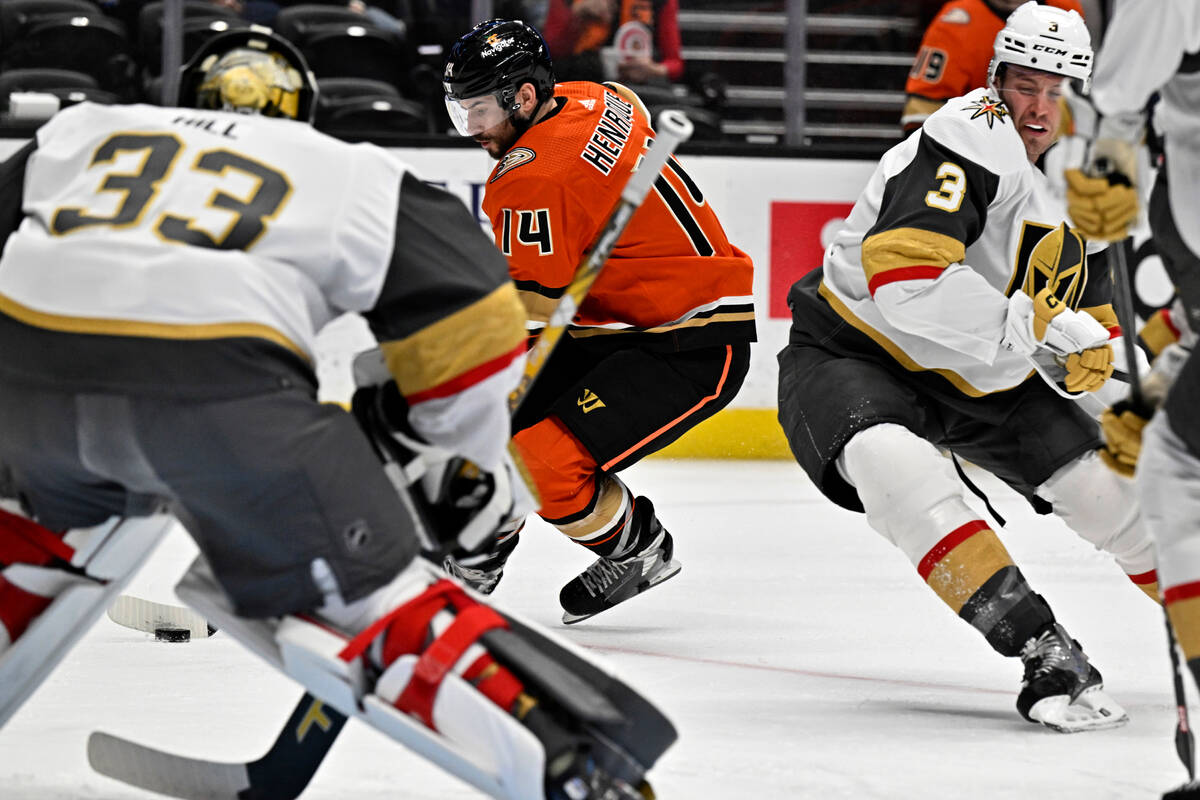 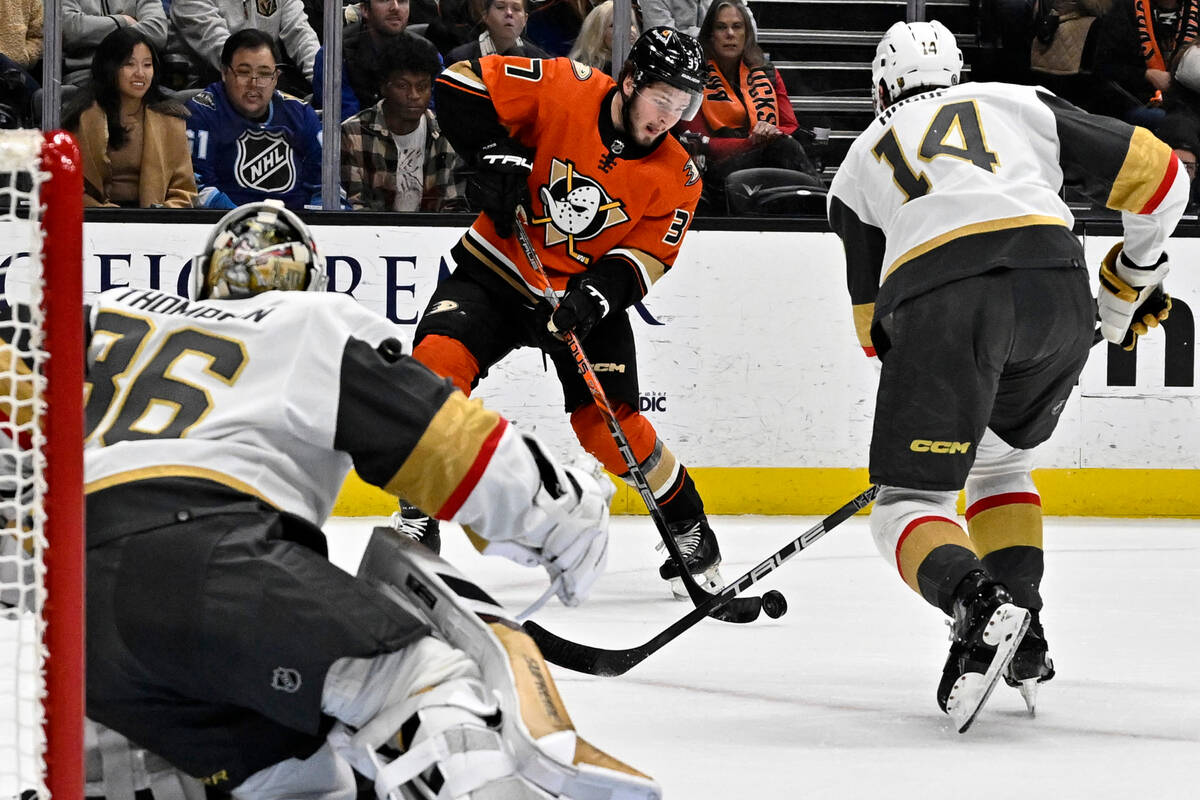 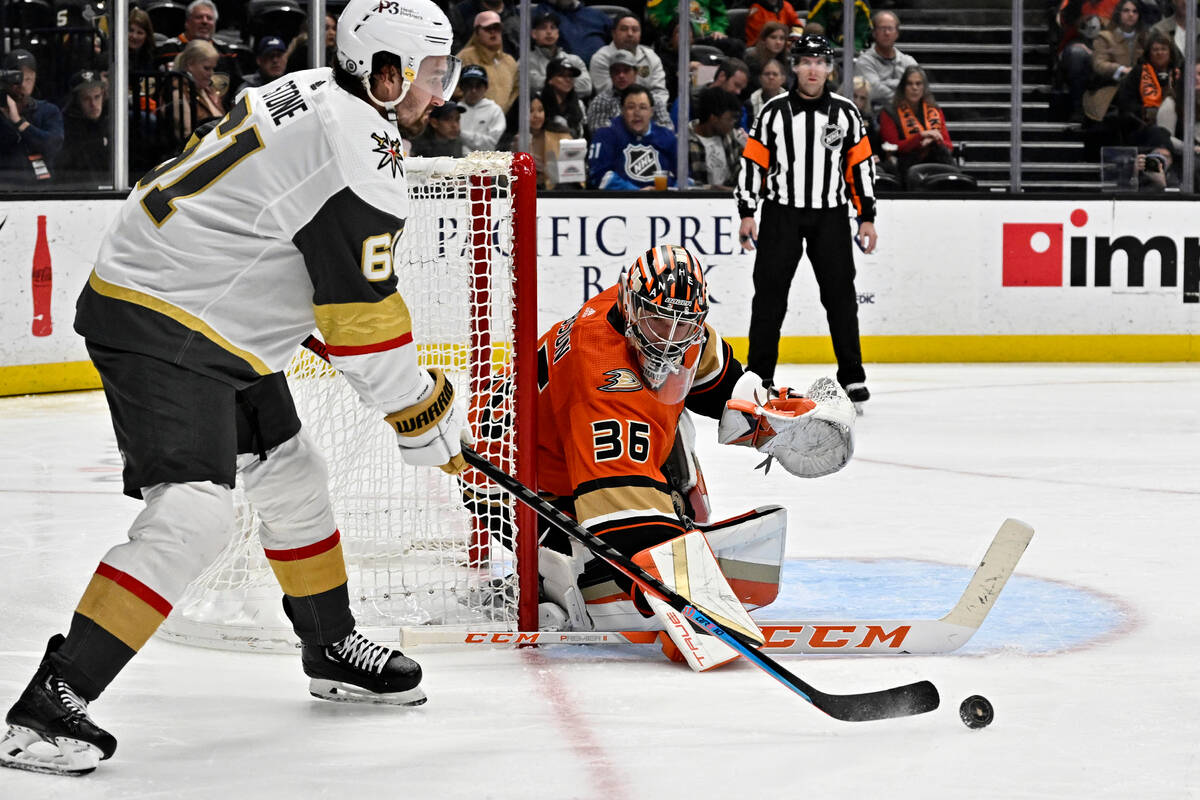 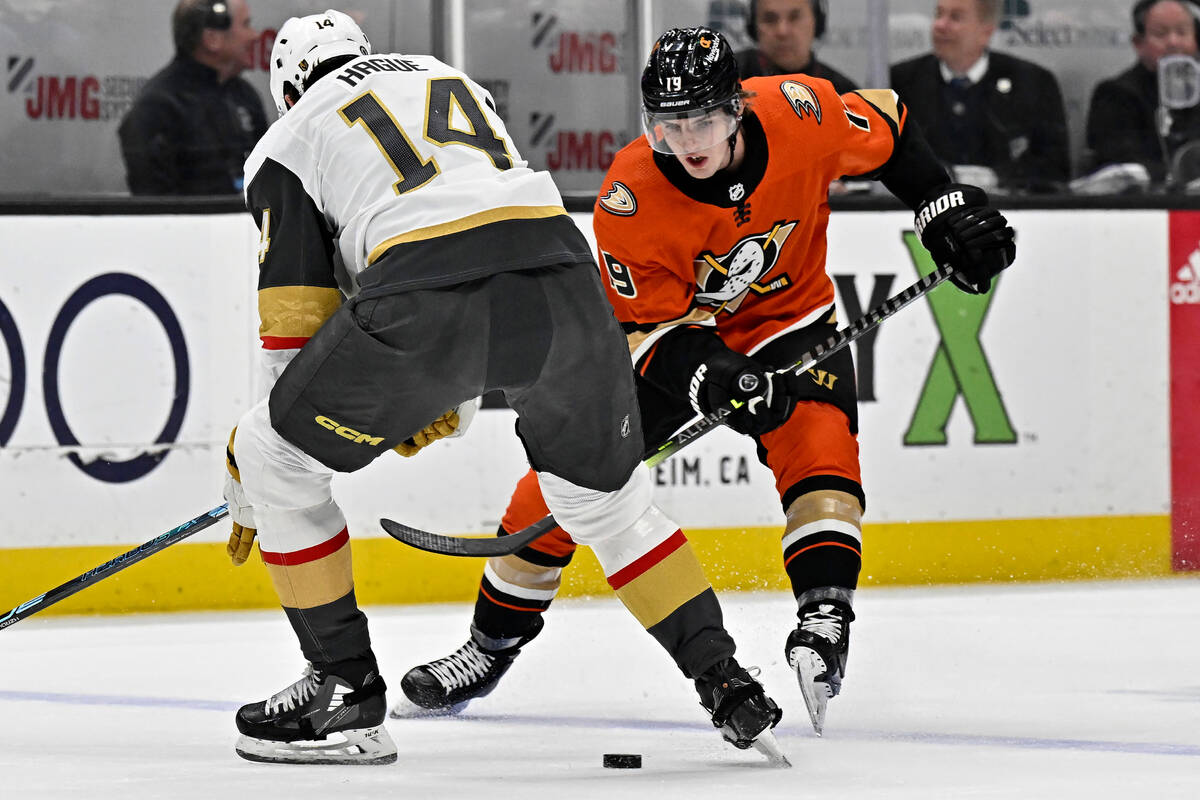 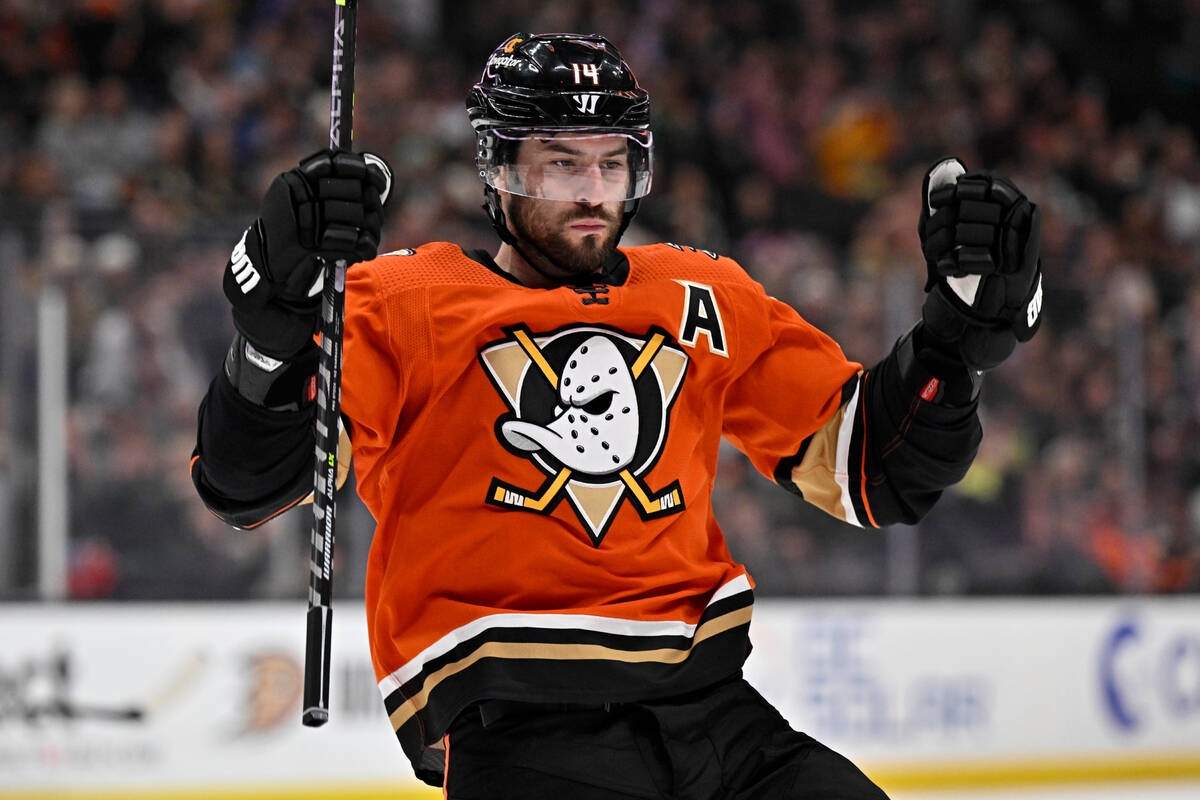 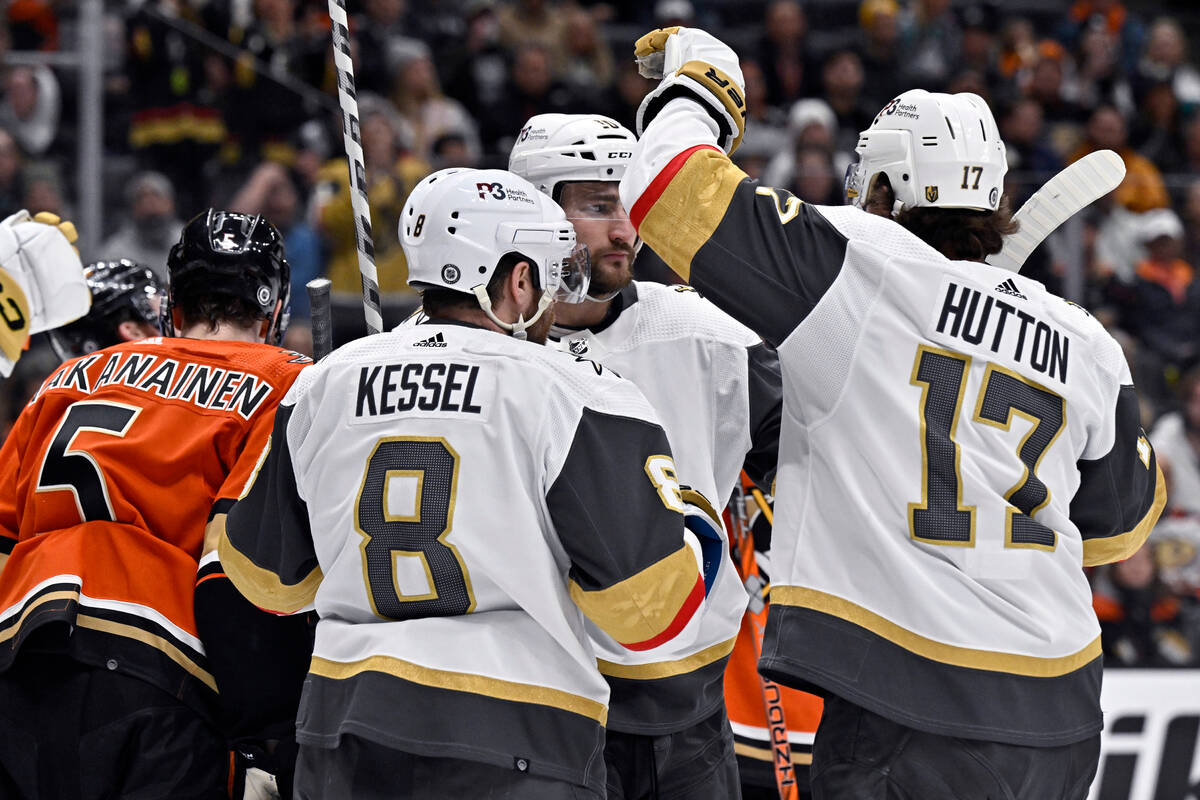 It was only fitting that John Gibson finished it off.

The Anaheim Ducks goaltender was spectacular all night Wednesday at Honda Center. He made 49 saves, including 14 on the penalty kill, to keep his team in its game with the Golden Knights.

He deserved the chance to seal a win in the shootout. And he did.

Gibson stopped left wing Reilly Smith and captain Mark Stone to cap his best performance of the season and deliver a 3-2 win for the Ducks.

The Knights dropped to 0-1-1 after the NHL’s three-day holiday break after losing 4-2 in Los Angeles on Tuesday. They matched their season high with 51 shots on goal, but their short-handed lineup didn’t get enough past Gibson to win.

“Those games are frustrating,” defenseman Alex Pietrangelo said. “You feel like you did a lot, you just couldn’t find a way to score.”

The Ducks (10-22-4) got an impressive performance from their three-time All Star to win despite getting outshot and outchanced. The Knights (24-12-2), on the other hand, were chasing the game early because of their goaltending.

Adin Hill gave up two goals on five shots 7:34 into the first period. Coach Bruce Cassidy pulled him with the Knights down 2-0 and inserted rookie goaltender Logan Thompson, who played Tuesday.

Thompson played well, stopping all 22 shots he faced. He bought time for the Knights to come back after a short-handed goal from Stone with 6:45 left in the first period and defenseman Ben Hutton’s first goal of the season with 6:28 left in the second.

They were forced to hang on in overtime after Stone gave the Ducks a late power play with 1:47 remaining.

Center Trevor Zegras and right wing Troy Terry then scored in the shootout to give Anaheim only its third home win against the Knights in 13 games. The Ducks, who entered Wednesday tied for the second-fewest points in the NHL, won for the first time in four games.

“I don’t think we’ve fared too well against them in the last few years, so it’s nice to get a win,” said Gibson, who improved to 4-15-5 against the Knights.

Hill was removed from the net after giving up a goal on a Henrique slap shot from 44 feet away. It was the first time the Knights made a midgame goaltending change this season.

“When you play back-to-back, we’re always going to play two goalies, typically,” Cassidy said. “Should be the most prepared guy on the team because he didn’t play the night before. That’s not what I saw, so we went a different direction.”

Hill has struggled the past two months with a 4-3-1 record and 27 goals allowed in nine appearances. The Knights’ goaltending as a whole has also slipped after a strong start.

They had a .913 team save percentage through two months, the seventh-best mark in the NHL. They were at .894, 22nd-best in the league, entering Wednesday’s game.

The Knights’ red-hot power play had a rare off night, going 0-for-5 against Anaheim. It couldn’t even score despite getting a five-on-three for 1:51 of the first period.

The Knights still got a special-teams goal. Stone scored the team’s NHL-leading seventh short-handed goal with 6:45 left in the first period.

Stone has two of those goals. Left wing Reilly Smith is first in the league with four, and center Chandler Stephenson has one.

Pietrangelo set a career high and franchise record by playing 34:16.

No one came close to his workload on the Knights. Center Chandler Stephenson was second in ice time at 23:46.

Pietrangelo played a lot on both special teams with the Knights down three of their regular defensemen. He played 5:53 on the power play and 7:23 on the penalty kill. He and defenseman Brayden McNabb combined for 14:08 of ice time short-handed. The rest of the blue line played 4:57 on the penalty kill.

“We have to dig in there on the penalty kill, stay as long as we could,” Pietrangelo said. “Luckily, our schedule is a little bit easier this month, and we have an opportunity to do that.”