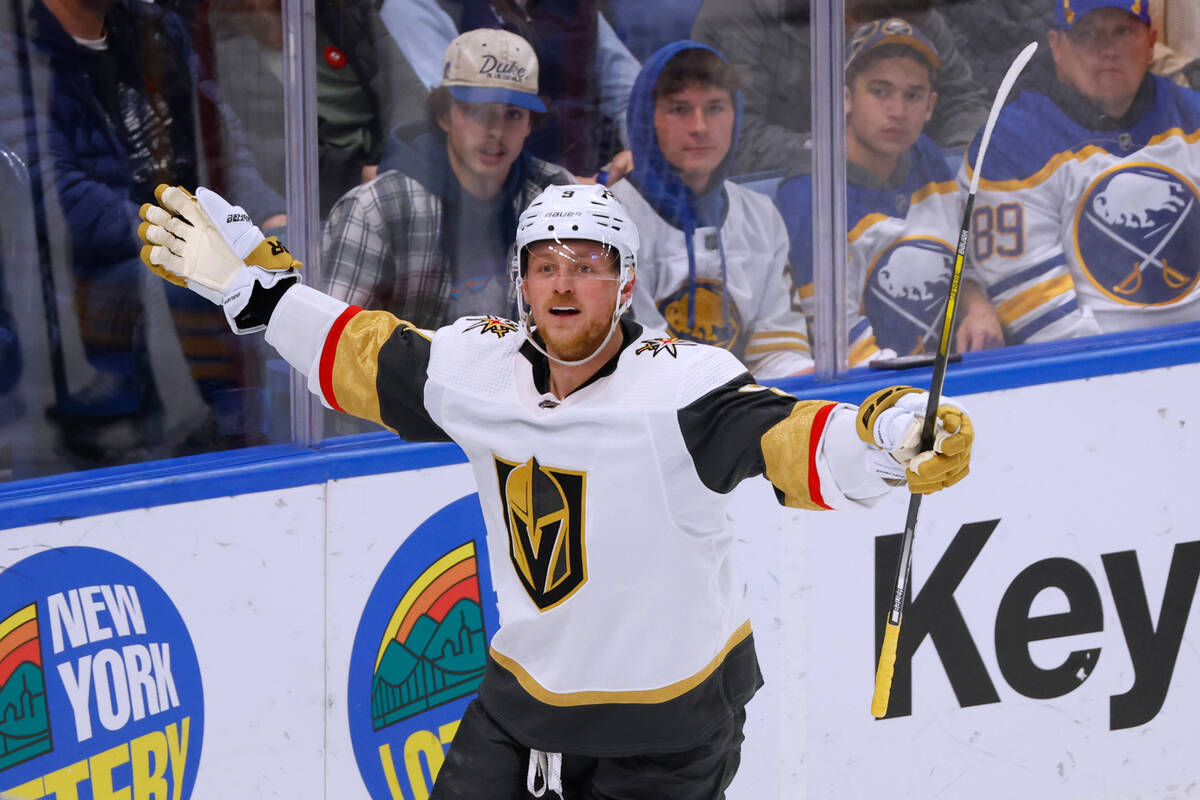 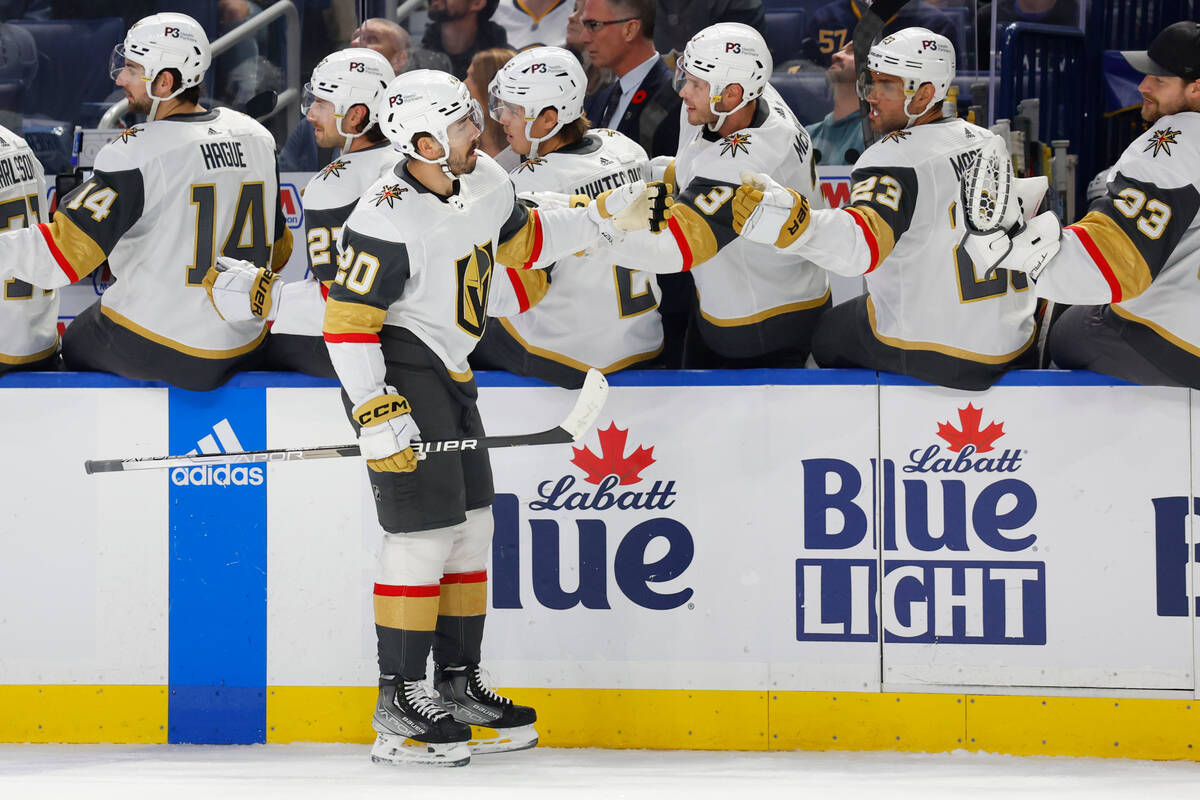 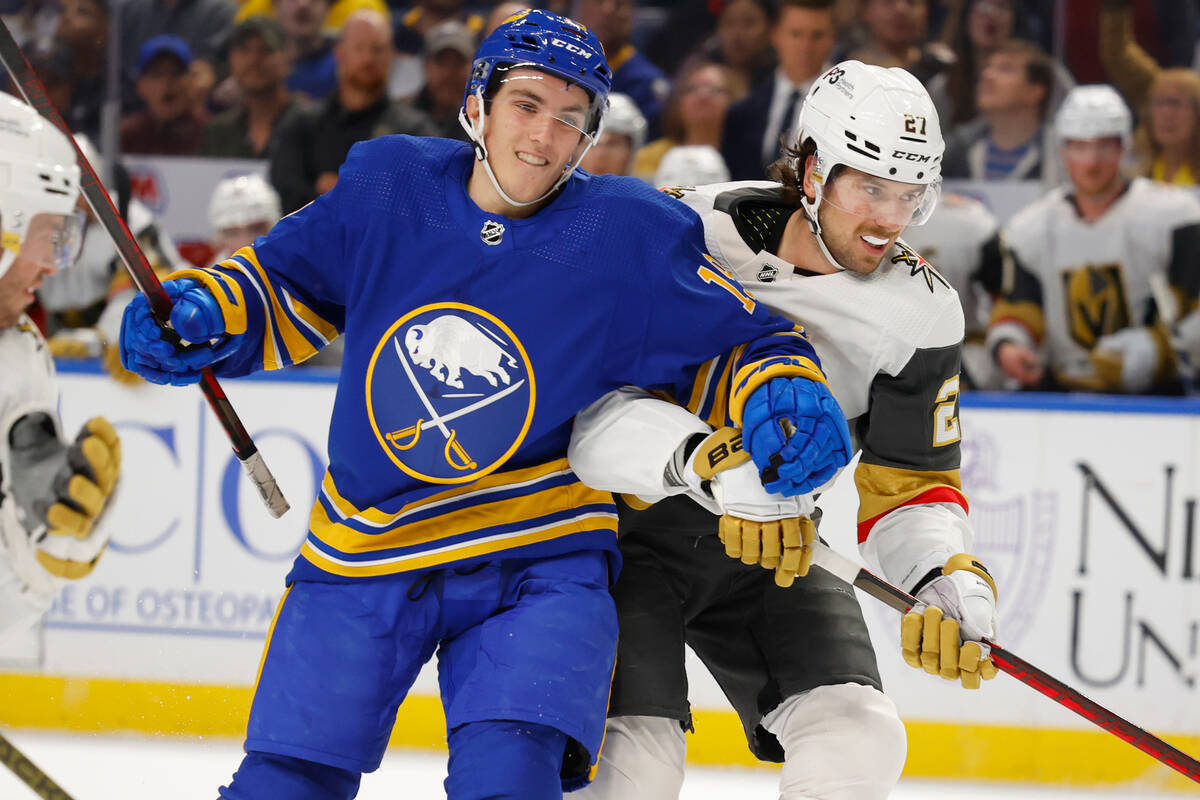 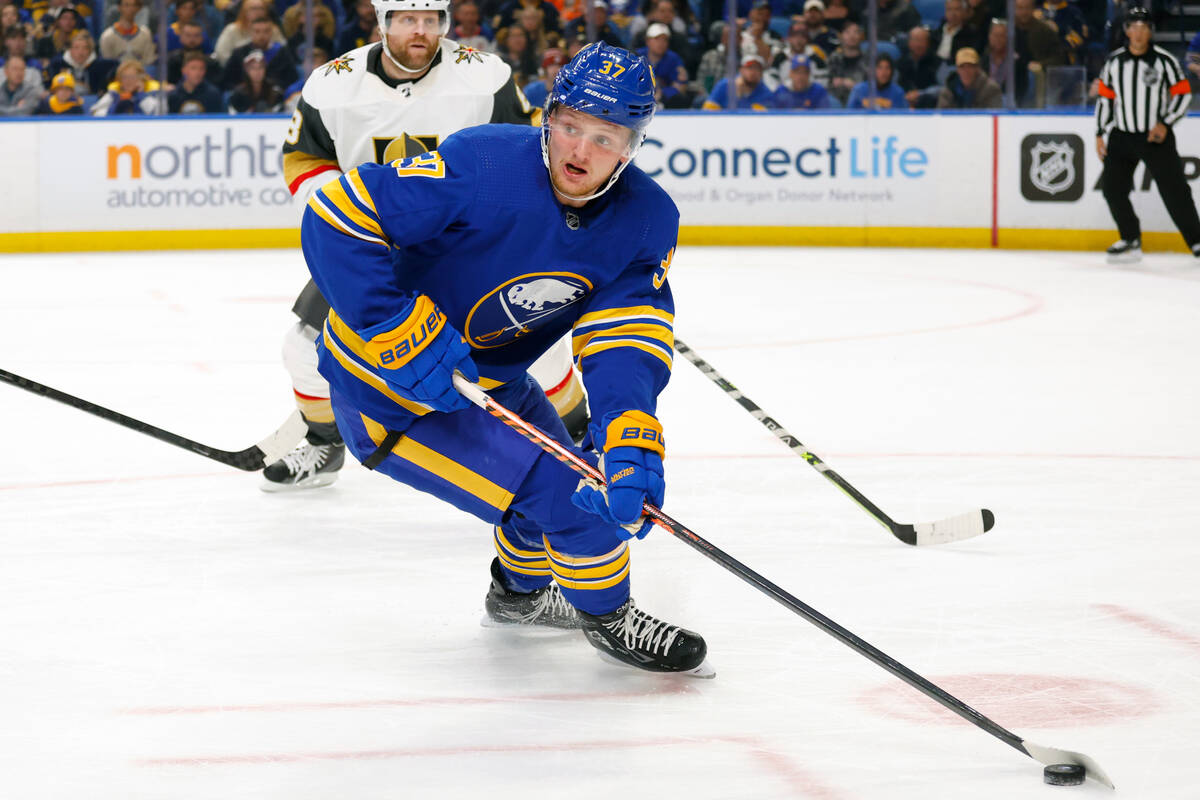 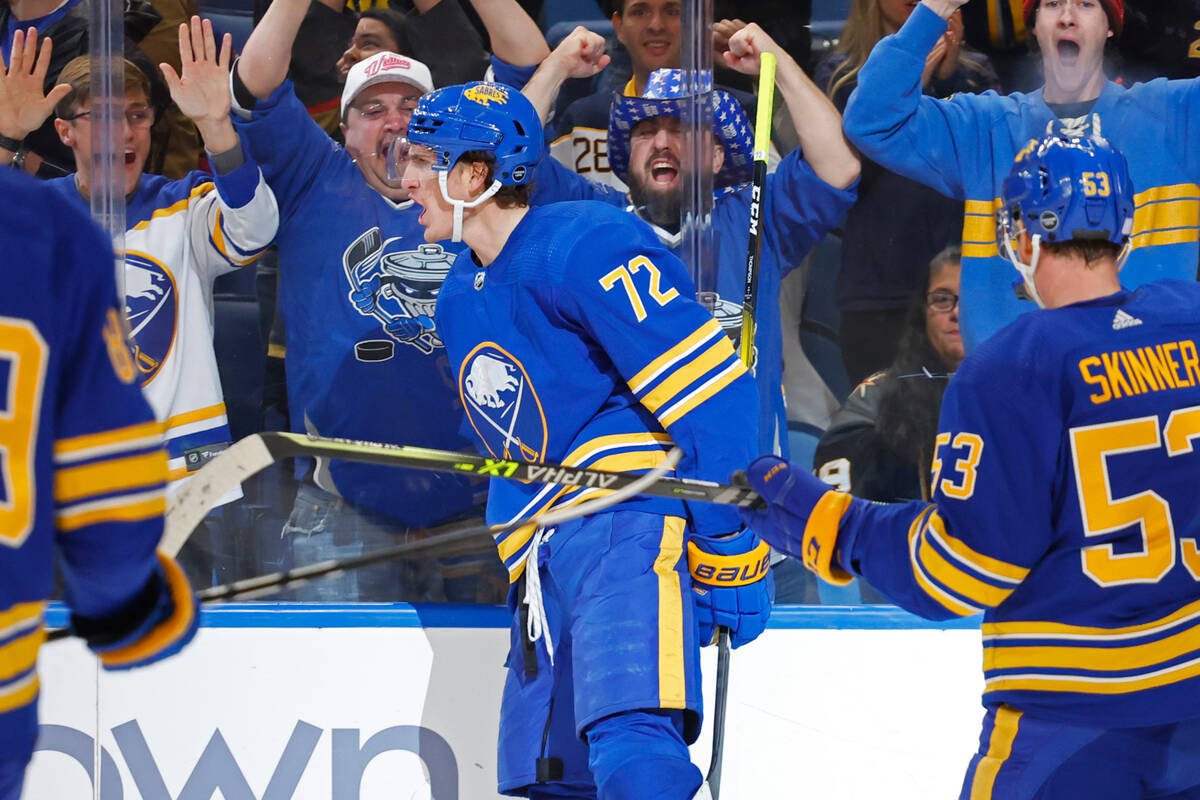 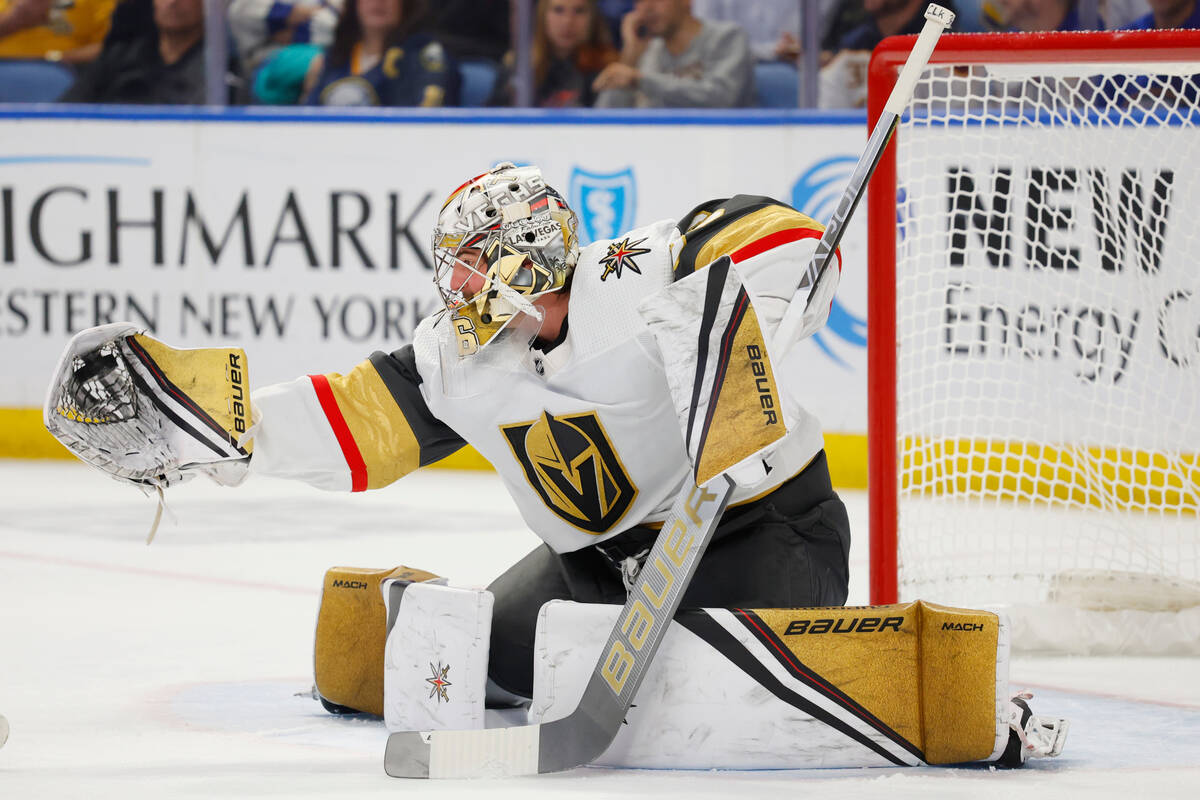 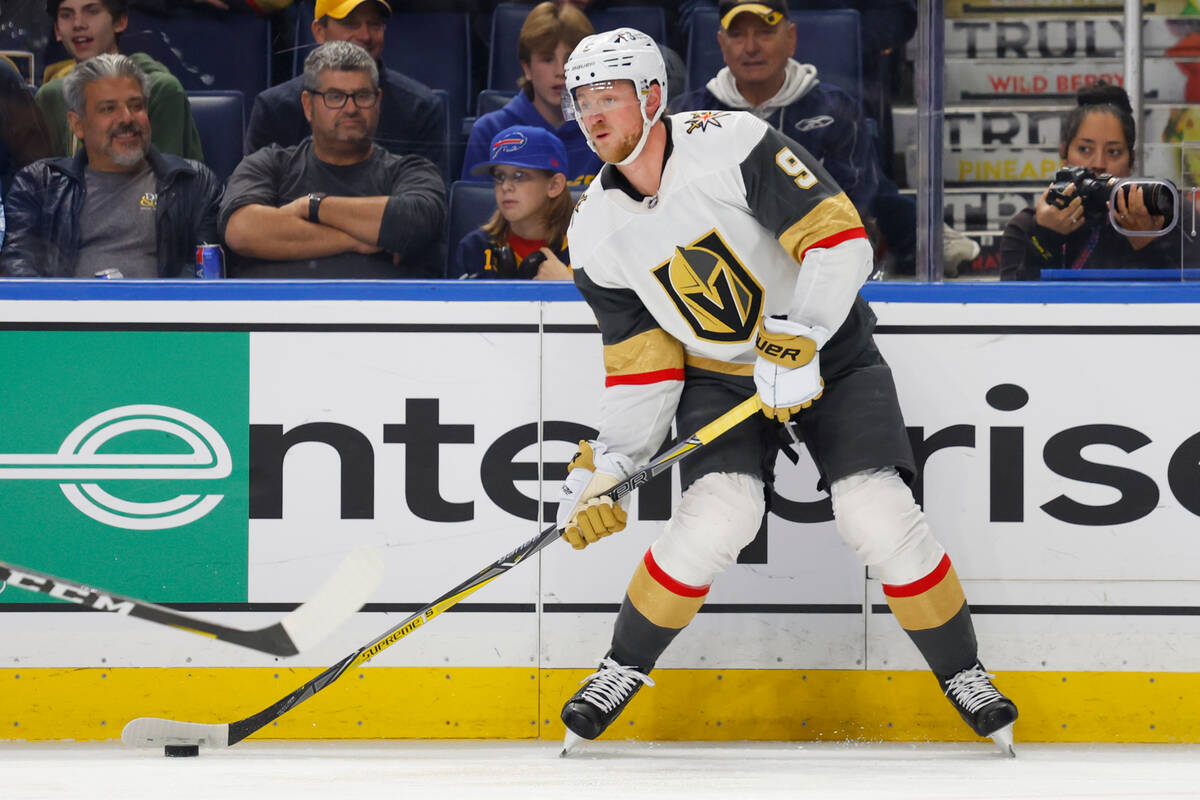 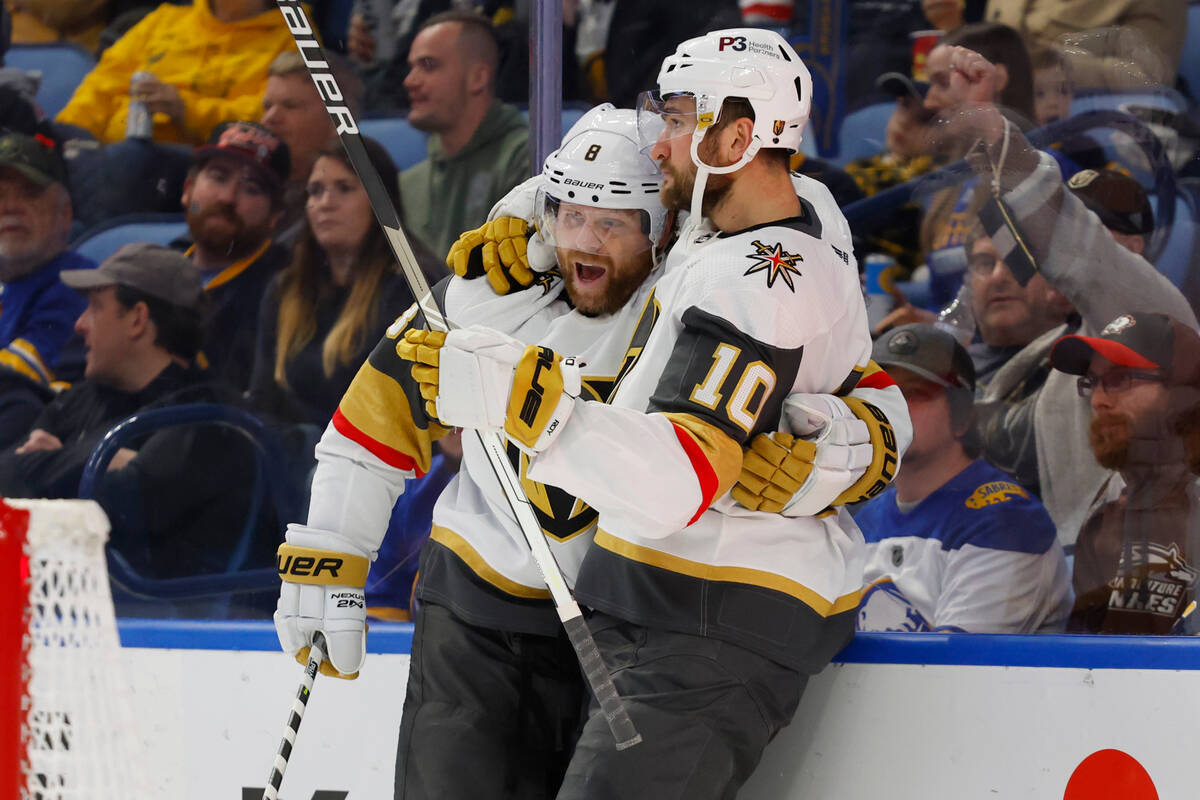 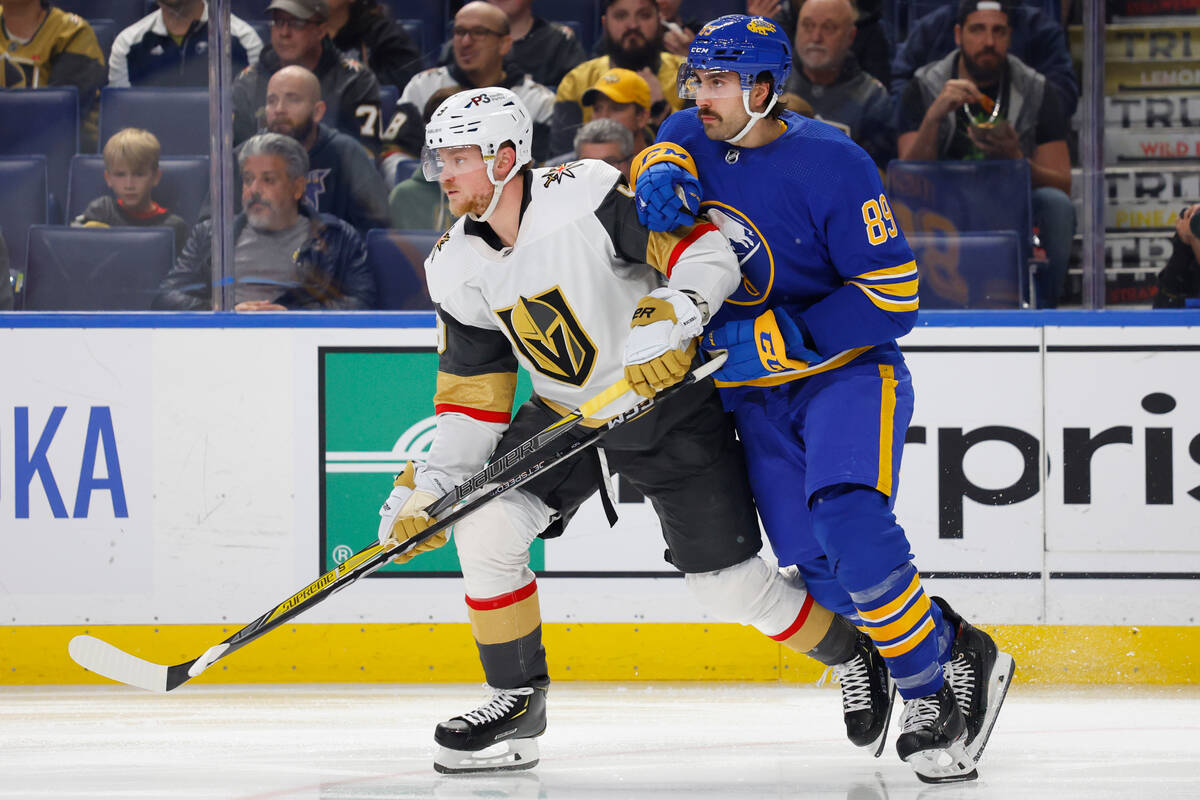 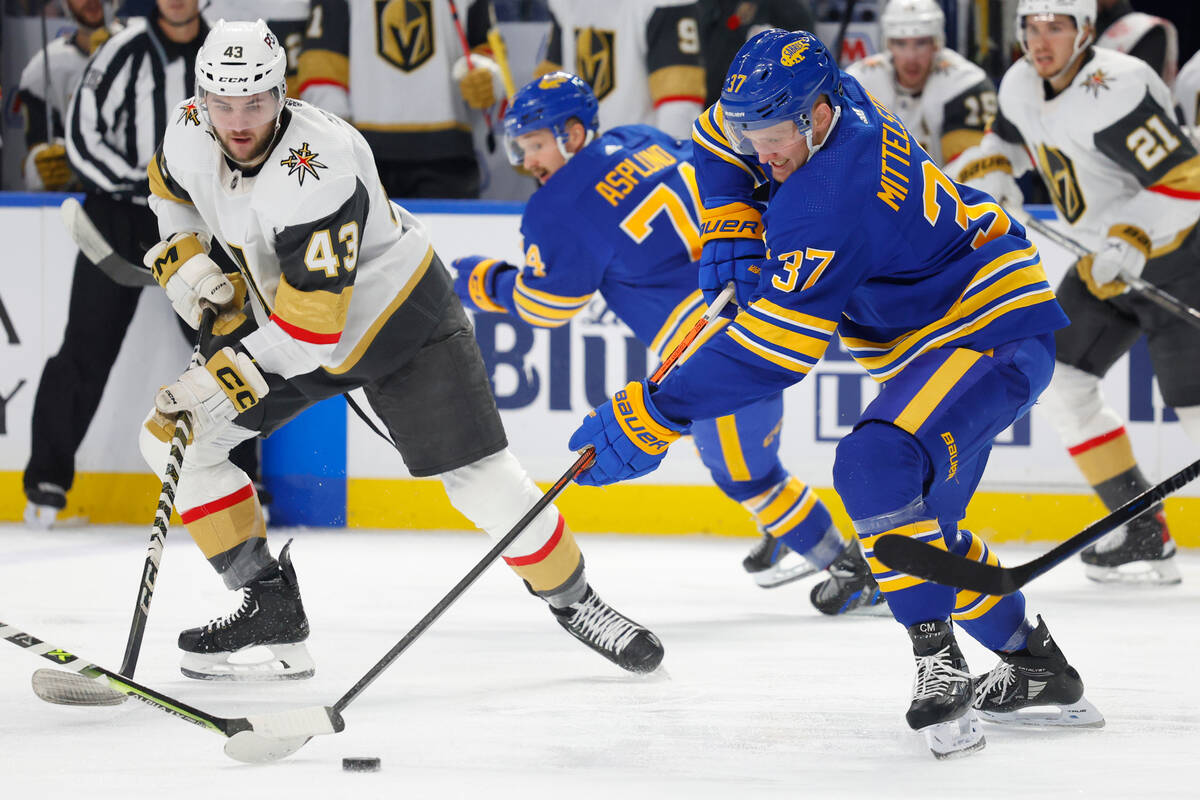 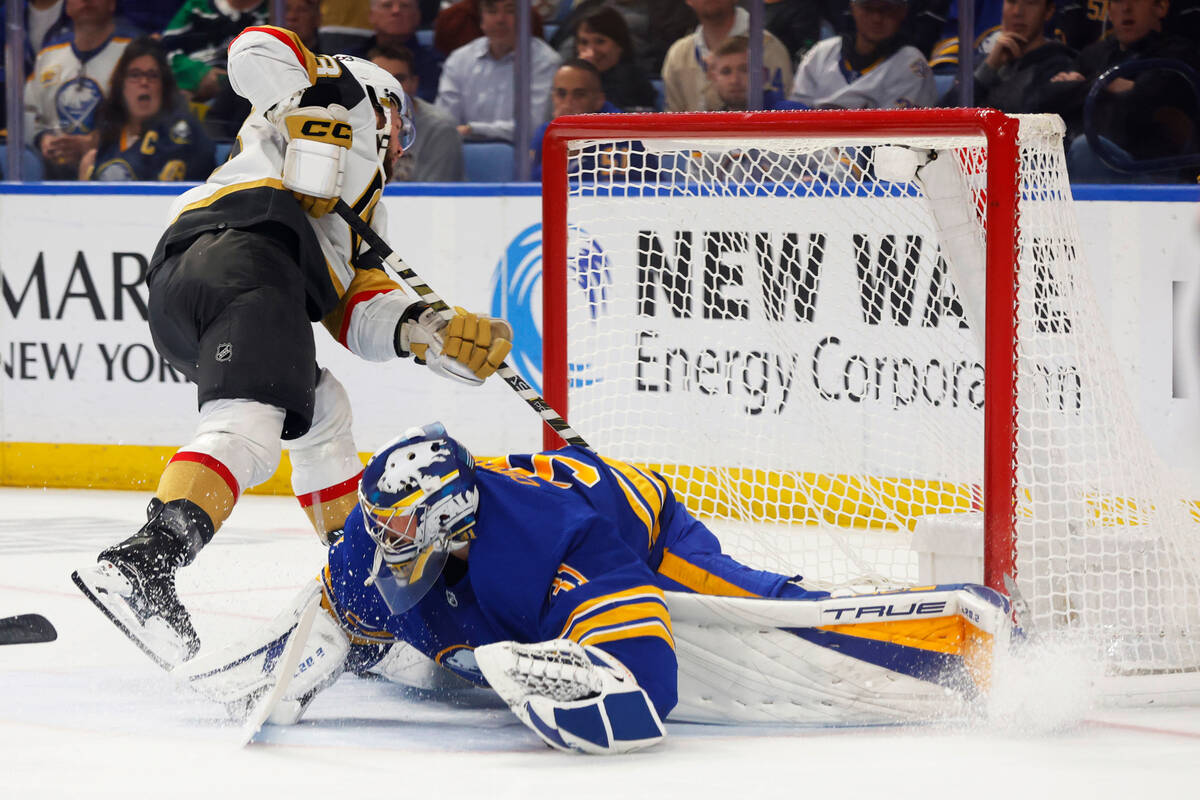 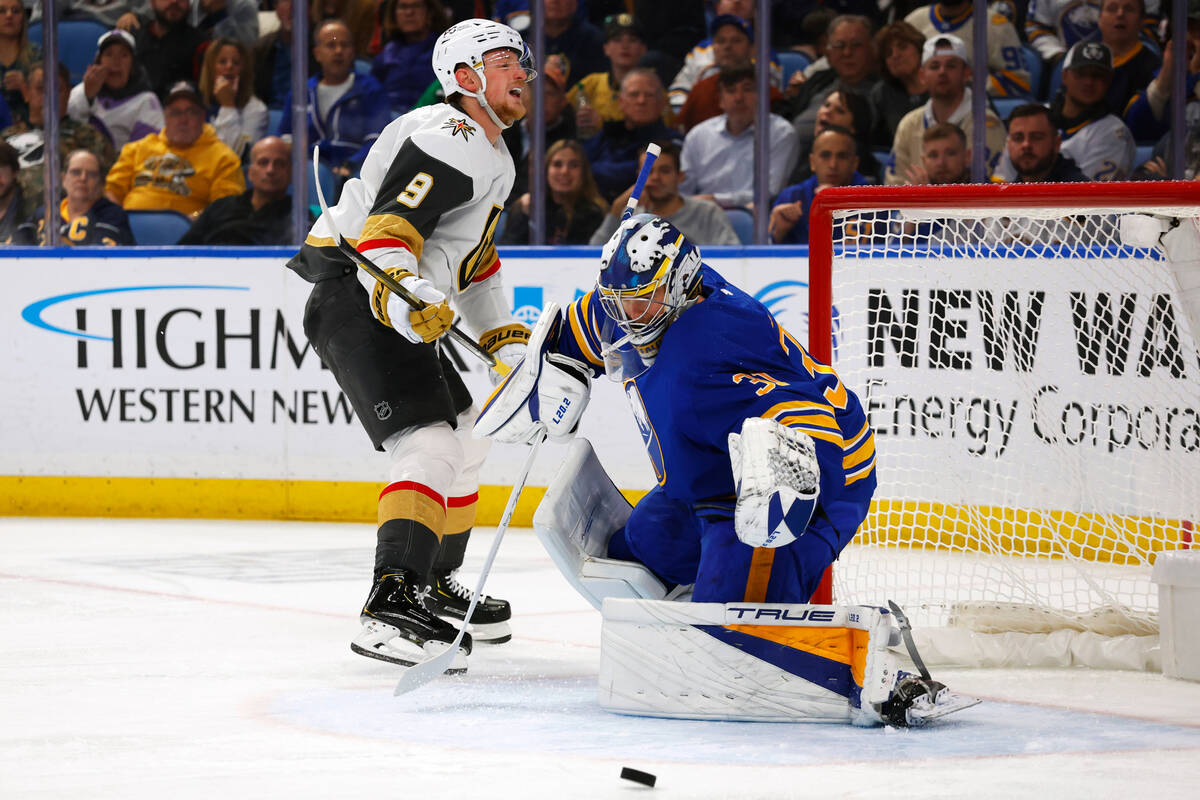 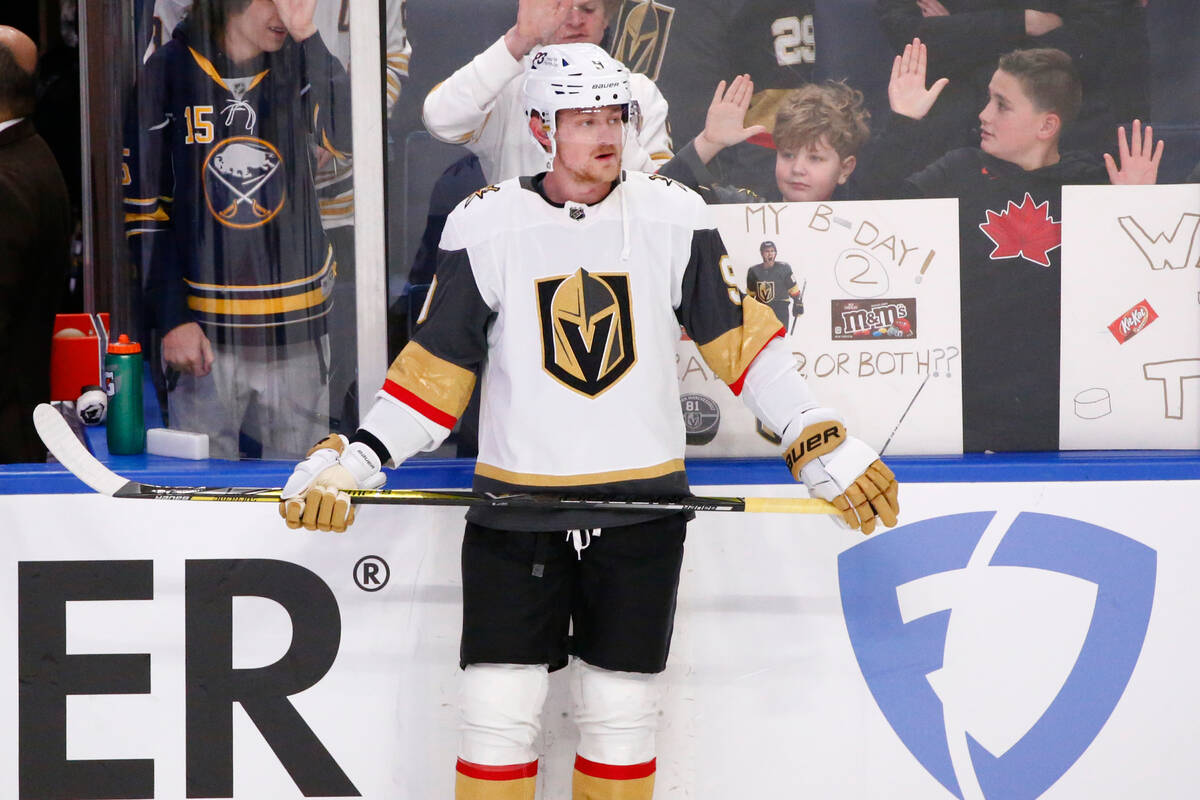 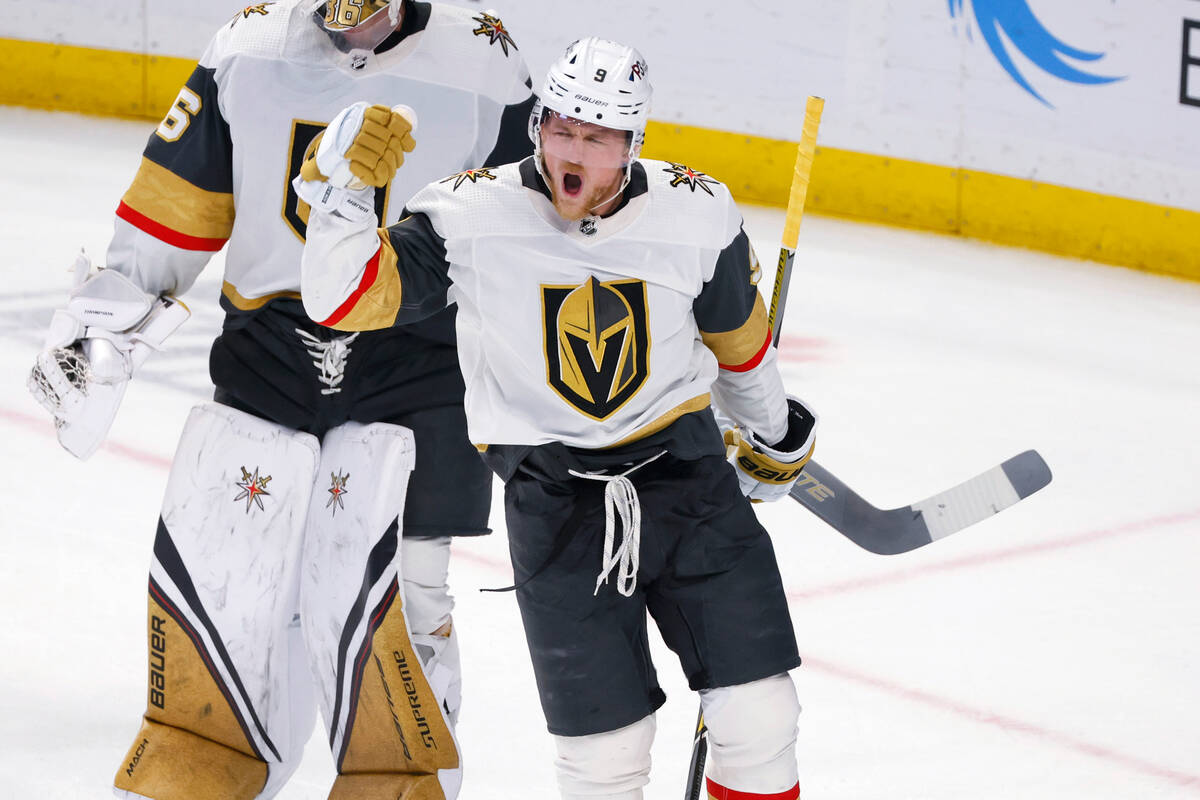 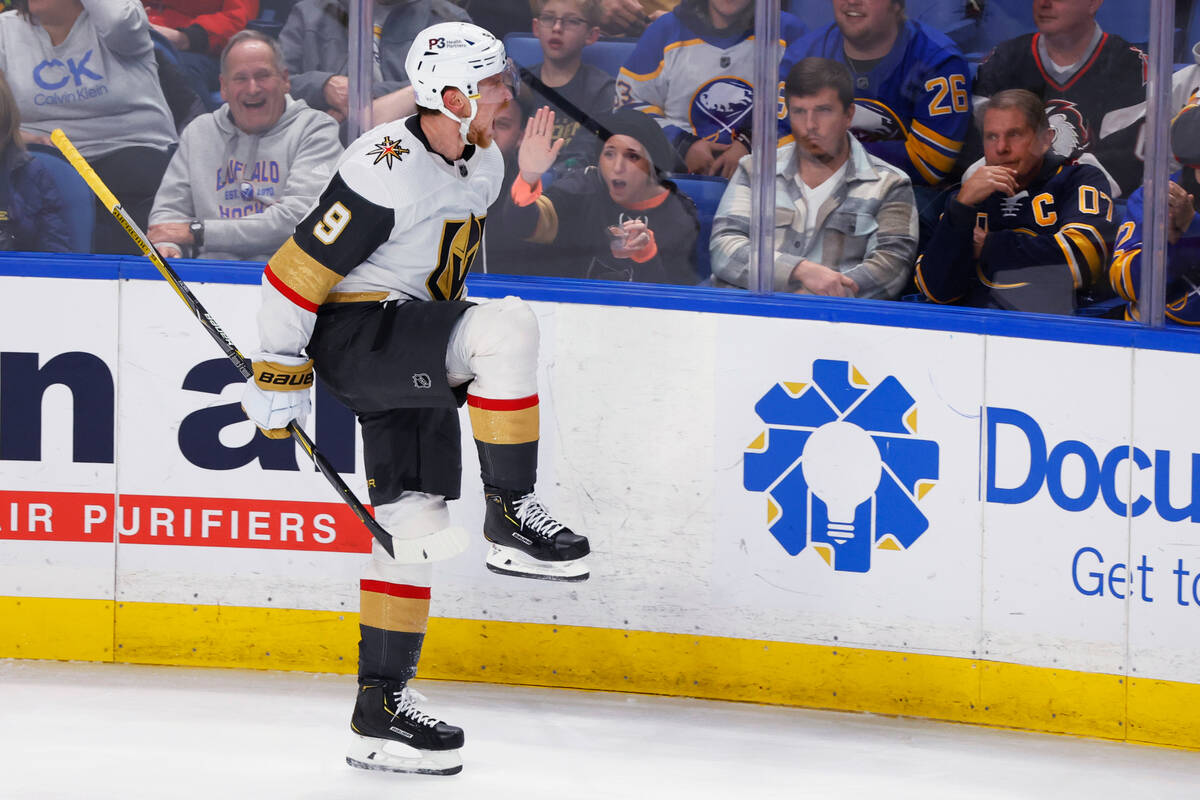 Jack Eichel spread his arms wide, raised them up and stared into the KeyBank Center crowd.

The Buffalo Sabres fans there cheered him on for six seasons. They’d booed him for two games. He got a chance to respond Thursday, and he made sure to savor it after scoring for the first time.

Eichel’s glare was only the beginning. The 26-year-old center, despite missing two breakaways, recorded a hat trick in his second meeting against his former team to help the Golden Knights wrap up a 5-0 road trip with a 7-4 win.

The Knights have won nine straight, one off the franchise record set from April 9 to 28, 2021.

Eichel has been instrumental to that success. His four-point night, a season high, gives him a team-leading 19 points through 15 games. He’s been everything the Knights could have asked for after acquiring him from Buffalo on Nov. 4, 2021.

Eichel made sure to put that on full display in front of Sabres fans.

“(The fans) were obviously on me all night,” Eichel said of his celebration. “It felt good to get one.”

Eichel’s night was the opposite of his last visit.

He was booed in his return to Buffalo on March 10, something he said Thursday morning surprised him. The Knights lost 3-1. Forwards Alex Tuch and Peyton Krebs, who went to the Sabres in the trade, scored. A defeated Eichel took a dig at the Buffalo fans afterward, saying “it only took seven years and me leaving for them to get into the game.”

Eichel seemed to hold onto that frustration eight months later. He couldn’t let it out in the first two periods Thursday, when his two breakaway attempts were stopped by goaltender Eric Comrie. So it all got released in 20 magical minutes.

First, he set up defenseman Alex Pietrangelo’s goal 3:52 into the third period that made the score 4-2. His teammates were so happy they mobbed him instead of Pietrangelo.

Eichel scored himself 2:21 later after collecting the rebound from a Pietrangelo shot. His celebration seemed cathartic, but he was just getting started.

Eichel scored again with 5:23 remaining off the rush to put the Knights up 6-3. He had a chance for his third hat trick and first with the Knights soon after on the power play, but hit the post. He got another look with the Sabres’ net empty, and his shot was blocked.

Eichel’s final chance came 176 feet away from goal with eight seconds left. This time he didn’t miss. He scored an empty-net goal for the ninth regular-season hat trick in Knights history and 12th overall.

Sabres fans know more than anyone that Eichel is a star. He reminded them anyway. He’s been the best player on the NHL’s best team, and he left no room for doubt Thursday.

“It’s an incredible game for him,” said captain Mark Stone, who called it one of the “coolest games” he’s been a part of. “It’s tough. You’re getting booed every shift. I don’t know. It says a lot about his character.”

Two other impressive performances were overshadowed by Eichel.

Left wing Chandler Stephenson had a goal and three assists for his second-ever four-point game. He’s second on the Knights in scoring with 15 points.

Pietrangelo, in addition to his goal, got the 399th and 400th assists of his career. His 13 points are tied for the sixth-most among defensemen.

The Knights also got contributions from their bottom six.

Center Nicolas Roy had two primary assists for his first multipoint game of the season. Roy became the ninth Knights player to reach 10 points. They’re the only NHL team with that many players in double figures.

“You need that if you’re going to win a lot of games in a row, which we have,” coach Bruce Cassidy said.

Right wing Phil Kessel also got his second goal in the win, and rookie left wing Paul Cotter, playing his first game since Oct. 18, scored on a breakaway in the second period.

The Knights’ power play and penalty kill finished the road trip trending in opposite directions.

Stephenson scored the Knights’ fifth power-play goal of the road trip in 14 opportunities 5:44 into the first period. The Knights, after allowing Buffalo to score twice on the man advantage in three tries, were only 8-for-12 on the penalty kill.