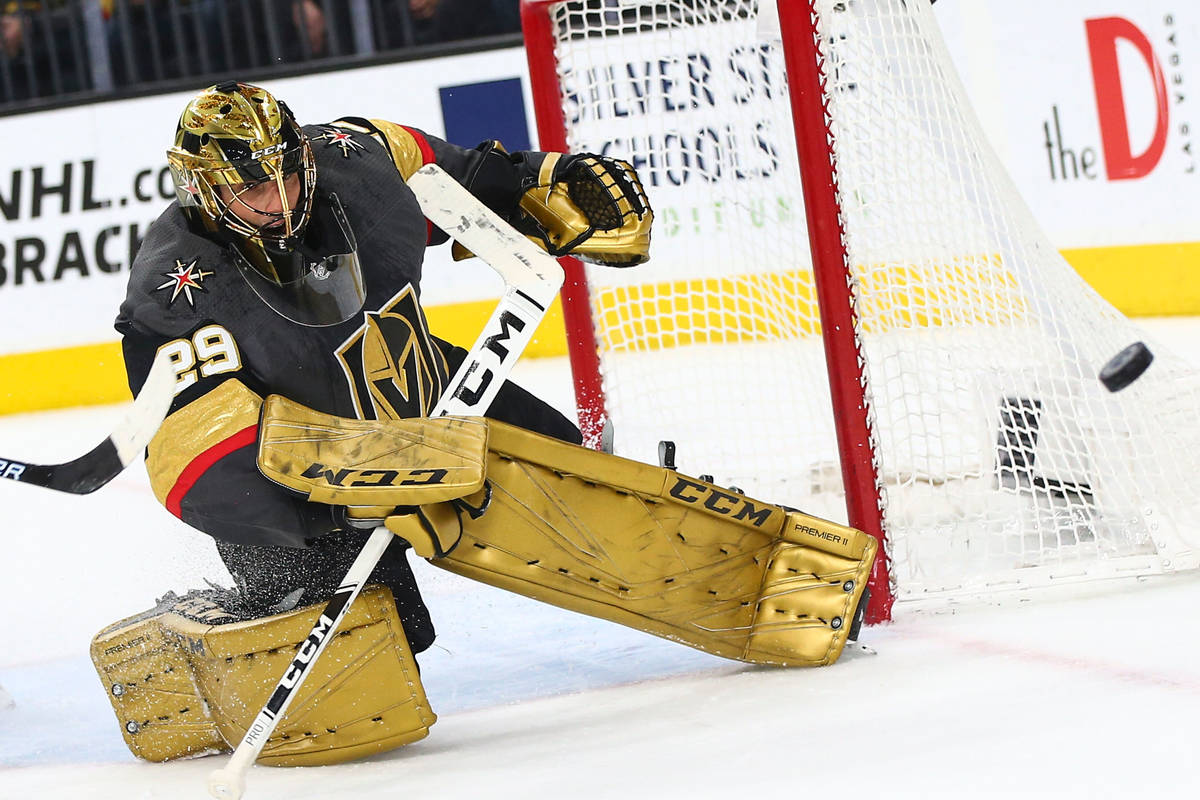 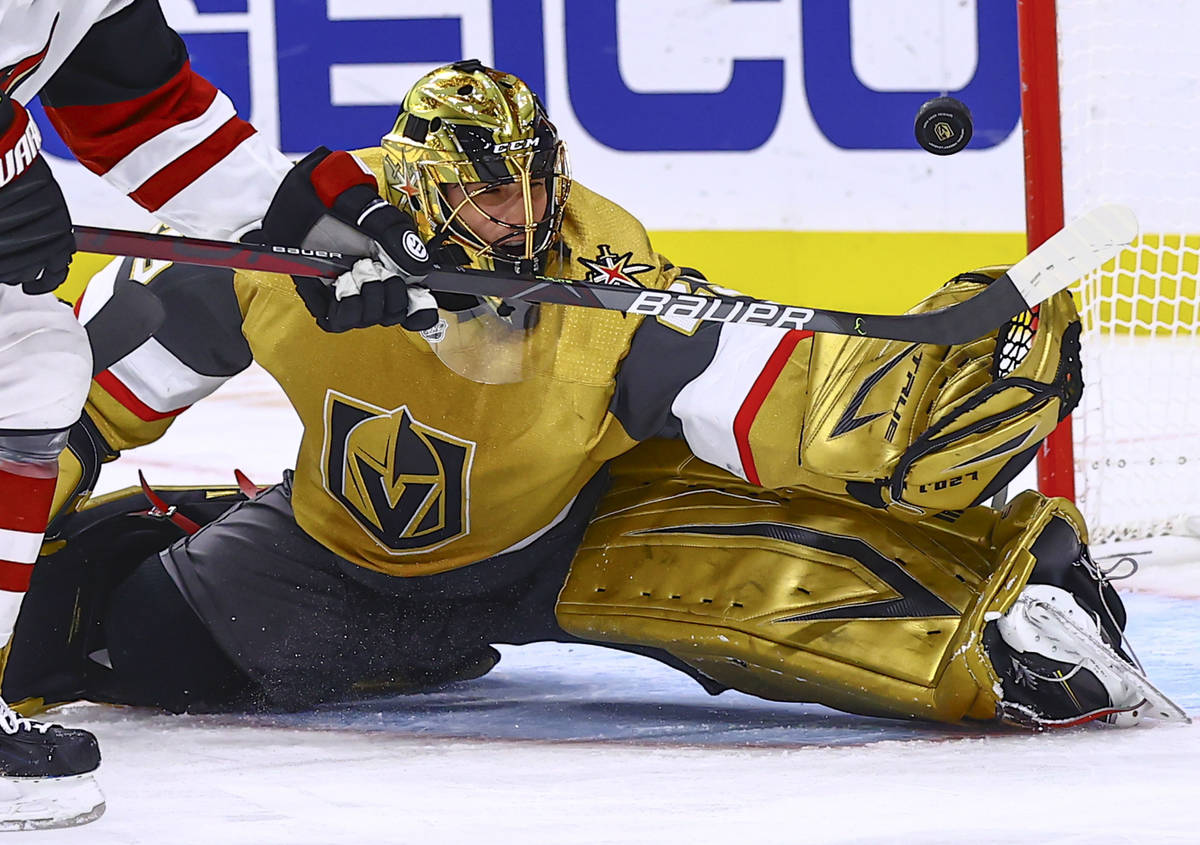 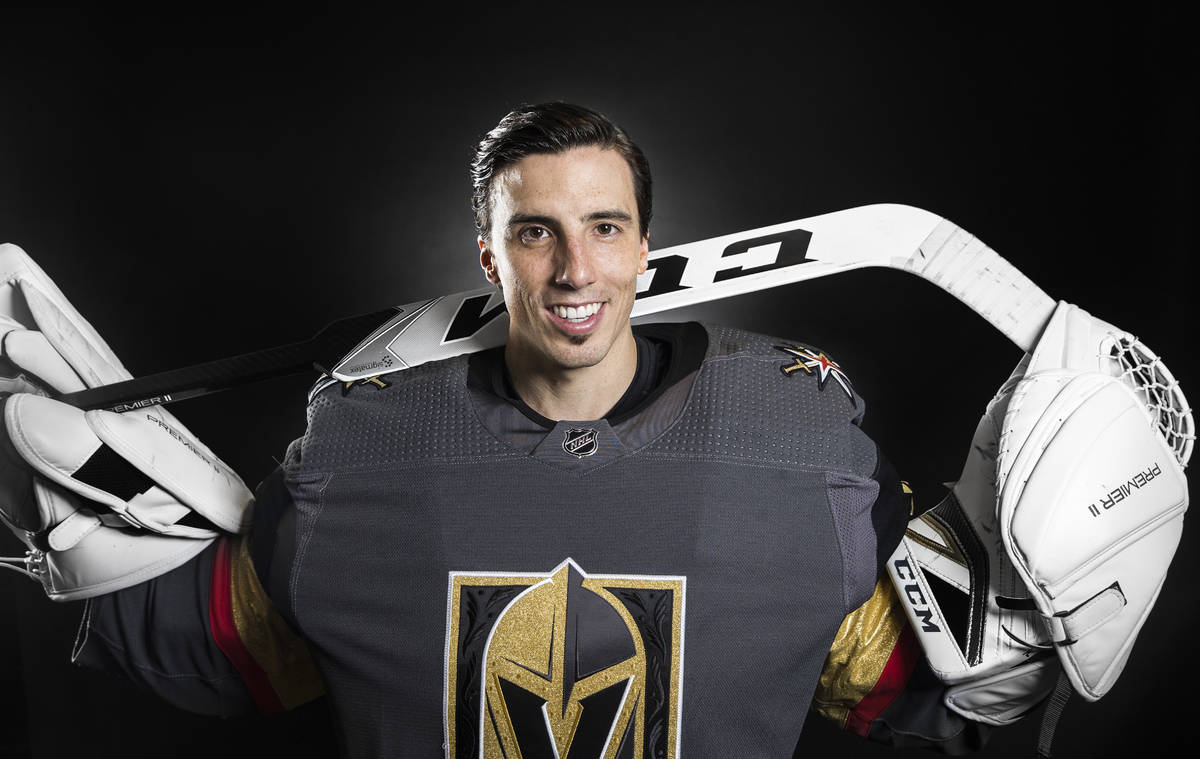 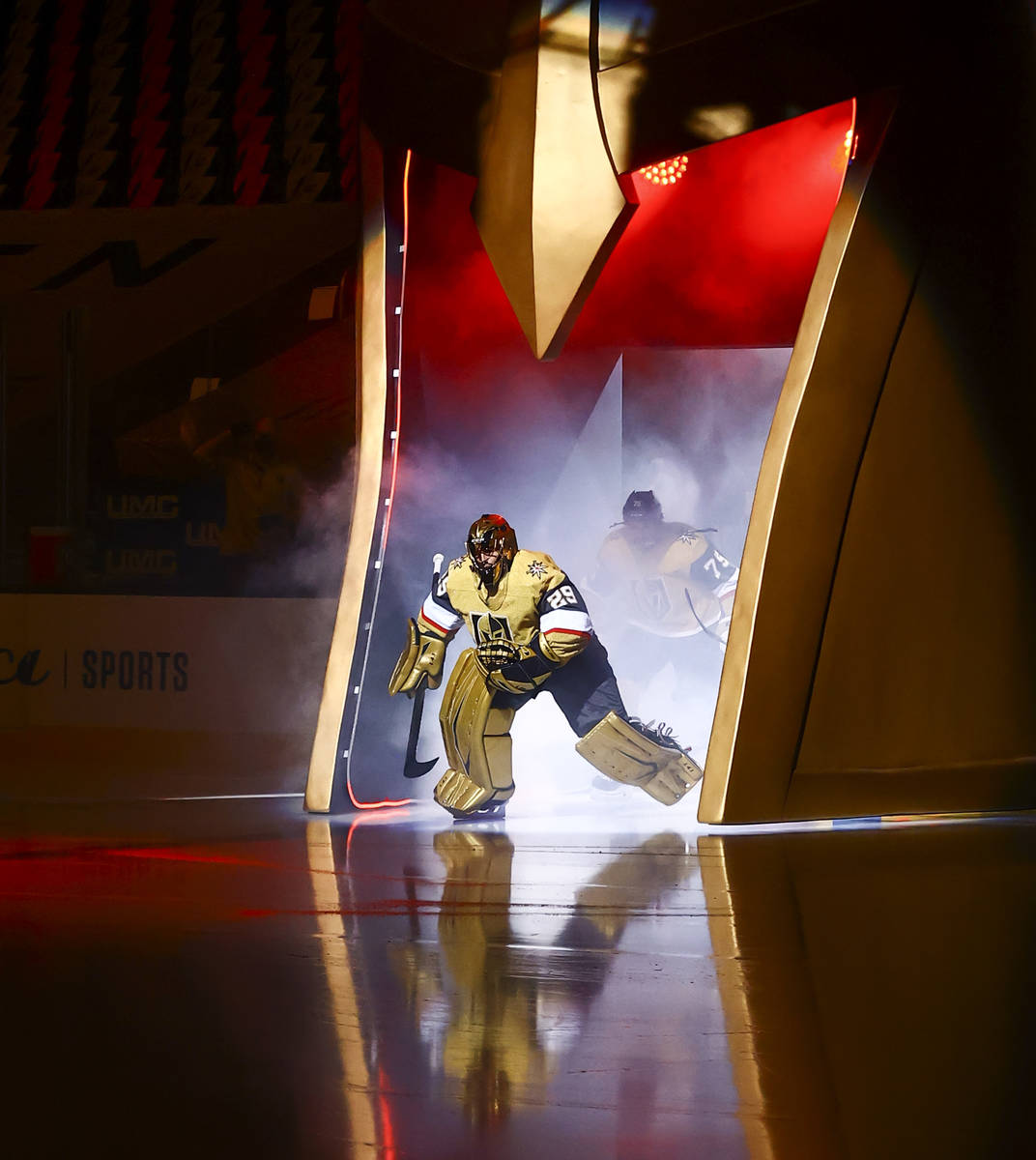 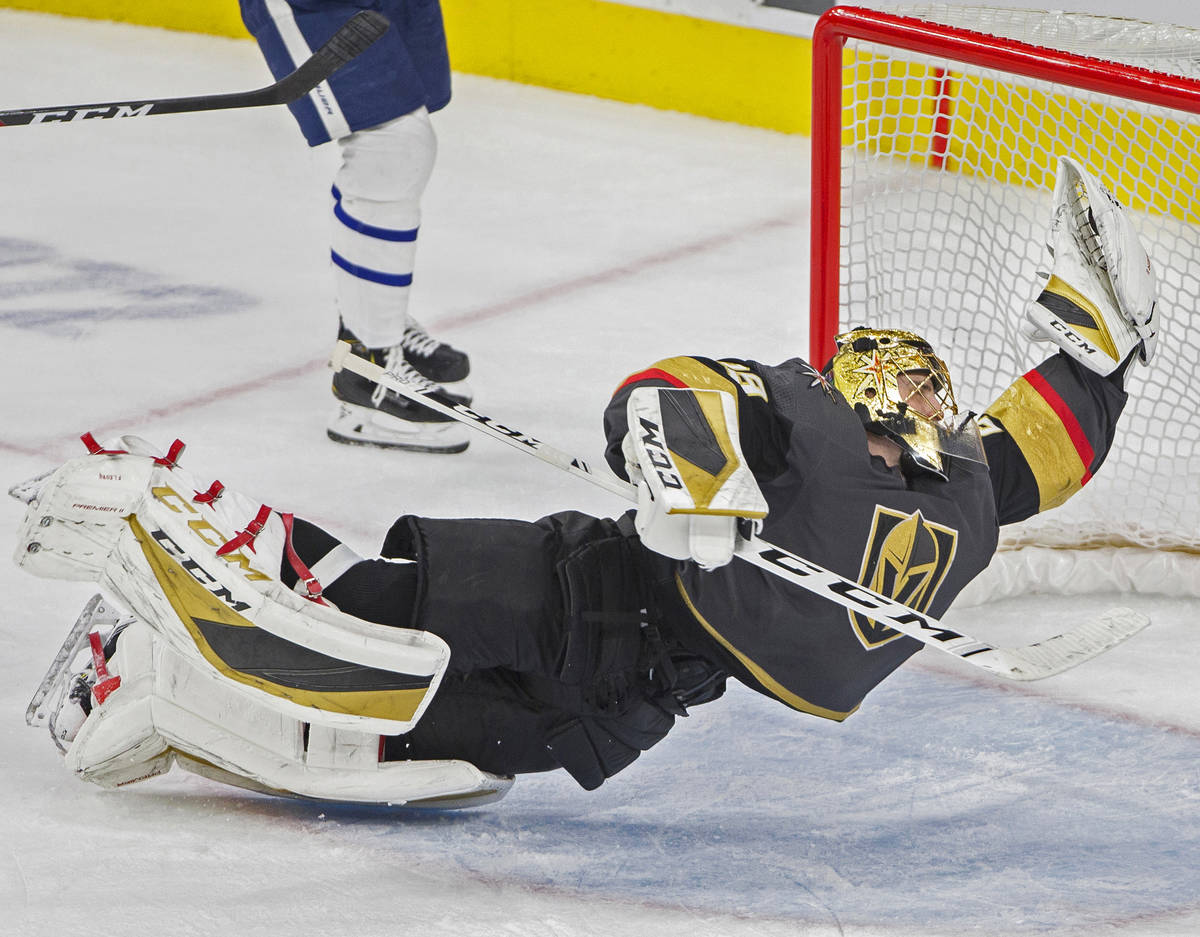 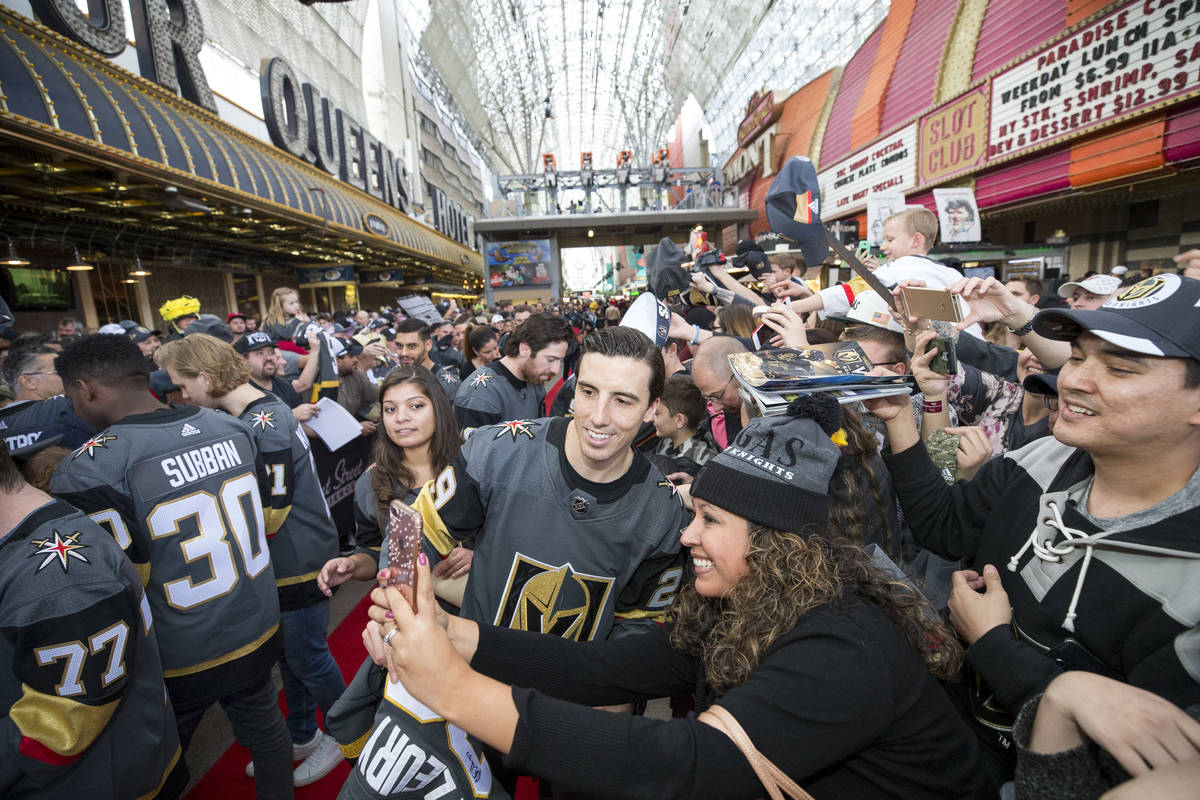 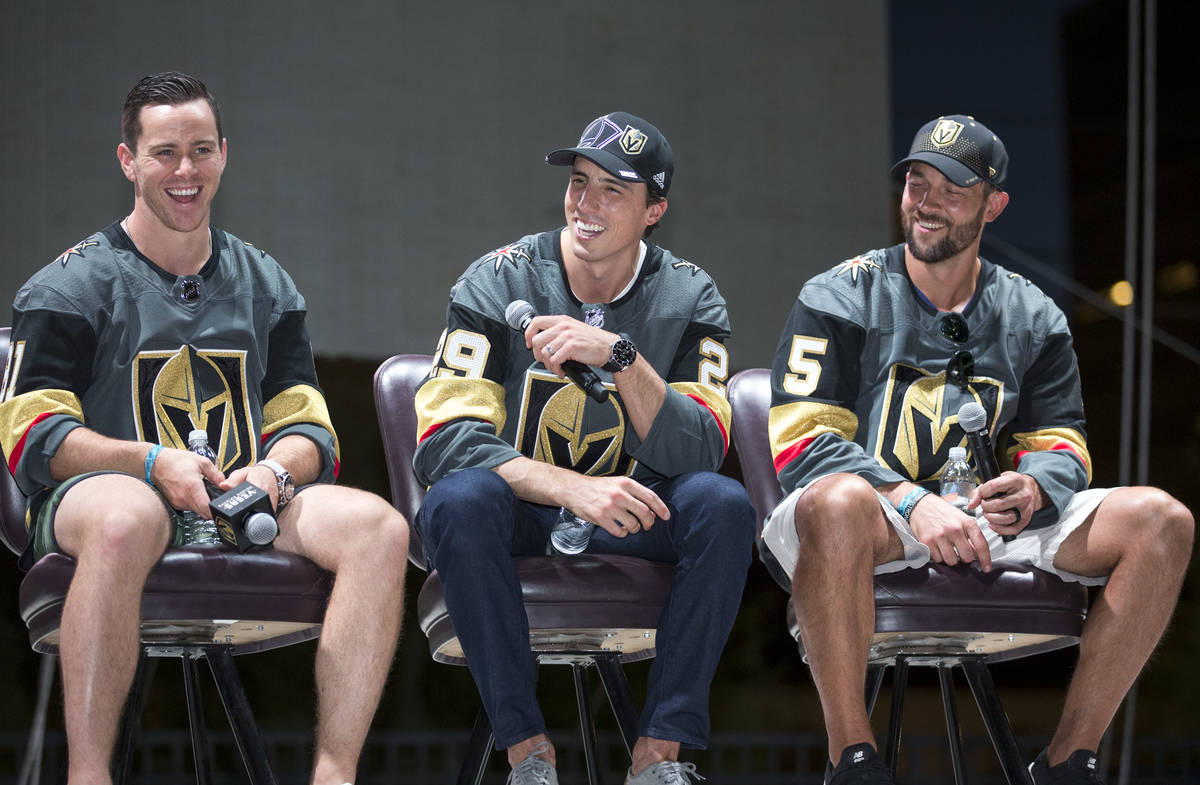 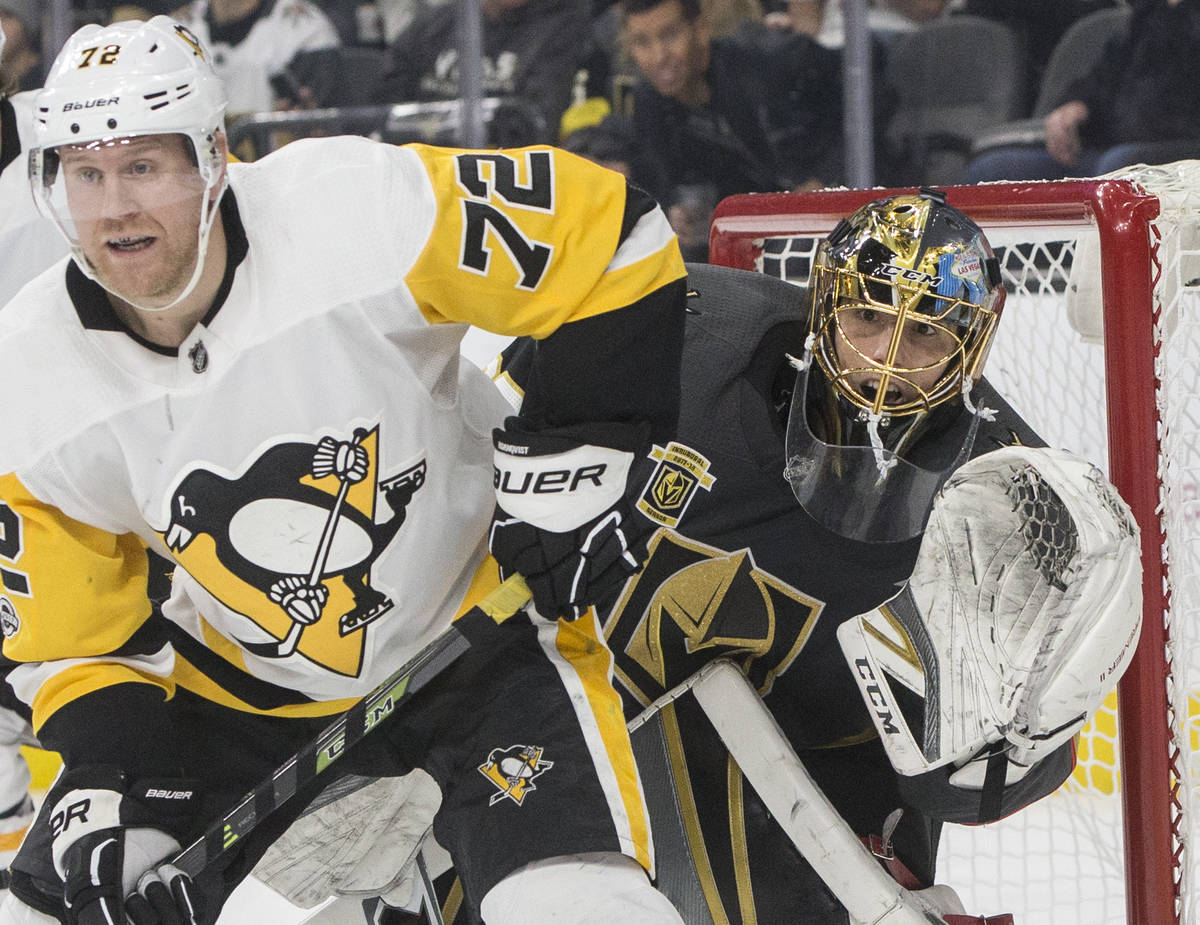 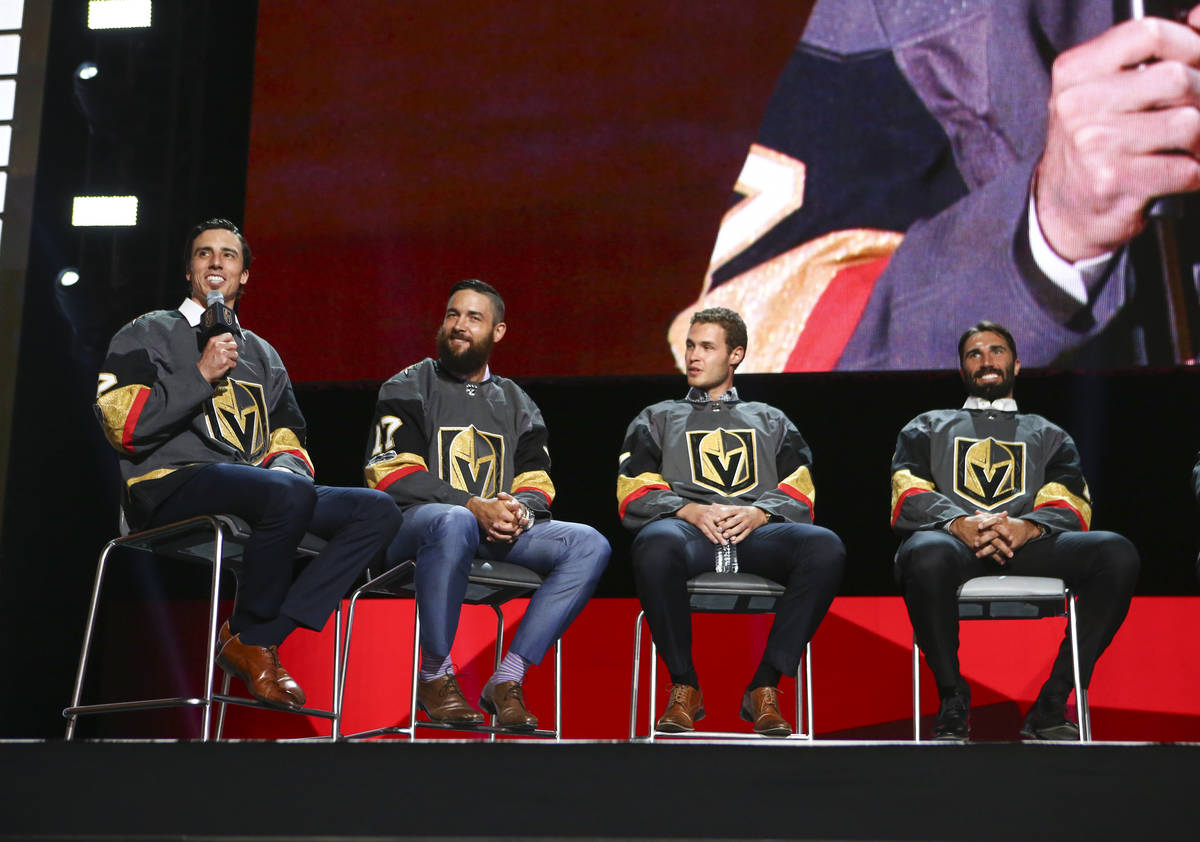 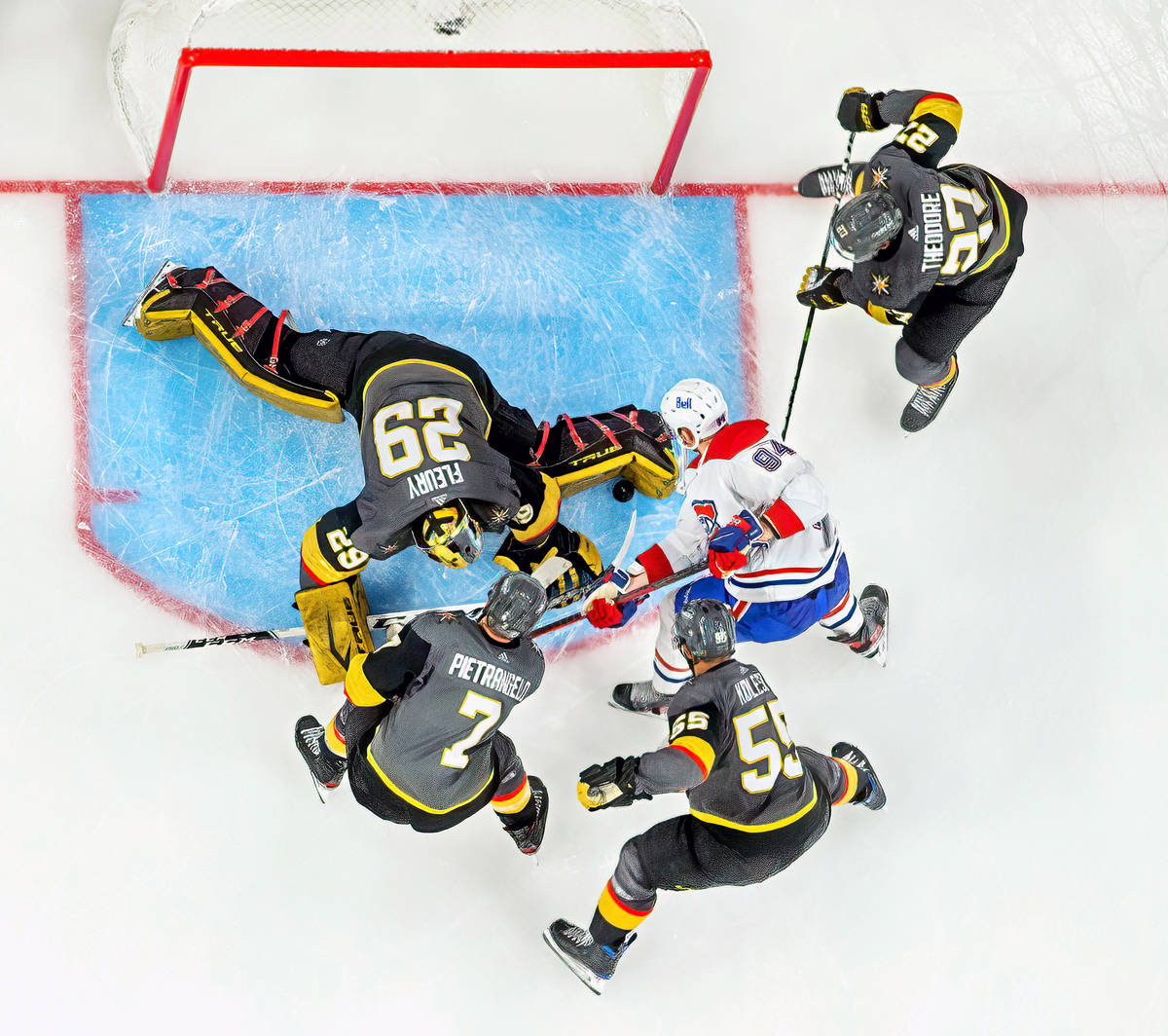 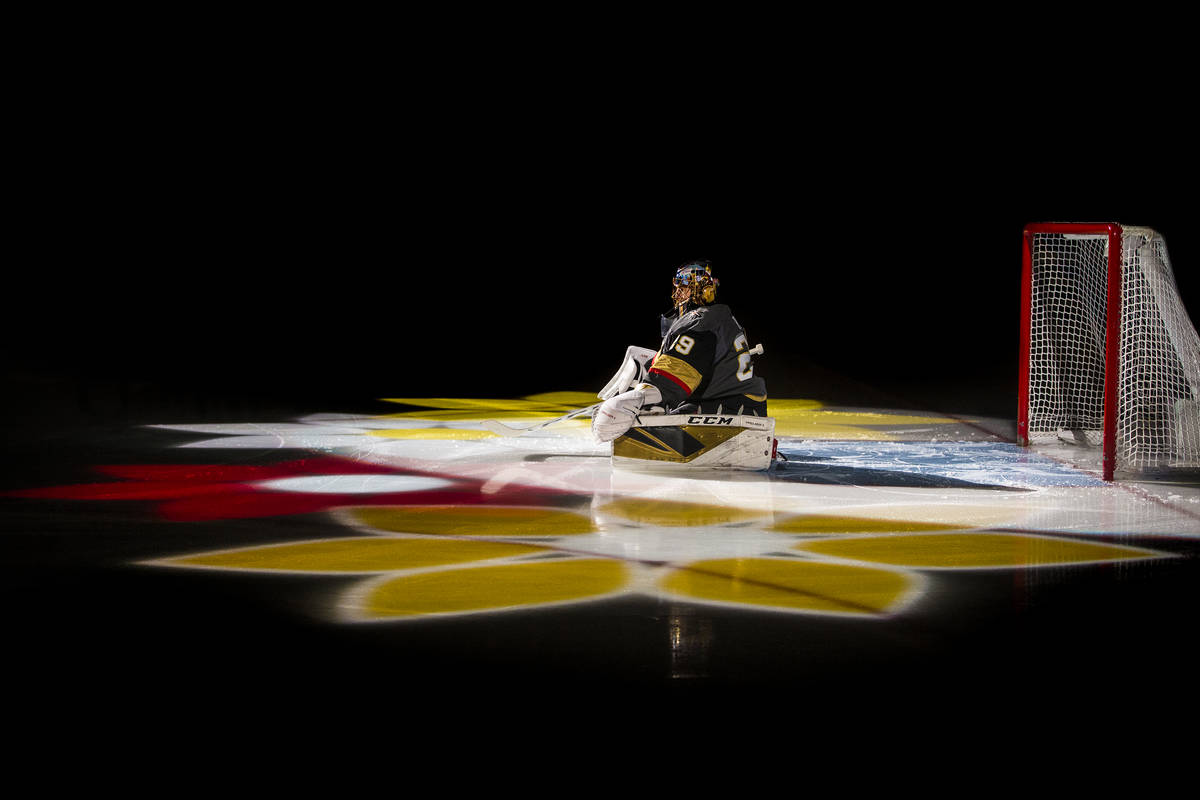 Golden Knights goaltender Marc-Andre Fleury (29) is announced before the start of an NHL hockey game with the Minnesota Wild on Tuesday, Dec. 17, 2019, at T-Mobile Arena, in Las Vegas. (Benjamin Hager/Las Vegas Review-Journal) @benjaminhphoto 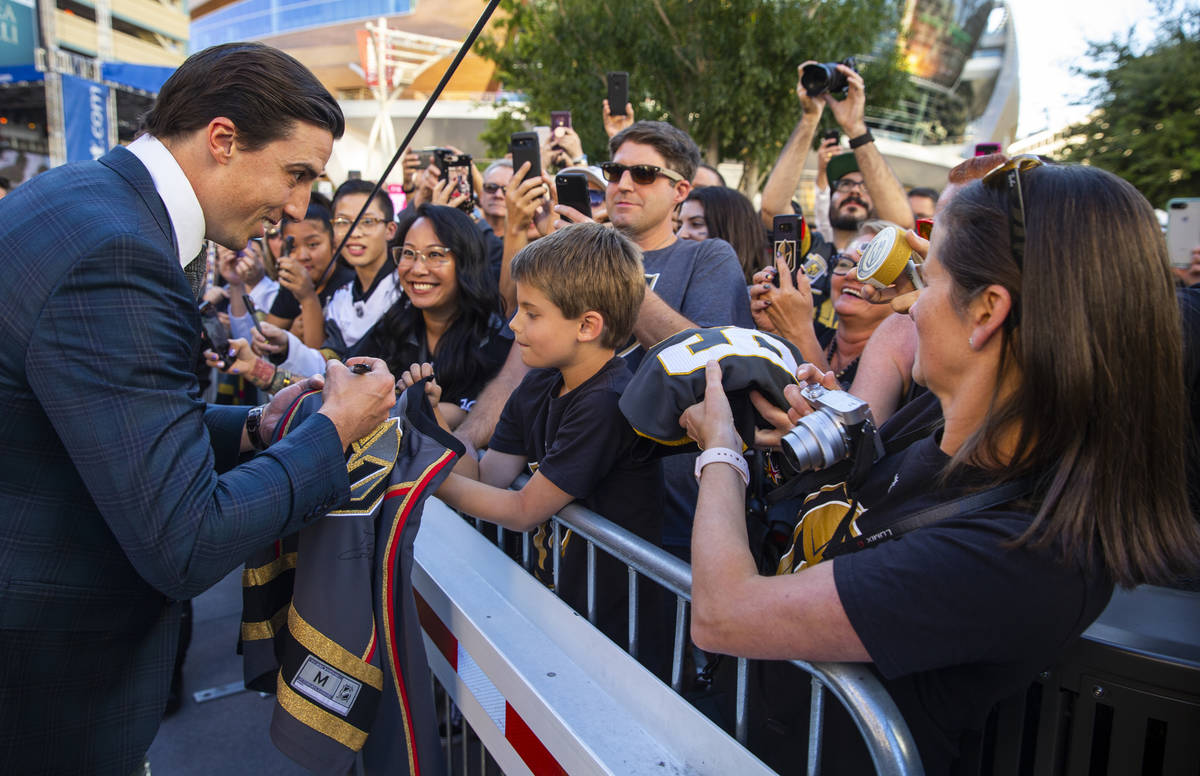 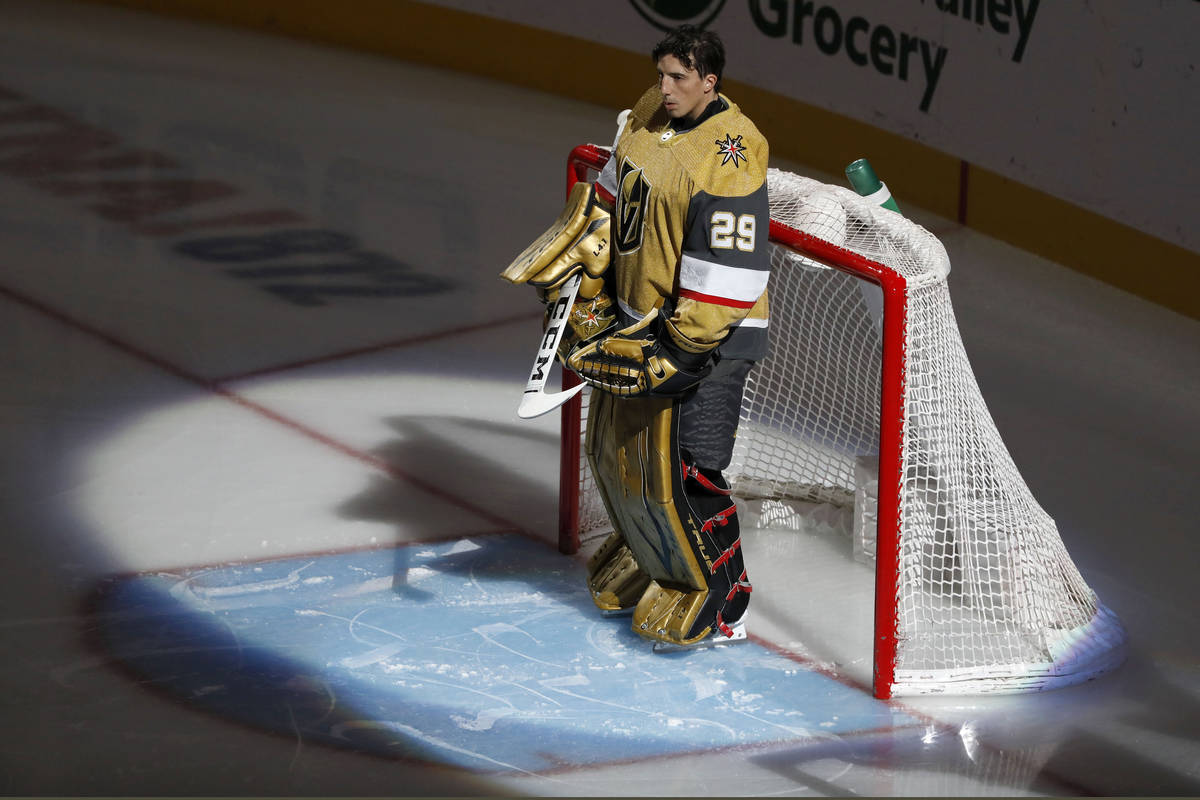 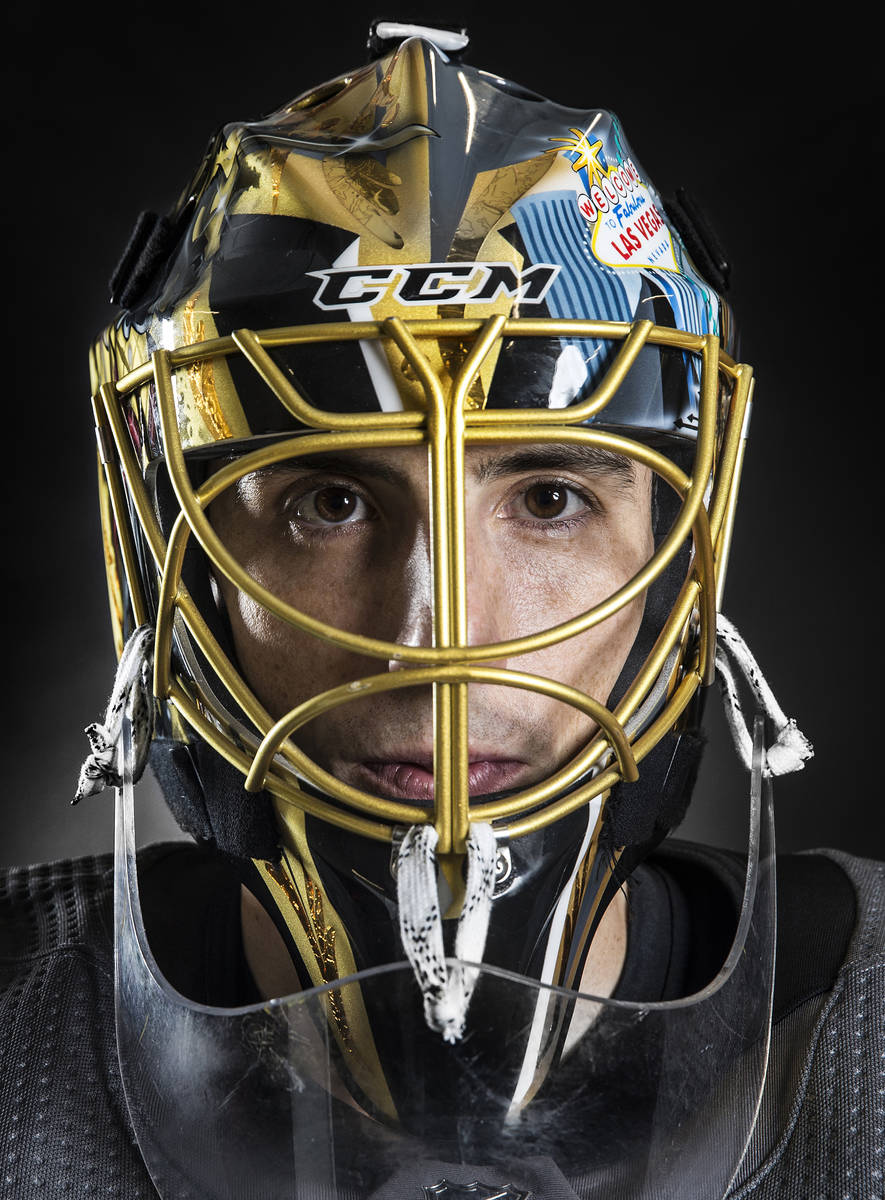 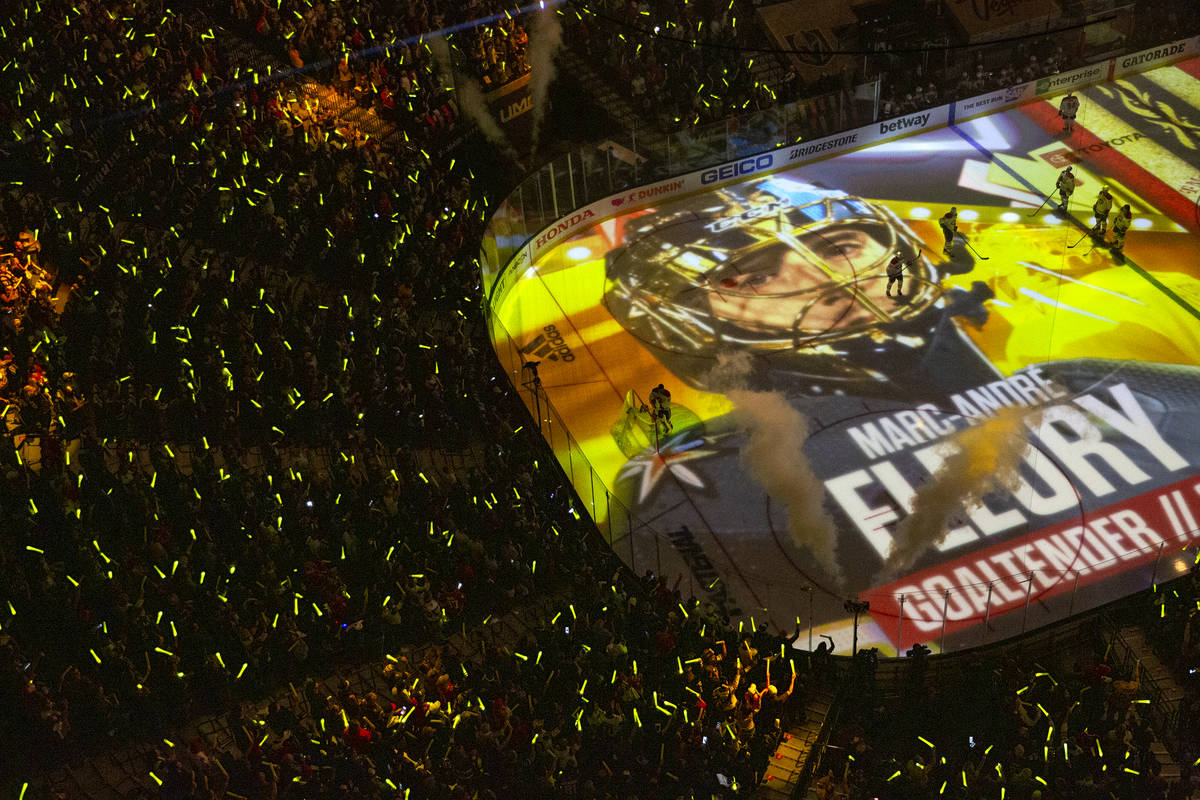 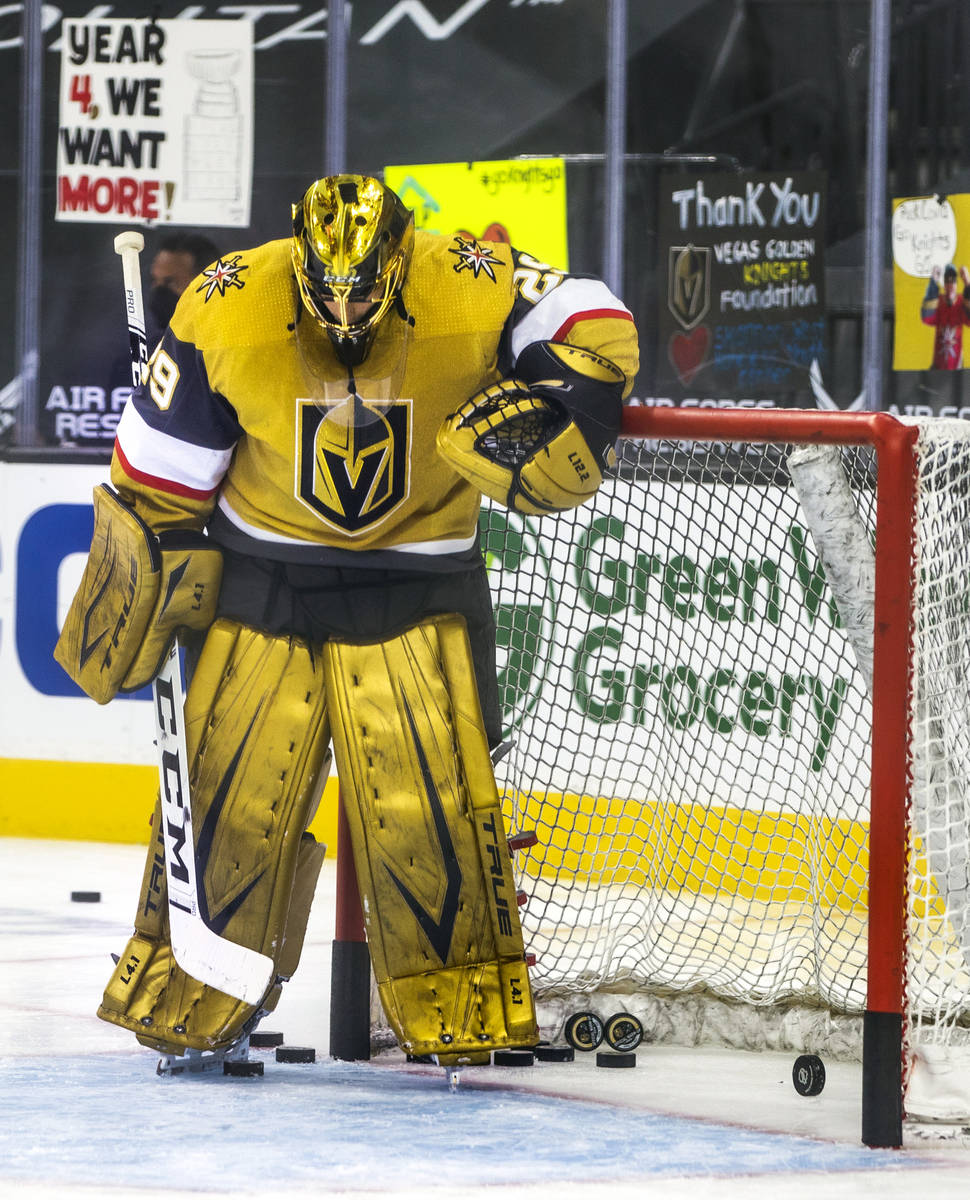 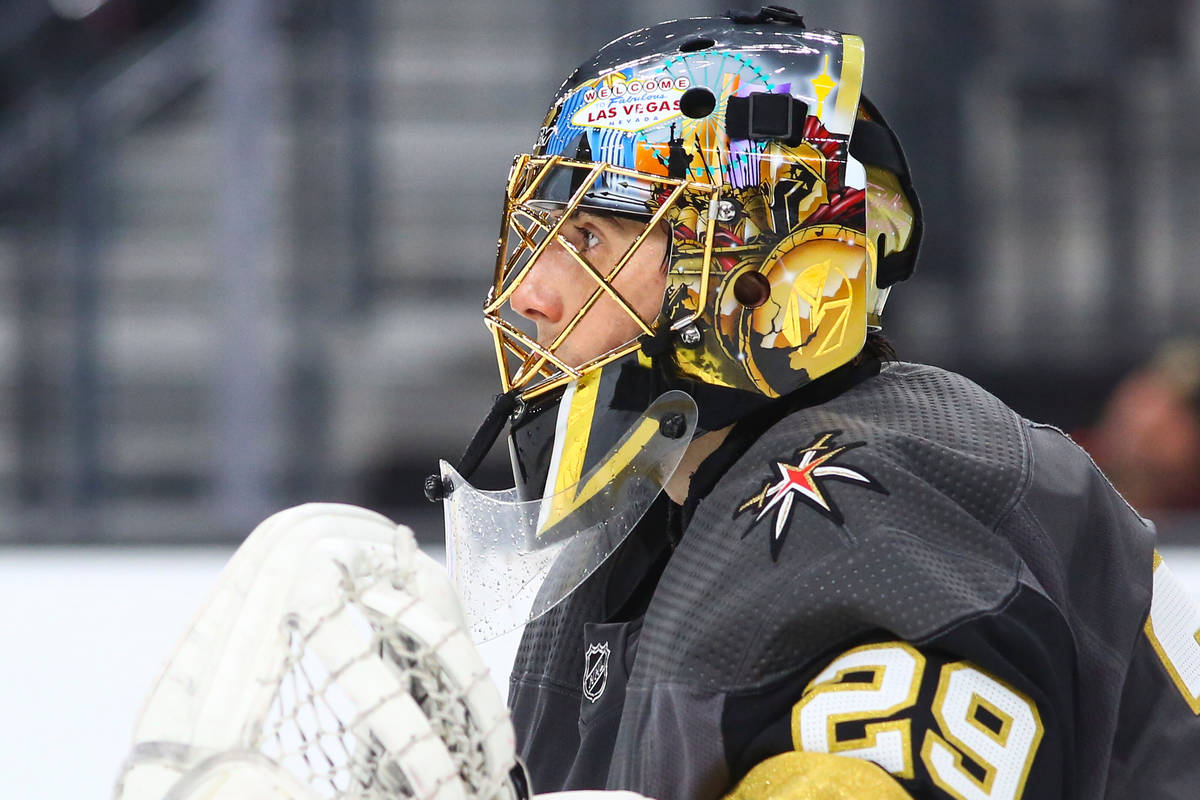 The Vezina Trophy winner and longtime face of the franchise was traded to the Chicago Blackhawks for forward Mikael Hakkarainen in a salary cap-clearing move for the Knights. That means the third-winningest goaltender in NHL history and future Hall of Famer is on the third team of his 17-year career.

With Fleury’s time in Las Vegas at an end, here’s a look back at his time with the team:

— June 11, 2017: Fleury and the Pittsburgh Penguins won their second consecutive Stanley Cup with a 2-0 win over the Nashville Predators. Fleury finished 9-6 that postseason, but goaltender Matt Murray started every game of the Stanley Cup Final.

— June 21, 2017: The Knights selected Fleury in the expansion draft. The Penguins also gave up a 2020 second-round pick, which was later used to acquire goaltender Robin Lehner. Fleury was at the draft and wore a Knights’ sweater.

— Oct. 6, 2017: Fleury started the Knights’ first game against the Dallas Stars. He stopped 45 of 46 shots and bought enough time for the team to make a late comeback in a 2-1 win.

— Dec. 12, 2017: Fleury returned to the lineup after nearly a two-month absence and allowed six goals in a loss to Detroit. He went 5-0-1 in his next six starts, including a home win against Pittsburgh in which he allowed just one goal.

— Jan. 10, 2018: The NHL named Fleury an All-Star for the third time in his career. He won the Saves Streak event at the competition and helped the Pacific Division to the championship.

— Feb. 6, 2018: Fleury made his anticipated return to Pittsburgh and gave up five goals on 38 shots in a loss.

— April 7, 2018: Fleury made his final regular-season start against Calgary. He finished with the highest save percentage (.927) and goals-against average (2.24) of his career and was fifth in the Vezina Trophy voting.

— April 17, 2018: Fleury capped a first-round sweep of Los Angeles with his second shutout of the series. He allowed three goals in 275:01 against the Kings for a goals-against average of 0.65. podcast

— May 20, 2018: The Knights grabbed the Clarence S. Campbell Bowl as Western Conference champions after a five-game victory against Winnipeg. Fleury posted a .956 save percentage in the last four games, all victories.

— June 7, 2018: The Knights’ dream season ended with a five-game loss to the Washington Capitals in the Stanley Cup Final. Fleury allowed 20 goals in the series after giving up 27 in his first 15 playoff games.

— June 13, 2018: Fleury signed a three-year extension with the Knights. Its $7 million average annual value was tied for the third-highest among goaltenders at the time.

— Oct. 4, 2018: Fleury was pulled from his first start of the Knights’ second season after allowing five goals to the Philadelphia Flyers.

— Jan. 2, 2019: The NHL named Fleury an All-Star for the second straight year. At the time, he led the league with 23 wins and six shutouts.

— April 6, 2019: Fleury made his final start of the season against Los Angeles after missing time late in the year. Despite that, he finished fourth among goaltenders in ice time.

— April 23, 2019: The Knights’ season ended with an overtime loss in Game 7 of their first-round series against San Jose. They led 3-0 3:36 into the third period, but the Sharks scored four power-play goals after a controversial major penalty on center Cody Eakin. Forward Barclay Goodrow won it for San Jose with 1:41 left in overtime.

— Oct. 2, 2019: The Knights began their third season by defeating the Sharks in back-to-back games. Fleury started both and allowed two goals on 67 shots.

— Nov. 19, 2019: Fleury made one of the saves of the season, a leaping grab that denied Toronto’s Nic Petan. Fleury’s agent, Allan Walsh, dubbed it “the save of the century” on Twitter. The stop helped Fleury become the seventh goaltender in NHL history to win 450 games.

— Nov. 26, 2019: Fleury took a leave of absence from the Knights to be with his family. His father, Andre, died the following day.

— Dec. 30, 2019: The NHL named Fleury an All-Star for the third consecutive year. He withdrew from the event, and left wing Max Pacioretty represented the Knights instead.

— Feb. 24, 2020: The Knights acquired Lehner from the Blackhawks before the trade deadline. General manager Kelly McCrimmon said the trade was made because the team wasn’t confident in its depth behind Fleury.

— March 9, 2020: Fleury made his final regular-season start before the COVID-19 pause and defeated Edmonton 3-2. The win gave him 466 career victories, fifth-most all time.

— July 13, 2020: The Knights reconvened for training camp, but Fleury sat out. He missed the first three days of camp before practicing with the team.

— Aug. 6, 2020: Fleury made his first postseason start against St. Louis and gave up four goals on 17 shots. The Knights still won on their way to earning the No. 1 seed in the Western Conference.

— Aug. 11, 2020: Coach Pete DeBoer announced Lehner would start Game 1 of the team’s first postseason series against Chicago, saying “it wasn’t what (Fleury) didn’t do. … It’s what Robin has done since he got here.”

— Aug. 22, 2020: Walsh created a stir by tweeting a picture of Fleury with a sword in his back labeled “DeBoer” on the eve of the Knights’ second-round series. The post seemed to be a clear signal that Fleury’s camp wasn’t happy about him losing playing time.

— Oct. 3, 2020: The Knights signed Lehner to a five-year, $25 million extension. The contract gave the team the second-most expensive goalie tandem in the NHL.

— Oct. 12, 2020: McCrimmon announced Fleury was staying with the Knights despite Walsh’s tweet and his high cap number prompting trade speculation.

— Jan. 16, 2021: Fleury stopped 21 of 22 shots in his first start of the season against Anaheim, beginning a five-game winning streak.

— Feb. 27, 2021: Fleury got his 100th win with the Knights in his 168th game. He required the second-fewest games to become the first goalie in a franchise’s history to reach that milestone.

—May 5, 2021: Fleury won his 490th game to move into third place on the all-time wins list, ahead of Roberto Luongo. Only Martin Brodeur and Patrick Roy have more wins.

— June 10, 2021: Fleury stopped 30 of 33 shots as the Knights eliminated the Presidents’ Trophy-winning Colorado Avalanche at T-Mobile Arena to advance to the NHL semifinals.

— June 18, 2021: Fleury made a puck-handling mistake in Game 3 against Montreal, leading to a game-tying goal by Canadiens forward Josh Anderson with 1:55 remaining in the third period. Montreal won 3-2 in overtime.

— June 22, 2021: Fleury made his final appearance with the Knights, giving up three goals on 25 shots in a 4-1 loss at T-Mobile Arena. The win gave Montreal a 3-2 series lead, and the Canadiens eliminated the Knights in Game 6 against Lehner. Fleury finished with a .904 save percentage in the series.

June 29, 2021: Fleury won the Vezina Trophy for the NHL’s best goaltender in his first year as a finalist. His 1.98 goals-against average and .928 save percentage were career highs. His 20.15 goals saved above average in all situations ranked fourth in the league.

July 27, 2021: Fleury was traded to Chicago in a salary-cap clearing move for the Knights. Walsh tweeted that his client will “seriously evaluate his hockey future at this time.”