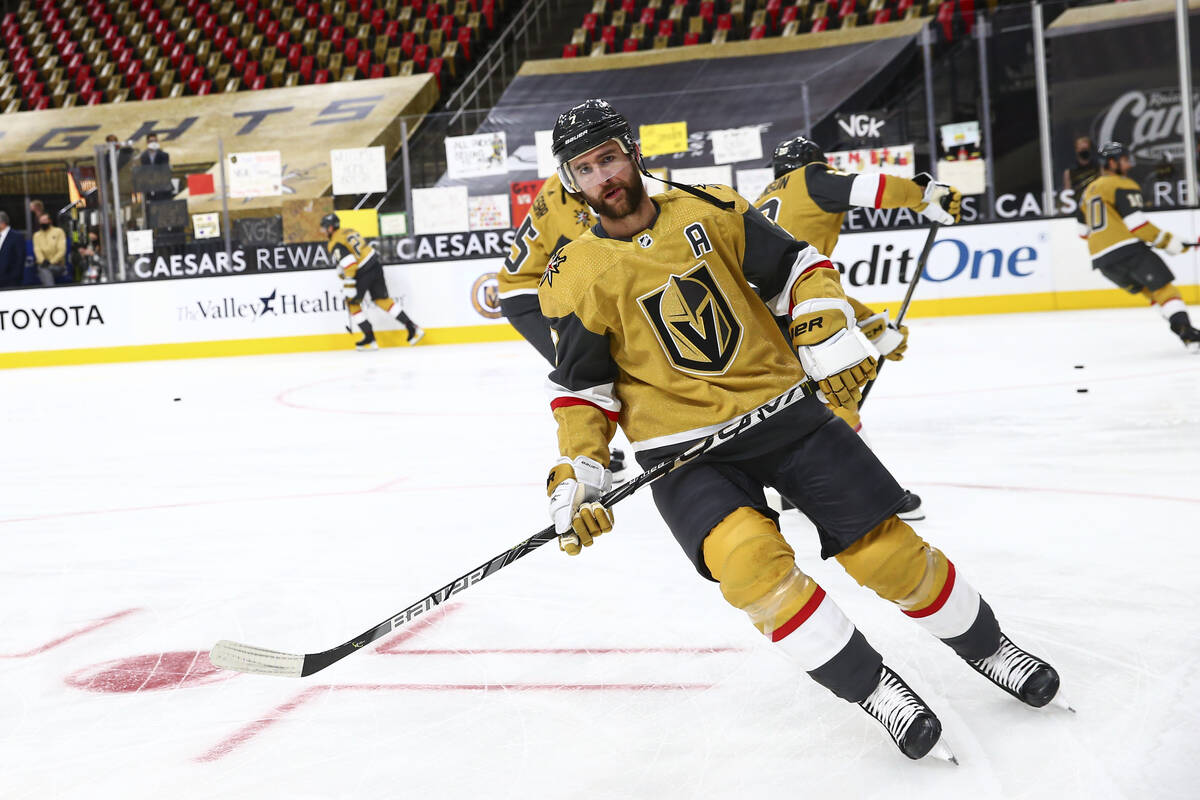 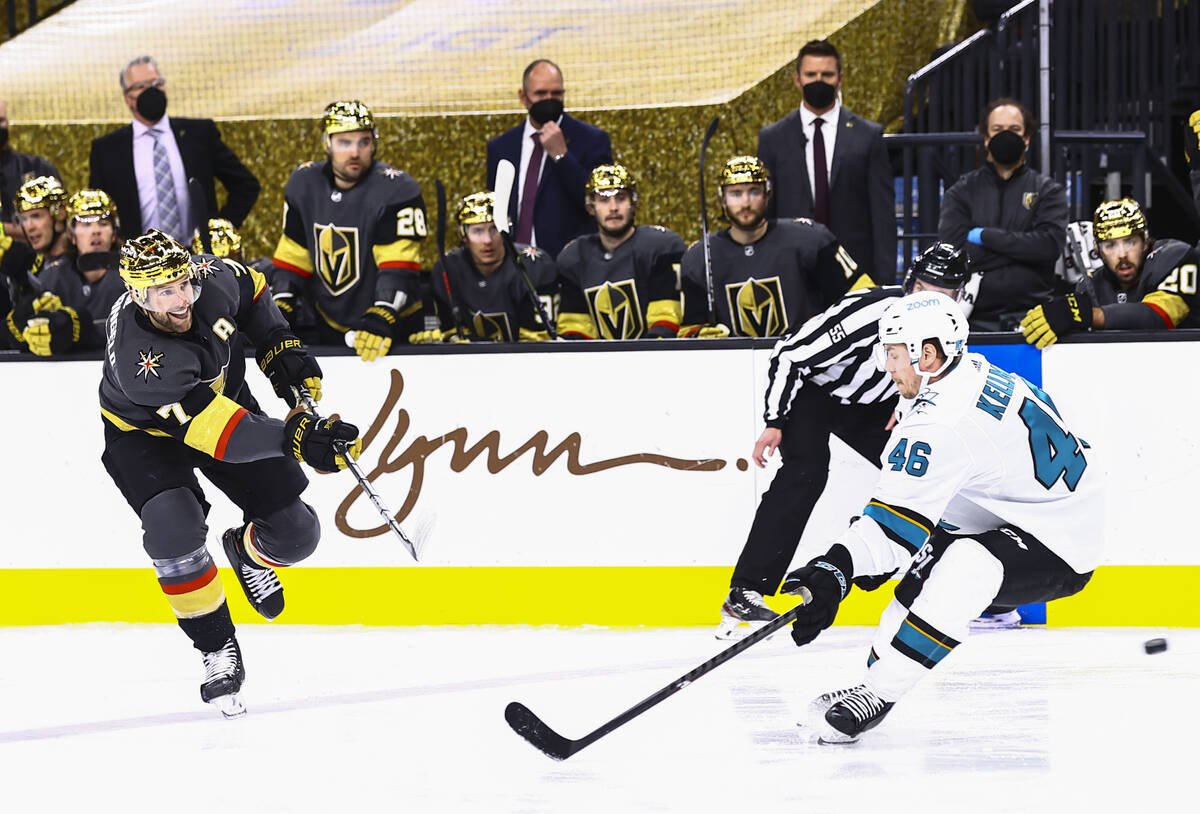 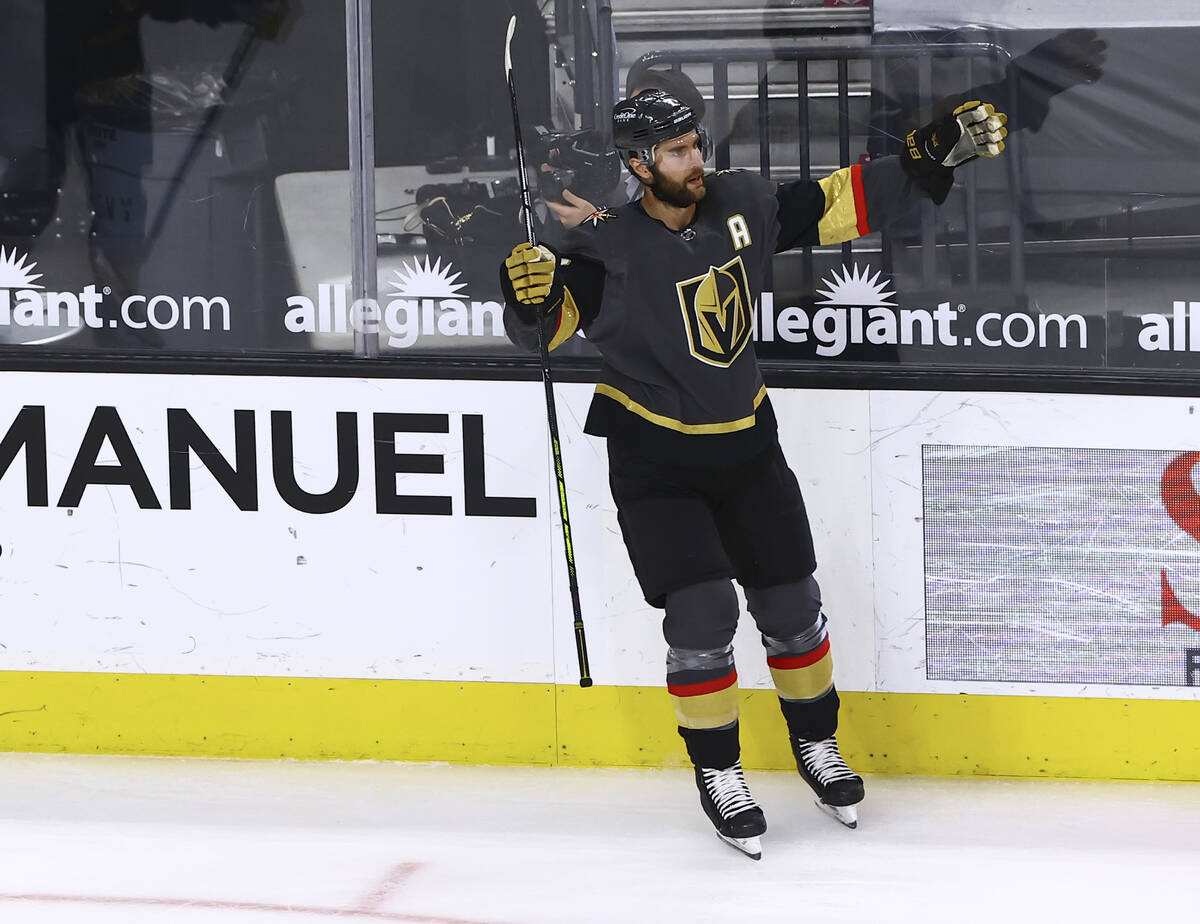 Golden Knights' Alex Pietrangelo celebrates after his goal against Colorado Avalanche during the first period of an NHL hockey game at T-Mobile Arena in Las Vegas on Monday, May 10, 2021. (Chase Stevens/Las Vegas Review-Journal) @csstevensphoto 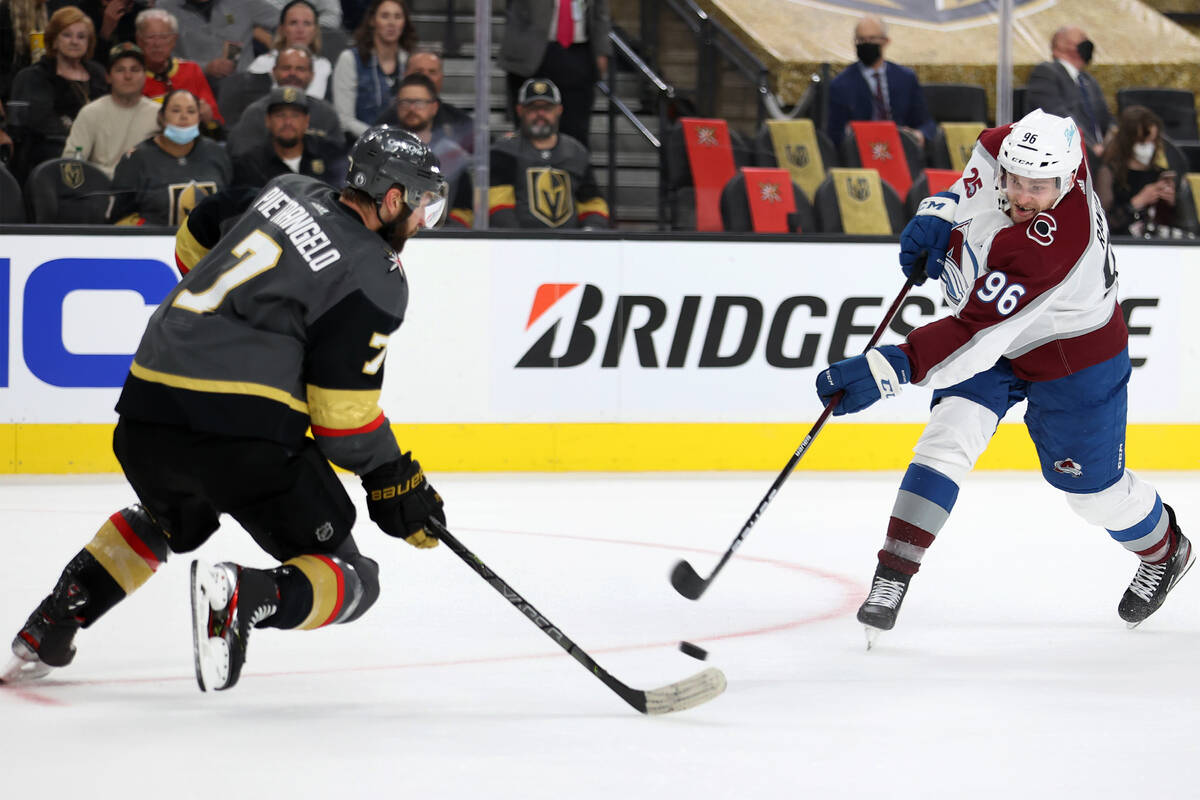 Golden Knights defenseman Alex Pietrangelo (7) jumps over San Jose Sharks center Tomas Hertl (48) while chasing down a puck for a shot during the third period of an NHL game at T-Mobile Arena on Wednesday, April 21, 2021 in Las Vegas. L.E. Baskow/Las Vegas Review-Journal) @Left_Eye_Images

The decision shows how highly valued Pietrangelo remains around hockey entering his second season with the Knights. And after getting a full year to adjust to his surroundings and familiarize himself with a new system, he has a chance to showcase that before going to Beijing. “(It’s) not surprising,” said Knights captain Mark Stone, a likely Team Canada teammate. “He’s been one of the most consistent defensemen in this league since he entered. He plays 200 feet, which is rare for a defenseman. Kills penalties. Plays on our power play. Shuts guys down. Can be out there five-on-six and six-on-five.”

Coach Pete DeBoer and Kelly McCrimmon said he was the Knights’ best player in their six-game victory over the Presidents’ Trophy-winning Colorado Avalanche in the second round. Pietrangelo scored five points against the Avalanche and added another four in the next round against Montreal.

He was the true two-way force the Knights signed to a seven-year, $61.6 million deal in October 2020. But things didn’t always go that smoothly.

Pietrangelo faced numerous obstacles switching teams for the first time in his career. The former captain and Stanley Cup champion in St. Louis didn’t get much of a chance to experience his new city or get to know his new teammates off the ice because of the NHL’s COVID-19 protocols. A shortened training camp with no preseason games didn’t give him much time to adjust to the Knights’ style of play.

His progress was also slowed by a stint on the NHL’s COVID-related absences list and an upper-body injury that caused him to miss 12 games. His points-per-game average (0.56) was its lowest since 2015-16.

Pietrangelo admitted it was frustrating at times.

“You trust the process, and goal scoring can be streaky, whether you score 10 a year or 50 a year,” he said. “… Sometimes things just turn and you start scoring goals and the confidence goes up. I tried not to get too discouraged.”

Pietrangelo had more shot attempts and scoring chances per 60 minutes with the Knights than during his last season in St. Louis, when he finished fourth in the Norris Trophy voting.

He knew his numbers would look a lot different if those attempts started finding the net. And in the last two rounds of the playoffs, they did.

The Knights hope a year of experience and comfort will mean that’s the Pietrangelo they get the entire season. His quick Olympic call already shows what Team Canada expects from him.

“You’re naming the first three guys, I think everyone’s got those three guys,” said DeBoer, a Team Canada assistant. “McDavid, Crosby and him. … I think that’s an easy one.”