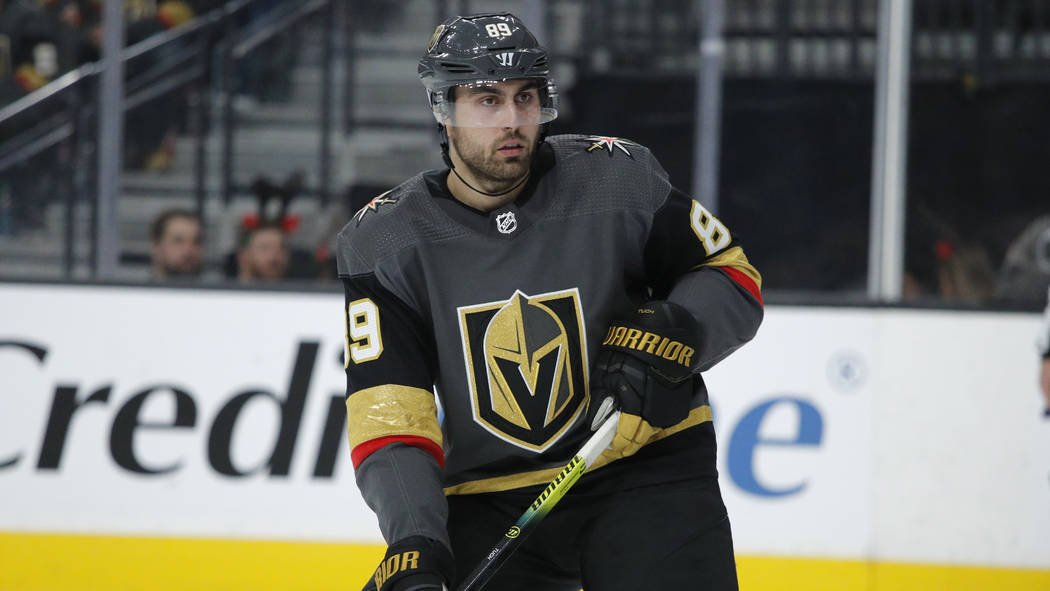 EDMONTON, Alberta — Alex Tuch’s return to the Golden Knights lineup has been delayed.

The forward had a minor setback in his recovery from a lower-body injury, according to coach Pete DeBoer, and did not play in Monday’s game against Edmonton at Rogers Place.

Tuch was eligible to be activated from long-term injured reserve Monday, but instead returned to Las Vegas to continue his rehabilitation.

“Nothing that I’m too worried about,” DeBoer said. “I thought he was going to be available (Monday) on this trip, but he’s not. He was on the trip with us. He went back.”

The Knights continue their five-game trip Thursday at Minnesota, then return home before traveling to face Colorado on Sunday.

Tuch was injured Feb. 13 against St. Louis when he crashed into the boards behind the Blues net with 2:41 remaining in the third period. He has missed 11 games.

He was considered day to day and practiced in a noncontact jersey Thursday at City National Arena before the Knights left for Winnipeg.

But Tuch did not participate in Saturday’s practice in Calgary and was seen riding a stationary bicycle near the Knights’ locker room, which offered a hint something may have been wrong.

Tuch missed the first 13 games of the season with an upper-body injury and also was sidelined for four games in November after a check to the head from Winnipeg’s Adam Lowry.

The line of Chandler Stephenson centering Nick Cousins and Brandon Pirri was one of the Knights’ best in their first four games together, with a shot share of almost 75 percent during 5-on-5 play.

But the group didn’t have anything to show for their efforts until Sunday.

Cousins set up defenseman Nick Holden for the Knights’ second goal against Calgary, and Pirri earned the secondary assist. Stephenson didn’t have a point on the play, but his patience and pass off the wall to Pirri started the rush.

“I think our line’s been playing pretty well, generating a lot of offense,” Cousins said. “We’re getting lots of chances, we just haven’t buried them. So it was nice to see one go in.”

Tale of the tape

The Knights could see any of seven opponents in the first round of the playoffs should they qualify, and the remaining schedule provides a sneak preview at the competition.

The Knights face wild-card contender Minnesota on Thursday and have two games remaining against both Arizona and Vancouver. They also see Winnipeg, Calgary and Edmonton once more over the final 11 games.

“You do a lot of sizing up,” defenseman Nate Schmidt said. “This time of year, you really start to see teams take shape. It really does come to what you see now is most likely what you’re going to see later on.”