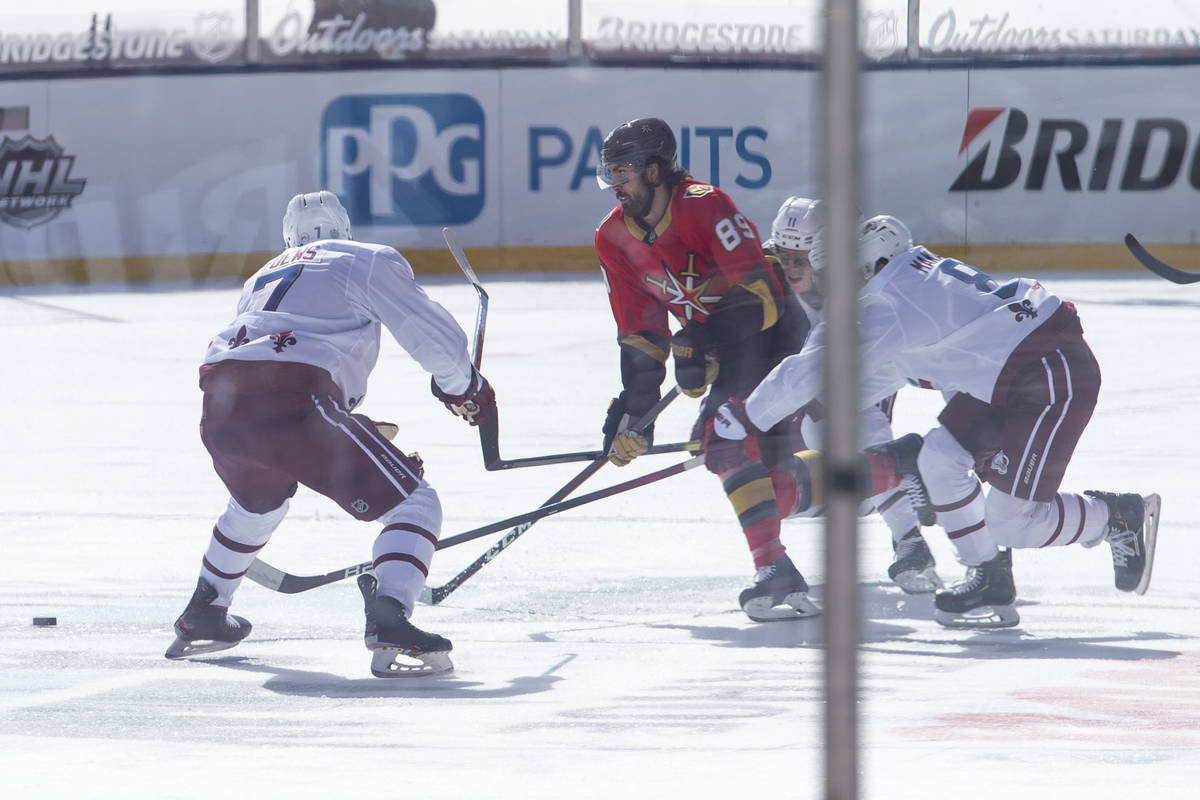 Alex Tuch said skating on the NHL’s outdoor rink at Edgewood Tahoe Resort on Saturday reminded him of skating in his backyard growing up in Baldwinsville, New York.

It only seems fitting then that he scored a goal fit for an outdoor pickup game.

The left wing made a spectacular move in the third period to give the Knights a fighting chance in their 3-2 loss to the Colorado Avalanche. He skated toward the net near the goal line before spinning clockwise around Avalanche center Nazem Kadri outside the crease.

Alex Tuch of the @GoldenKnights grew up playing on an outdoor rink in Baldwinsville, New York, but likely has never scored an outdoor goal quite like this one. https://t.co/PIFxNdGQbN #NHLStats #NHLOutdoorsAfterDark pic.twitter.com/9OM5yic5bC

Tuch made it to the corner of the blue paint before firing a backhand shot that beat goaltender Philipp Grubauer and cut the Knights’ deficit to 3-2 with 5:35 to play. As impressive as the move was, Tuch said it wasn’t one that came from his years of practice outdoors.

“I never shot backhand,” he said. “I always worked on my forehand.”

Tuch’s backhand still worked fine Saturday despite the lack of reps. It was his fifth goal of the season but first in the past five games.

The highlights are coming easier this season for the 24-year-old after he had an injury-plagued and inconsistent 2019-20 season. His game is in a much better place, and his spin-o-rama goal was proof of that.

“I just closed my eyes and tried to get the puck on net,” Tuch said. “I got pretty lucky there.”

Here are three other takeaways from the loss:

Knights defenseman Alex Pietrangelo provided a soundbite for the ages in the second period.

The alternate captain wore a microphone for NBC during the game, and the network played two clips during the broadcast. The first came when the teams were warming up for the second period, and the second came after Avalanche center Nathan MacKinnon’s spectacular near end-to-end goal with 9:42 left in the second.

Alex Pietrangelo as Nathan MacKinnon was coming down the ice:

The eight-hour intermission between the first and second periods was unlike anything the Knights had experienced.

Tuch and defenseman Alec Martinez said the team treated the first period as if it was a morning skate. Many players took their typical pregame naps and ate before heading back onto the ice for the 9 p.m. restart.

The coaches approached the break a little differently, however. They decided to treat the final two periods as a whole new game and prepared as such.

They reviewed video of the first period and presented the fixes they wanted the players to make as they would the morning after a normal game.

“I thought we did (fix things),” coach Pete DeBoer said. “I liked our second and third periods tonight for the most part.”

The Knights continue to struggle with a two-man advantage.

They had a five-on-three power play for 1:22 of the third period but couldn’t convert. They had one shot on goal, and it was a wrister that Mark Stone fired from 30 feet away.

“Disappointed with our looks in that and our execution,” DeBoer said. “We have to be a lot better.”

The Knights have one power-play goal in four five-on-three opportunities this season totaling 3:48. Only the Ottawa Senators have had more five-on-three chances.

In their history, the Knights have three five-on-three goals in 18 opportunities.