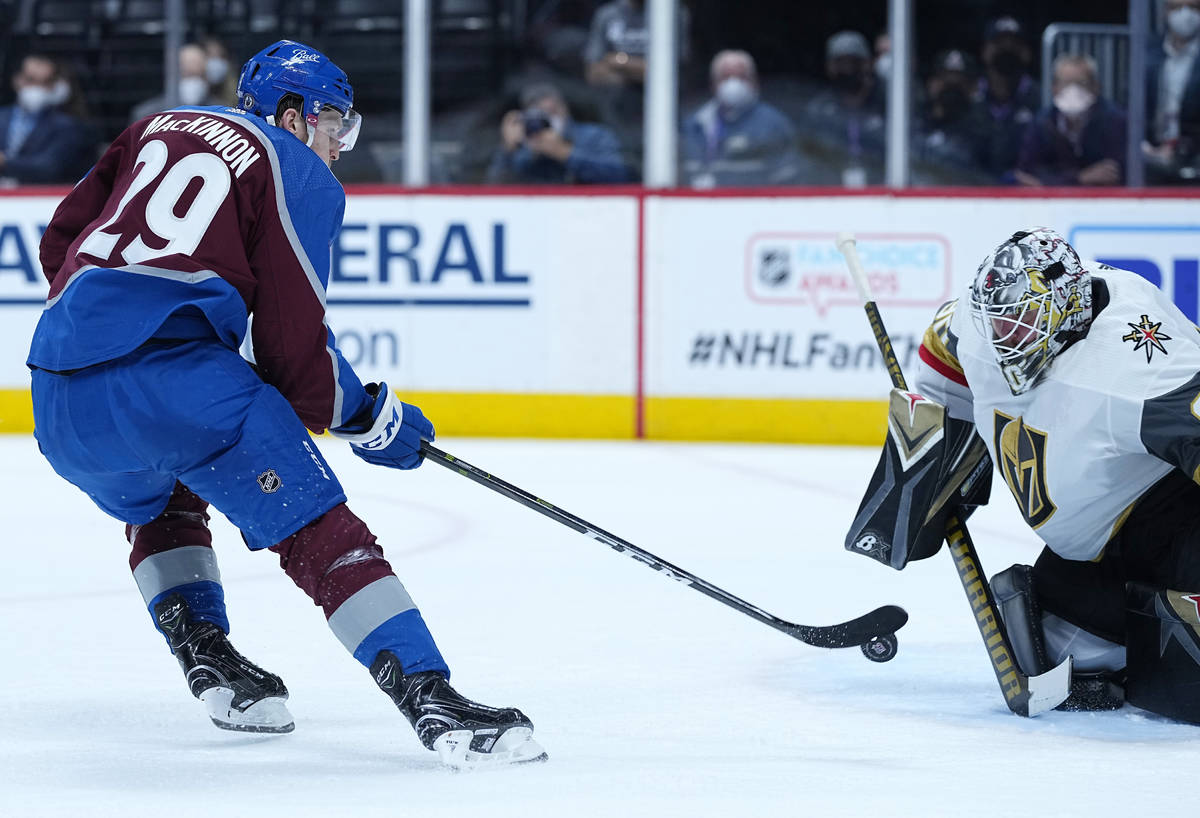 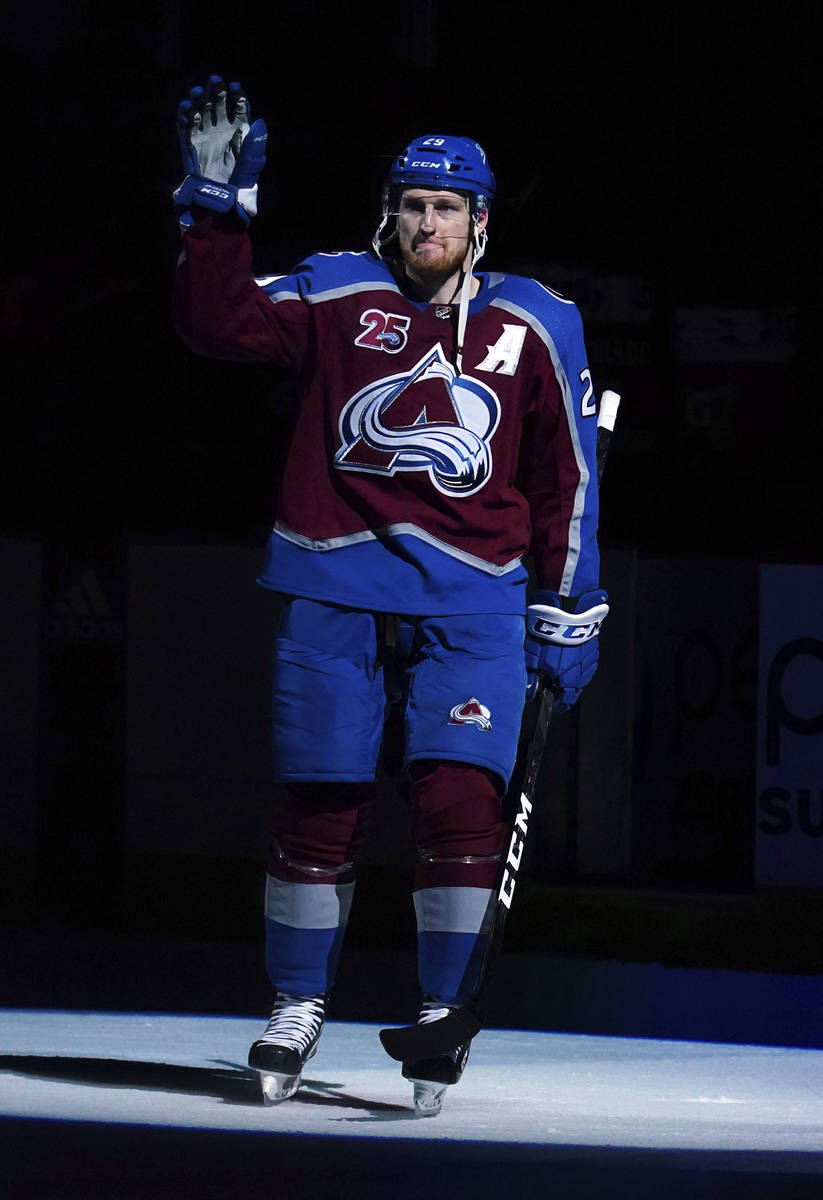 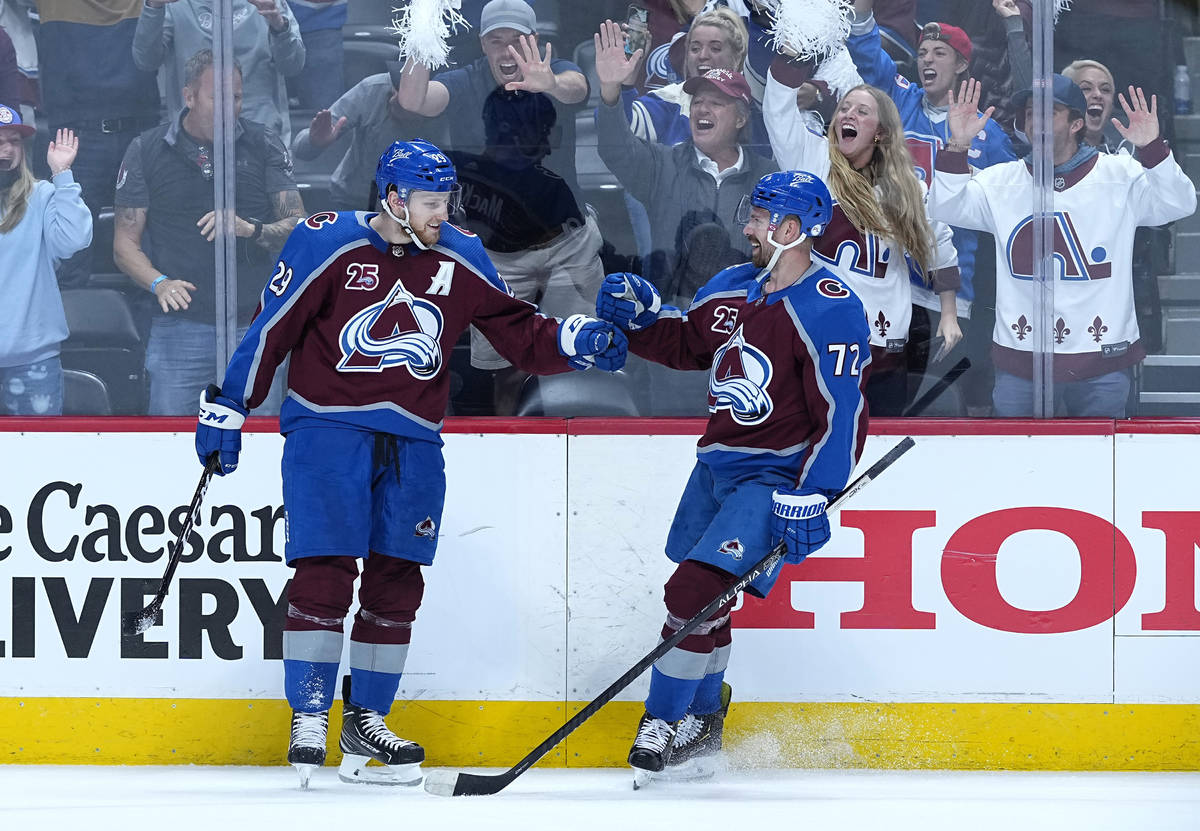 Colorado Avalanche center Nathan MacKinnon (29) is congratulated by teammate Joonas Donskoi (72) after scoring a goal against the Vegas Golden Knights in the second period of Game 1 of an NHL hockey Stanley Cup second-round playoff series Sunday, May 30, 2021, in Denver. (AP Photo/Jack Dempsey) 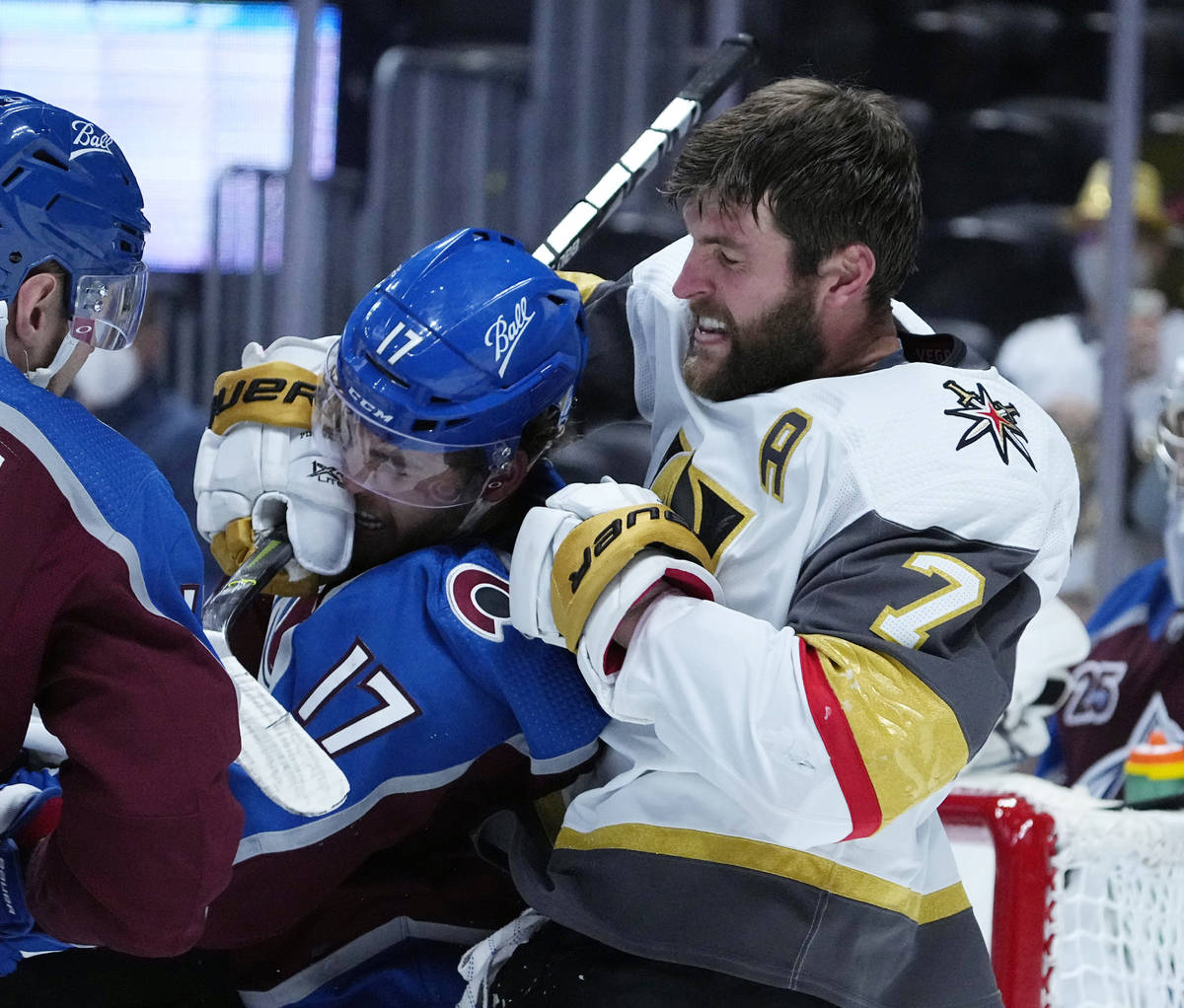 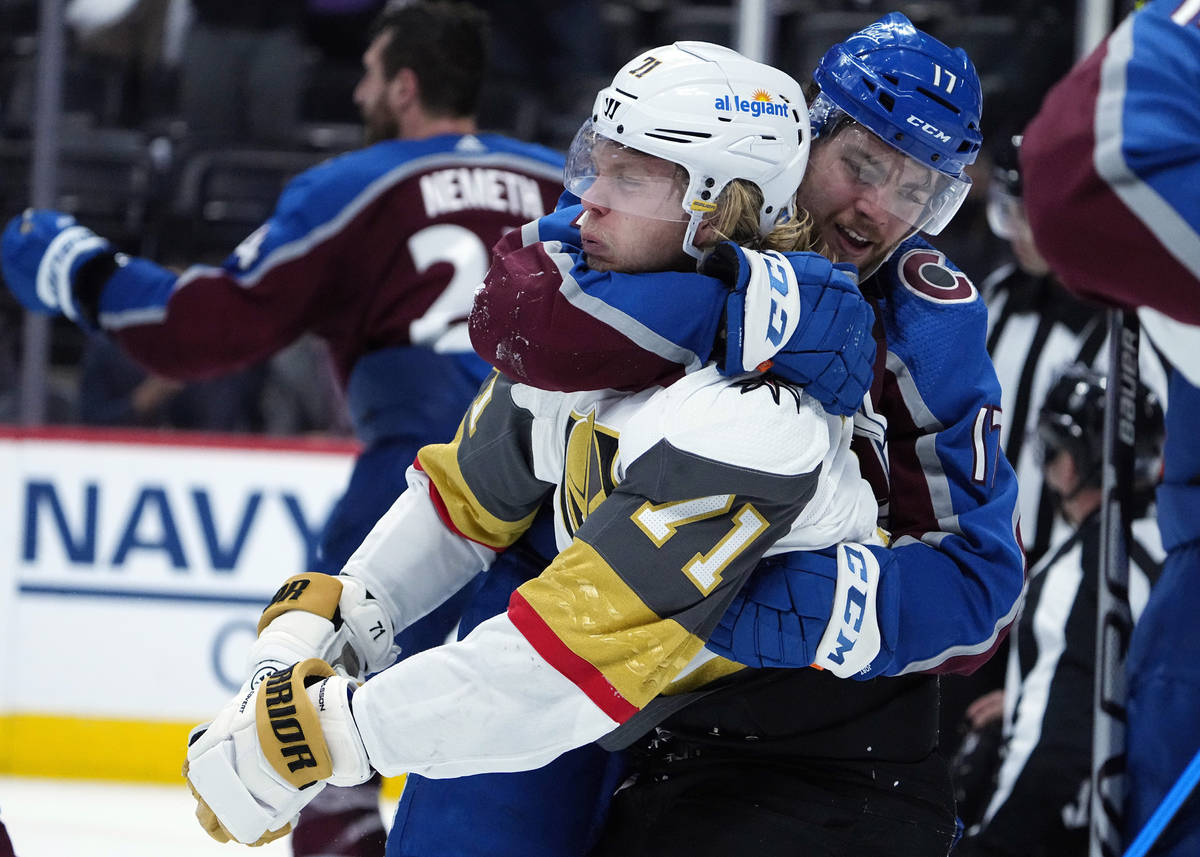 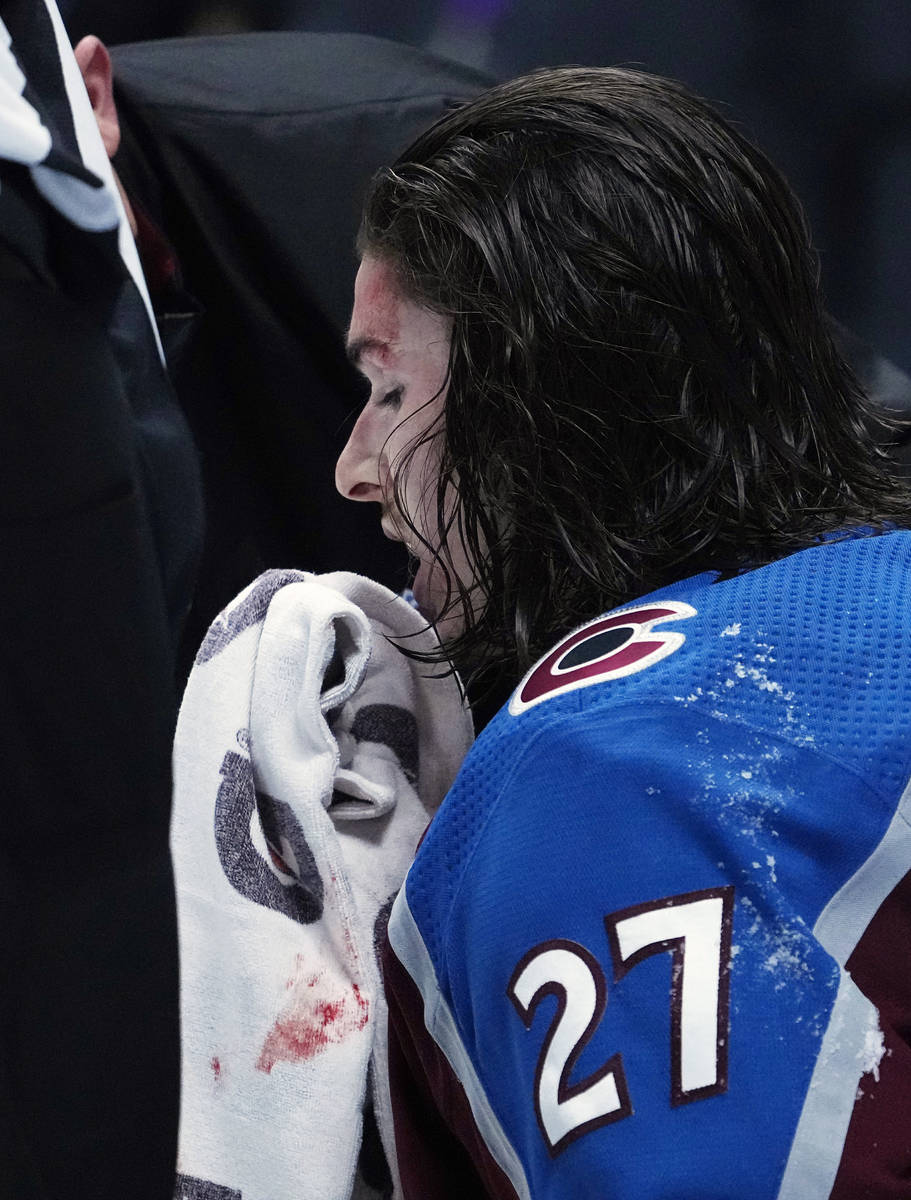 Colorado Avalanche defenseman Ryan Graves (27) wipes blood from his face after a fight against the Vegas Golden Knights in the third period of Game 1 of an NHL hockey Stanley Cup second-round playoff series Sunday, May 30, 2021, in Denver. (AP Photo/Jack Dempsey) 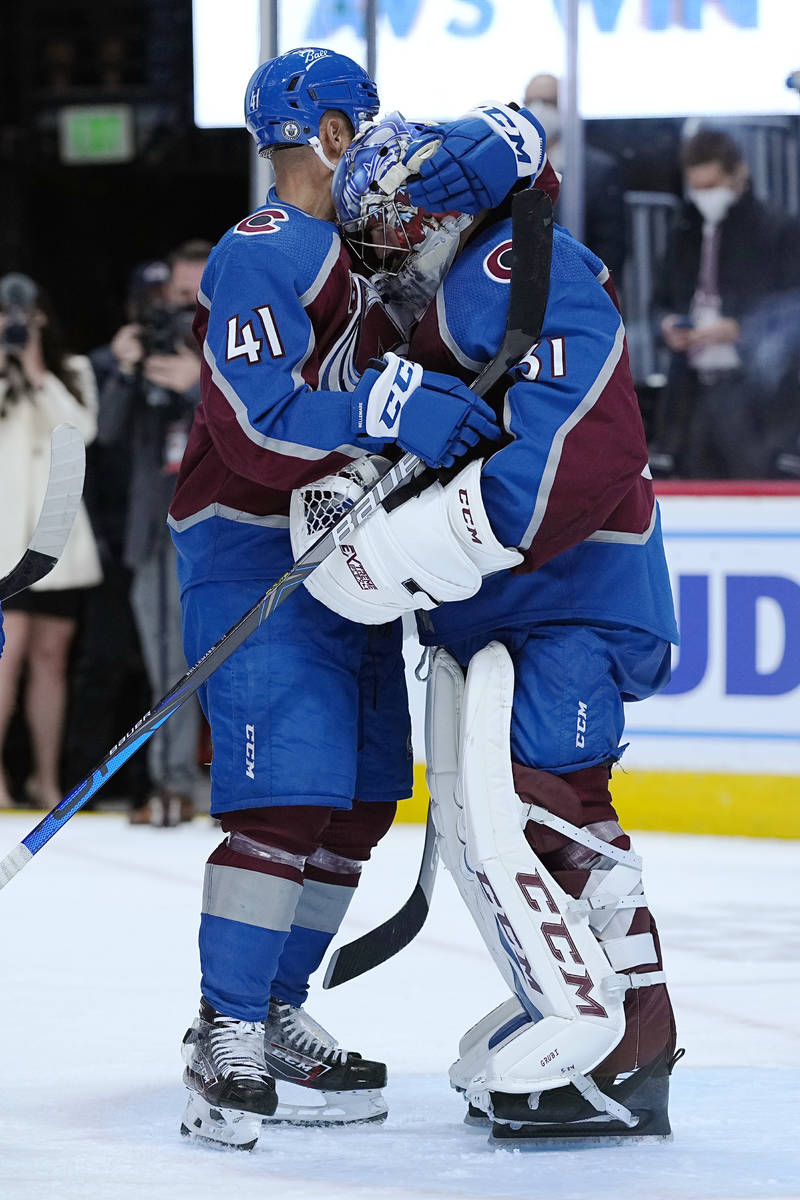 DENVER — The NHL’s most dangerous top line combined for 183 points in the regular season to lead the Colorado Avalanche to the Presidents’ Trophy.

It only felt as if they matched that total Sunday night.

Nathan MacKinnon, Gabriel Landeskog and Mikko Rantanen combined for eight points in Colorado’s 7-1 victory over the Golden Knights in Game 1 of the West Division final at Ball Arena.

“We played a good game,” Landeskog said. “It doesn’t mean anything going into Game 2. We’ve just got to follow it up and do the same thing again.”

The three combined for nine goals and 24 points in the first-round series sweep of St. Louis and picked up where they left off Sunday. Colorado has outscored its opponents 27-8 in starting the postseason 5-0.

Landeskog had two goals and an assist, and Rantanen got the scoring started with a goal on a backhander from a tricky angle in the first period before following it up with an assist on Landeskog’s power-play goal in the second period.

“It’s our job to lead the team offensively, and that’s what we try to do on a nightly basis,” Landeskog said.

MacKinnon, one of the NHL’s most explosive players, showcased his speed when he blew by Nic Hague and beat Robin Lehner in the second period for a goal. He had another goal and an assist.

“The top line set the tone again, but the whole team was involved, playing well and skating well,” Avalanche coach Jared Bednar said. “Our talk before the game was, we didn’t want to wade into this thing.

“I loved the way our team played, right away out of the gates. We were relentless with our puck pressure and showed great commitment to our checking game and capitalizing on our chances.”

MacKinnon has eight goals in the first five postseason games, the seventh player in league history to reach that mark.

Rantanen has a point in a team-record 15 consecutive playoff games.

“I loved his game, especially at the start,” Bednar said. “He was a horse on the puck. It seemed like everything was happening in slow motion for him. He was finding the open man all over the ice. … That line was really good, and he was outstanding.”

The big three, who are all homegrown top-10 draft picks of the Avalanche, had plenty of help.

Star defenseman Cale Makar, another top-10 pick for Colorado, had three assists before blasting a one-timer past Lehner for the final goal.

The Avalanche entered the game with a week off after the sweep of the Blues but quickly erased any thought of a potential slow start because of rust.

“It wasn’t a vacation,” Makar said. “Everyone took it serious and was ready to go, and we had a great start.”