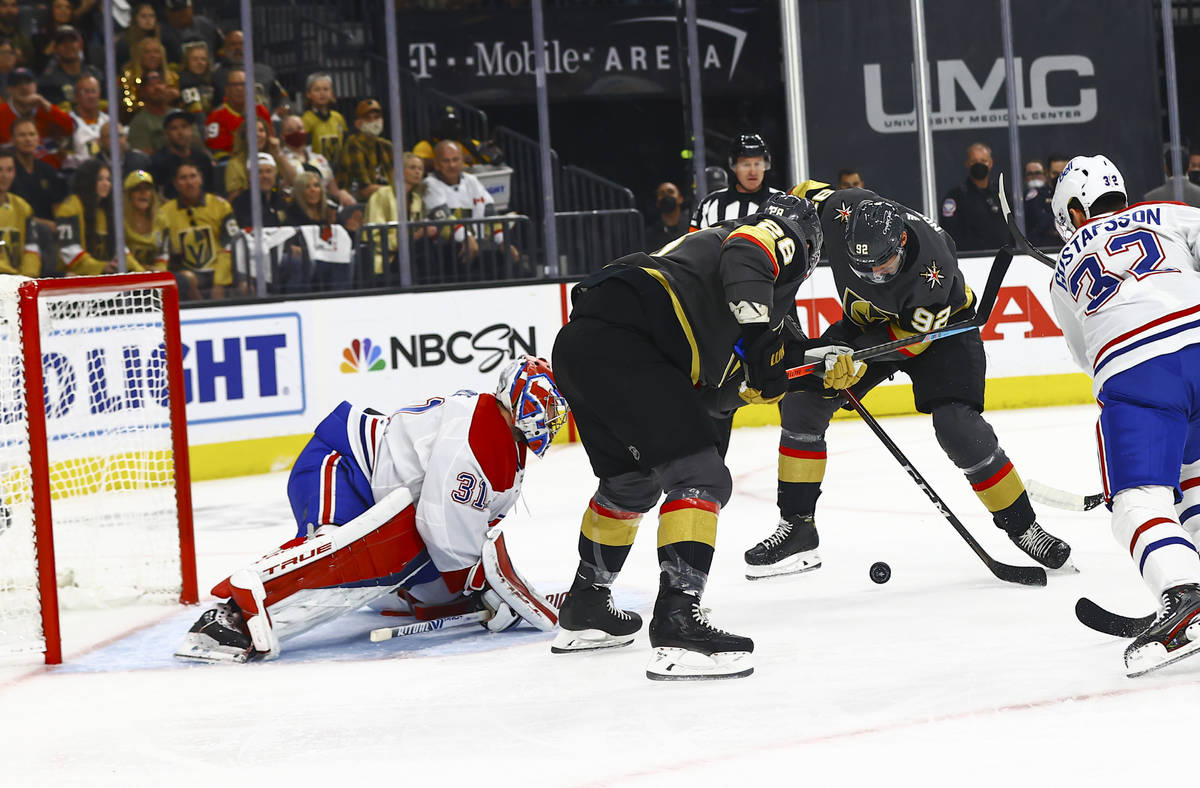 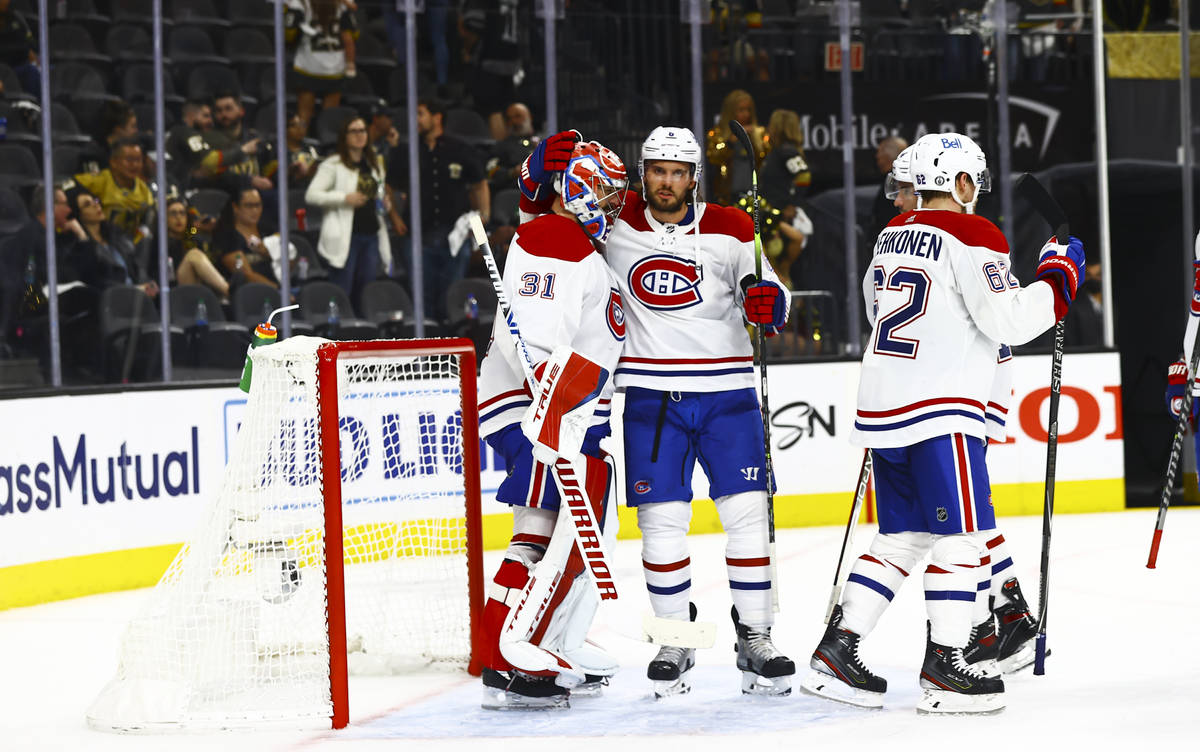 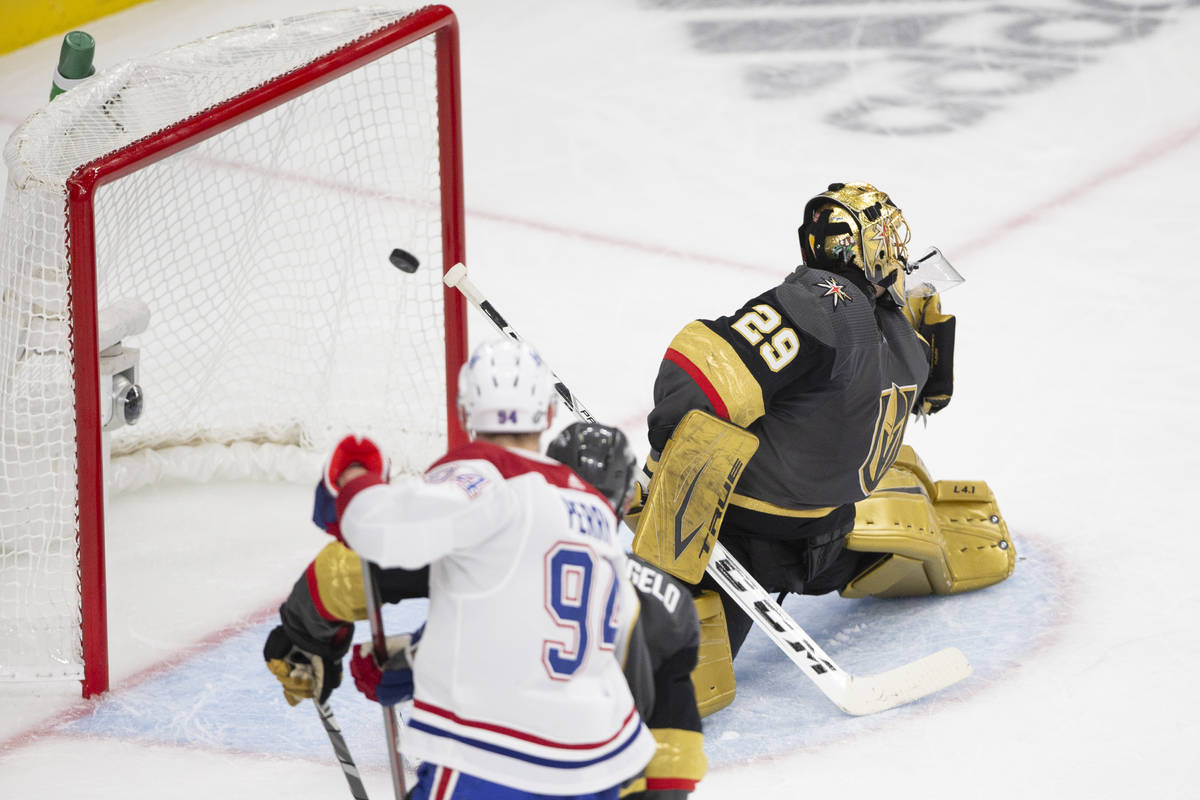 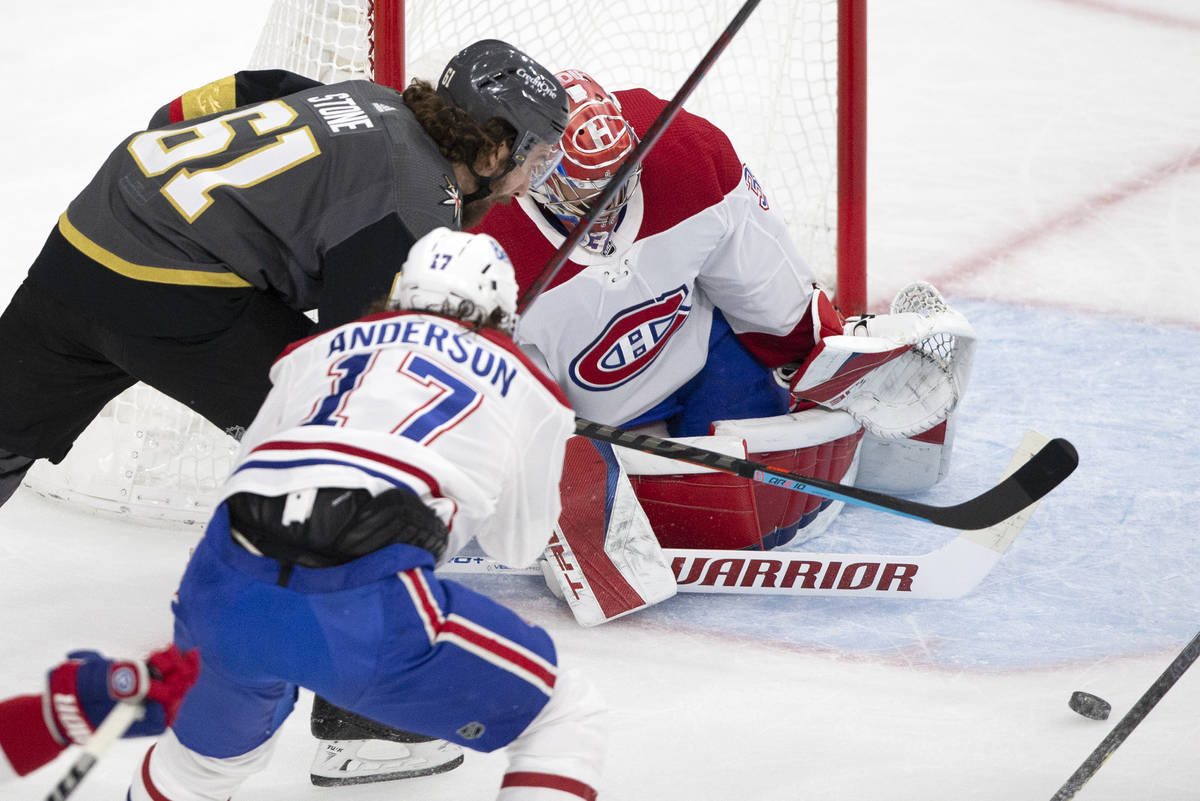 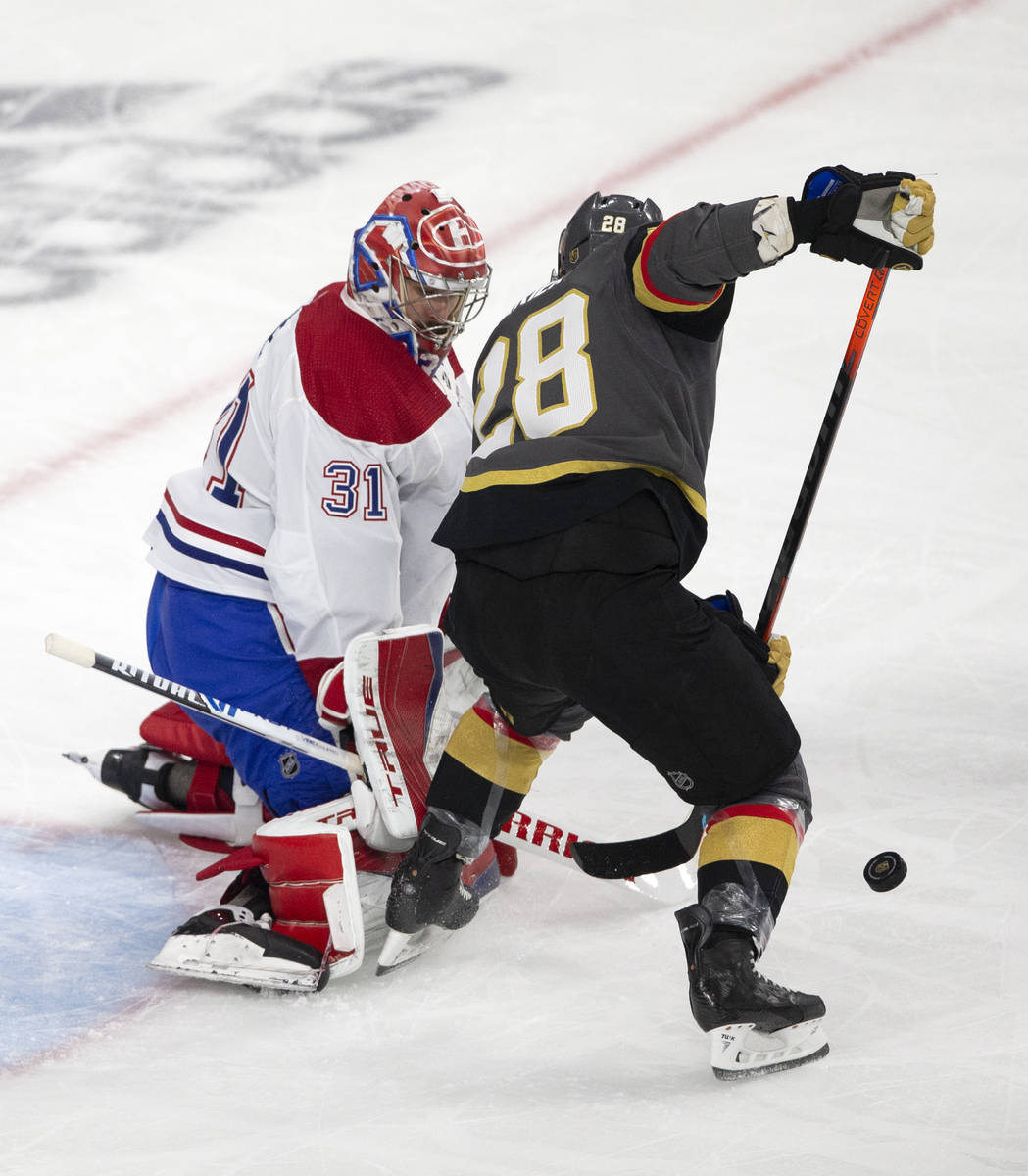 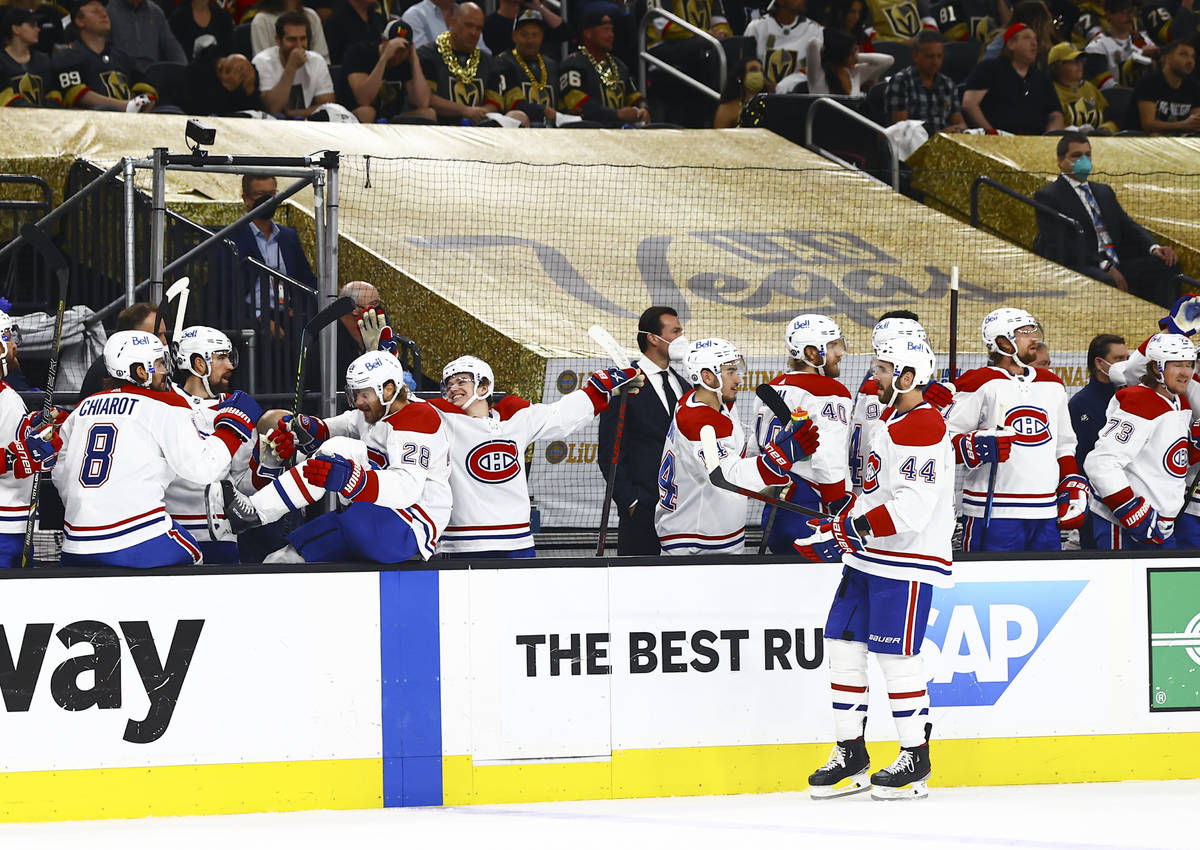 The Montreal Canadiens celebrate after a goal against the Golden Knights during the first period of Game 5 of an NHL hockey Stanley Cup semifinal playoff series at T-Mobile Arena in Las Vegas on Tuesday, June 22, 2021. (Chase Stevens/Las Vegas Review-Journal) @csstevensphoto 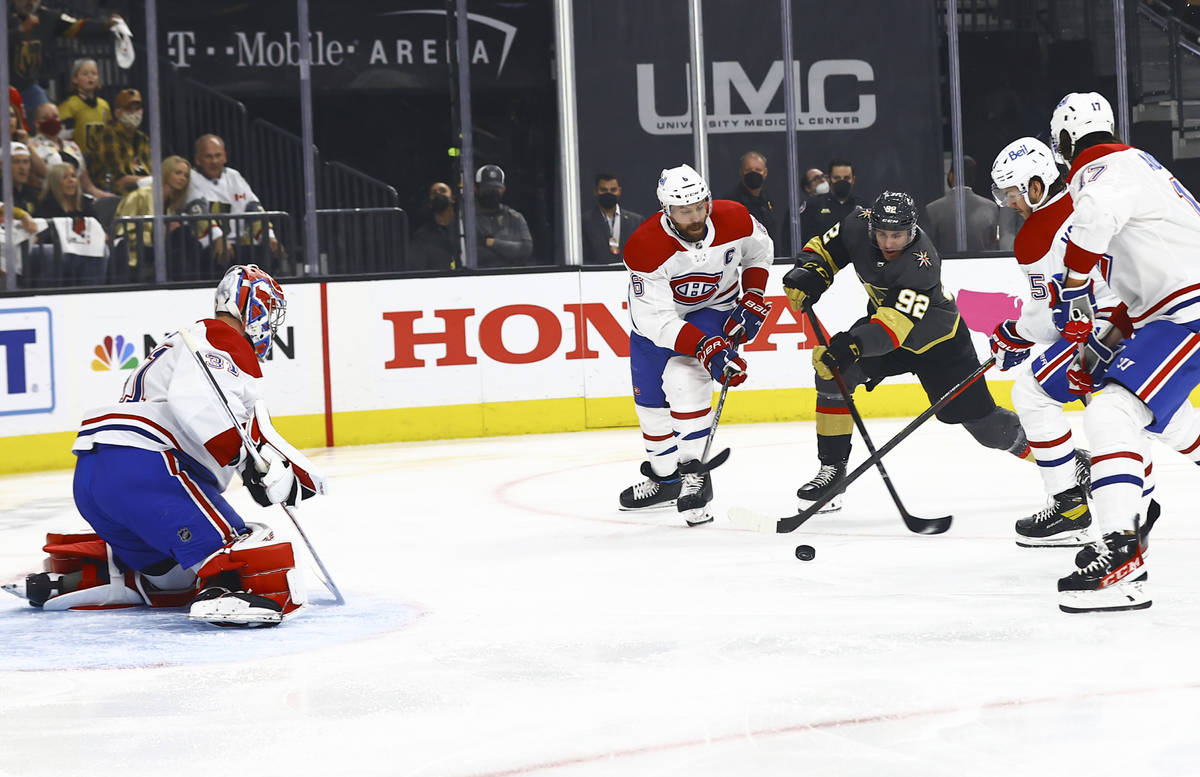 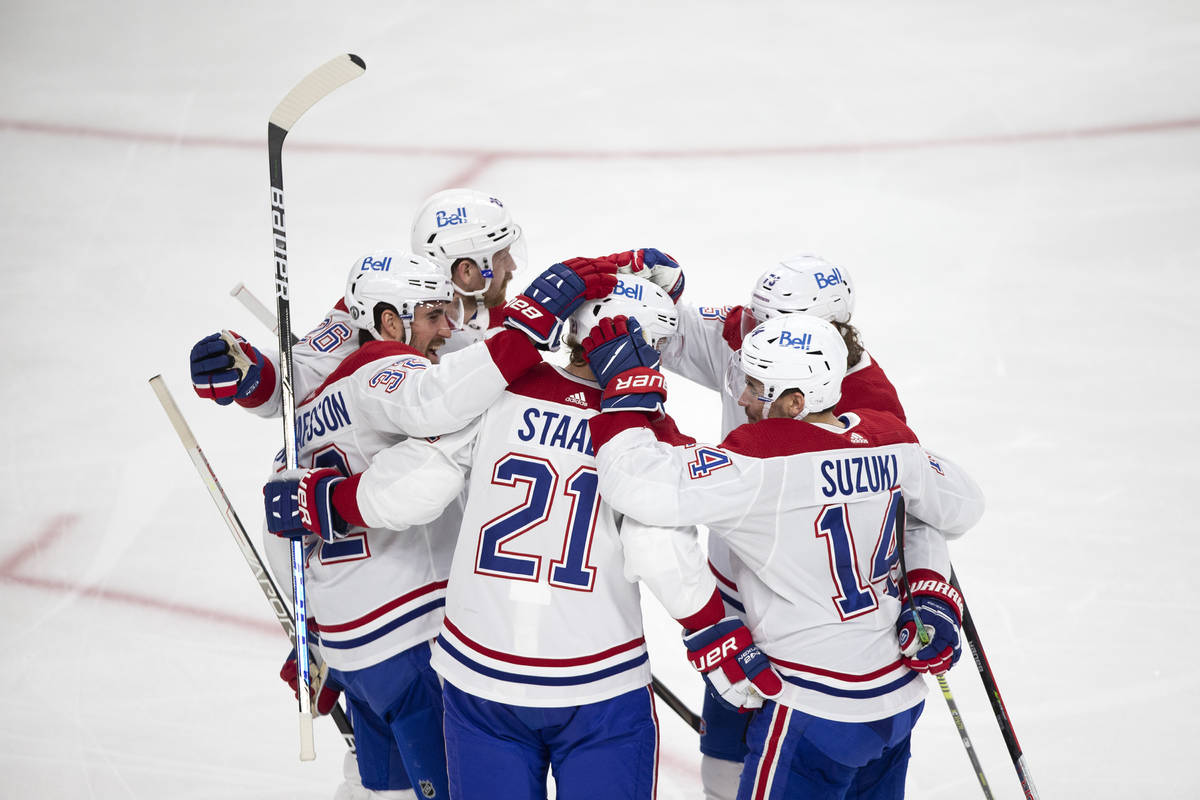 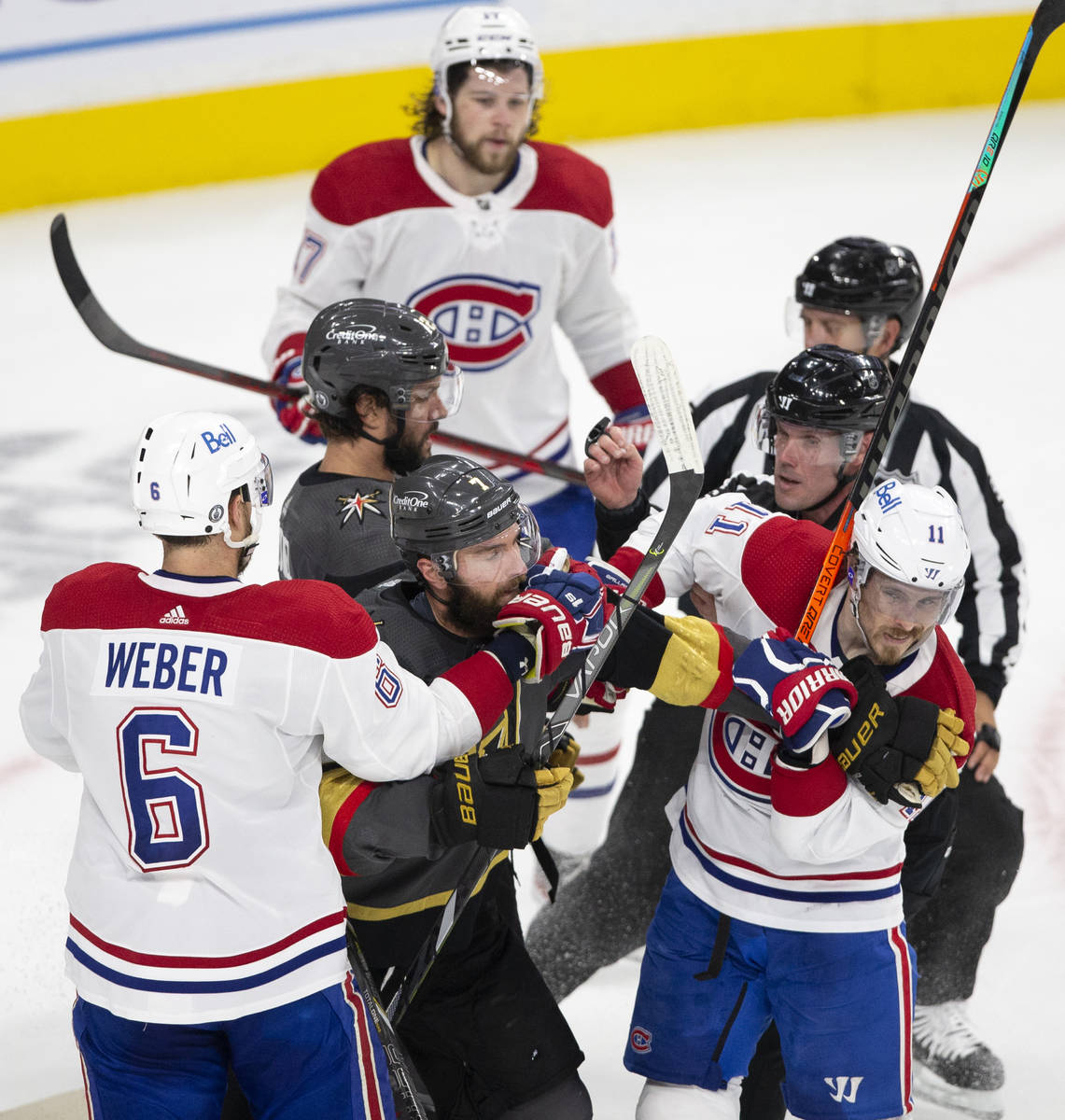 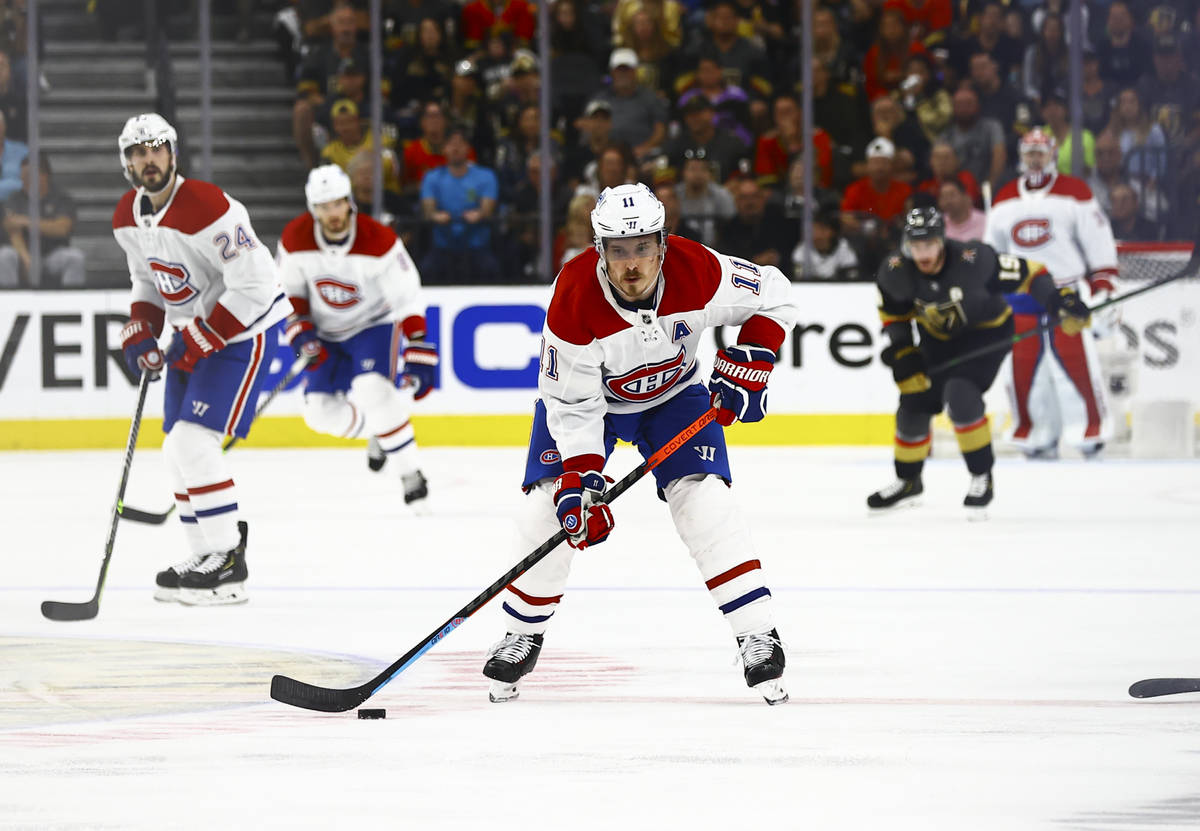 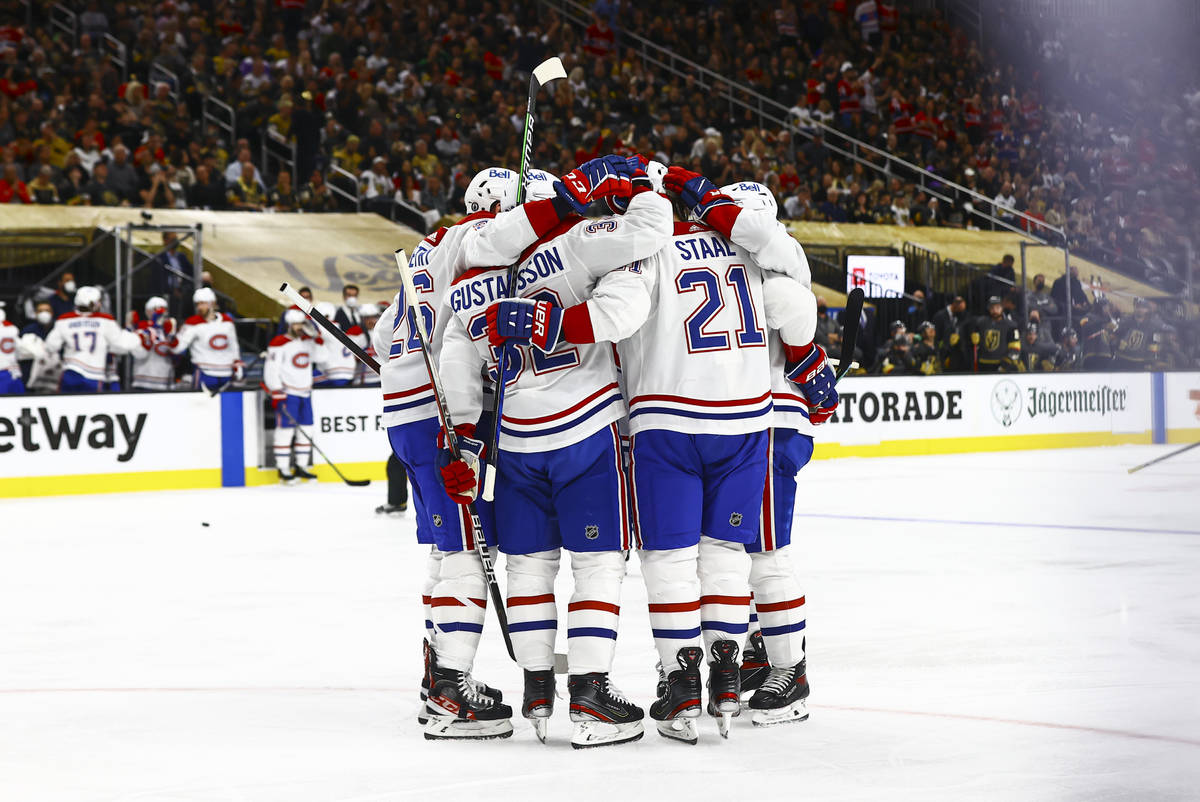 The Montreal Canadiens celebrate their first goal of the second period of Game 5 of an NHL hockey Stanley Cup semifinal playoff series against the Golden Knights at T-Mobile Arena in Las Vegas on Tuesday, June 22, 2021. (Chase Stevens/Las Vegas Review-Journal) @csstevensphoto

The talented young core of the Canadiens has been on full display during their unexpected NHL playoff run, and Tuesday night was no exception in a 4-1 win over the Golden Knights at T-Mobile Arena.

Montreal’s veterans also have made their presence felt, as youth and experience have combined to give the Canadiens a 3-2 lead in the best-of-seven Stanley Cup semifinals.

Cole Caufield and Jesperi Kotkaniemi became the sixth teammates 20 or younger to both score in a Stanley Cup semifinal game and the first since Sidney Crosby and Jordan Staal for the Pittsburgh Penguins in 2008.

“They’re so composed as young people, but they’re competitive on the ice,” assistant coach Luke Richardson said of the three. “I think you surround them with the (Shea) Webers, the (Corey) Perrys and the (Eric) Staals, plus the big corps of defensemen out there to help them in our (defensive) zone. It’s a really good mix. The speed and grit and the youth and experience all together is a great combination for this time of year.”

Staal, the older brother of Jordan, scored what proved to be the winning goal in the second period off a sensational feed from Suzuki.

His shot beat Marc-Andre Fleury, the first pick of the 2003 NHL draft. Staal, acquired for the stretch run in March from Buffalo, went second in 2003.

Staal has combined with the other veterans to provide a strong support system for Montreal’s young players.

“It’s huge for us, obviously,” Suzuki said. “They’ve been doing it for a while. Staal was a great addition, and learning from Phil (Danault) the last few years has been unreal. We rely heavily on those guys, and they’ve been special to play with.”

That dynamic, combined with the presence of one of the league’s top goaltenders in Carey Price, has the Canadiens within one game of the Stanley Cup Final for the first time since 1993.

They have two chances to secure that invitation, starting with Game 6 on Thursday in Montreal.

Richardson, 2-1 filling in for interim coach Dominique Ducharme, said the coaching staff will continue relying on the veterans to make sure the team is ready.

“We’re definitely excited by what we’re doing, but we don’t want to get ahead of ourselves,” Richardson said. “We have good experience in the room, and they say the right things. Our leadership really leads this team in the right direction, and the coaching staff and management just support that.”

One of the keys Tuesday was not to panic after Sunday’s Game 4 when the Canadiens controlled the action but lost 2-1 in overtime. Now, they must not get too high.

“Our mindset this whole playoff has been doing what we do regardless of what happens,” Staal said. “We don’t change much. We do what we do every single shift, every opportunity we have to try to make a difference for our team. Oldest cliche in hockey, but the fourth one is going to be the hardest.”