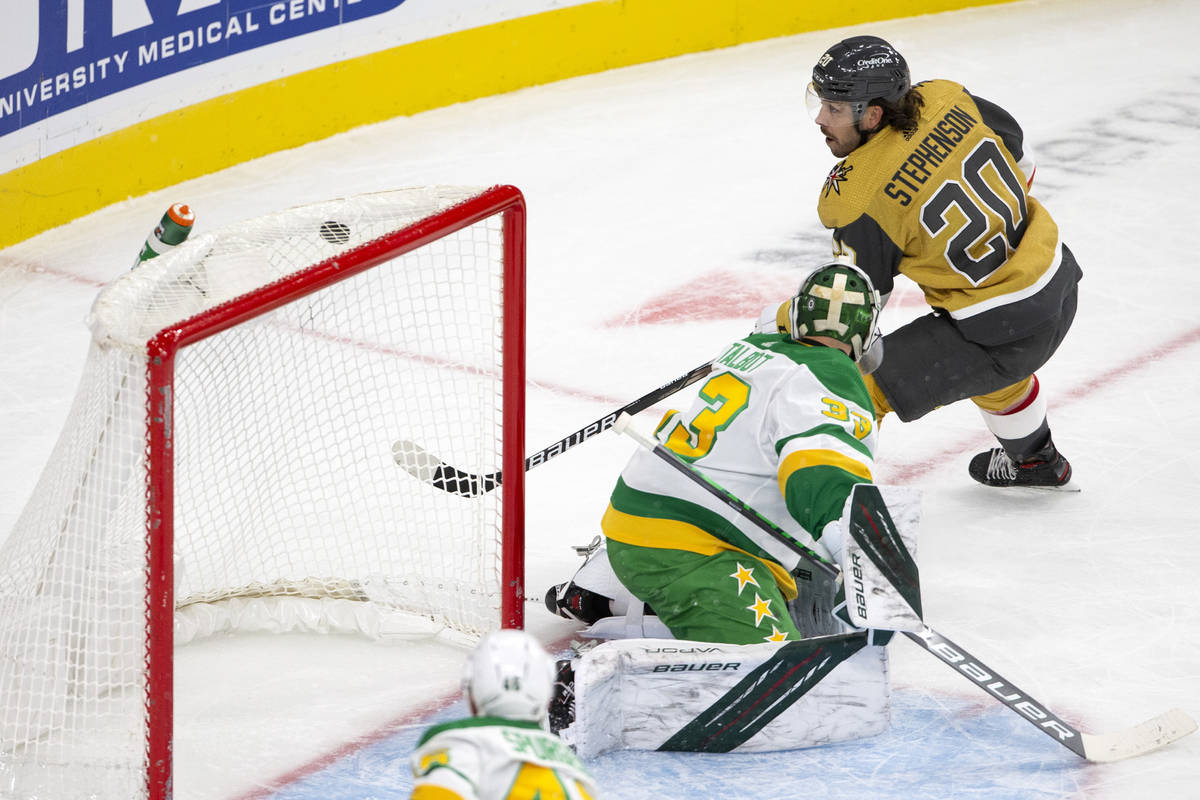 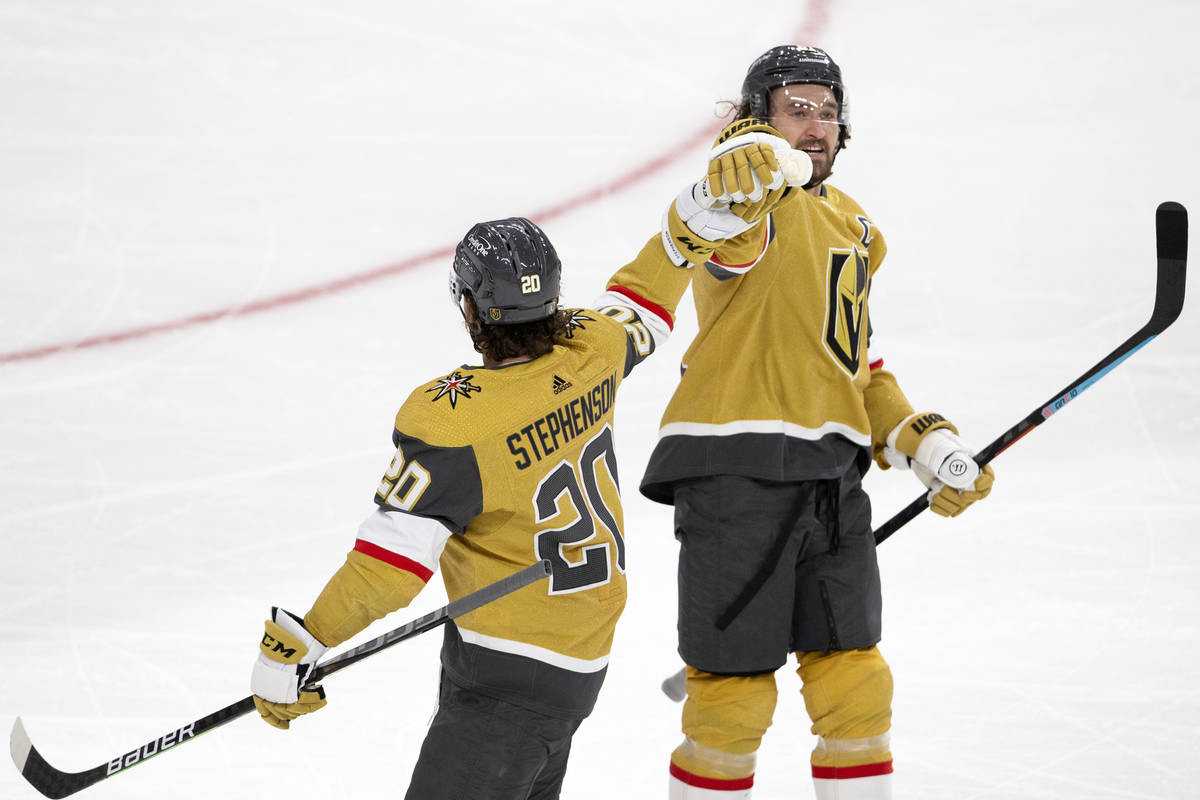 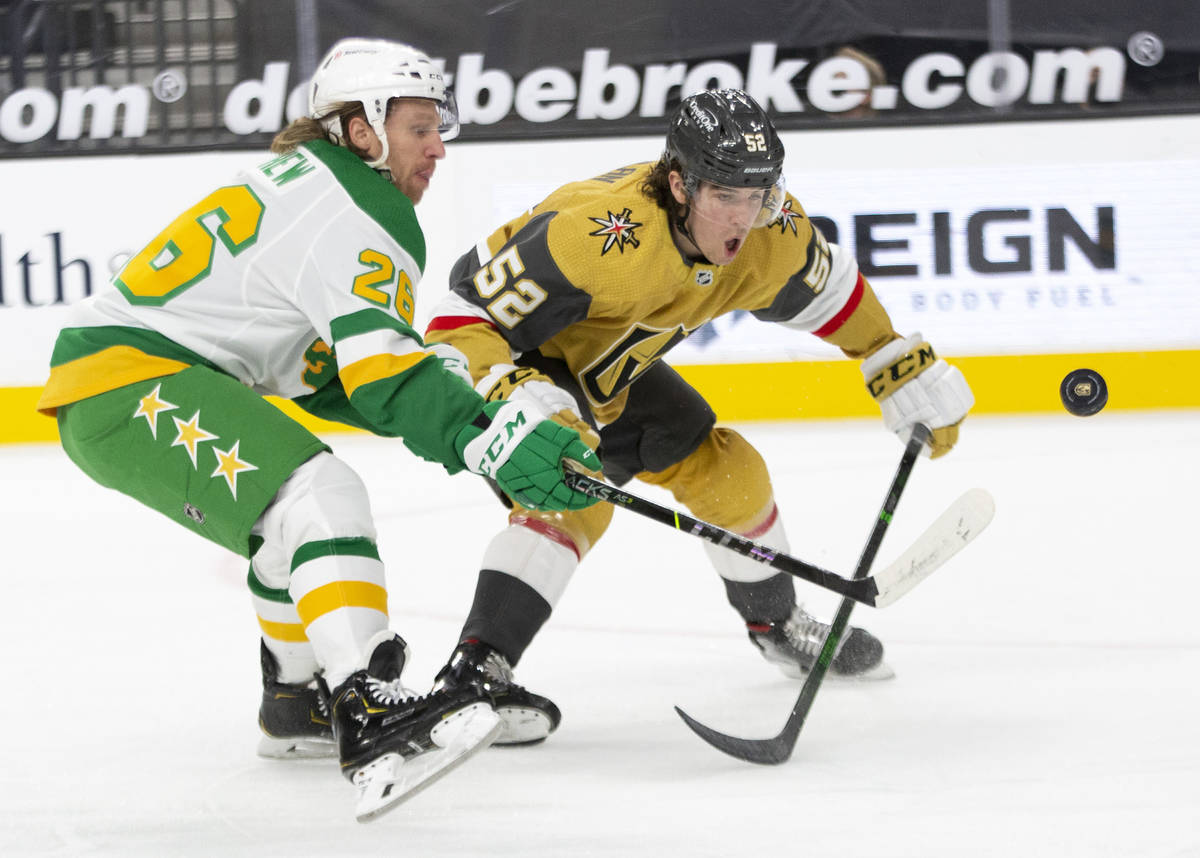 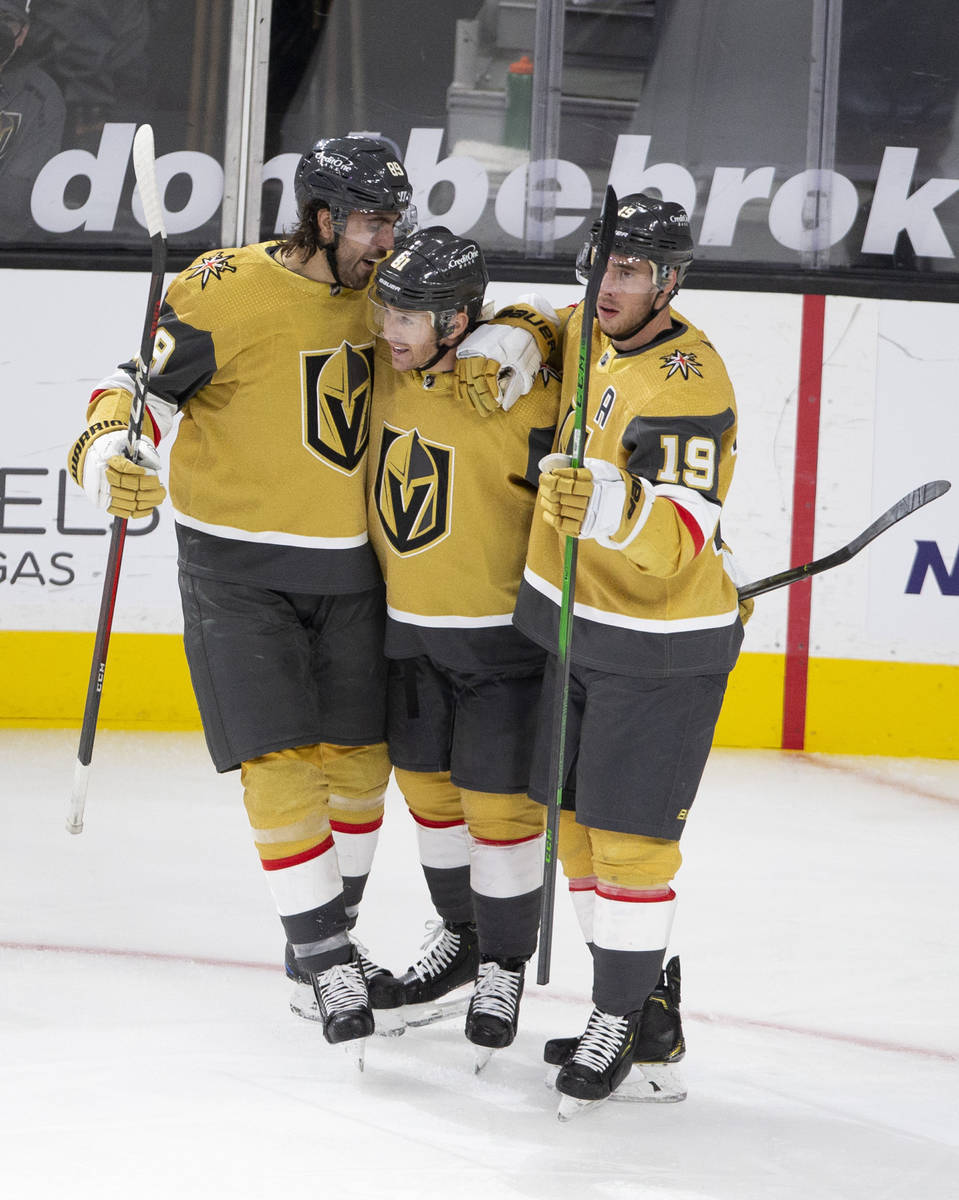 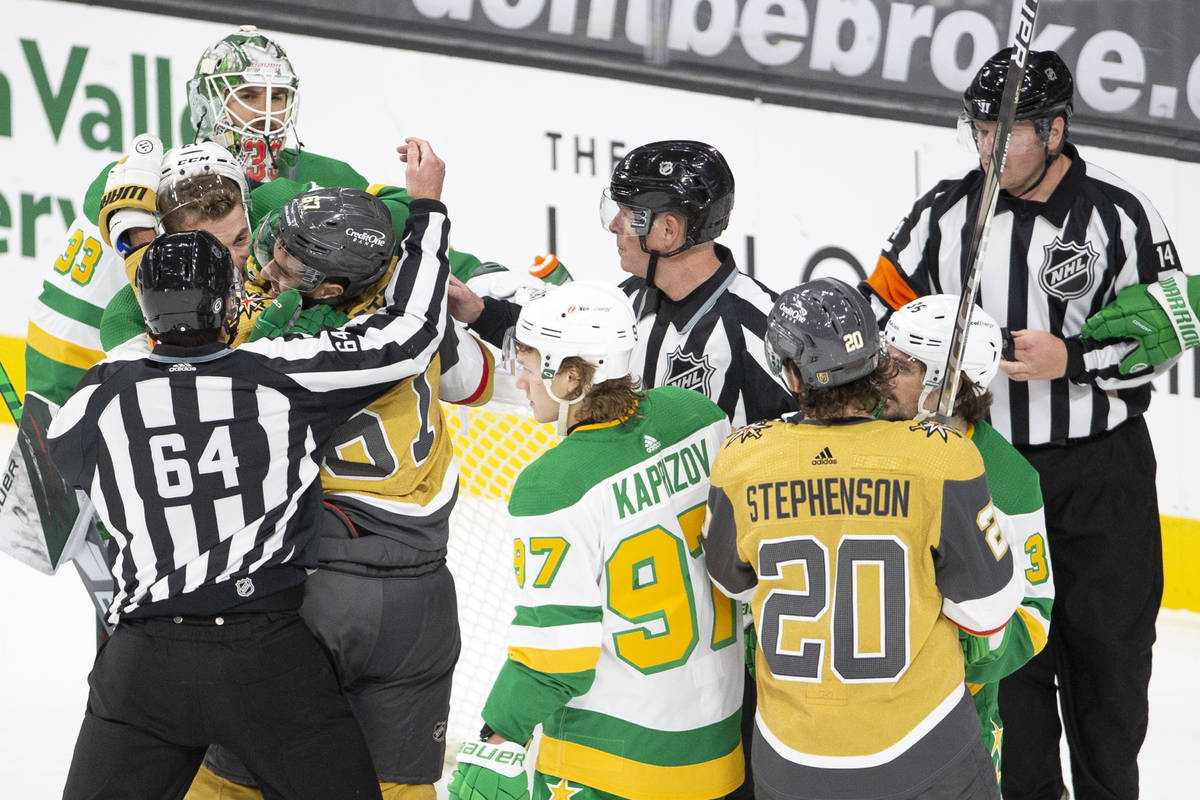 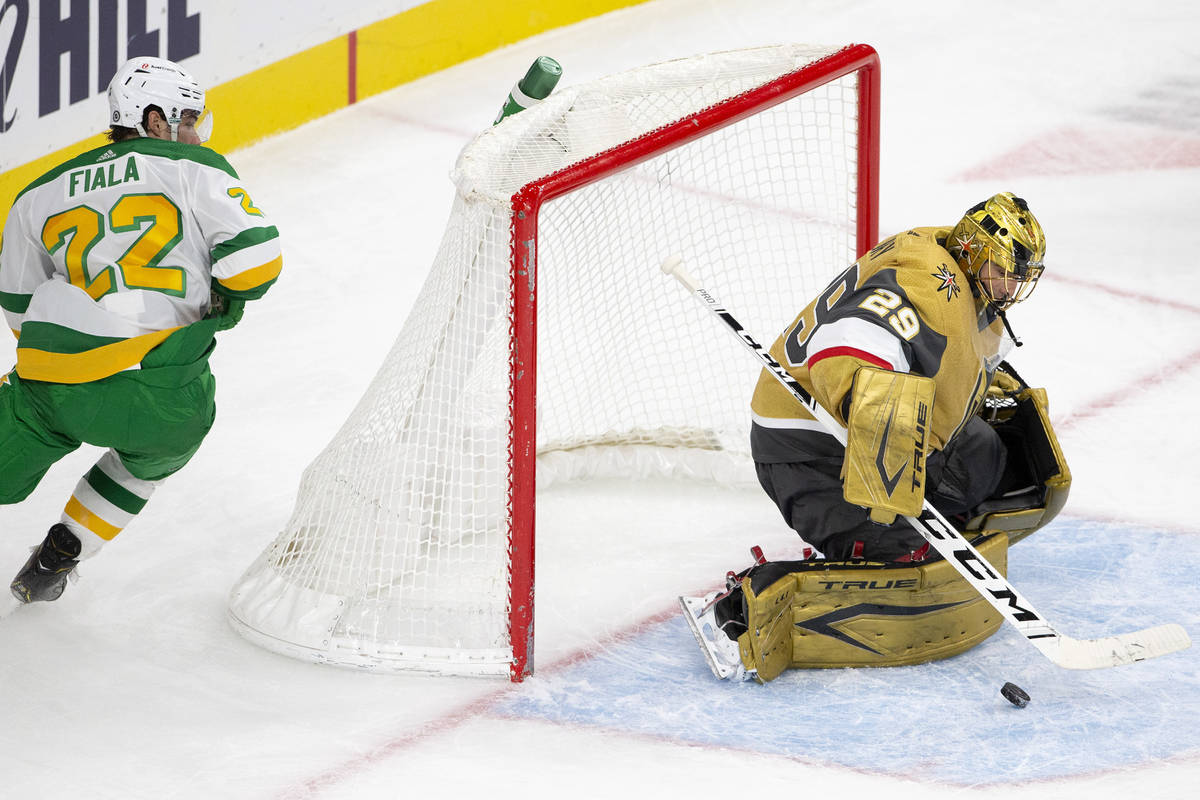 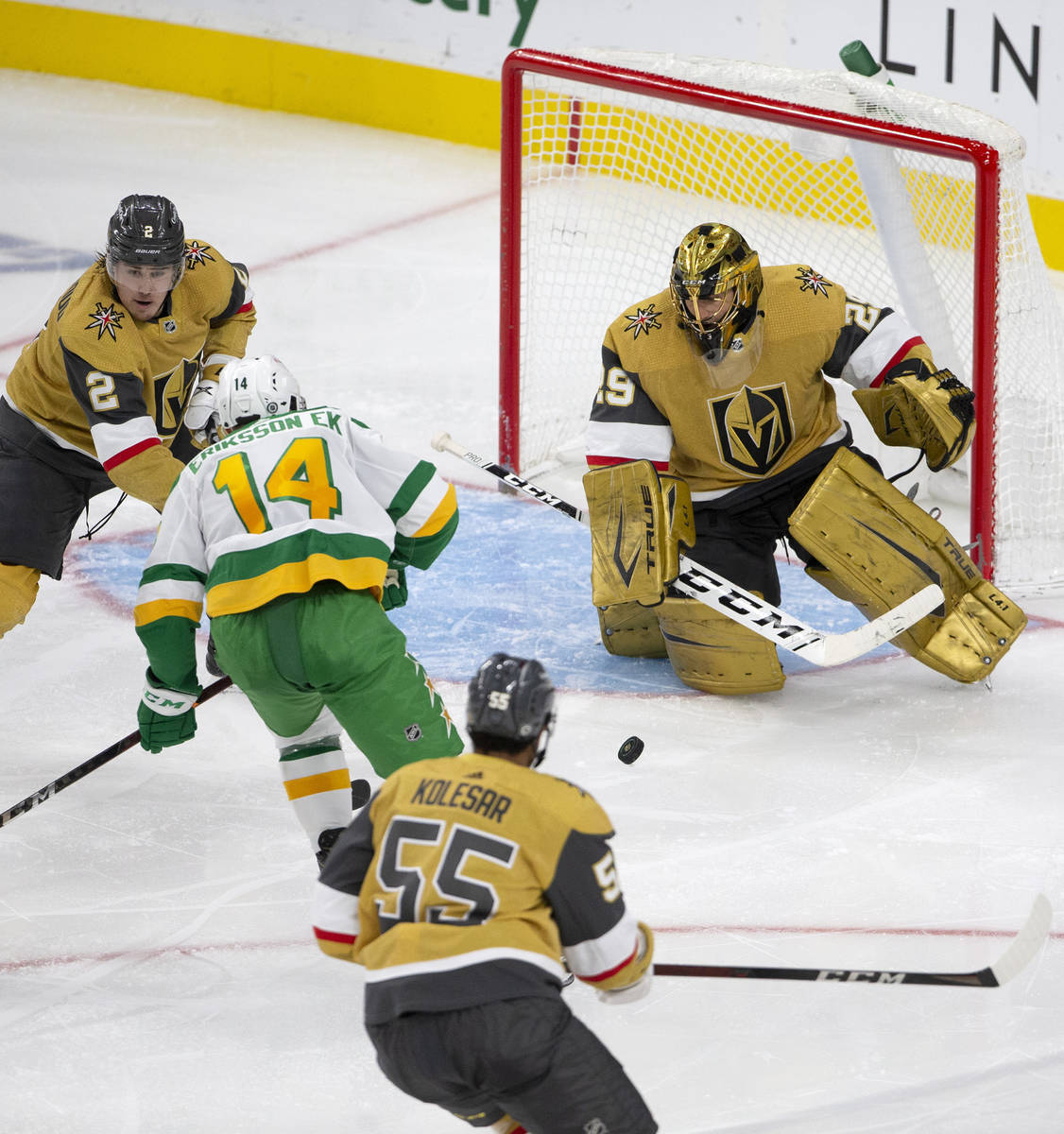 Golden Knights goaltender Marc-Andre Fleury (29) is about to save a shot on goal by Wild center Joel Eriksson Ek (14) during the third period of their NHL hockey game on Wednesday, March 3, 2021, at T-Mobile Arena, in Las Vegas. (Ellen Schmidt/Las Vegas Review-Journal) @ellenschmidttt 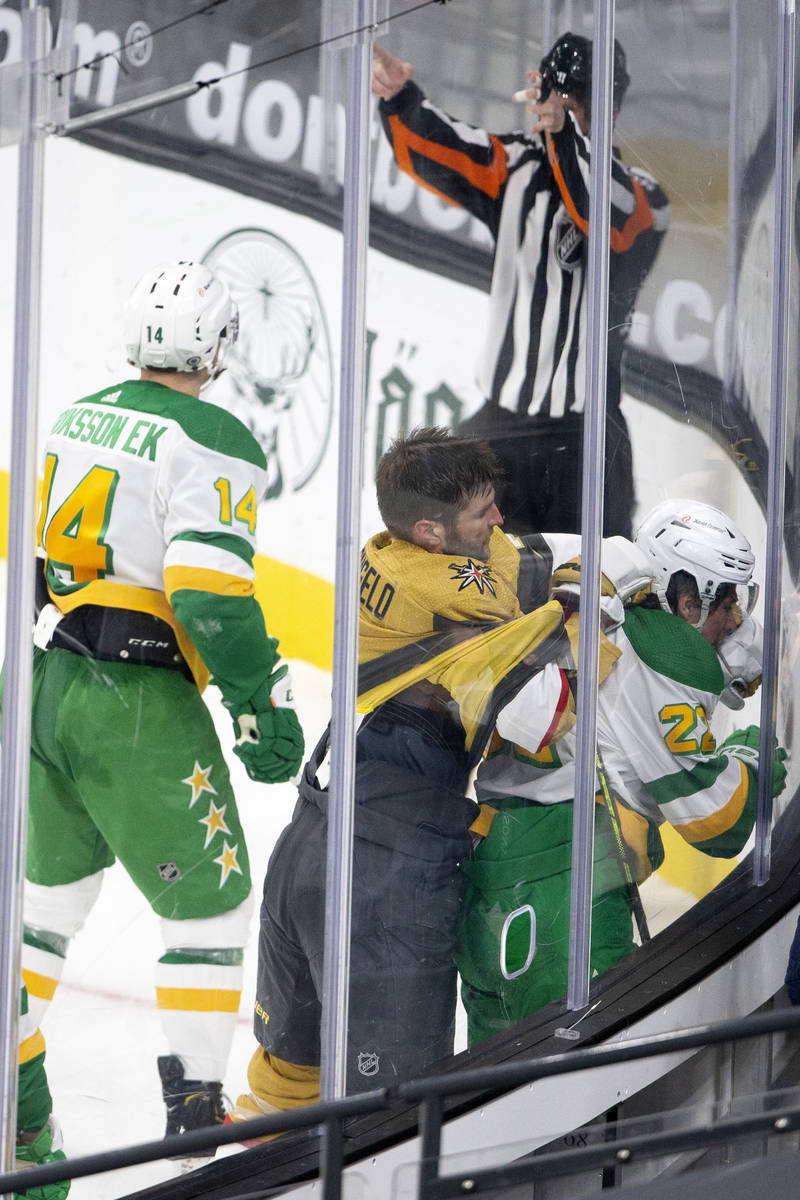 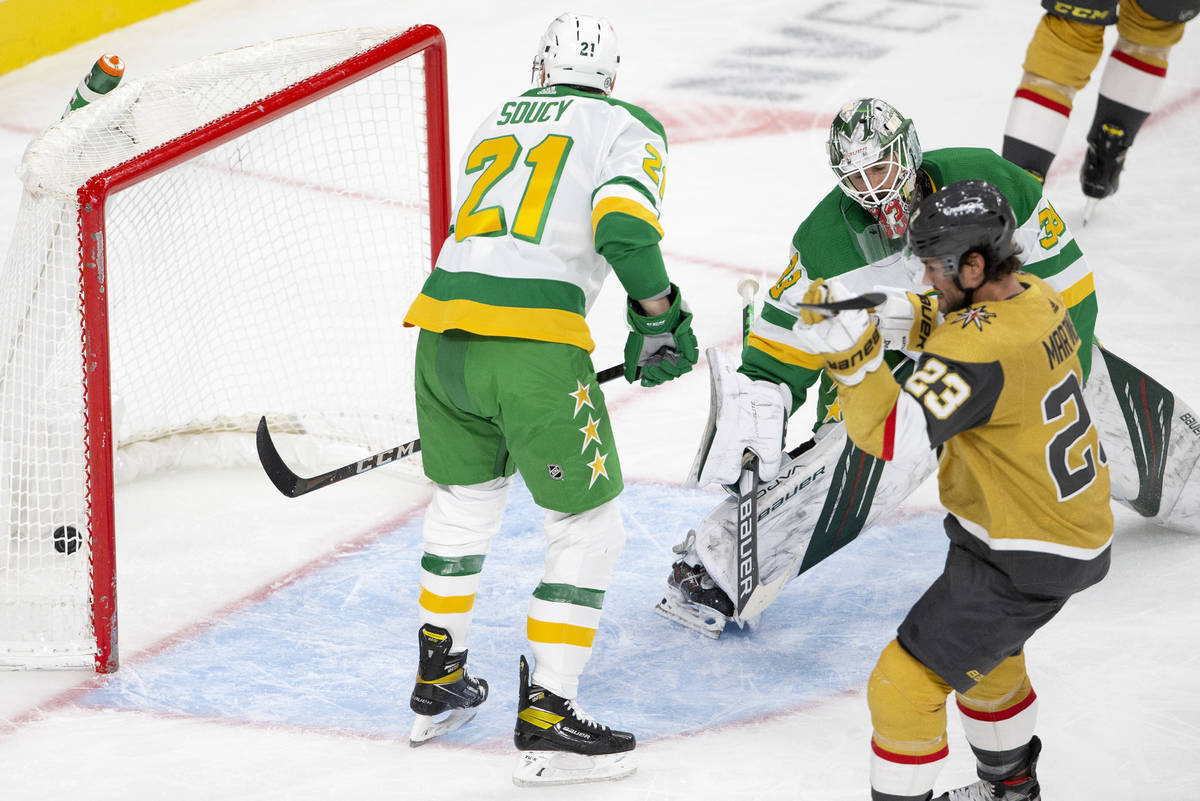 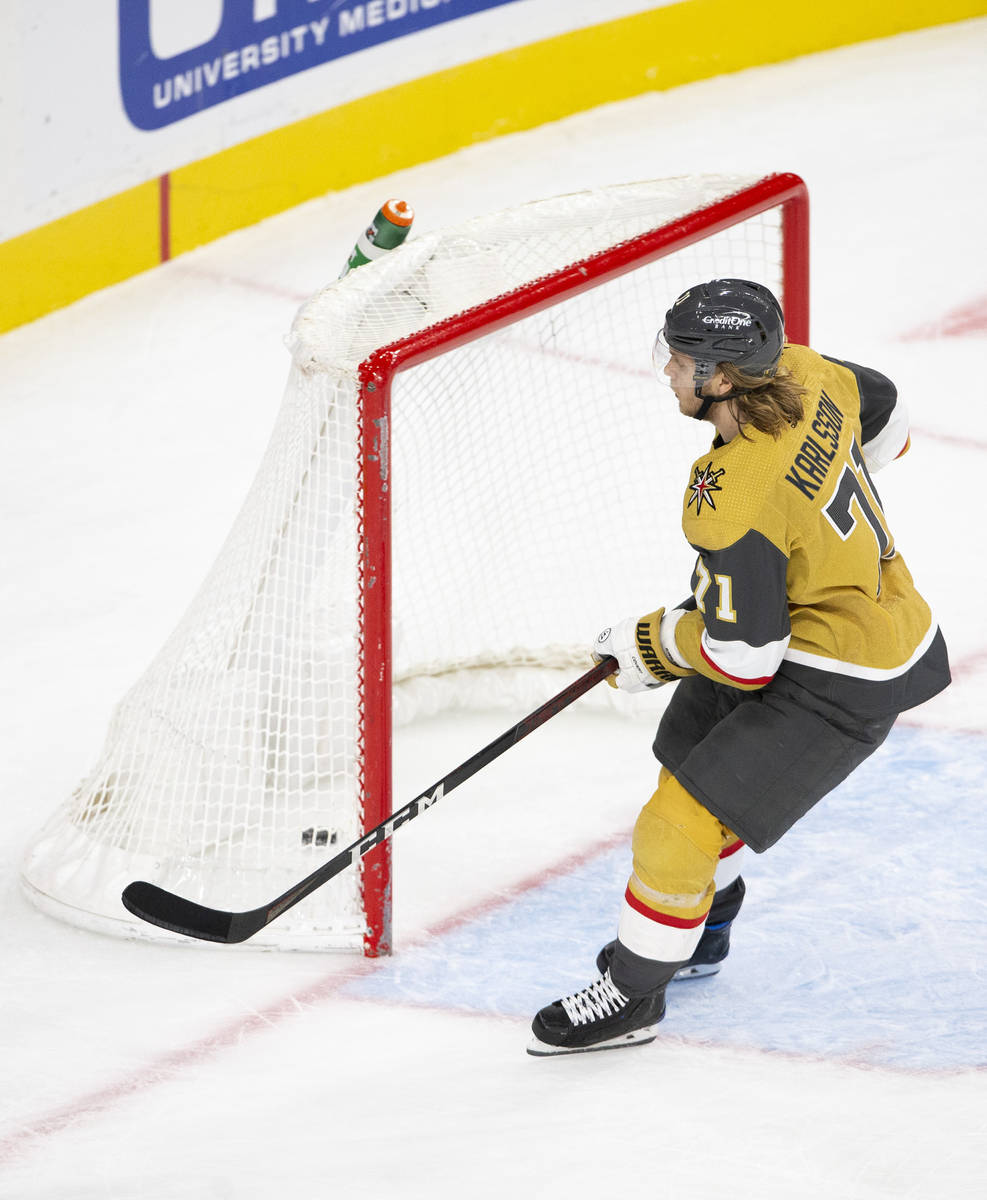 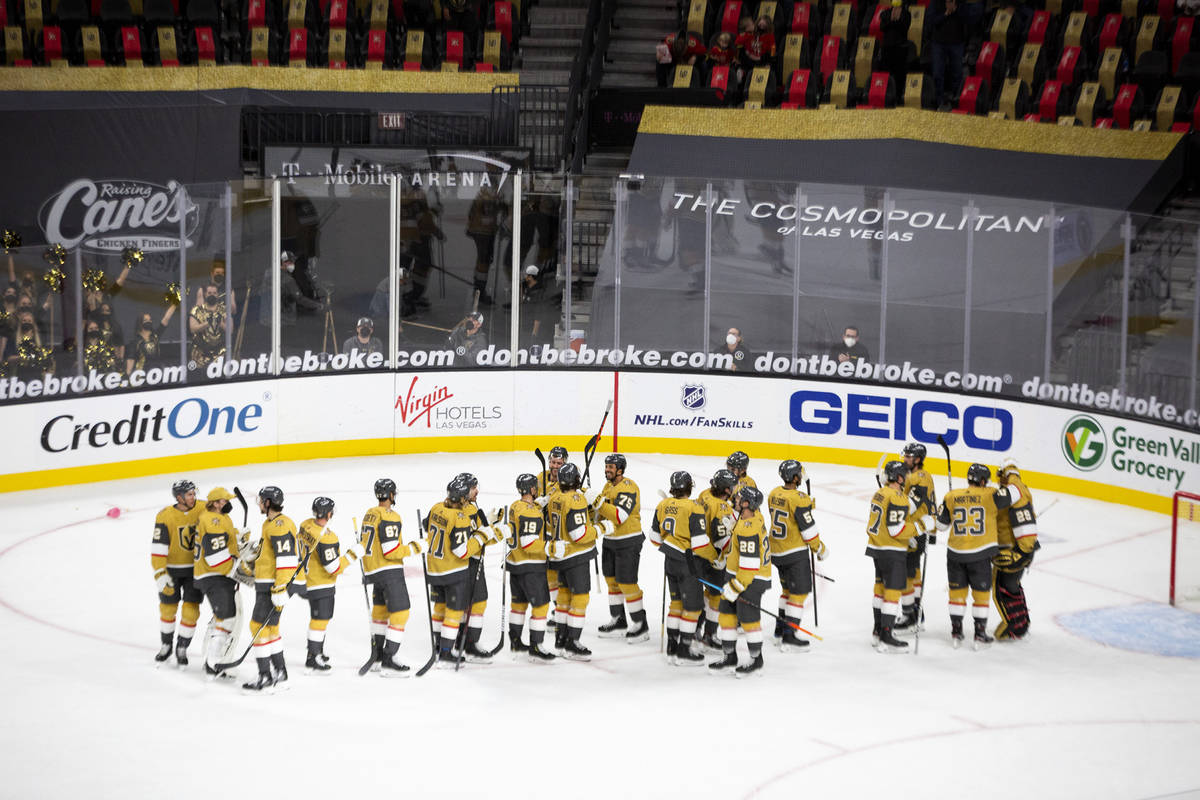 The Golden Knights congratulate each other after winning their NHL hockey game against the Wild on Wednesday, March 3, 2021, at T-Mobile Arena, in Las Vegas. (Ellen Schmidt/Las Vegas Review-Journal) @ellenschmidttt 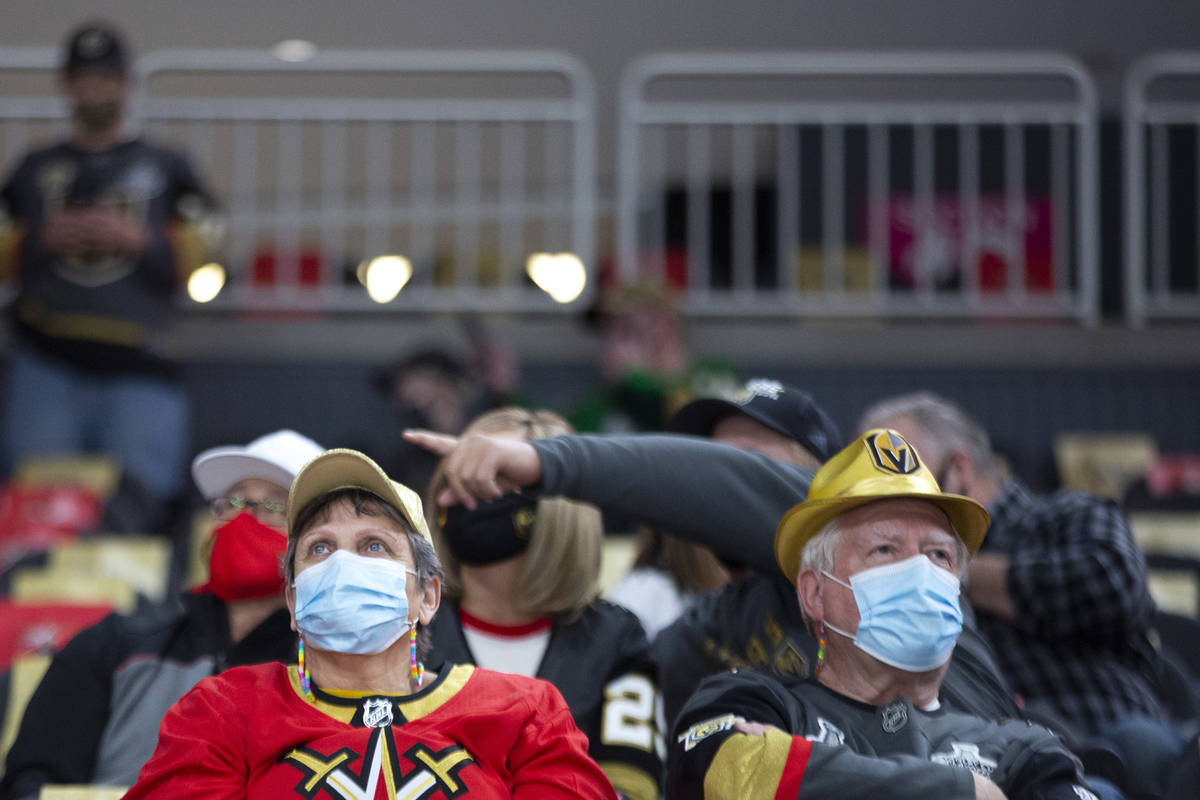 The Golden Knights seem to know what they’re doing with fifth-round picks.

Two of their top forward prospects — Lucas Elvenes and Jack Dugan — were selected in the fifth round. But the team’s masterstroke was sending a 2021 fifth-round pick to the Washington Capitals on Dec. 2, 2019, for Chandler Stephenson.

In exchange for a selection that hasn’t been used yet, the Knights received a center who has played consistently in the top six and amplified the talents of the players around him.

The team’s heist became further evident Wednesday night in its 5-1 win over the Minnesota Wild at T-Mobile Arena. Stephenson had a goal and an assist, giving him more points in his 60-game Knights’ career (34) than in 168 games with the Capitals (33).

“To be in the situation that I’m in now, it’s something that obviously I don’t take lightly,” Stephenson said Wednesday morning. “I feel a lot of trust with the coaches. It’s been unbelievable ever since I came here.”

Stephenson was a role player struggling to carve out his niche in Washington. His opportunities were limited with Nicklas Backstrom and Evgeny Kuznetsov cemented as the Capitals’ top two centers.

The Knights haven’t hesitated to give him extra responsibility. He has been the first-line center all season and excelled between left wing Max Pacioretty and right wing Mark Stone. The team has outscored opponents 15-5 at five-on-five with them on the ice.

Stephenson also showed Wednesday how effective he can be with his team protecting a lead. Not only is he a responsible defensive forward, his speed makes his deadly on the counterattack.

That allowed him to help deliver the knockout blow to Minnesota. The Wild were pushing trailing 2-1 in the third period when Stone grabbed the puck in the defensive zone and started a two-on-one with Stephenson down the ice.

Stephenson used his fast feet to draw defenseman Carson Soucy to him before slipping the puck back to Stone in the slot. The captain buried the feed to make the score 3-1 with 8:52 remaining.

Stephenson showed off his speed again 5:20 later when he raced down the right wing and beat goaltender Cam Talbot with a backhand move. Both goals happened because the Wild were getting aggressive in the offensive zone looking for a goal, and Stephenson burned them going the other way.

“He was everywhere tonight,” coach Pete DeBoer said. “I thought it was one of his best games of the year.”

Not bad for a player once worth only a fifth-round pick. Fifteen months after the trade, Stephenson keeps making it look better and better for the Knights.

“He’s so quick and so explosive,” DeBoer said. “Him and (left wing Alex) Tuch both have that ability to put teams really on their heels.”

The Knights received an outstanding performance from their penalty kill.

The Wild’s last-ranked power play was 0-for-3 and had a particularly frustrating two minutes late. Minnesota had an opportunity to tie the game eight minutes into the third down 2-1 but couldn’t score despite putting five shots on goal.

The Knights scored 1:09 after the power play expired for a 3-1 lead.

“Especially being a one-goal game, we knew we needed to kill that,” Stephenson said. “Good job by everybody.”

The Knights have killed 18 consecutive penalties and 23 of their past 24.

The so-called “Misfit line” started the game with an outstanding shift in which they pinned the Wild back in the defensive zone.

“It definitely helped our mojo but killed (theirs),” Marchessault said.

They kept up that momentum all night. The Knights had a 16-8 edge in shot attempts and 5-2 edge in scoring chances when the three were on the ice at five-on-five.

Tuch scored his fifth goal in the past five games. That includes two games against the Wild, who drafted him in the first round, 18th overall, in 2014.

“I always like playing against the Wild,” Tuch said. “We haven’t had too much success in the past, but this year so far 2-0. It’s been a lot of fun beating them.”

Tuch has nine goals in 19 games. He had eight in 42 games last season.