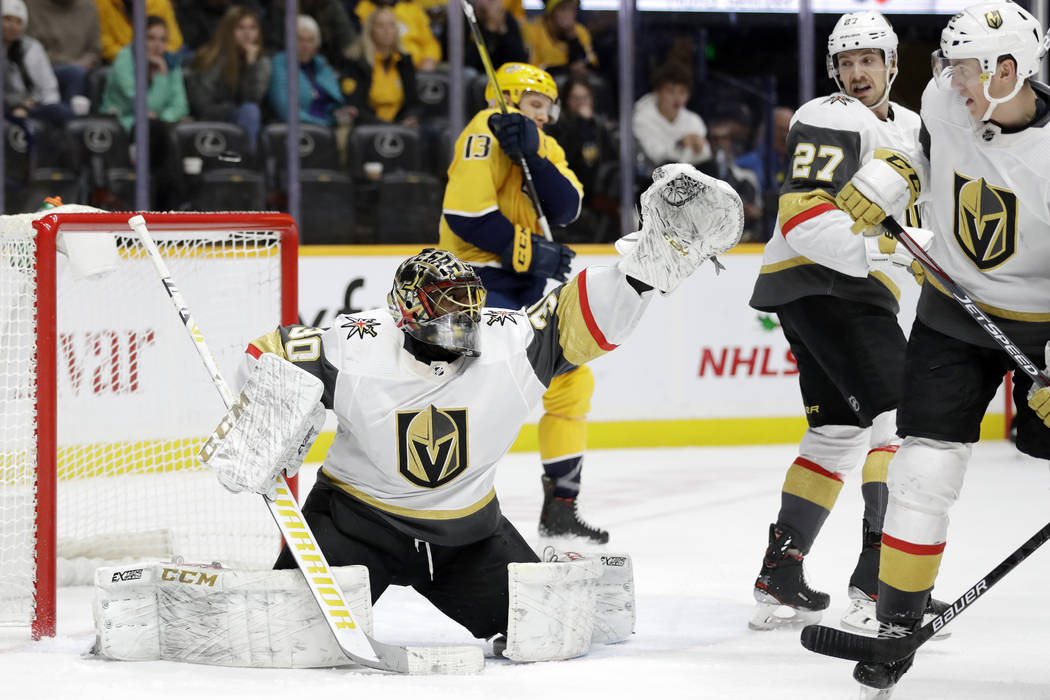 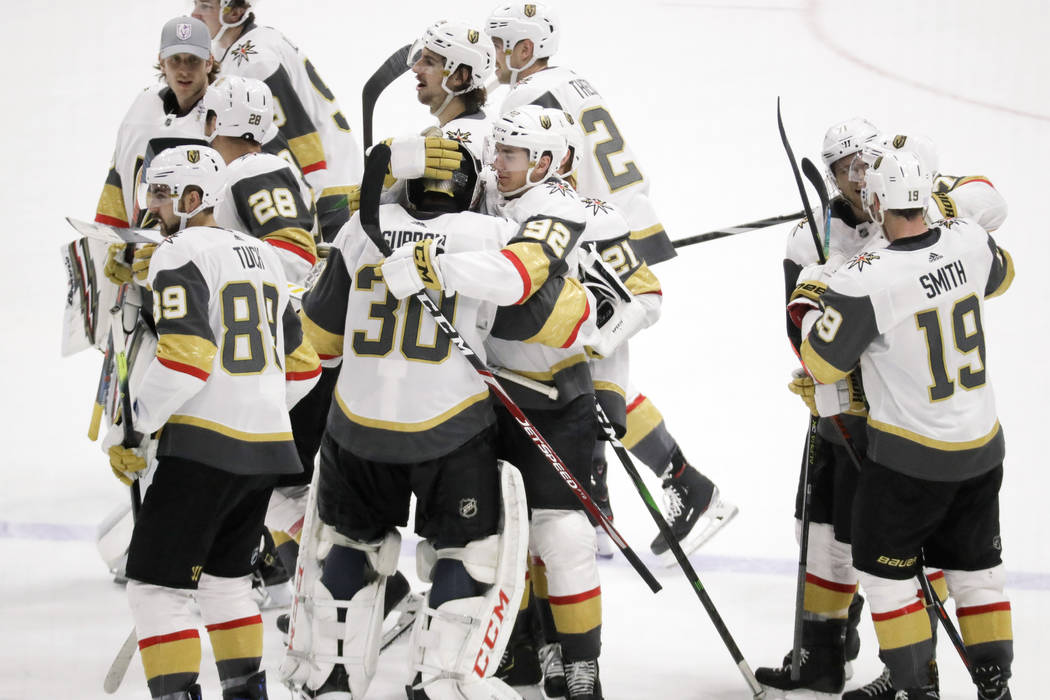 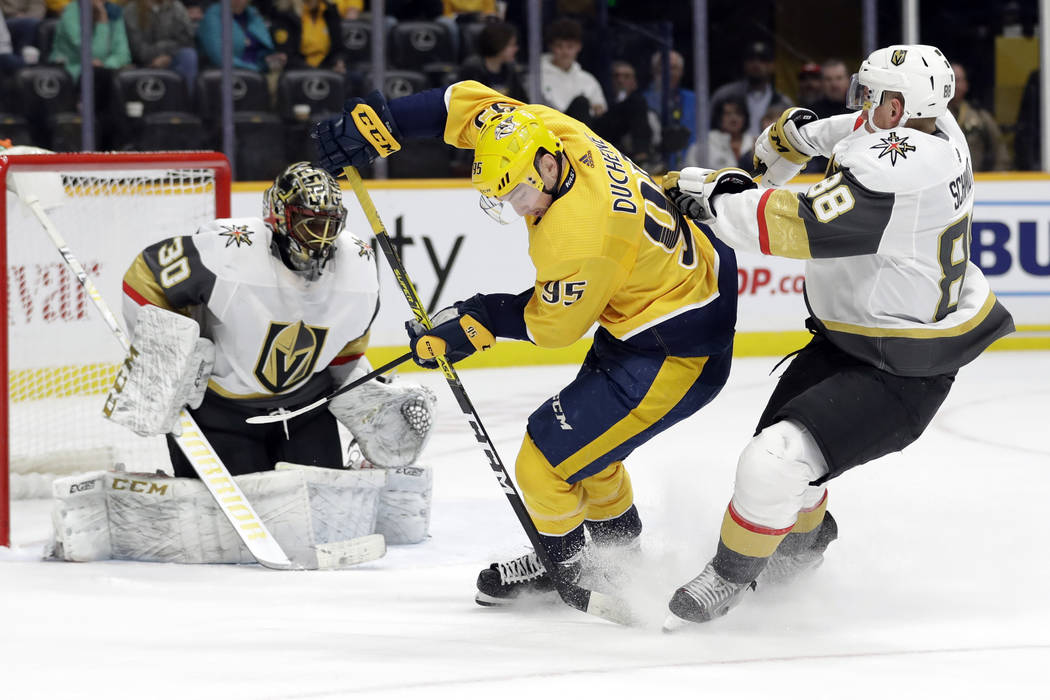 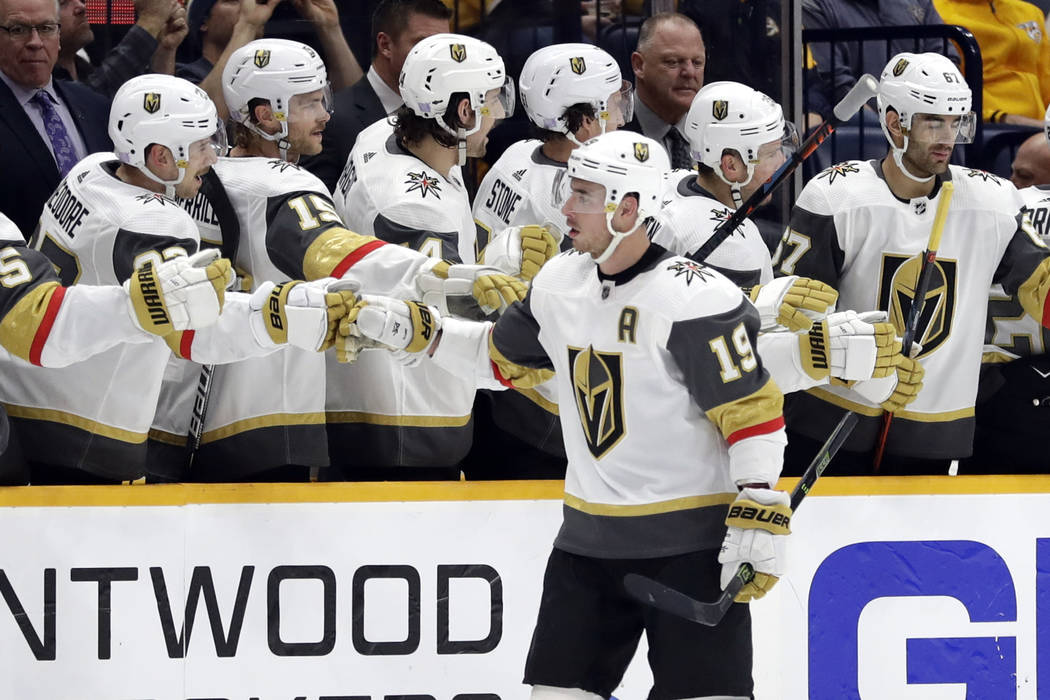 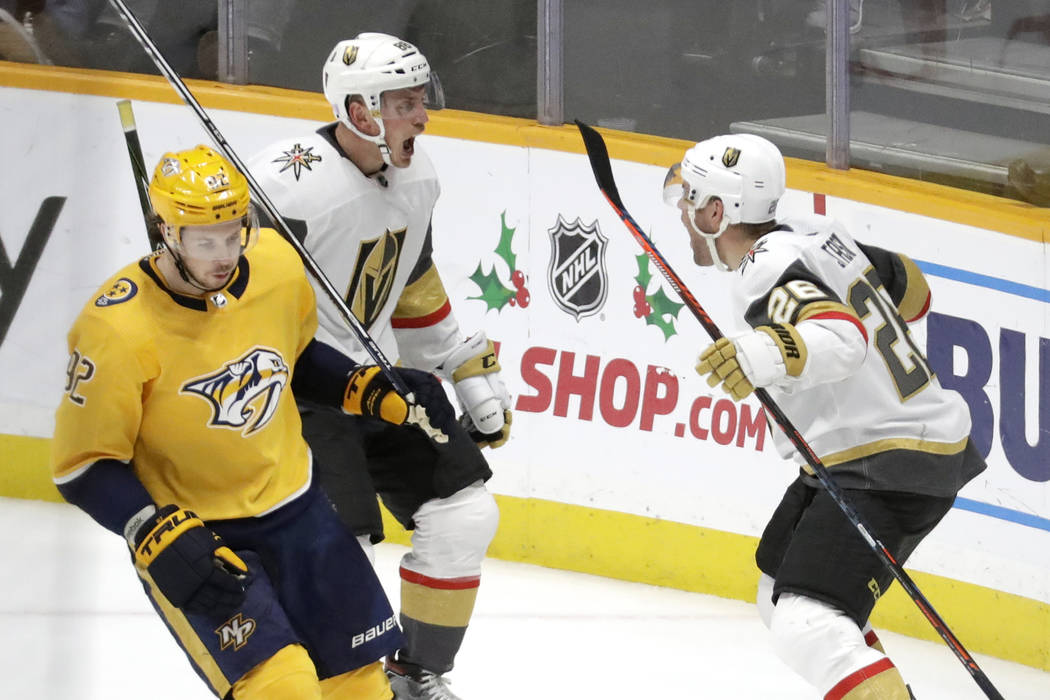 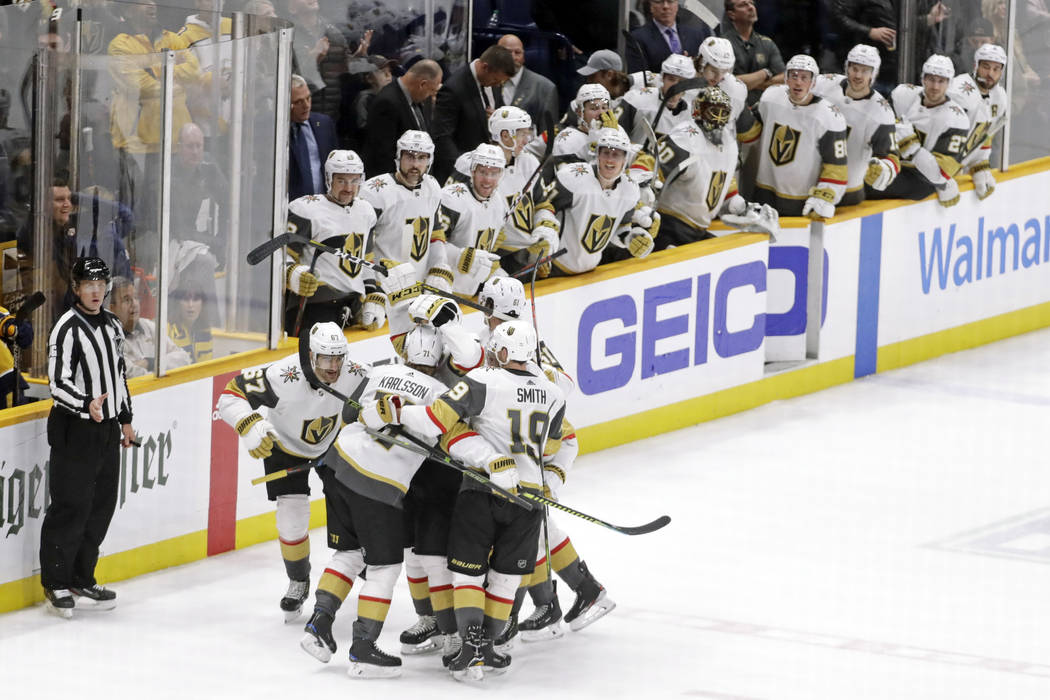 Vegas Golden Knights players celebrate after Max Pacioretty scored the tying goal against the Nashville Predators with under one second remaining in the third period of an NHL hockey game Wednesday, Nov. 27, 2019, in Nashville, Tenn. The Golden Knights won 4-3 in overtime. (AP Photo/Mark Humphrey) 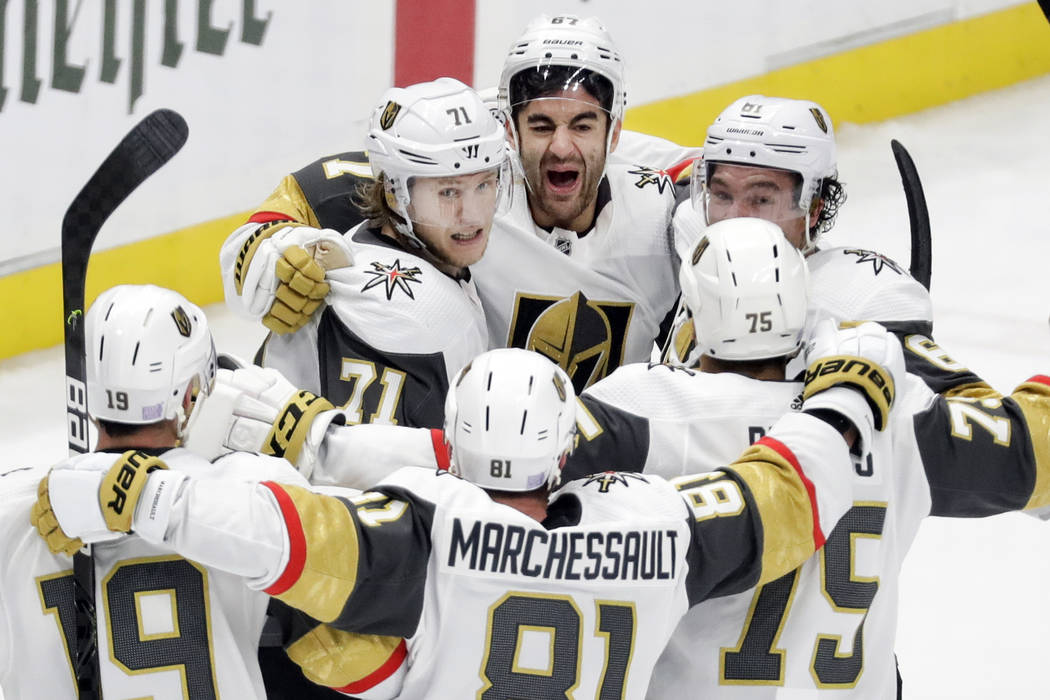 Vegas Golden Knights left wing Max Pacioretty (67), top center, celebrates with teammates after scoring the tying goal against the Nashville Predators with under one second remaining in the third period of an NHL hockey game Wednesday, Nov. 27, 2019, in Nashville, Tenn. The Golden Knights won 4-3 in overtime. (AP Photo/Mark Humphrey) 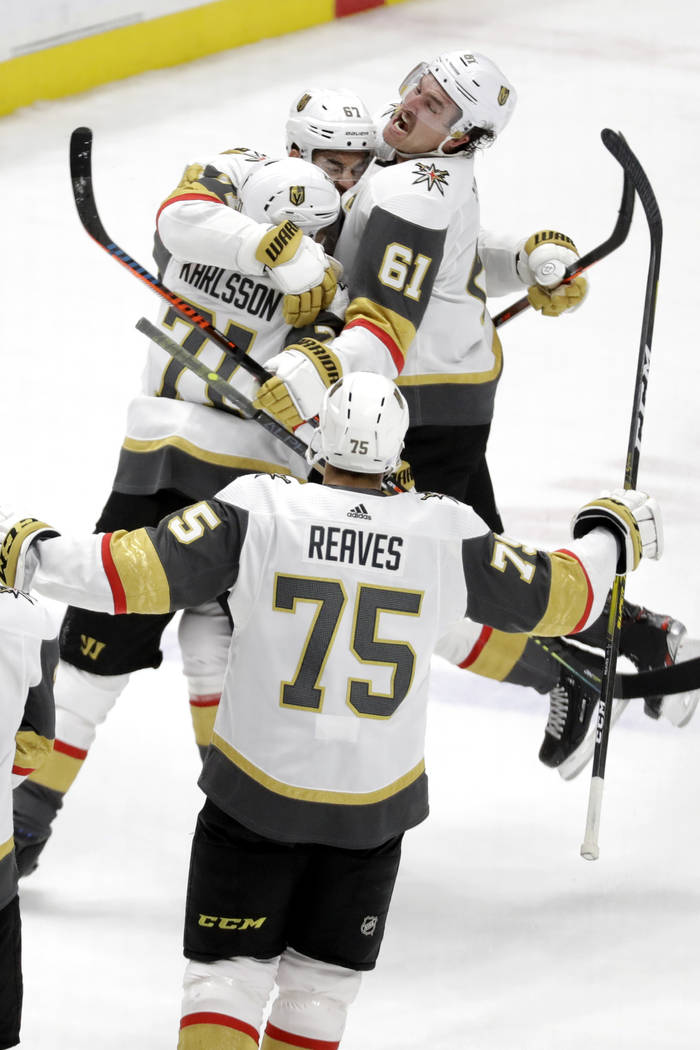 Go ahead and draw a line on the Golden Knights’ schedule between game Nos. 26 and 27.

The first part, which lasted until Nov. 27, is B.C. (before change). And everything since shall henceforth be referred to A.C. (after change).

That’s when coach Gerard Gallant put his pride aside before a late November game at Nashville and switched to a zone-coverage scheme in the defensive zone.

The move proved to be the turning point for the Knights, who are 9-3-2 A.C. and enter Friday’s game at Anaheim tied in points atop the Pacific Division standings with Arizona.

“The game adapts and changes so much that you see what other teams are doing, what makes them successful,” center Paul Stastny said. “You kind of take an idea from them and try it out. You need the personnel as well, and you’ve got to be able to teach it the right way. Sometimes it’s hard to do it midseason, but that’s what the top people do is they evolve on the fly.”

Gallant used many of the same systems throughout his coaching career and won the Jack Adams Award as the league’s coach of the year after guiding the Knights to the Stanley Cup Final in their inaugural season.

His teams are known for an aggressive 1-2-2 forecheck and man-on-man defensive coverage.

But Gallant recognized the Knights weren’t as quick as their first two seasons and were allowing too many quality scoring chances. After a 4-2 loss at Dallas on Nov. 25 dropped the Knights to 11-11-4, he made the defensive adjustment permanent.

“You sit around in your coaches meeting in the summertime and you say, ‘What made St. Louis win? What made Boston so successful? And do you want to tweak your stuff?’ ” Gallant said. “Stubborn me said, ‘No, we’re not going to do a whole lot. We like what we’ve done. We got to the finals. We had a real good playoffs last year and unfortunately lost in seven games.’

“It’s tough to change things 20 games into the season. You want to make sure your players believe in it. It’s worked out pretty well.”

In the Knights’ previous system, each player was responsible for coverage of their man no matter where he went in the zone. The scheme was successful, with the Knights ranked in the top 10 in goals allowed per game each of the past two seasons.

But the Knights were getting hemmed in their own zone more frequently the first 26 games, which led to more puck chasing. That, in turn, wore out the Knights and prevented them from transitioning quickly once they regained possession of the puck.

Now, each player is responsible for a quadrant in the defensive zone, while the centermen are free to support the puck and start the breakout.

“There’s less running around,” defensemen Brayden McNabb said. “You more protect the middle, always come back to the house (front of the net). For that, we’re not out of position. We find it really helps for our wingers and forwards that they’re always in their spot, so if we get a chance to kill a play and move the puck, we always know that we’re going to have guys in their spots.”

Before the change, the Knights had a minus-2 goal differential (77-75), and their 2.96 goals allowed per game ranked 14th in the league. The goals allowed has remained steady despite a pair of lopsided loss to the Rangers (5-0) and Avalanche (7-3).

But the new scheme has had a bigger effect on the offense.

In the past 14 games, the Knights’ scoring is up to 3.14 per game and their ability to more easily transition from defense to offense has sped up their play.